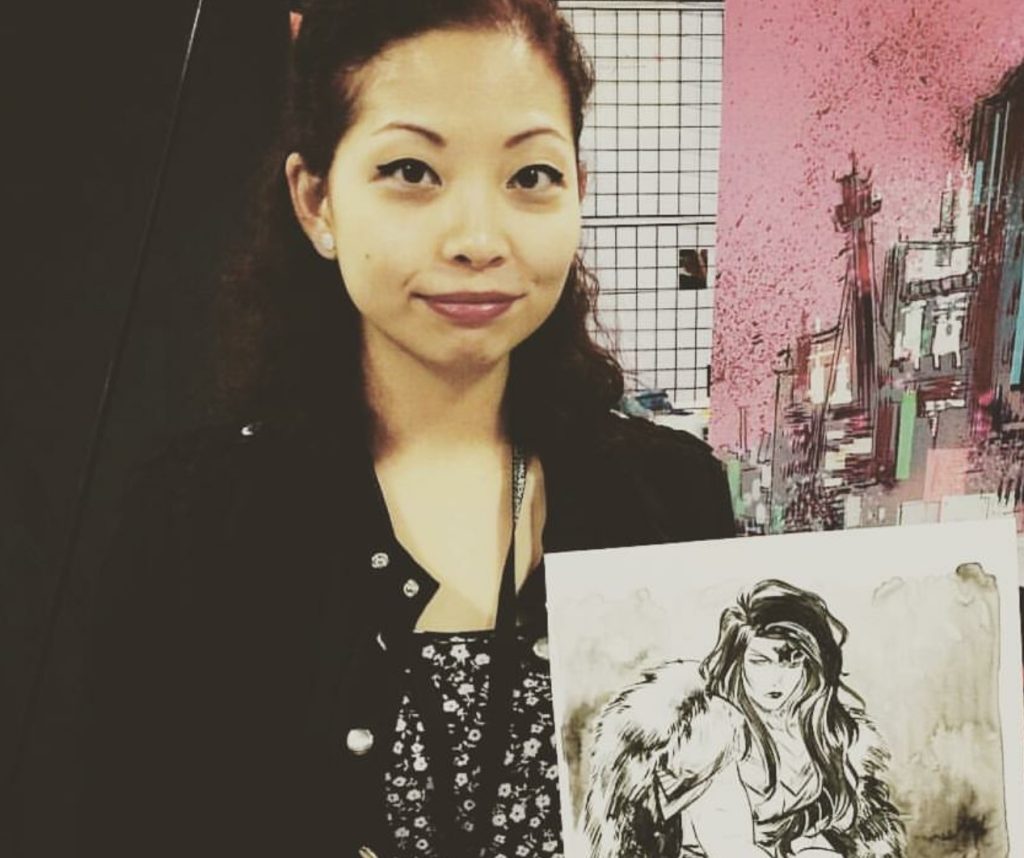 One of the great things about getting to write about the current comic book releases is learning about great talent who you might not have been aware of. For me, this included the works of Soo Lee. Miss Lee has worked for various publications during her young career. These are diverse as Analog Sci-Fi Magazine, and SIERRA Magazine, as well as multiple comic companies. AHOY, Dynamite, AfterShock, Valiant, Black Mask, Chapterhouse, BOOM, Action Lab Entertainment, Oni Press and Image Comics are among the many companies taking advantage of her prodigious talents.

Most recently, she has worked on the Ahoy Comics Series Ash and Thorn. Issue One was recently released on June 24th, with the next issue scheduled for release July 8th. With that in mind, we are pleased to talk to the artist behind this popular series, the very talented Soo Lee.

GVL: As I stated in my opening, I was not really familiar with your work before we reviewed Ash and Thorn. But needless to say, I have been impressed. But try as I could, I didn’t really find a lot about your background. So when did you first take an interest in art, and when did you realize that drawing for comic books is something you wanted to do?

SL: My plan to be mysterious seems to be working! I was interested in drawing for a very long time and went to art school for most of my life. I think I knew I wanted to draw comic books since High School and pursued it ever since.

GVL: As you advanced in your art career, had you read any comic books and did you have anyone whose style you admired or perhaps emulated?

SL: I read comics all my life, from manga to western comics, I was always a fan. I had so many artists I’ve looked up to so it’s really hard to say. I really love works from Yoshitaka Amano, Tatsuyuki Tanaka, to Juan Gimenez, Mobieus, David Mazzucchelli and Frank Quitely. I can keep naming them! I honestly don’t know who I emulate, maybe because I don’t want to offend anybody. Hah.

GVL: I see diplomacy was also a skill you picked up in your studies. 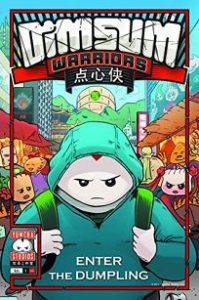 GVL: What was your first professional job and how that come about?

SL: I’m assuming you mean, professional Comics job? I drew a children’s multilingual comic book series called Dim Sum Warriors. It was something I got out of a recommendation right out of school.

GVL: Was there a person early in your career whose opinion you valued or a mentor that took an interest in your work?

SL: For college, I had Klaus Janson for my comics class. He was super tough but the best teacher i’ve ever had, even though my artwork was so terrible back then. But I really take a lot of his lessons to heart and try to get better every time I draw a book, and I have him in the back of my mind every time I draw. I really do still look up to him a lot. 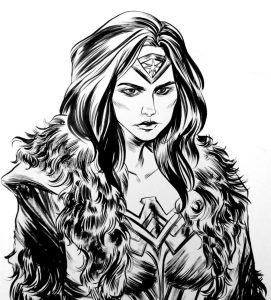 GVL: I recently watched a Twitch demo you did of Wonder Woman using basically nothing but a brush. (I was so jealous of your control). Is the brush your preferred medium to use and how did you develop such control?

SL: Oh I’m so embarrassed now! (Even though I know I’m putting myself in the public eye!) I started using brushes during Klaus’ class. I experimented with nibs and pens but brushes were the only tools I didn’t suck too much with, so I just ran with it. I’ve gone back to using some nibs and pens for backgrounds but it’s mainly a brush. At this point I think it’s just muscle memory and it feels like I’m painting so I enjoy that. I even use brushes in conventions. It’s messy but easier for me.

GVL: Speaking of your demo, it was a traditionally drawn piece. Is that your preferred way to work or do you work digitally on some projects?

SL: There’s very rarely anything I work digital on. I draw and ink traditionally and just about everything is on paper. The only times I draw digitally is coloring, when I’m sketching, or laying out pages. I don’t have the same control so I can’t do a clean finished piece digitally. I wish I did, it would probably save me a lot more money and time if I drew digitally! 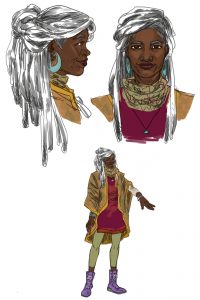 GVL: I understand that Editor Sarah Litt originally approached you to work on the title. What was her sales pitch to get you to agree to take on the project? Did you meet with writer Mariah McCourt before accepting the job?

SL: It feels like so long ago since Sarah and I met! Honestly, just the genre and characters especially, really sold me. It was something different than what I’ve done so far and I really fell in love with these characters. I met Mariah and Sarah both online and I think we really clicked as we talked about the ideas we had for this series and I gotta say, it was so easy to work with them.

GVL: You are part of an All-Star team of talented creators, (Mariah McCourt, Pippa Bowland, Sarah Litt, and Jill Thompson) that just happen to be women. Was this aspect important to you or was it just another job with a brilliant team.

SL: Oh absolutely! It’s a series with an all women lead so who else would know them better than, well, women? Women are part of the marginalized voices in comics so to have a team composed of entirely women is important and even more so now, with what’s been going on in the industry. I’m just very lucky to be a name alongside these amazing creators.

GVL: In my interview with Miss McCourt, she expressed the desire to continue the story of Ash and Thorn after the initial 5 book series. If this comes to fruition, would you sign on to this project?

SL: You don’t have to ask me twice!

SL: This is a hard question to answer because there are so many dream jobs! I love a lot of the DC comics b-list characters, I would love a crack at some of them. I also really wanted to draw their Elseworlds when they were still making those. I’m also a big fan of B.P.R.D as well. But really if there ever was a dream job, it would be a book I could do whatever I wanted on, haha.

GVL: Do you have any projects on the horizon that you would want our readers to know about?

SL: Nothing solid yet!

GVL: Thank you so much for spending some time with us. We will be following your work on the next issue of Ash and Thorn when it comes out on July 8th.

SL: Thanks so much!

The 2nd issue of Ahoy Comic’s Ash and Thorn drops this week on July 8th. If you would like to learn more about Soo Lee, you can find her website here or follow her on Twitter @soodlee. Have you checked out Ash and Thorn? For a superhero tale told from a different perspective, you should check it out from Ahoy Comics. 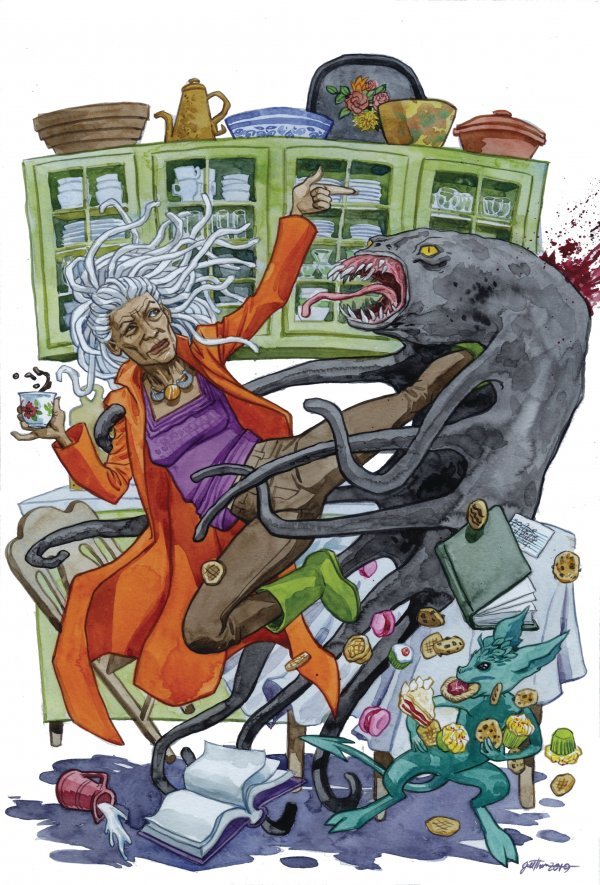