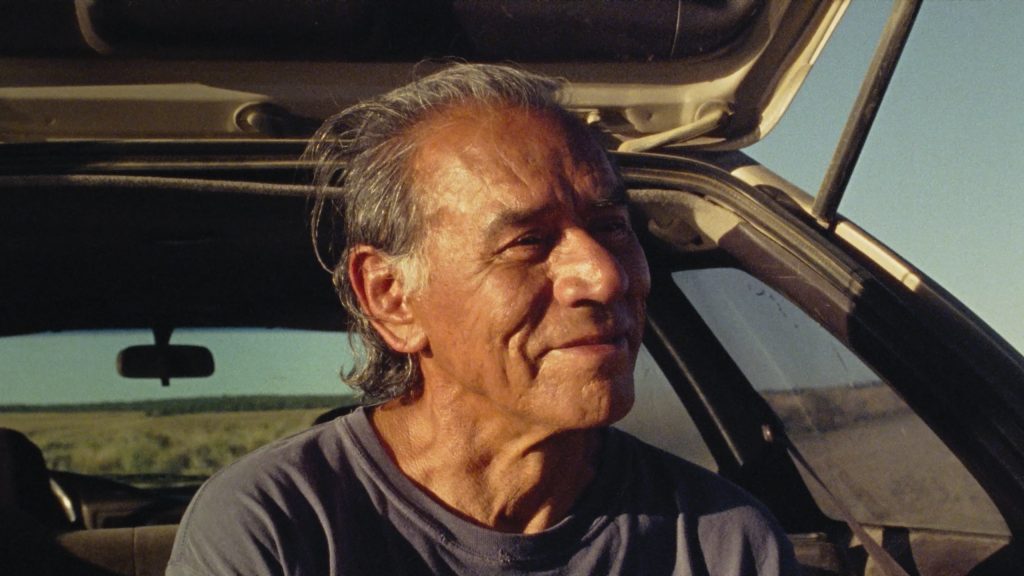 For many, Wes Studi is best known for his intensity. His most famous roles may well be in the Michael Mann-directed films The Last of the Mohicans (1992) and Heat (1995), both of which feature Studi channeling a quiet menace. All of this makes his turn as Lito in Max Walker-Silverman’s A Love Song (2022) all the more remarkable.

Currently playing in theaters, Studi co-stars with Dale Dickey as a pair of middle-aged folks who have lost their spouses and feel adrift. Dickey’s Faye invites Studi’s Lito to the campsite where she is staying to rekindle a friendship the two shared growing up. I had the chance to sit down with Studi to talk about his work in A Love Song, as well as some broader reflections on his career.

The following conversation has been edited lightly for length and clarity.

[Devin] Starting at the top, can you walk me through how you joined A Love Song?

Max reached and offered me a part that had to do with, as he put it, playing a guitar, singing a song, and kissing a girl. I had to step back and say, you know, I’ve never done that in a role before. I heard from him in the waning part of 2020, so I was a little worried about working in a bubble with all the pandemic protocols. But, I really wanted to do those three things in a film so I decided I could get past that. So we made a deal and went to Telluride to quarantine, and then right on to work.

Lito is a different character than most that you have played over the years. What was it like to step into that new space for A Love Song?

It was a lot different. There was no grand mission to go save the world or anything like that. Or to fight off some enemy like most of the parts that I’ve done before. It’s such a personal and interpersonal relationship between two people. Two people who are so vulnerable to themselves and each other. How they slowly begin to chip away at their own defenses that they’ve set up over years and years, which is not a socially comfortable thing to do. But I think it’s reflective of human nature to a great degree because that’s essentially how I think I would act in that situation, It would be extremely awkward, and hard to make yourself so vulnerable to anything that can happen. Right? Maybe rejection, maybe acceptance. Maybe something in between.

The way you talk about that makes me think of your first scene. You show up at the campsite after all this build-up about who Lito is going to be. It’s a great image of you standing outside the door with a tender awkwardness holding some flowers. How did you approach that scene, which is pivotal for the story?

I don’t think Lito was all that comfortable with the idea of bringing flowers to somebody, but he had heard that that was a thing men do. So he was essentially giving it a try, and hopefully, that was a way to start a conversation. As it turns out, they both felt like it was just weird. Okay, got these flowers. Now, where do we go? Where do we go from here? Just the idea of doing something unconventional for a person. Trying something because hey, maybe it’s what people should do and Lito wants to connect with Faye.

How did you approach building that connection on screen?

It’s what the story is about. The beginning of allowing oneself to bloom, and to push things that have been obstacles throughout life aside. Maybe just do away with them or realize that they have been obstacles in your life throughout. And it’s time to get rid of them and move on. Because, yeah, the time to move on, I think is sort of the story for both characters.

There’s such a blend of tenderness, humor, and sadness in the dynamic between Faye and Lito. Was it challenging to keep tabs on the different emotional notes you needed to hit from scene to scene?

I think each emotion is difficult in its own way. The essence of most of the scenes has to do with establishing some sort of trust and looking at whether one of us will be accepted or rejected. It’s a very brave film in terms of that. Faye and Lito are willing to find out. It in itself is a brave thing to do, and much better than being left wondering what might have happened.

The movie, and the role, are very introspective. All about sort of testing oneself out. That’s personally been a kind of a goal of my mind throughout life. Testing myself to see if I’m able to do this or that. A Love Song involves another person and as well as their feelings, both things that need to be considered throughout. I think that’s why Faye and Lito tiptoe so cautiously about getting together again. Rekindling a friendship that was good at one time. One of my lines is “We were good friends at one time, right?” I think it’s a very human question to ask.

The movie really thrives on asking and, if not answering, considering those sorts of introspective human questions. Most of them happen with you and Dale together. But, you do have a major beat alone in the car changing before dinner. No dialogue, but raw and big emotions all the same. How do you prepare for a scene like that?

I put myself in that situation, and try to think through what I might do if I was getting ready for a moment like that. I would really want to look good. I want to be presentable. I want to impress her. When I sit in that I can start believing in wanting all that as much as the character. And then, hopefully, whatever emotions I find can come through my eyes, my looks, or whatever. It’s all working on the inside, and I’m pretty good at fooling myself to believe in whatever it is on the page so you can see it on the outside.

I love that you specify your eyes because something I’ve always noticed in your performances is how expressive your eyes are. Is that something you have intentionally worked on, or just something that comes naturally to your craft?

I don’t know that it’s a conscious effort. What I do is ask myself questions and let my face react to them. Like in the scene we talked about. I asked myself questions like, “Well, what do you think I should say to her first?” or “What should I do?” Again, it’s about connecting to what I would actually do in the situation if I were trying to impress someone. These are the questions I might run through in my head if I’m trying to make a friend or working toward a pleasant experience with someone else. I guess what it comes down to is that it’s always an internal process of putting myself in the moment, and the feelings leak out through the eyes. Your body responds to what the mind is doing.

Something else I’m curious about is the fact that, apart from Dale, your most consequential scene partner is an adorable black dog. How do you handle sharing a scene with an animal that, I imagine, isn’t nearly as easy to work off of as another person?

I’ve never worked with that many dogs. Maybe once or twice. My approach then, and still now, is that I just kind of let the handlers do their thing. It takes a little bit more time to establish a relationship with a dog, you know? They don’t take to you immediately and do what you ask them to do as is required when shooting a scene. So, I leave it to the handlers to get them to do what they’re supposed to do because they’re trained dogs. I have my method, they have their method. Seems to have worked out alright.

Now that A Love Song is in theaters and more people will see it, what do you hope audiences can hold on to from the film?

I think in essence, it’s a very hopeful film. It’s an affirmation that aging doesn’t have to be growing old or useless. We can feel like we’re just as important to the world as we ever have been. I think it’s sort of a blow at ageism, in its own way. But mainly, it’s a hopeful story for people who have perhaps been isolated and have drawn further inward away from their environment. The people around them. Our story is a good suggestion to reach out to other human beings again.

A Long Song is currently playing in select theaters courtesy of Bleecker Street and Stage 6 Films.