Review: ‘Medusa’ Tantalizes its Audience With an Updated Reading of the Original Myth 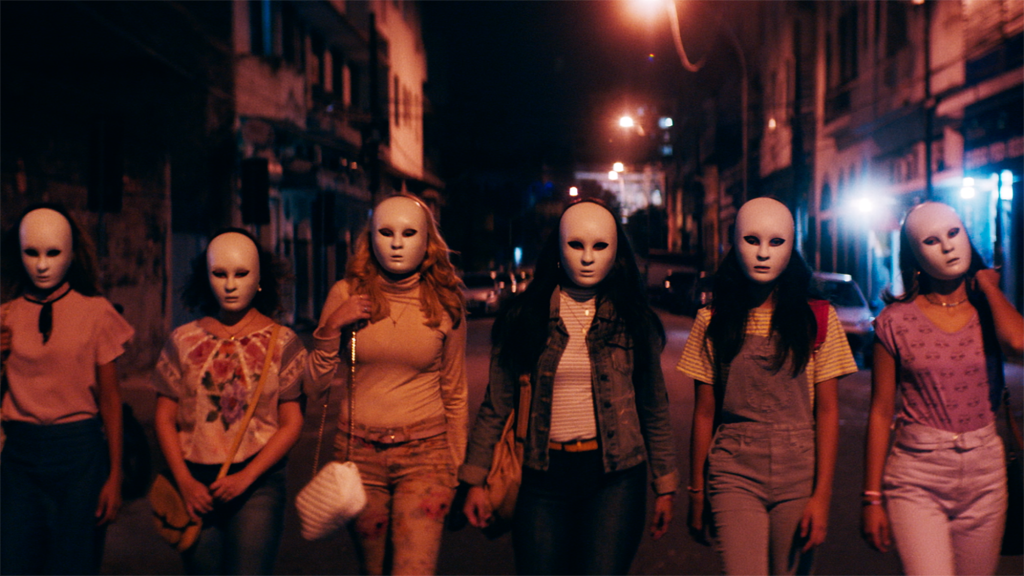 Anita Rocha da Silveira’s second feature film Medusa is a brutal masterwork that uniquely uses genre pastiche, tying the titular Gorgon’s mythos into its aesthetic in an impressive way. The film follows Mariana, a member of a local megachurch and part of a girl gang that stalks the streets at night to find sinful women and beat them both into submission and into accepting Jesus Christ as their lord and savior to earn new members. Mariana’s best friend Michele leads the group and touts herself as a social media influencer for respectable religious women, offering beauty and makeup tips for touching up their appearance and playing the role of a good Christian woman.

Michele and other members of the group begin swooning over their pastor’s male youth groups, modeled after numerous religious armies in Brazil to uphold both a militant devotion to their god, but also physically persuade and subdue if need be. They also regularly perform for the megachurch in garish song of praise, each gang member playing out dance choreography and harmonizing to an extremely alarming “theme song” for the church. This is their public face: good Christian girls singing their devotion for the church while the congregation looks on in approval.

Early on during a party with the girl gang, Michele recalls a girl who was beaten so badly that she renounced her sins and pledged her life to the cross, before suffering a horrific incident which left her face burned by acid, blinding her in one eye. They’ve never seen nor heard of her again, Michele imposing a saint-like status of her disfigurement, attributing it to the “divine fire” of god’s light, instilling her presence as a sort of omnipotent force and urban legend for the girls.

Throughout Mariana’s (or Mari as her friends call her) journey she encounters a creeping doubt over the “recruiting” her and her gang are taking part in. The violence feels brutish, overreactive, unnecessary to her after a point. During an encounter with a girl they’ve targeted, the gang scare a girl into running for a nearby park to hide. Mari finds her and tries to pin her down while calling for help from the gang, but finds herself on the other side of self-defense as the girl pulls a knife and slashes at her face. The girl gets away and will never be seen again, but Mari now has a scar to remind her of the violence she helped incite. Her employer, a cosmetic surgeon who she works at the front desk for, pulls her aside and fires her based on the scar that is developing on her face. He expresses his need for clients to feel beautiful again and compares their unspoken discomfort to Mari’s now marred face, convinced that she would turn away business and is summarily let go. Desperate for work, Mari interviews at a hospice care clinic.

She seems to like the job, but is put in an environment that allows her to reflect on her past choices and works closely with others who don’t keep tabs on her and trust her to do the work. Mari is used to feeling checked at every turn and given permission for nearly every little thing. The silence the new job provides is confusing. This causes a rift between her and the gang, especially Michele. As the film develops, relationships morph and the true faces of each other are revealed to one another. Many have not ever realized who they had been fighting alongside, or if they ever really knew them. This is the beginning of the revealing of their private faces: good Christian girls abused by the system they praise, walked on and forgotten after they are no longer in sight. Segmenting the film is a simple set of act breaks. A close-up of a sink that would be attached to a vanity, but all we see is a drain accepting discarded blood & beauty products like a sacrifice made.

There will be many different readings of Medusa‘s sociological themes in addition to alignment with the Greek myths involving her. But it’s important to remember that in the wider-known myth according to Ovid Medusa was punished by Athena for fornicating with Poseidon in her own temple, turning her hair into snakes. She was then hunted by Perseus, aided by numerous gods to kill the only mortal Gorgon of her two contemporaries, and beheaded while still pregnant by Poseidon. From then on her severed head was then used as a weapon by the man who killed her. At her tragic life’s end her severed head was added to Aegis, Athena’s shield.

Greek mythological scholar Jane Ellen Harrison wrote of Medusa’s treatment something that resonates strongly in da Silveira’s melancholic repurposing: “her potency only begins when her head is severed, and that potency resides in the head; she is in a word a mask with a body later appended… the basis of the Gorgoneion is a cultus object, a ritual mask misunderstood.” (Princeton University Press. pp. 187-188) The injustice of Medusa enacted against her is something Mari and Michele, by extension, is threatened by their own church. No matter how hard they work for their faith and status they are only one misstep away from receiving the same treatment they dole out to the sinners the gang seeks out.

Medusa isn’t an easy film to watch, if you can guess it. But it is an important one, beautifully woven between three elements normally at odds with each other; the visual style is strikingly similar to Argento’s Suspiria, the underscore evoking a mesh of Carpenter, Frizzi, and Goblin, yet the popular music the girls perform clashes so colorfully against the elements that surround it (their cover of House of the Rising Sun comes to mind) that these mismatched parts tell a story all its own. It’s an experience not to miss, its layers of carefully placed incongruences adding to the whole of the opposite of hopelessness. But collective anger in groups facing discrimination will always lash out, and it’s never pretty. The feeling of fear in Mari doesn’t merely fester towards the climax, it forms a bulwark, rallying all those who have been transgressed upon in the name of the merging of commerce and religion, self-justified corporatization and militarization used against its members at the slightest disobedience.

In Homer’s Odyssey (xi), Medusa is never mentioned by name but can be traced to this passage:

Lest for my daring Persephone the dread,
From Hades should send up an awful monster’s grisly head.

Taken from the same source as her above quote, Harrison’s interpretation outlines the fear others had of Medusa, and it is an old fear that needs no translation:

'Medusa' is a brutal look into the inner workings of a Brazilian megachurch, where a gang of masked girls stalk the night punishing sinners.