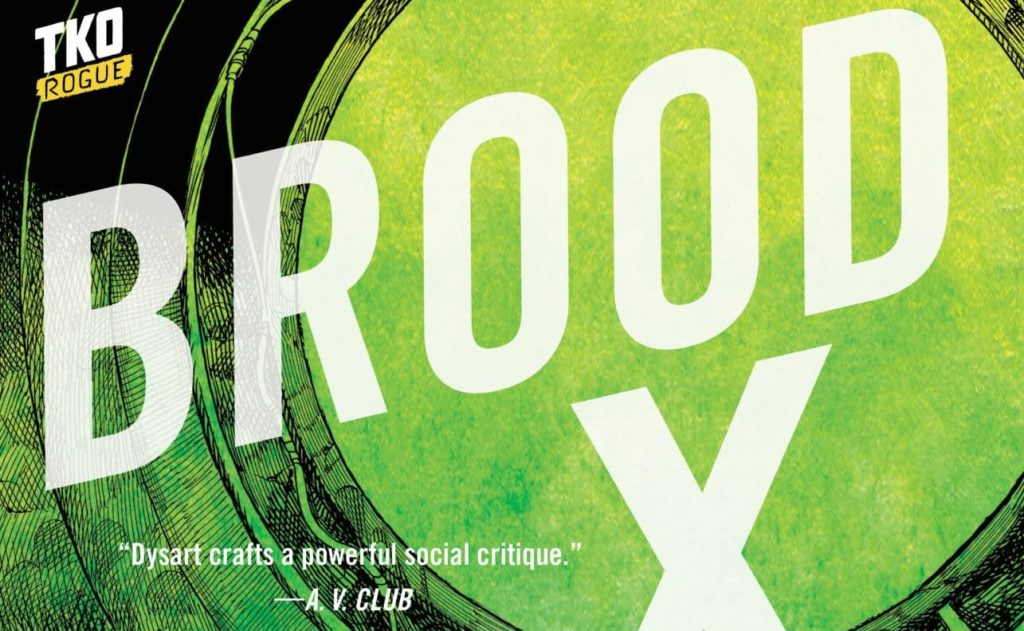 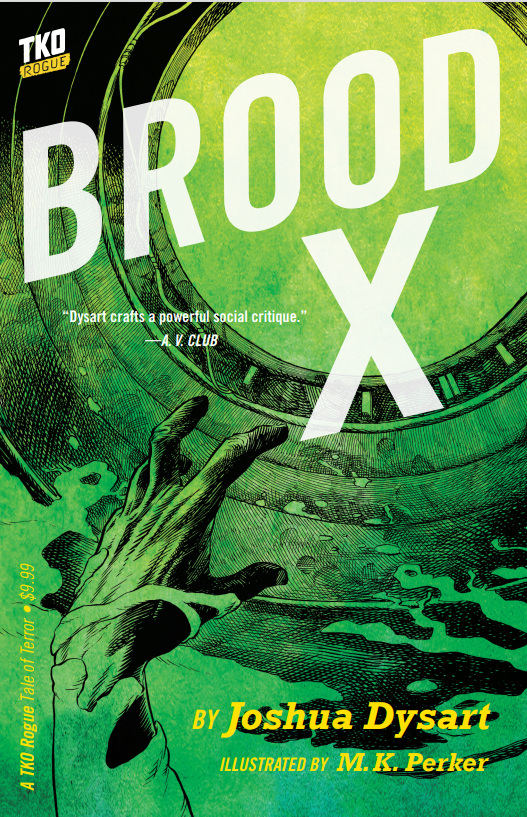 You have to give the folks a TKO credit. Whether it be one of their intense graphic novels or an illustrated novella like Brood X, they recognize a great story and put it out there for all their fans to read and see. In this case, Brood X by Joshua Dysart and illustrator M.K. Perker tells a tale that combines an intense murder mystery with fears of late 1950’s McCarthyism and an exploding Cicada invasion. Talk about piling on. All of this takes place in the middle of nowhere as a team of seven works on a bomb shelter. With that kind of stress, the last thing you need or want is the incessant buzz of an unprecedented Cicada swarm. Of course, just because you don’t want it, it pretty much is a given it’s going to happen.

It is Summer of 1953. Seven workers of different varying social, racial, and economic backgrounds have gathered together to work on a job. Quent, Victor, James, David Bruce, Ian, Hank and Homer. They have been brought together because of their various skills. Victor is the lead carpenter; old man Homer the engineer; David Bruce is a plumber; James is a metalworker; Hank is a machine Operator and Ian, is the mechanic. Quent is a general laborer. Every worksite needs general laborers, otherwise none of the grunt work gets done. The men are different enough that there are tensions. Especially where Victor is concerned as the only black man among the crew. However, they give Victor his space since he was a boxer in his previous life. His huge hands were a reminder of that. As the men worked, they were all aware of the impending Cicada swarm predicted that summer. Many had been through previous incarnations of it. The question was when would it hit?

The answer came two weeks into digging as the nymphs began emerging. They dealt with it as best as they could, almost in awe of the enormous amounts of them as they climbed trees and prepared for maturation. The men continued their tasks, working to bring the bomb shelter they were working on to fruition. But before long, the male cicada’s, having reached maturation, begin their siren song for the females. The sound drowns out the portable radio the men listen to and soon their dinner plates are overrun with female Cicada’s, answering the male’s siren song.

The next morning, the place is overrun by Cicada’s. It is the most any of them has ever witnessed. While they continue to do their best to protect their work from them, they question if perhaps some more bug eggs have been laid in their wood frames. The camp dog Mac eats the bugs by the hundreds. Until he has ate so much that he vomits up his meal and begins again. By the end of the day, the men are exhausted and pretty much sick of the constant droning of the Cicadas. Homer, their elder statesman, seems to be out of sorts. One of the men inquiries about his health but he gets waved away. The next morning however, Homer is found dead in his bunk.

The cause is unknown. But Homer WAS getting up in years. The real question was, what would they do with Homer’s body? If they took him in, no doubt the site would be shut down for an investigation and they all needed the work. David Bruce suggests they put Homer on ice until they finish the job. Once the job is complete, they can decide where Homer needs to go. Besides, no one knew who Homer was. Would one of them agree to pay for and make burial arrangements?

Before they can decide on this, the camp foreman’s wife cries out. Mac, the camp dog who had been feasting on Cicada’s was also found dead. Three weeks in and two souls were lost. Coincidence? Perhaps. Before long more suspicious deaths would occur. By then, no one could be trusted, and the men soon had other reasons to dislike each other. Distrust and Fear fueled the camp, and no one knew who was responsible. But who could think with the constant drum of the Cicadas? Such is the way in Joshua Dysart’s Brood X.

If you like intense murder mysteries that don’t necessarily follow established norms, TKO Rogue Tales of Horror, Brood X would be a novella for you. Author Dysart sets the tale in a time set that bred distrust and irrational fears. The late 1950’s with McCarthyism and the Red Scare made for an atmosphere that encouraged actual neighbors to question one another. This is only intensified when dealing with complete strangers with obviously different socio-economic backgrounds and the prejudices therein. Not to mention almost complete isolation. Mix in the inherent fear of a plague style Cicada invasion and the uneasiness that promotes, and the setting is ripe for a whodunnit. In this area, Dysart does not disappoint with a narrative that will have you second guessing yourself until he lays it all out in the end. Even then, you might question why things transpired as they did. That seems like a success to me. When mixed with M.K. Perker’s illustrations, it is a quality addition to the TKO Rogue Tales of Horror Collection.

With the Red Scare on the rise and a looming fear of nuclear war gripping the nation, seven laborers gather under the smoldering heat of an Indiana summer to begin a curious project: constructing a bomb shelter in the middle of nowhere. But when the emergence of a once-in-a-century cicada swarm ushers in a series of increasingly unlikely accidental deaths on the site, the survivors start eying each other with more than just suspicion. And with good reason. One of them has heard the cicadas’ maddening song before. A nail-biting murder mystery unlike any other that will leave you guessing until the very last page. By best-selling author Joshua Dysart with illustrations by internationally renowned artist M.K. Perker.