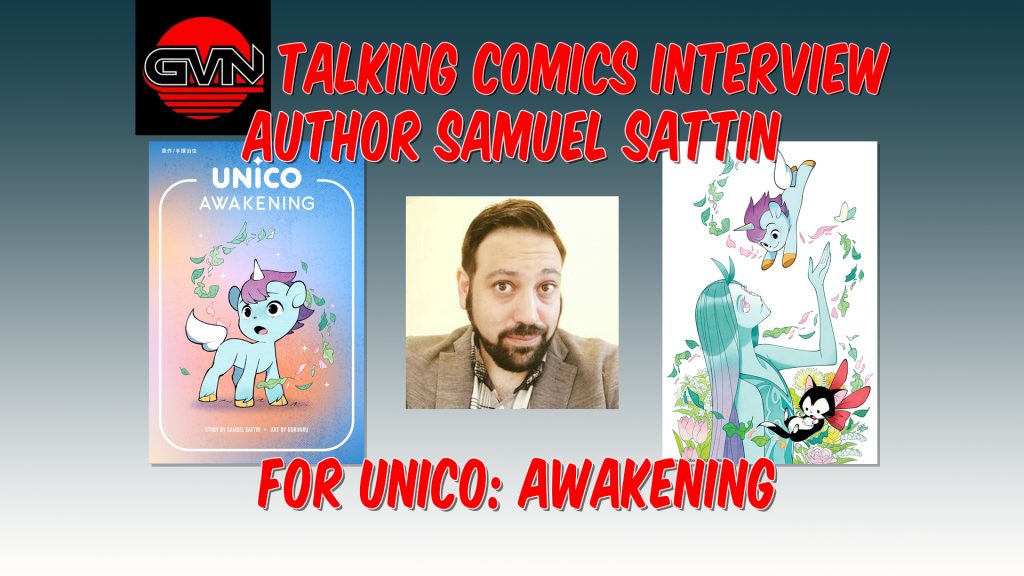 When the creative team behind Osamu Tezuka’s iconic story of UNICO, Tezuka Productions in Japan were looking for creators to adapt the beloved story for new audiences, acclaimed novelist Samuel Sattin jumped at that chance. Working with the Eisner Award-winning Artist Team Gurihiru, they have produced Unico: Awakening, a 162 page Manga, which is currently working toward the end of it’s successful Kickstarter campaign.

Recently, we were fortunate to be able to get a moment of Samuel’s time to discuss his book and the honor of working on Osamu Tezuka’s opus Unico. So, let’s welcome Samuel Sattin to GVN’s Talking Comics.

GVN: Thank you so much for your time, Samuel. After looking over your website, you are an extremely busy man. But everyone has a beginning. So, when did you take an interest in writing and whose work inspired your efforts?

SS: Ha! Yes, extremely busy these days. Though in part, that may be due to the fact that there was a point in my professional life when I desperately just wanted to work, but was too green to capture enough of it. This is something most writers and artists understand, I think. You live in a desert, and then, if you’re lucky, you get a bit of rain, and then a lot of rain, and then that becomes a flood and suddenly, you need to build a boat. I’m still building that boat.

As for where I started, I’ve been writing ever since I was a kid. I love and loved fantasy growing up, so I wanted to write those kinds of stories, but as I grew I realized I wanted to write other kinds of stories as well. Comics have been a big part of my life ever since I picked up a copy of Elf Quest at a Renaissance Festival when I was 11, and I spent most of my teens inside comics shops, flipping through the bins and getting caught up in the 90s Image deluge.

After a while, I realized that I loved language in general, and when I got out of college I considered trying to become a translator; my dream was to work at the U.N. But I just couldn’t stop writing. I applied for a MFA in Creative Writing in the Bay Area, got in, and devoted myself to the pursuit, with all the good and bad that came along with it.

GVN: I’d say it worked out quite nicely for you. Of course, the main reason we’re talking is your work with Tezuka Productions in Japan on the re-imagining of Osamu Tezuka’s beloved character Unico in Unico: Awakening along with Gurihiru. How did this project come about and were you familiar with the character before being approached?

SS: This project first came about via my friend, Deb Aoki. She introduced me to a person named Vince Shortino, who founded Crunchyroll Japan. I’m a massive fan of Osamu Tezuka. His books have changed my life. When I told this to Vince, I discovered that he had worked with Tezuka Productions for a long while, and he said that they were open to accepting pitches to adapt and/or reimagine some of their classic characters, including Unico.

I jumped at the opportunity to put together a pitch, and to be honest, I still get goose pimples when I think about the fact that they accepted it. Working on this project has been one of the singular most incredible experiences of my life, and I’m extremely grateful.

As for the character himself, yes, I was familiar with Unico previously. I’d seen the films as a kid, and I’d read some of the comics. But I admittedly got a lot more absorbed in Unico’s world and history when I got around to pitching it. I wanted to know everything that I could.

GVN: For those unfamiliar, can you share a little bit of about Unico and what Unico: Awakening is about?

SS: For those who may not be familiar with Unico, it tells the story of a young unicorn whose incredible power to spread kindness and love draws the ire of the gods, notably the goddess of beauty and love, Venus. She has his memory wiped and banishes him from the heavens, essentially attempting to have him destroyed. Thankfully, Venus’s servant, the West Wind, takes pity on Unico, saving him, with the caveat that she must wipe his memories again whenever he makes new friends, since when his powers awaken, he draws the gaze of the gods. It’s a tragic story of someone who is never able to remember the friends he made, or the lives he changed, due to jealousy and envy.

Unico: Awakening is based off of a chapter from the original Unico manga, called The Cat and the Broomstick. The original story is a bit challenging to break down step by step, so I’ll spare readers that. But overall, it’s about how Unico befriends a young, abandoned cat that wants to be a human and leave her feline-ness behind. Unico grants her wish, with a few caveats in mind, which leads to her catching the eye of a sadistic hunter, who in turn invokes supernatural powers of his own. Unico: Awakening homages this chapter of the manga, while re-imagining it for a new generation of readers. In it, you’ll see that some characters have been given larger roles. We’ve also provided a larger plot in the backdrop to expand the Unico universe.

GVN: I imagine the stress of working on such an iconic story was substantial. How much pressure have you felt working on such a beloved character and were you allowed any flexibility in your narrative?

SS: A lot! Though In retrospect, it’s possible that most of that pressure has been self-enforced. The great thing about working with Tezuka Productions is that they truly do believe in the ideas that Osamu Tezuka himself championed; namely, that iteration and collaboration are good things, cross-culturally and otherwise.

To be honest, working with Tezuka Productions has been a terrific and seamless experience. As you can see in the video for our Kickstarter, Yoshihiro Shimizu, director of operations at TP and Osamu Tezuka’s former assistant, talks about his insistence that writers and artists have creative freedom when building Tezuka-derived projects. It’s one of the reasons Gurihiru agreed to work on Unico: Awakening, and it’s part of what makes the project so thrilling for me as a writer. We don’t just get to retell the story of Unico. We get to reimagine it.

GVN: Speaking of your creative art collaborators, you are working with the extremely talented Gurihiru team. How closely have you worked with them and how has that experience been?

SS: Incredible. Gurihiru is an extremely talented team, as you say, and I believe their art style combines Japanese and Western comics art styles in a novel way. They’re wonderful to work with, not just because they’re talented, but because they have such a profound understanding of character design, and the subtleties of visual storytelling. They’re also very kind and we share a love of horror movies.

GVN: As we speak, you are closing in on the conclusion of what has been an extremely successful Kickstarter Campaign. As the days grow short, what can fans find at the site that would entice them to be a part of the Unico: Awakening Team?

SS: We have been so incredibly grateful for the support that we’ve received. Truly beyond words.

We have such an incredible array of art to choose from. Aside from the book by Gurihiru and myself, we offer an array of beautiful, 16 x 24 inch prints by renowned artists like Kamome Shirahama (Witch Hat Atelier), Junko Mizuno (Ravina the Witch), Peach Momoko (X-Men: Demon Days), and Akira Himekawa (Legend of Zelda). We also have what we call Artifacts from incredible American cartoonists.

Some of these items include a fashion lookbook by Rye Hickman, a mini comic by Steenz, and photo card by Amber Padilla, a large tarot card illustration by Julia Reck, and a picture book by Maddie Copp. All of these items are exclusive to the Kickstarter, so I recommend checking them out before the clock runs out! It’s also worth mentioning that near every dollar we raise goes to paying the artists and translators who have made this project a reality.

GVN: I thank you for your spending a few moments with us, Samuel. Before I let you go, please share with our followers (if you can) some of your future projects and where they can follow you on social media or the web.

SS: Thank YOU. As far as future projects, I’ve just announced that I’ll be adapting Cartoon Saloon’s Song of the Sea and The Secret of Kells to graphic novel format, which I’m really excited about. I also have a book coming out next year with Rye Hickman, called Buzzing, from Little Brown for Young Readers. People can find me at @samuelsattin on Twitter, and the same goes for Instagram. I also have a newsletter you can subscribe to on my website, where you can hear about what I’m up to, and see some of the weird dioramas I like to build.

It’s not too late to check out this tremendous book and campaign. Just go to the Kickstarter Campaign here.