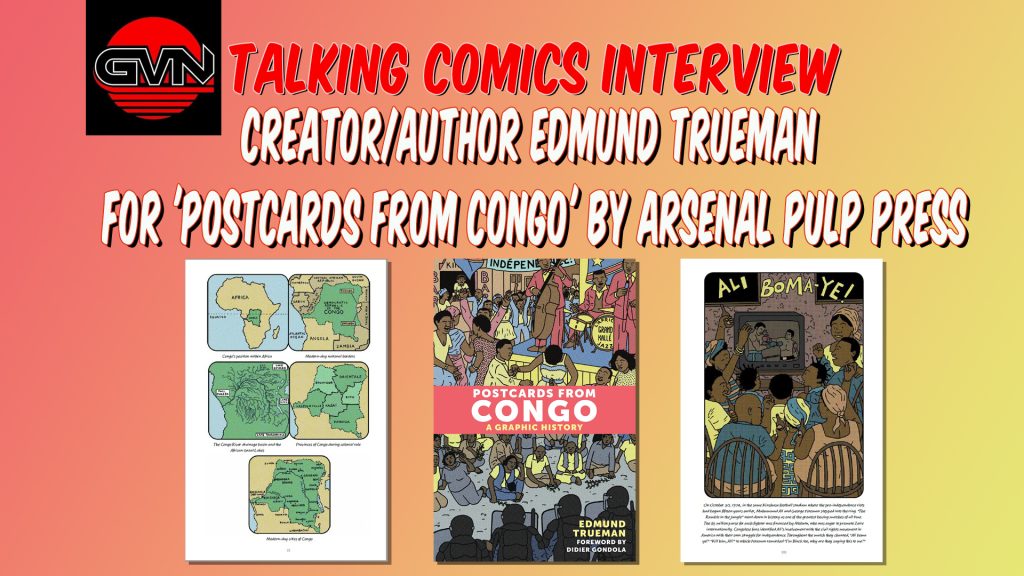 Author/ Creator Edmund Trueman has been creating and self-publishing underground comics for the last decade. During that time, he has written from his own experience about topics ranging from the refugee crisis to the squatting movement. His latest book, Postcards from Congo is his first long-form graphic non-fiction work, and his first work dealing with African history.

Recently, we had the opportunity to sit down with Edmund to learn a little about his start, his choice of self-publishing and his new book and what inspired it. So, let’s welcome Author/Creator Edmund Trueman to GVN Talking Comics.

GVN: Thanks for giving us some of your time, Edmund

ET: It’s a pleasure, thanks for having me.

GVN: As is our norm when meeting new creators, let’s talk a bit about your background. What got
you interested in writing and illustration and who were the creators or authors who inspired
that interest?

ET: I’ve been a big reader of comics since childhood, and as a young teen I was really influenced by the work of Hergé, the creator of Tintin. At some point I got my hands on a copy of Tintin in the Congo and it left me pretty disturbed and confused. I became curious about the real story of Congo, and as the years went by and I learnt more and more about it. Eventually I decided that European comic artists (like myself) owed the Congolese people a more accurate telling of their story story – so Postcards from Congo is my attemptat doing that. You can think of it as an illustrated encyclopedia of Congo and the wider world.

GVN: You have spent the last decade or so creating and publishing underground comics. What is it
about the underground genre that appealed to you? Perhaps the freedom that self-publishing
allows you as far as subject matter.

ET: Basically because no one can send you a rejection letter, which is incredibly empowering for young artists who are still developing their craft. It’s also great if you want to produce work which is valuable but perhaps not very financially profitable. With Postcards from Congo, I felt like I was trying to tell a story which the general public could really benefit from hearing, so I decided to make the leap to a traditional publishing house. Luckily, Arsenal Pulp Press seem to share my opinion that its the right time for the international community to take a more serious interest in African culture and society, so I’ve had their full support from the beginning. 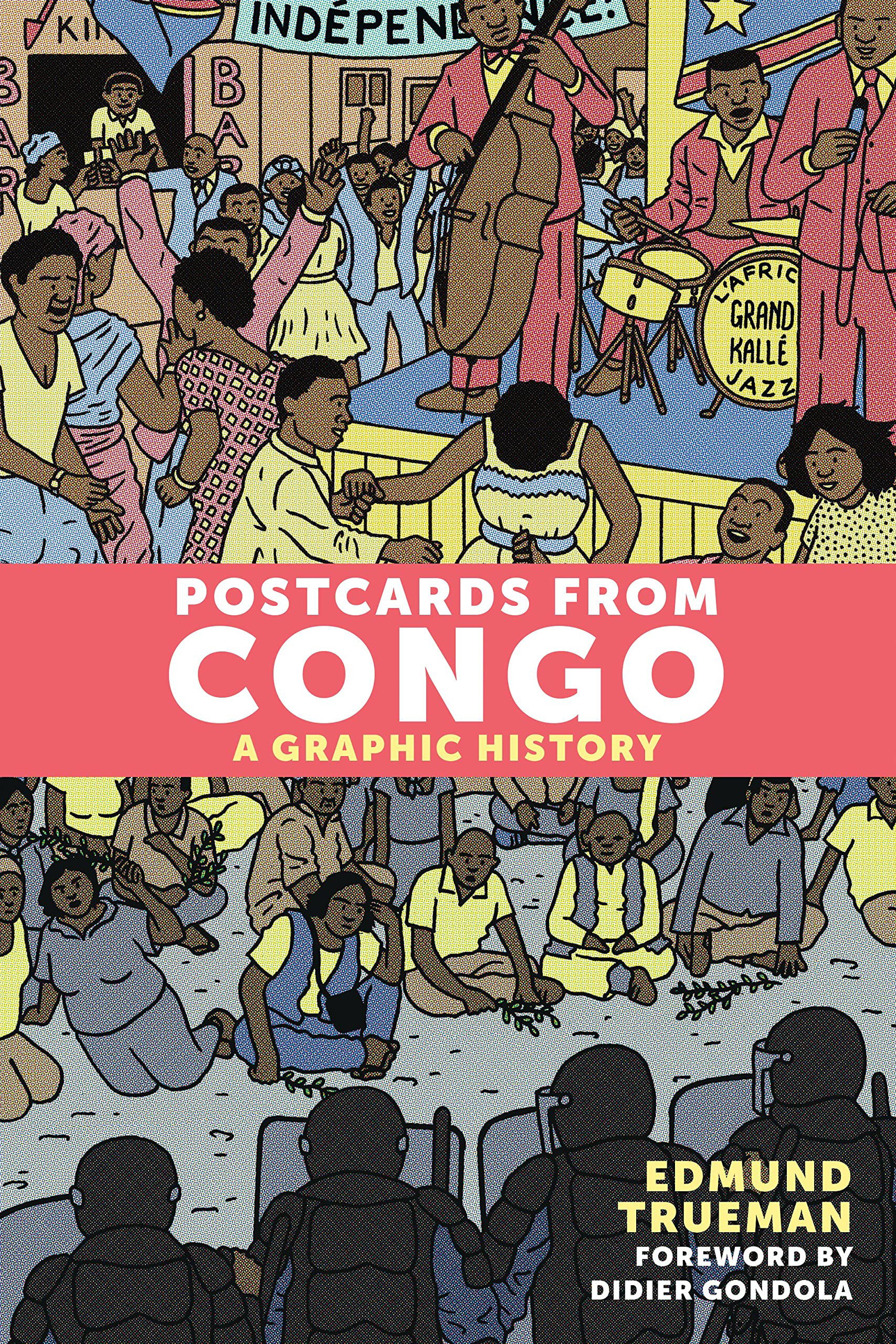 GVN: That is a great segway into your latest work, which is a comprehensive and informative look at the Congolese people in Postcards from Congo. What inspired this book and how much research was involved in its creation?

ET: I was chatting to a couple of African friends about their lives, and I realized that I didn’t know that much at all about the modern history of their continent. Since then, I’ve tried to learn as much as I can, and encourage others to do the same. I can relate to the story of Congo in particular because their story is so intertwined with our own story here in the West. As the story is told in a graphic format, I had to collect a lot of information on how things would have looked, primarily from photos, but also written descriptions, interviews, paintings and even song lyrics. I worked together with historian Didier Gondola, who helped me to check the accuracy of the drawings, and in some cases I had to re-draw scenes altogether.

GVN: So, as your work on Postcards from Congo progressed, what was it about the Congolese people that
impressed you or perhaps surprised you?

ET: I’ve got nothing but respect for the will and determination of the Congolese people. Over the past 150 years, despite living in some of the toughest social conditions on earth they have survived and continued to fight for a better life. One of my favorite discoveries was learning about Papa Mfumu’eto 1er, a comic artist from Kinshasa who gained a huge cult following in the 1990’s. His comics focus on daily life, political satire and spiritual themes which are uniquely Congolese. I’m impressed by anyone who can make a living from photocopying obscure comic books but considering that he managed to do so against a backdrop of economic crisis and a military dictatorship is absolutely incredible.

GVN: As you mentioned previously, you are working with Canadian Publisher Arsenal Pulp Press for your book. Did you pitch your book to them, or did they approach you?

ET: I discovered Arsenal Pulp Press through Gord Hill’s incredible work The 500 Years of Resistance Comic Book. It’s a wonderful book, and Hill’s work has been a big inspiration on me. I thought it would appeal to a similar audience as Postcards from Congo so I approached Arsenal Pulp Press for the publication.

GVN: If Postcards from Congo proves to be successful, do you have another subject that you believe would lend well to the graphic novel format?

ET: Postcards from Congo is intended to be an easy-to-read introduction to Congolese history. It covers a lot of ground, but due to the vast scope of the subject (150 years of history), it doesn’t dive especially deep into any particular moment. I’m currently planning a trip to Congo to conduct some firsthand research into a couple of things which really interest me, and hopefully produce a work which focuses more on one particular topic from the history.

GVN: Thanks again for sharing your time with us Edmund. Before I let you go, do you have any other projects or books you would like our followers to know about and where can they go to follow you on social media or the web?

ET: You can follow me on Instagram at @junk_comix, and from there you can find links on where to order “Postcards from Congo.” I’m still selling copies of a smaller comic called Dunkirk Jungle which I produced in collaboration with two other artists while we were volunteering in a refugee camp on the French-English border. All the profits contribute to the ongoing aid project in the camp, so if anybody would like to support that project and buy a copy then just send me a message on Instagram.

Postcards from Congo: A Graphic History by Edmund Trueman and published by Arsenal Pulp Press will be released on October 25 and can be purchased where all great books are sold.