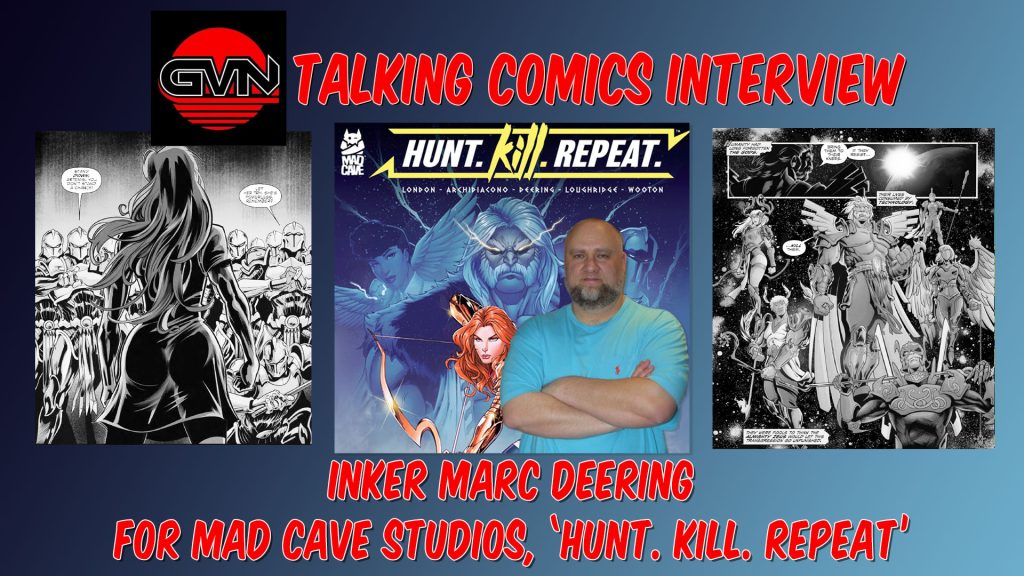 We recently previewed Mad Cave Studio’s upcoming new title Hunt. Kill. Repeat. An exciting look into a world where the Greek Gods and Goddesses decided that the human race was not giving them their fair share of worship. This was resolved by enslaving them and making technology or anything else that could impinge upon their service illegal. Only the Goddess Artemis rebelled against Zeus and his new order. But not without paying a price by losing her human husband and her unborn child. Now only vengeance would placate the emptiness of losing her loved ones.

In conjunction with the preview, we sat down with Mad Cave’s founder and writer of Hunt. Kill. Repeat. Mark London to discuss the book, its origins and the great artwork found within. During that chat, we spoke of two of the architects of that art which was penciller Francesco Archidiacono and inker Marc Deering. Having been so impressed by the first issues look, I knew we also needed to talk to Francesco and Marc about the project. So, first off, we welcome inker Marc Deering to GVN’s Talking Comics.

GVN: Thank you for your time, Marc. Since this is my first opportunity to talk to you, let’s start out with a bit of artistic background. What was it about comic art that intrigued you and whose work stoked YOUR creative fires to apply yourself to that field?

MD: Oh, that’s a loaded question. I like to think that there are 1 or 2 guys that really ‘Started it All’ but honestly it was a huge melting pot of people and a time that really stoked my comic fires. Growing up in the ‘80’s there was a huge influx of artistic talent and ideas that were everywhere in comics, and it was all very fresh and new, not only to me but to all of us. Frank Miller, Bill Sienkiewicz, Goseki Kojima, Katsuhiro Otomo, Dave Sim, Eastman & Laird, Dave Gibbons, Moebius, Wendy Pini, David Lloyd, John Byrne…. the list is huge. It could go on for hours honestly, but it was really the mixing of all of those that got me excited for comics and art in general.

GVN: I can understand that. In all honesty, it has proved to be almost impossible for a creator to name ALL the talents that influenced them. So, getting back to the topic at hand, I must say, the work you, Francesco and colorist Lee Loughridge have put on display for issue 1 of Hunt. Kill. Repeat. is really some top-level art. How did you get involved in this project and did it require a huge pitch by Mark to get you onboard?

MD: Thank you. I’ve known Mark Irwin for a number of years, and we’ve always gotten along really well. He was simply looking out for me and offered it to me to see if I was available. The funniest part is how he did it. He hit me up every way that you could. A Facebook message, a twitter DM, an email, a phone call, a text… all of it. I was like ‘Well it must be something important. :)’ But as far as a pitch, no, not much. Just “I got a job for you if you want it.” And I was very free at that time.

Working with a New Artist

GVN: As I said before, your work over Francesco’s pencils melds beautifully together. Is there a challenge in working with an artist you haven’t paired with before or have you reached the point that it doesn’t matter as much if you are unfamiliar with an artist’s work. You just let your talent loose and try to bring out the artists and writers’ vision as best you can?

MD: Thank you for that. Honestly, it was kind of tough starting out. Very much because I wasn’t familiar with Francesco’s work. I’ve found over the years that there are moments when you just have to dive in and get the work done, which is a moment that you have to switch your head off and just let your hands do what they do. It doesn’t always end up looking good, but you’re trying to hit that deadline and the bigger companies that’s all they care about, hitting those deadlines. Mark hit me up at a perfect time, because I was honestly really sick of that. It just doesn’t end up with the best product in the end and that can be disheartening. I was in a place where I really wanted to make the line-work look good and not rushed. So, with Francesco’s work I let them all know what I wanted and the guys at Mad Cave were very amenable and let me take the time to do my thing. 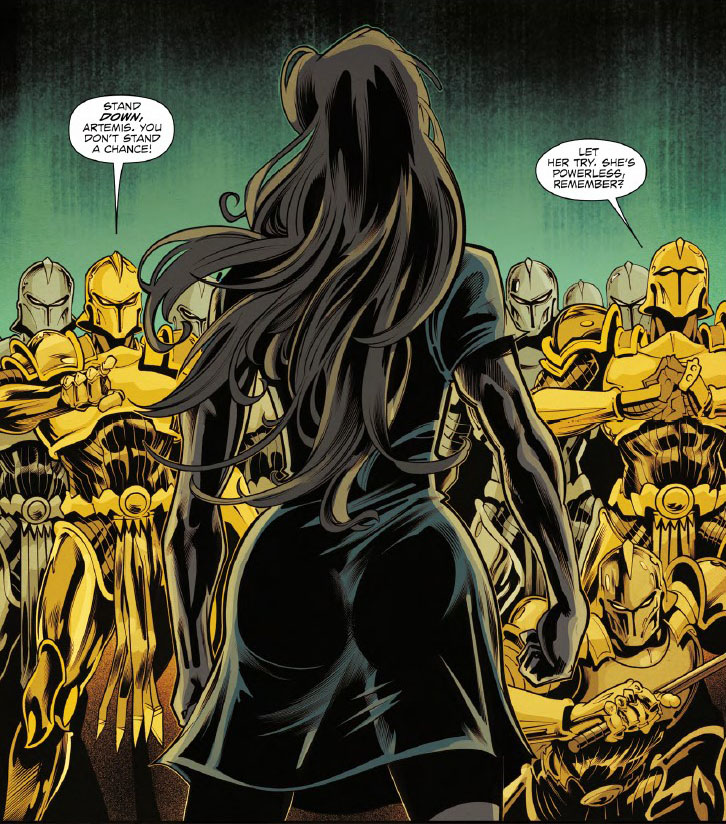 GVN: I have talked to many artists and writers about their processes in creation and how they work together, but I haven’t spoken about the dynamic between pencillers and inkers. How did you decide how to approach your work with Francesco on Hunt. Kill. Repeat?

MD: Time. At first it was a lot of me trying things to see what worked and what didn’t so that led to a few days of indecision, but once I got into the flow of it, the little intricacies of Francesco’s pencils started to become clearer to me. Francesco works digitally and this is the first project, of this size, that I have gone completely digital too so that made for a slightly different learning curve as well, just speaking from the technical side of things. Francesco has a bit of a cartoony side to his work (Dragonball fans take note) so once I recognized that, I was able to dive in and add as much of my manga influence as I could, which, honestly, is a blast to do.

As far as our dynamic goes, once I had found the sweet spot of how to tackle Francesco’s work, and he liked it, I was off to the races. Which is what I’ve found with most penciler/inker teams is the key. Once that key moment of ‘Yes, that works well together’ hit, both parties usually start doing something pretty awesome. Just look at Bachalo/Townsend, Finch/Miki, Kirby/Sinnot, Pacheco/Marino, Zeck/Beatty and all the other over the years.
But again, time was the key and Mad Cave’s generosity with time was what allowed me to make it the best I could. Which is not something I take lightly, very few publishers are willing to do that and I couldn’t appreciate it more. 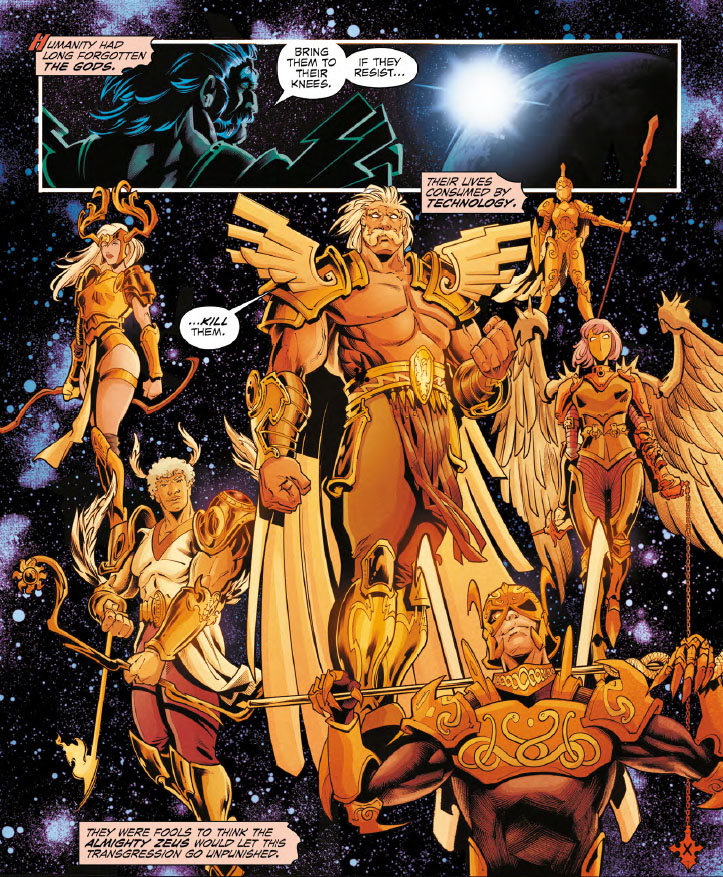 GVN: Thanks once again for giving us a few minutes, Marc. I want to give you this opportunity to promote any other projects (If you can) and where can fans follow you both on social media and the web?

MD: No other projects to talk about, Hunt. Kill. Repeat has been it for the whole year. You can find me all over the web though, I’m on pretty much all of the platforms. Even that new weird Hive thing. 🙂

If You Were a God…

GVN: Finally, I leave you with a whimsical question. The story of Hunt. Kill. Repeat. deals with the Greek Gods and Goddesses. Each one has their unique personality and powers and shall we say…. quirks. If you had the choice, which God (or Goddess) would you choose to be? If only for the short term.

MD: HA! I had to put this question to my wife and sons because they know me best. They all agreed on Hades. I have no idea why. 😉

GVN: Hmmmm…The Devil if I can understand why…. But…they DO know you best.