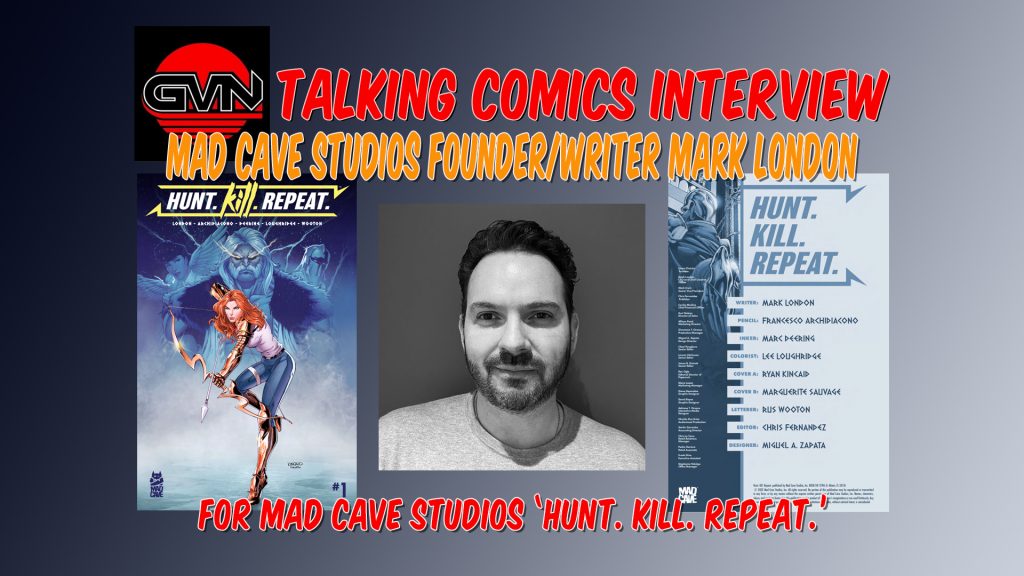 When Things Were New

Back in 2018, when Geek Vibes Nation was just finding its legs, we had the opportunity to talk to another company that was just getting started, Mad Cave Studios, which was founded in 2014. We talked to company founder and writer Mark London who had just released his first book, Battlecats. Fast forward 9 years and London, along with his creative team have turned Mad Cave Studios into one of the most successful indie comic brands out there. But that is only part of it.

During that time, they have also established a YA imprint in Maverick, where it is their goal for readers to “find themselves in their pages.” That would be enough for some, but Mad Cave was just getting started. Recently, they also purchased the highly successful Kid’s Graphic Novel publisher PaperCutz. Needless to say, Mad Cave is going all in to capture readers of all ages.

Now, with all of that going on, it would be fair to wonder how Mark finds the time to still write. Well, write he does and coming early in 2023, we are the beneficiary of his talent.  That’s because London, along with talented newcomer, artist Francesco Archidiacono, inker Marc Deering, colorist Lee Loughridge and letterer Rus Wooton bring “Hunt. Kill. Repeat.” to the MadCave line. An exciting interpretation of the Greek Gods and their goal of total subservience of the human race. Only Zeus daughter Artemis stands in the way, at least at first.

We recently had the opportunity to once again visit with Mark, talk about how Mad Cave has grown and about his newest writing venture and his talented creative team. So, let’s welcome Mad Cave founder and talented comic writer, Mark London to GVN’s Talking Comics.

GVN: Thank you for sharing some of your time Mark. I appreciate you finding the time. Needless to say, you have been a busy young man. First, by turning Mad Cave Studios in one of indie comics shining success stories. Next, by bringing such ventures as your Young Adult Imprint Maverick into the limelight with entertaining stories that also educate. And most recently, the purchase of the #1 Kid’s Graphic Novel Publisher Papercutz to add to the Mad Cave line.

ML: Thanks for having me, Martin. It’s humbling for you to name all those things we have accomplished as a team recently. It’s been a surreal year for Mad Cave Studios, that’s for sure.

GVN: Since the last time we at Geek Vibes had an opportunity to talk to you was in 2018, let’s do a bit of catching up. At the time, you had just published your first book, Battlecats. Did you have any idea how much Mad Cave would grow as you started out, or has this all went according to the 9-year London “Master Plan?”

ML: What plan? Lol. I always knew, from the moment we decided to turn the project into a real business, that to succeed, we would have to take the company to ambitious new heights. I wish it would have happened sooner, but unfortunately, COVID did slow us down from achieving certain milestones sooner. However, I do think that those two years gave us time to focus and strengthen our commitment to building one of the most successful comic publishers in the industry.

GVN: One of the things that has made Mad Cave stand out from the rest is your willingness to give new and talented artists, writers, colorist and inkers a shot through your Mad Cave Talent Search. One need only look at the huge success of David Hazan and Shane Connery Volk in their brilliant Nottingham series. Besides recruiting some very talented creators, what have been the benefits of your yearly talent search for Mad Cave?

ML: We know firsthand how hard it is to succeed in this business. It’s all about exposure, track record, and, of course, quality. It is even harder, not to mention disenchanting when you release your work into the world, and no one sees it. There are many diamonds in the rough out there, so to speak, who just need a platform to showcase what they can do.  We’ve always felt the need to give something back to the community and the Annual Mad Cave Talent Search is our way of doing so.

GVN: I have been a big fan of PaperCutz and even a bigger fan of their EIC Jim Salicrup who was my very first interview with GeekVibes (we spoke for over 2 hours on the phone). How did the purchase of Papercutz come about, and what were the benefits for both Mad Cave and PaperCutz that made that union work?

ML: Mad Cave has always been aware of the different demographics that make up the readership across the industry. And, while we decided to start with comic books, we had our sights set on the Young Adult market, that’s where Maverick was born. We were thrilled to develop titles specifically for young adults through Maverick, but there was still one more market for us to dip our toes into. And dip we did. Earlier this year, Mark Irwin brought Papercutz to our attention, our interests aligned, and the rest is history. The benefit of this is that Mad Cave Studios, as a whole, can provide any reader with a book that speaks to them.

The Genesis of Hunt. Kill. Repeat.

GVN: With all that on your plate, I am almost surprised you still had time to write. But not only did you find the time, you have created a series that embraces all the things on my check list to make me not miss an issue. Greek Gods, and bad ass Goddesses. I am of course talking about Mad Cave’s upcoming series Hunt. Kill. Repeat. Brilliantly brought to life with artist Francesco Archidiacono, inker extraordinaire Marc Deering, and the steady excellence of colorist Lee Loughridge and letterer Rus Wooton.

How did this story come about and was it a concept you had in mind for some time now?

ML: For the record, I’m only able to write because of the fantastic team at Mad Cave. Everyone helps each other out.

Almost a year ago, I was tinkering with the idea of an assassin story that I really wanted to write. It was full of action, but also it had a lot of heart. So, I pitched it to Mad Cave’s Publisher, Chris Fernandez. We started talking about different possibilities or scenarios, and I guess that our passion for Greek mythology took over. I kinda merged the two things and spat out Hunt. Kill. Repeat.

GVN: The thing that has always appealed to me about the Gods, whether they be Greek, or Norse is that they basically share many of the same idiosyncrasies of mortals. They just have immense power to back it up. Jealousy, Lust, Self-Importance, Stubbornness all in abundance. Not sure why Zeus should be surprised that his kids share so many of his attributes. How important was it for you to delve into these relationships? Especially where it comes to Artemis.

ML: I completely agree with you. The beauty of it all is when you delve into Greek mythology or even Norse mythology, something becomes clear–Drama! A tragedy of epic proportions which resembles what we experience in our daily lives. The gods may be all-powerful and mighty, but they are flawed just like us. So, this story, although it’s bombastic and full of action, at its core, has a very personal and emotional element attached to it. A dysfunctional family is brought to the forefront of a revenge tale of epic proportions.

GVN: You are working with an incredibly talented art staff on Hunt. Kill. Repeat., starting with Francesco. How did you and Francesco get together on this project and were you at all surprised when you saw some of his pages? His work on this book is OUTSTANDING.

ML: Chris Fernandez has an impeccable eye for talent, and when he showed me Francesco’s work, I fell in love with it. There was clearly no other person for the job. And the cool thing is, that if you think that first issue is impressive, wait till you get a hold of the next one and the next one. Francesco is the next big thing in comics, and I couldn’t be happier that Chris brought him on board.

GVN: In conjunction with Francesco, you have the multi-talented Marc Deering inking. Marc has worked for just about every publisher at one time or another with a portfolio of work for DC and Marvel. How did you get Marc on board?

ML: That was Mark Irwin and Chris Fernandez. Chris wanted Francesco’s pencils to be inked by one of the best in the industry, so he reached out to Mark Irwin since Mark was a prolific inker before his time at Mad Cave. Mark immediately reached out to Marc Deering and brought him on board. Let me just say that their pairing is an explosive one. I couldn’t be happier with every finished page I lay my eyes on.

GVN: I could keep coming up with more questions but as I said before, you are a busy young man. But before I let you go; you have created a fantastic reservoir of comic and graphic novel talent with Mad Cave. Between your own titles, Maverick and now PaperCutz. What can fans expect in 2023 from you and Mad Cave?

ML: More awesome titles, more creators that you never heard of, and also ones that you have definitely heard of. With a stable of finely crafted books that will amaze and entertain, you can expect a ton more from Mad Cave, Maverick, and Papercutz.