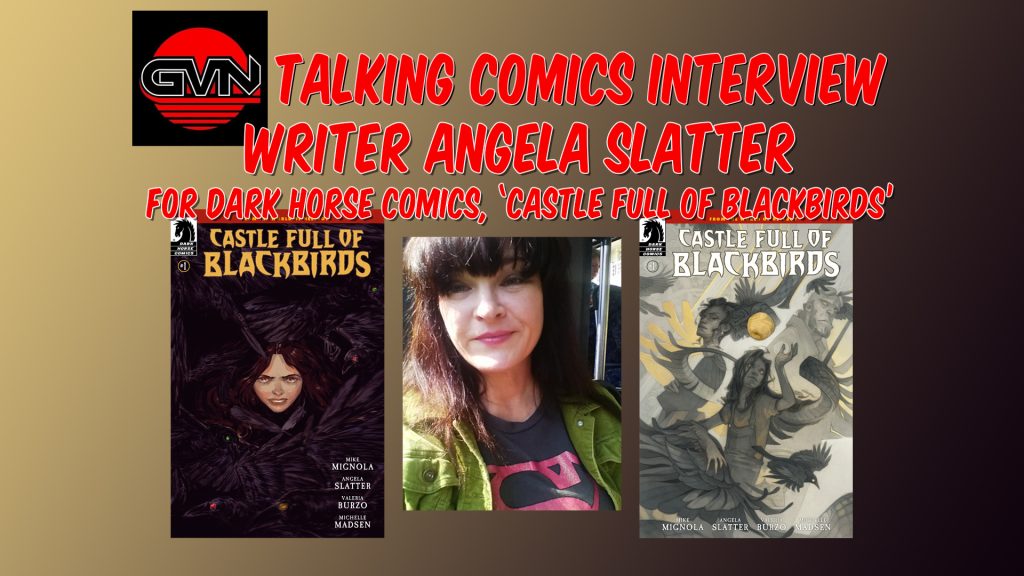 During her career, Australian writer Angela Slatter has enjoyed great success. Her short stories have been included in two different compilations: Sourdough and Other Stories (2010) and The Girl with No Hands and Other Tales (2010). During that time, her work has been well received both by critics and fans alike. So, when the opportunity to work in the Hellboy Universe along with iconic creator Mike Mignola came calling, she didn’t hesitate to take that challenge. Working with the character of Sara May Blackburn (as seen in Hellboy and the B.P.R.D.: The Return of Effie Kolb) in a new series for Dark Horse Comics, Castle Full of Blackbirds along with Mignola and talented artist Valeria Burzo.

Talk about jumping into the deep end of the pool with your first ever comic. Recently, we had the opportunity to sit down with the charming Miss Slatter to talk about her career and how her collaboration with Mignola came about. So, let’s welcome Angela Slatter to GVN Talking Comics Interview.

GVN: Since this is the first time, I have had the pleasure of talking to you, let’s talk a bit about your background. When did you take an interest in writing and which writer or books inspired you to pursue that career?

AS: Hello! I’ve always been a huge reader since I could read for myself (and before that was always demanding my mum tell me stories). As a kid I thought that writers must be these magical creatures that were grown in labs or enchanted gardens—and despite all the yearning in the world I didn’t think I could be one. But I would always tell myself tales and rework in my imagination the endings of stories that I’d enjoyed but had not really been a fan of how they’d finished.

As I grew older, I started putting pen to paper, but I didn’t actually try sending stuff out until about 18 years ago. Some of it got published, so I kept going. I began with short stories, and gradually moved into novellas and novels. Probably my biggest early influences as a writer were Angela Carter and Tanith Lee, Clive James, and Umberto Eco—which is a pretty weird mix. Nowadays I tend to seek out Hannah Whitten, Alix E. Harrow, C.J. Cooke, Stephen Graham Jones, and John Connolly, among a lot of others. I decided to give writing a go because I’d had a lot of jobs in university administration and was very bored—I didn’t want to feel that I hadn’t actually tried to become a writer. So, I guess that big leap worked out well!

GVN: I noticed in my research that you on occasion, teach a class for creative writing at the Queensland University of Technology. What brought you to share your writing knowledge with students and what do you hope for your students to get out of your class? As a follow-up, what do YOU get out of your time with your students?

AS: I have only very occasionally taught at universities, generally as a guest lecturer on short stories. Mostly I teach for the Australian Writers’ Centre. Most writers have more than one job, and often teaching is one of them! I hope that my students come away with more knowledge of how writing works, some good techniques and handy hints to apply throughout their careers, and the confidence to write if they want to and how they want to do it. Not everyone writes for publication––for some people it’s a hobby or therapy. It makes them happy or feel better, which are all totally good reasons to write!

What I get out of teaching is a constant reminder of good technique––when I’m guiding students I’m also remembering how to do ‘stuff.’ When you’re writing as a career, sometimes you kind of forget the basics because they just run like background programs in your head. It can help to go back to first principles when you’re struggling with a piece that’s not working. And sometimes I get to read really cool stories that my students come up with and I’m able to help them in the right direction for publication. I’m always delighted when I see them getting published!

GVN: You are teaming with the iconic comic creator of Hellboy Mike Mignola and acclaimed artist Valeria Burzo on a new miniseries Castle Full of Blackbirds for Dark Horse Comics. How did that collaboration come about and were you familiar with Mike’s work previously?

AS: I was familiar with Mike’s work, absolutely. We’ve known each other on social media for over ten years and have a mutual interest in fairy and folk tales, myths, and legends. We’d chat about writing and remaking classic stories into new things. At the end of 2019 he asked if I’d be interested in writing a comic in the Hellboy Universe about Sara May Blackburn (a character from Hellboy and the B.P.R.D.: The Return of Effie Kolb) and obviously I was going to say YES with embarrassing speed!

Then the pandemic hit, and we got put into stasis until last year—so, 2021—but the advantage was that we had time for the Dark Horse team to find the incredible Valeria and get her on board for “Castle Full of Blackbirds.” And I had extra time to keep adding to my own Hellboy Universe comic collection and reading more and more of Mike’s work, and kind of percolating ideas.

GVN: Did you have any apprehension in working with Mike on this story and how closely did you and he work together on its creation?

AS: Absolutely—who wouldn’t be apprehensive being invited into the Hellboy Universe? It’s my first time writing a comic, and this was like the golden ticket. I’m an experienced short story writer and novelist, but comics are something new for me––a whole new skill set, really.

Luckily, the experience I have in short stories (and as an editor) really helped in terms of telling a succinct story in twenty pages, and my huge nerdy reading and rereading of comics (Mike’s, obviously; 2000AD, Kelly Sue DeConnick’s Pretty Deadly, Cullen Bunn’s Harrow County, and Marjorie Liu’s Monstress, among others) taught me about using the art to also tell the story. Usually with my novels and collections, the artwork is just for the cover, and the occasional internal illustration or endpapers—it’s not part of the storytelling itself. I had to learn how to use the art to help get the tale across to the reader.

Mike and I had a couple of Zoom calls about his initial ideas, and then a lot of emails back and forth on details. He was super patient with my questions, and my weird queries about demons and how magic worked in the Hellboy Universe became fewer, but generally the training wheels came off pretty quickly. Mike just basically said, “You know how to tell stories!” The editorial team at Dark Horse (Katii O’Brien, Jenny Blenk, and Misha Gehr) were fantastic and absolutely encyclopedic in their knowledge of Hellboy’s past adventures, demonology, etc., and were really open to the ideas I threw out there. And obviously, as well as Valeria they found amazing artists for the various covers, including Wylie Beckert and Marianna Strychowska.

So, I’d have to say that I’m really grateful for the faith that’s been put in me and the support I received. It was a dream experience and I’m so proud of what we’ve created.

“Witches are My Literary Jam”

GVN: So, if someone were to tell you that you would be working with some of the characters of the Mignolaverse, would Sara May Blackburn been the character you would have chosen? From comments that I have read, Sara is right in your literary wheelhouse.

AS: It’s so funny you ask that, because a couple of my friends keep saying “Would baby-writer-you have believed that you’d end up writing in the Hellboy Universe?” And the answer is no, it would have seemed totally beyond what I’d have thought I’d get the chance to do.

Sara May absolutely would have been one of my choices. Witches are my literary jam, and I love characters who are at major and difficult turning points in their lives and are also survivors no matter what happens. There are a few other characters I’d love to write some stories for. Who knows what the future will bring?

GVN: Thank you so much for talking to us today, Angela. Before I let you go, do you have any other projects you want to mention (that you can discuss) and where can people follow you on the web or social media?

AS: Thanks for such great questions! At the moment I’ve got a new novel out—”The Path of Thorns” (written as A.G. Slatter), which is a gothic fantasy-horror kind of thing. I keep describing it as Jane Eyre meets Frankenstein meets Dark Shadows with a bit of crime, magic, and fairy tales. And I’m working on the next novel in the Sourdough world, The Briar Book of the Dead, and then hopefully some more comics if the universe is kind!