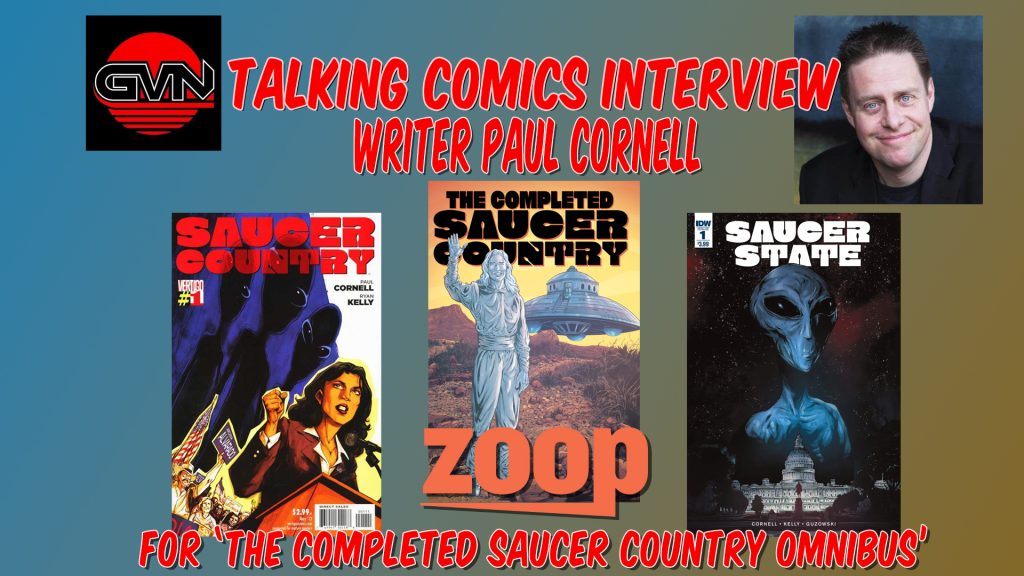 Writer Paul Cornell has done just about every kind of writing imaginable. Including for BBC television and the character that gave him his start and recognition for his fan fiction, Dr. Who. However, Paul was just scratching the surface, also writing novellas and for both Marvel and DC. One of the books that he created for DC was 2012’s Sci-Fi thriller Saucer Country for DC’s Vertigo. This was later picked up by IDW in 2017 and renamed Saucer State which ended after 6 issues.

Fastforward to the present and Paul and artist Ryan Kelly have re-obtained the rights for their Saucer Country characters. Starting soon on a Zoop campaign, Syzygy Publishing and the original creative team have combined their stories along with NEW material to bring the saga to a close in .

In preparation for this, we recently cornered Paul to discuss this new compilation and how it brings Saucer Country to the conclusion he had long wanted to finish. We also discuss some of his beginnings, his love of Dr. Who and the challenges of writing for television as opposed to comics or novels. So, let’s welcome talented writer Paul Cornell to GVN Talking Comics.

GVN: Thank you, Paul for giving us a bit of your time. Since this is the first time, we have had the pleasure of talking to you, let’s start with a bit of your background. You have made a diverse and successful career from your writing talent. What was it that inspired you to pursue writing and was there an author or creator whose work made you want to follow that calling?

PC: I began writing at school, really as a reaction to extreme bullying, both escape and revenge, and the results of that shaped my whole career, notably in novels like “Chalk” and comics like “I Walk with Monsters.” I managed to connect my school stories to my fan fiction to my professional fiction, so I guess I made a ladder for myself, really!

GVN: Of course, in addition to your comics and prose writing, you have had an extensive career writing for television in different genres, but it is your work with Dr. Who that immediately garnered my attention. Although I admit I only followed him back in the days when Tom Baker assumed the role. (yep…I’m THAT old). What was it that intrigued you about the popular character and were you ever intimidated (perhaps in the beginning) of working with the iconic time lord?

PC: My fan fiction was Doctor Who fiction and getting reactions from that in fanzines was where I first found an audience, and how much that audience made me feel better, stronger. So, I was kind of immersed in Who by the time I came to write it professionally, and then went through Who comics and novels before I got to the TV show. So not so much intimidated as having made a lifestyle choice.

GVN: When it comes to writing for television, as opposed to comics or prose, does it require a change of mindset for you in each type of writing or do you take the same approach regardless? A good story is a good story.

PC: Oh, I have to shift mental gears all the time. Prose to comics or TV is difficult, you’ve got a whole different set of limitations and opportunities in each.

GVN: Speaking of the aforementioned intimidation, it is apparent that you are comfortable taking on iconic characters as you also had the opportunity to write for just about every established comic character there is including Superman and Batman for DC. In past interviews, Scott Snyder still admits to being intimidated when he was first given the chance to write for Batman. Was that not a concern for you when it came to writing for such beloved characters? Whether it be Superman, Batman, The Fantastic Four, etc.

PC: I guess it’s intimidating if you let yourself think like that, but I always say that writing is about balancing the confidence to actually create wordcount with the tremendous self-doubt that is proper for a writer. You need to have the enormous confidence to make the words in the first place, then the enormous doubt to see what’s wrong with them and re-write them.

GVN: So, let’s get to why we are here. Your upcoming campaign with the good folks at Zoop is a continuation of a story that you put through with two different publishers, Vertigo (The Saucer Country: The Reticulan Candidate) and then the follow-up series for IDW (Saucer State) which was nominated for a Hugo Award. What made you decide to revisit the story of Arcadia Alvarado and was it always in your plans to do so?

PC: I have always, always, wanted and needed to finish this story. We were left on a cliffhanger, halfway through the proposed IDW run. I had a precise idea of what was left to do, because, unlike, for instance, The X-Files, I always knew this was a single story with a specific ending. Saucer State at IDW was Act Two, and I realized earlier this year that actually we were close enough to the end that, if I dropped some of the bells and whistles, I could write a satisfying ending that we could include in a single volume, that would present one big, genuinely complete, story. That’s when I approached Zoom and wrote the script for the ending.

GVN: Just for those who may not be up to speed on your “Saucer” series, could you give our followers a synopsis of what the book is about? (I started to say a Readers Digest version but who remembers what THAT is anymore?)

PC: Arcadia Alvarado is the Governor of New Mexico. On the eve of announcing her Presidential run, she’s ‘abducted by aliens.’ She goes for it anyway and puts together a team of weirdos/advisors to let her win the race and, at the same time, find out what really happened. Along the way we explore the glorious, colourful history of UFO mythology, a subject I’ve been immersed in for decades, from George Adamski to the Men in Black to the Greys to the alien lizards. We also get into how that mythology has always been used by the US intelligence community and how Russia has been using similar psy-ops to attack the US political system. It’s kind of the opposite of a conspiracy theory book. It’s a proper political thriller with lots of weird aliens.

GVN: As I mentioned, you are working with Zoop for your crowd funding campaign. Is this your first opportunity to do such a campaign and why did you decide to go with Zoop? Also, what can your fans expect to find when they visit your campaign?

PC: Zoop have been wonderfully accommodating in terms of helping the project along. I saw that they’d launched a number of successful books with known creators, and felt they were ideal for what I was after. We’re going to be offering two products: The Complete(d) Saucer Country, a single paperback volume with every issue from all the iterations of this story, plus a new ending; and, separately, just the conclusion, for those who’ve already bought every issue and just want to see how it ends. We’ll be offering loads of perks, including meetups with myself and editor Chris Ryall, and original art from my own collection. (Plus, there’ll be something for the Doctor Who fans in my audience.)

GVN: Thank you so much for your time, Paul. We really do appreciate it. Before I let you go, please tell our followers where they can go to follow you on the web and social media?

PC: Here I am! https://www.paulcornell.com/ (And that includes links to where else you can find me.) And you can sign up your email address to be notified when the Saucer Country campaign starts here: https://zoop.gg/c/completedsaucercountry. Thanks Very Much!