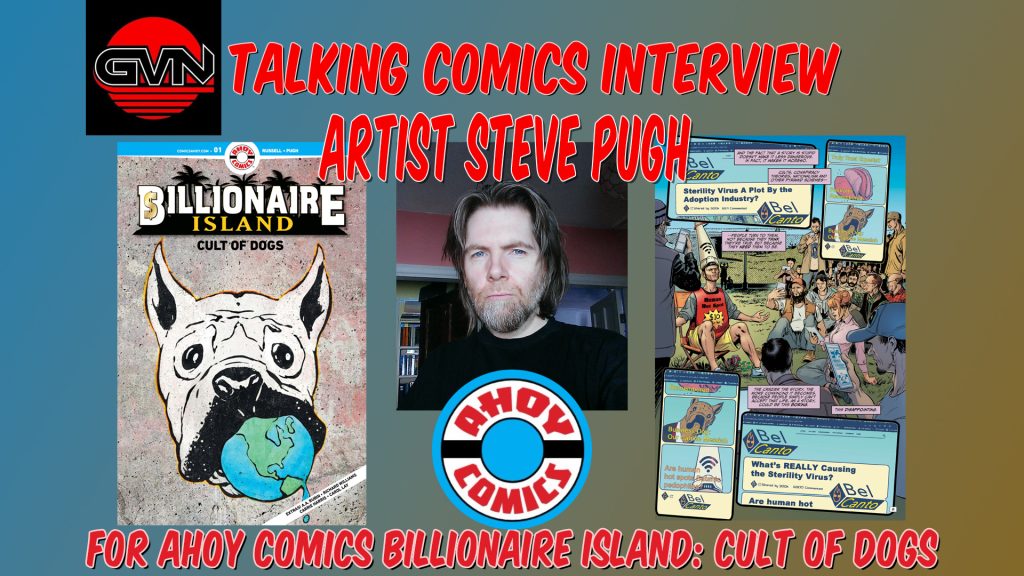 In our coverage of great Indie Comics, we have had the pleasure of covering a number of books from Ahoy. During that time, we have also been blessed to talk to some of the talented creators behind their books. Including EIC Tom Peyer, Writers Mark Russell, Stuart Moore, and more. But somehow, I had missed talking to Mr. Russell’s artistic partner in crime Steve Pugh.

However, that mistake has been rectified. Just in time for the next chapter of the talented creator’s series Billionaire Island: Cult of Dogs. Recently, we were able to sit down with the talented and elusive Mr. Pugh. (Which wasn’t easy when you consider Ahoy’s description of their talented artist: “Steve Pugh won’t tell us anything about himself, but he’s British. This makes me believe that he is either terribly modest or in MI6. It could be both.”)

Fortunately, and with no small amount of truth serum, we were able to discuss his beginnings, his collaborations with different writers, and of course his latest work with Mark. Which includes bringing back fan favorite Business Dog and delving into what has transpired since we last left Billionaire Island. So, lets welcome talented artist Steve Pugh to GVN Talking Comics.

GVN: Thank you for giving us some of your time, Steve. It’s been long overdue since I have talked a number of
times to your creative cohort Mark Russell. So, it’s about time you get your day in the limelight…or
whichever fruit’s light you prefer.

SP: Hey cheers, I do tend to be happiest lurking in the back doing the drawings. Tangerines, if that was a question!

GVN: So, since this is the first time, we have had an opportunity to chat, let’s start with a bit of your
background. What first got you into comic book art and whose work might have inspired you to pursue
that vocation?

SP: So originally, I lived in an area that just didn’t have American comics around, I don’t know why, but you just never saw them. My dad was a train driver tho, and he’d bring the odd issue back he found left on the seats. I’d be reading random issues of these mad brightly colored things, not really getting what was going on but loving it.

Eventually 2000AD started in the UK and that meant I could get a regular supply of stories. Plus, the artists were local to the UK, so you’d actually be able to meet them and show them stuff you’d drawn. Brian Bolland and Glenn Fabry were very kind at the time, very encouraging to new artists and I remember selling a comic that me and Phil Winslade put together and photocopied to Dave Gibbons.

GVN: That is great, I am always interested in how young artists put themselves out there. During your career, you have worked for pretty much all the main publishers, including DC, Marvel, Dark Horse, 2000AD,
and of course, Ahoy. When you started out, did you have an ambition to “mainly” draw for the “Big Two” or perhaps, in your case just 2000AD or were you always open to work for whichever publisher gave you a chance?

SP: Originally, I always intended to just work for 2000AD, I LOVED science fiction, and wasn’t really interested in the superhero stuff… I just wanted to draw robots smashing stuff up! But as luck happened, the folks in charge of John Ostrander’s Grimm Jack comic had seen my stuff and needed a fill-in artist for a few months. John then showed that to Vertigo and the whole thing just snow balled. I did a few issues of Hellblazer with Jaime Delano and he took me over to Animal-Man when he got that book.

The Big Two always had great opportunities for fun work, but yeah, if a writer that I liked had a project somewhere else, I’d have no problem with following them. Drawing comics sucks all the time out of your day, you really need to be surrounded by creators and editorial that you like and trust to get through it, that’s the main thing.

GVN: A very sensible perspective. During your career, you have had an opportunity to work with a talented group of writers. Including Jeff Lemire, Scott Snyder, Garth Ennis, and of course, the talented and humorous Mark Russell. If you had to pinpoint it, from your experience, what characteristic does a writer need to possess to bring out your best work? Is it close collaboration? Getting some distance? How does Steve Pugh work best?

SP: Yeah, I’m a bit of a caveman, I just like to get a script and make it happen. I think what I love in the scripts of the people you mention is that they’re passionate about the work. You can always tell in the script where all the characters are emotionally, you don’t have to guess intent. That means as an artist you feel the ground is solid beneath you so you can start building and improvising character work to back up the writer’s intent.

I guess I hate the “marvel style” scripts where there’s no dialog or context. You can’t match characters to what they’re saying, you have to give them generic “happy” “sad” faces and can’t do anything interesting with their body language to help with the story telling. It’s great for fight scenes but terrible for emotional stuff. I also hate penciling, I like to wade in with inks, get bits done right, then occupy and invade the rest of the page.

GVN: This is why I love what I do. You’re the first artist I’ve ever heard to say they dislike penciling. Just proves there are many ways to produce quality results. But I digress AGAIN. Speaking before of Mr. Russell, you are partnering with him once again on the 2nd Season of Billionaire Island entitled Cult of Dogs for the good folks at Ahoy. When you worked on the first installment, did you have any idea that the book would blow up as it did, and that Business Dog would capture the comic world?

SP: Everyone loves Business Dog, the one billionaire who’s genuinely a good boy! Yeah, I was surprised as anyone that we’ve returned, with Mark’s body count on the original I was wondering who he could bring back! It’s awesome to put back the team together again, I loved drawing the first series and it’s great to be back with Mark, Chris and Hanna to revive the craziness of this unique book.

GVN: Following up, how soon after the completion of Billionaire Island did Mark, and you begin planning out
this next chapter? Were there any concepts that you felt were imperative for this follow-up…such as the
inclusion of more dogs? When the world has gone to the dogs, why not?

SP: I mustered all the experience two runs of animal-man has afforded me, and still I had to rise to the level the script demanded! It’s not easy drawing a suit on a dog, the shoulder pads alone drive me crazy. But it’s my fault for designing him that way. I learned on Flintstones that I have to be super wary when designing anyone who shows up in a script because, well maybe they only exist in that scene, or maybe they become a big player later on in the story. It’s good tho, it means even bit players have a sense of backstory and depth to them. There are no extras.

The story itself weaves between a concerted effort by competing forces to find the richest dog in the world, and a sort of travelog through a post financial apocalyptic America, where each community has found their own way to rebuild. Some are hopeful and positive, some full on crazyface, and of course some both.

Frankly the whole thing was coming true around us as we were making the book, and I’m pretty sure I saw the face of business dog in my toast this morning!

GVN: Well, Baristas created faces in cups of coffee, so why not toast? Thank you once again for chatting with us, Steve. But before I let you go; I want to give you a chance to talk about any other projects you have in the works and where fans can follow you on the web or social media.

SP: Hey cheers, thanks for taking an interest in our book- buy it we tried really hard!
Nothing announced yet on new projects, but I’ll be starting a series at DC, soon, which promises to be amazing. Landing page for socials at the top of stevepugh.com (I’ve forgotten how to update the blog post thing, but all the links for twitter, Instagram, etc. are live)