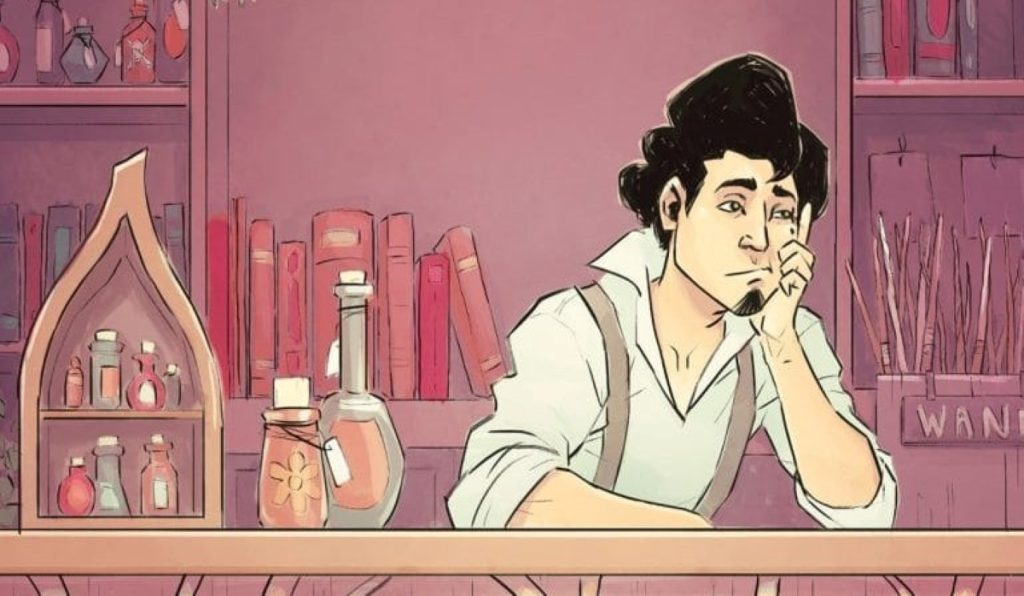 For those children whose families own and run a “family” business, it is a familiar theme. The idea that one day, it would be expected for them to take over that legacy. Sometimes, the children are more than happy to follow in their parent’s footsteps. However, just as familar is the child who would rather do anything else than be trapped into a life they have no interest in. Such is the case with Randlegast Quatermuth Jones. His family has been creating and selling magical potions since before he was born. His younger siblings, twins Asteria and Astreus have developed a skill in potion making and magic and have no problem upholding the family profession. Randlegast, however would rather eat dirt. He wants to pursue his own path, his own dreams. The problem is, he doesn’t know what it is he wants to do.

Seeking Your Own Destiny

He has tried various times to go out and make his way in the world. Each time, he has returned in a day or so, with no better idea of what his ambitions are than when he started. So, until that time that he makes up his mind, his parents want him at the potion booth with the twins. If for no other reason than to keep them out of trouble. Because as much as they love magic and potions, they are easily sidetracked. Ran (the name his siblings called him) reminded his parents that the twins didn’t really NEED his help. Besides, they look down upon him because he has not developed their knack for magic. Upon hearing this, his father decided that what Ran needed was a lucky charm.

Ran at first was reluctant since he deemed lucky charms to be for children (maybe he’s thinking of the cereal?)…or perhaps wand users. His father told him that his lucky charm has worked wonders for him…and his family. But when Ran reached for his father’s, he pulled it back and quickly told him that he needed to find his OWN lucky charm. Something that spoke to him. This was the first step toward trouble. But neither Ran or his parents realized it. In the meantime, Ran still needed to go to the market and help the twins. After he found his lucky charm.

The Start of an Adventure

Meanwhile, the twins were peddling their potions to the crowd milling about the Grand Market of Blossing. Unfortunately, so was their potions rival, Poncelina Arkay. Right in the middle of their spiel, Poncelina told the crowd that her potions would improve their lovelife and increase the size of their loins. And it just so happened that her potions were on sale. Hard to beat a sale. As the crowd followed Poncelina, Asteria said something about her under her breath. Poncelina heard it and turned to face her. Her brother Astreus used his wand to make a shield between them when a hand touched his shoulder. He immediately spun and used his wand, zapping Ran and knocking him to the ground. Poncelina laughed at this but stared at Ran’s new lucky charm that was hanging around his neck. She immediately excused herself, apparently recognizing the amulet that Ran now wore. What was it? Why did Poncelina recognize it so readily? Would it bring Ran the adventure he was constantly seeking or nothing but trouble? Such is the tale in Mad Cave Studio’s Potions Inc.

Writer Erik Burnham has created a delightful tale, with a theme that many people can relate to. Especially those who have parents who expect their children to uphold the family business. Ran’s parents are good people who have supported their family in the land of Primaterra with their Potions. So, it comes as no surprise that they would expect that their children would do the same. Fortunately for them, as the late Meatloaf would tell them “Two Out of Three Ain’t Bad.” Asteria and Astreus are onboard with this plan. As long as they can expand the family repertoire and create some potions and spells of their own. But Ran could care less. Of course, his siblings reminding him continuously about his lack of magical skills doesn’t help.

This all changes when Ran picks up his lucky charm without realizing what it is. One might blame his parents on that one. Why leave an amulet with unfathomable powers just laying for anyone to pickup? Its the equivalent of leaving the gun cabinet unlocked. Nothing good can come of it.  Unless you count the entertaining tale of Potions Inc. Then, a lot of good can come from it. Burnham frames the narrative with the telling of a bedtime story and mixes it up in a fantasy blender including magic, fantastic beasts, dire circumstances and an arch-nemesis to face. But then ups the ante by changing their locale by the end of  issue one and bringing in a whole new set of challenges and a world more weird than the one they left. That’s a whole lot of story in just the first issue. Ready for the 2nd one already.

A great story needs an artist up to the task of telling it. Potions Inc. has the good fortune of artist Stelladia taking on that challenge. With experience in visual development in animation, Stelladia frames Burnham’s story with a skill that reflects the animation background. A perflect blend of whimsical and the classical which pushes Potions Inc. along with pace and good storytelling. When added to the coverwork of Natasha Alterici, and the lettering skills of Micah Myers, Potions Inc. is a another great addition to the Mad Cave library of titles. Mad Cave Studios Potions Inc. hits stores on June 8, 2022.