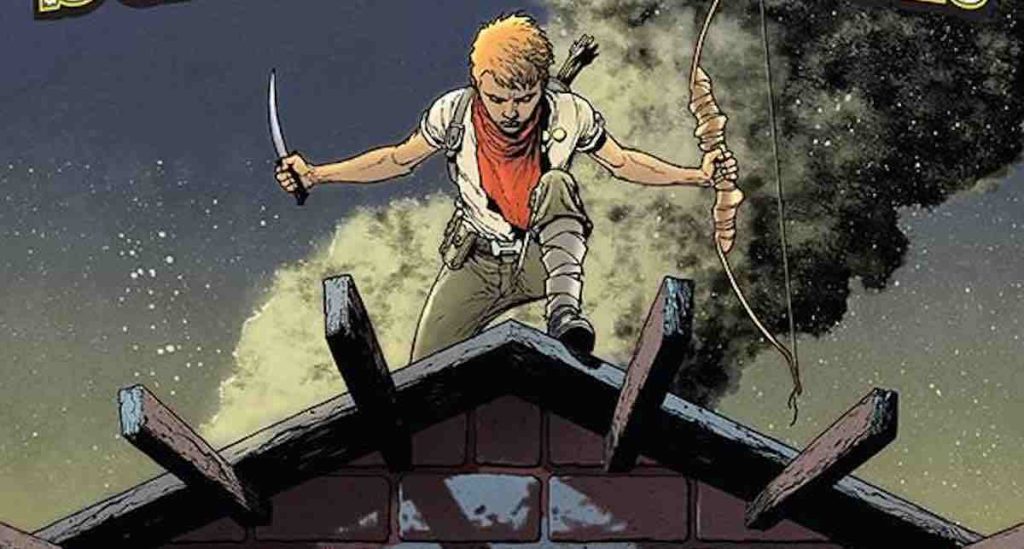 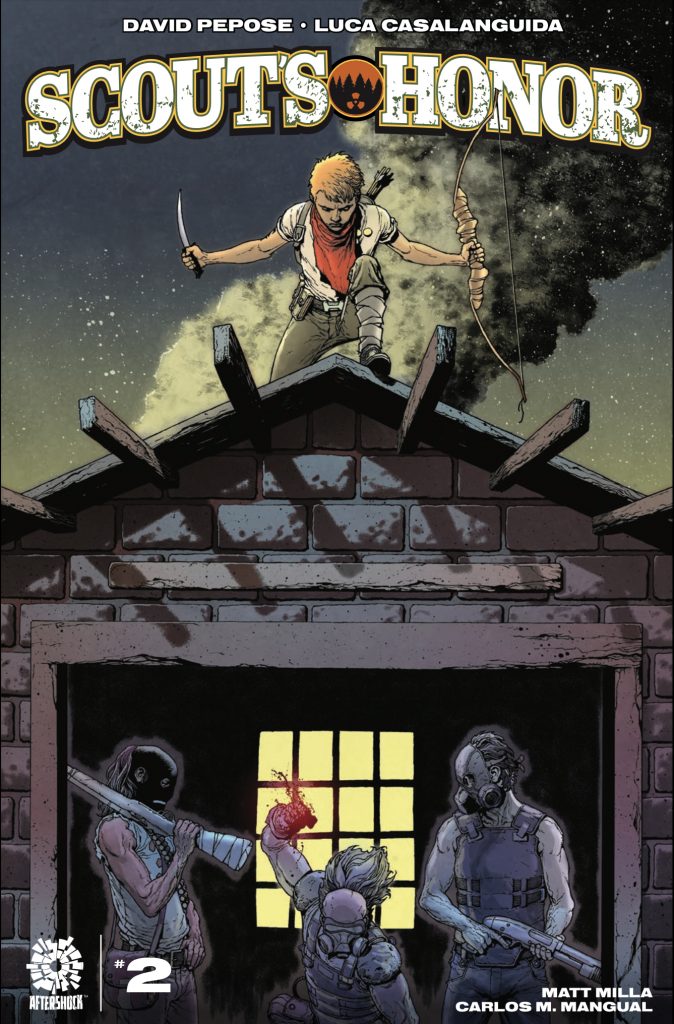 When we last left our young hero Kit, she had discovered a secret that rocked her foundational beliefs to the core. Kit had always wanted to be a Ranger Scout. To her, they were the epitome of bravery and the kind of life she wanted to live. Her father had told her early on that she could be anything she set her mind and heart to be. She believed that. The only drawback was that to be a Ranger Scout, you had to be male. Details, Details… So Kit disguised herself as a male. And over time, became one of the most decorated Ranger Scouts among them. A true example of the legacy that Dr. Hancock laid out for them.

Doctor Hancock was the founder of the Ranger Scouts. He set forth the laws they lived by, and the virtues they were supposed to uphold. It is his name they invoke at every gathering. Hancock was like their father figure. All the Ranger Scouts revered him. Kit’s father certainly respected him. Probably because, like Kit’s Dad, he was a man of science. It was thought that all members of the Ranger Scouts felt the same. At least, that was how it seemed.

Kit and her best friend Dez (the Scoutmaster’s son) were on a reconnaissance mission to track the evil Highwaymen. They had tracked them to an old military bunker which they appeared to commandeer  for themselves but hadn’t opened. Upon realizing their numbers were greater than anticipated, Kit sent Dez to inform his father and gather reinforcements. But after he had left, Kit’s position was discovered. She used all her training to fight back while eluding capture suffering injuries as she went. It was during that time, she stumbled across an old military drone. The drone somehow recognized Kit as a superior rank. A commander. It was from the drone that she that Kit learned the truth.

That their founder Dr. Hancock had been murdered. And that it was the Ranger Scouts who had killed him. Apparently, Hancock had discovered that his creation was not living up to the creed he instilled in them. Instead, the were becoming their conquerors. He tried to warn people, and they killed him for it. So, armed with that information, what was young Kit supposed to do now? 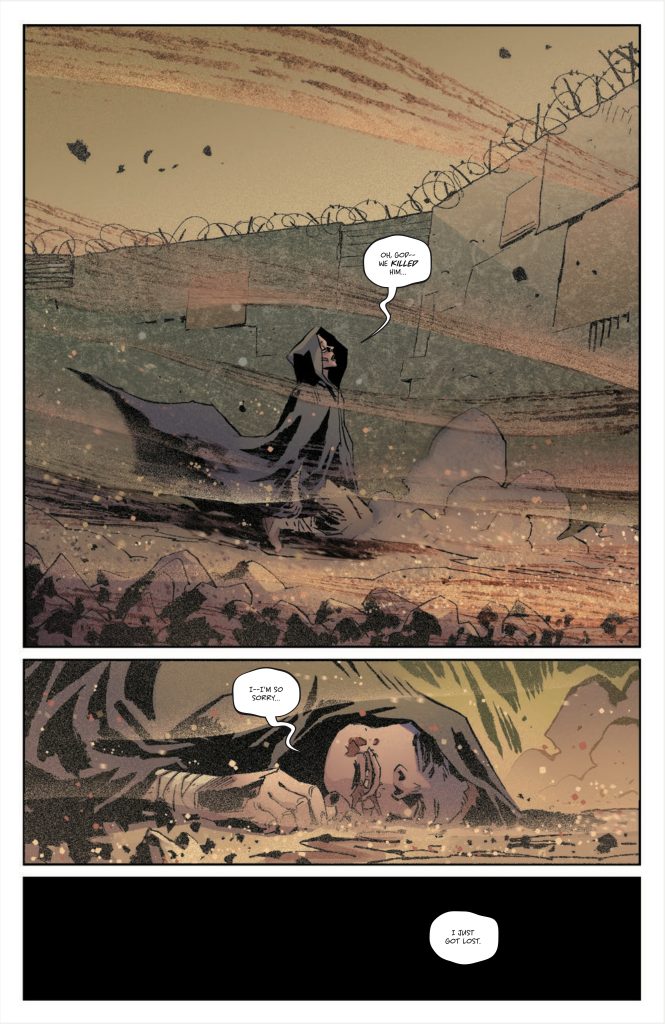 After the drone had revealed the video to Kit, it had shut down. She gathered it up in her backpack and attempted to cross the badlands. Injured and dehydrated, she collapsed. Fortunately, her Father found her and brought her home. At first, he was angry. If anyone but him had found Kit, her secret would have been revealed. But Glenn could never stay mad at his little girl for long. Especially when she produced the drone. It was pre-war and her Dad proclaimed its name as Webelo. That was all well and good but all Kit wanted was for that video to be replayed. She needed to try to make sense of it all.

After leaving her Dad to his work, she ran into Dez. He told her that the Scoutmaster wanted to see him. The Scoutmaster was always cordial to Kit. In some ways, he seemed to favor Kit over his own son. Much to Dez’s consternation. I doubt he would feel the same if he knew Kit’s secret. Regardless, the Scoutmaster was impressed with Kit’s conduct against the Highwaymen.

He told Kit that there is no shame in retreating when faced against a superior force. Dr. Hancock wanted above all else for his Ranger Scouts to survive. He then got to the main reason of his requested meeting. He wanted Kit to take part in the Eagle’s Guard trials. The Eagles Guard was the best of the best of the Scouts. Dez was already scheduled to compete in the trials. And the rules stated that only one scout per troop could be entered. The Scoutmaster proclaimed that exceptions could be made. They needed good men. And while Kit had always dreamed of becoming a member of the Eagle Guard. She refused his request. It seemed to risky. Besides, there was Dez to consider.

Back at home, Glenn was working on Webelo when Lieutenant Marston stopped by. He was wanting for Glenn to look at some converters when he noticed what Glenn was working on. Glenn, for his part, told him what it was. He exclaimed that it might hold some useful information for the Scouts. Marston left him to his work with a strange look on his face. Suspicious that was.

Meanwhile, Kit came across Dez again. He questioned if his father had yelled at Kit. The look on Kit’s face was one he was quite familiar with. He often wore the same expression when he had been the target of the Scoutmaster. Kit assured him it was nothing like that. That being the case, Dez suggested they burn off a little steam and go and visit the Eagle’s Nest. The Nest was the home of the Eagle Guard. It was a tall, dark tower with an Eagle’s head at the top. Kit revealed that it was always his and his Dad’s favorite structure on the compound. Kit’s Dad thought that it should have been impossible to even build a structure like that. But there it was. 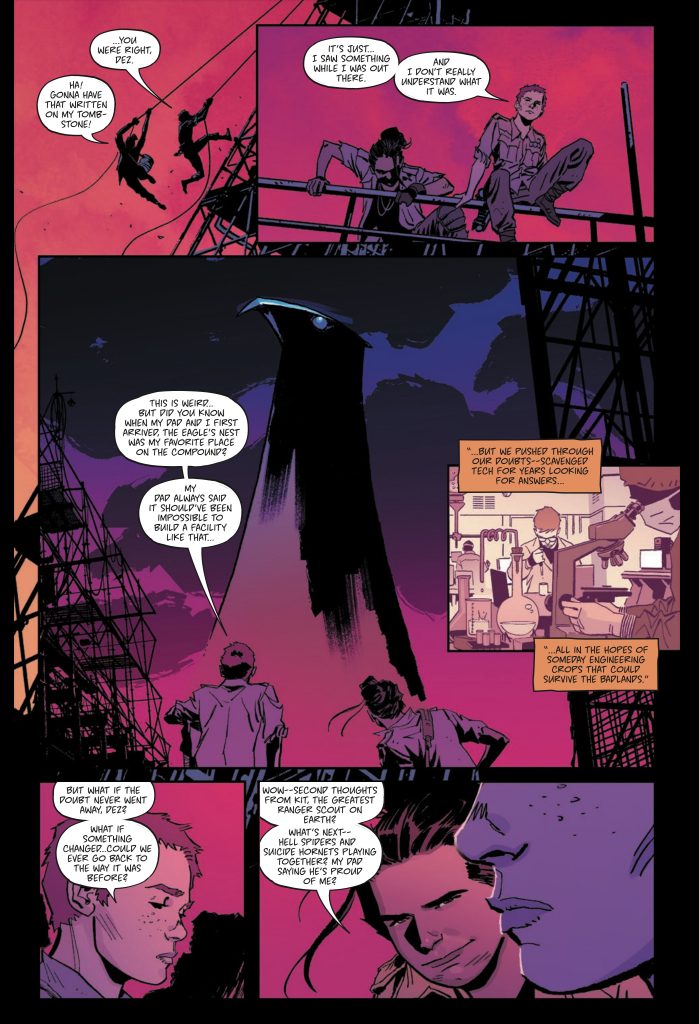 While they sat, Kit told Dez a little about of what happened in the badlands. He also expressed some questions about what it all means. Dez was shocked. The world’s greatest Ranger Scout has doubts? And what happened next was completely unexpected. Dez kissed Kit. Kit was beyond shocked. In truth, so was Dez. Kit slugged him in the jaw and zip-lined away, telling Dez he needed some air. What the hell just happened? Did Dez KNOW he was a girl? Or worse yet, Did he think he was a guy? Either way, it wasn’t good. As bad as it would be if Kit’s secret were revealed, if Dez liked men, that could even be worse. Especially in the Uber-Macho world of the Ranger Scouts. Great. More problems.

Before Kit could try to think it through, Webelo appeared. The drone still addressed her as Commander and warned her of hostiles present. Kit saw the smoke across the compound. Coming from her home. The Highwaymen had been beating her Dad, trying to find the drone he had. (I wonder how they found out about that, Lieutenant Marston?)

Kit snuck up on the house, watching as men started to leave to search for the drone. The one that was hanging closely to Kit. These men had made a serious mistake. They had harmed her father and even worse, they had pissed off a Ranger Scout. Kit plowed through the men with bad intentions, and then rushing to her Dad. She wanted to get him help. But he knew it was too late. He warned her to be careful. Don’t trust anyone. They knew about the drone and would be coming for her. Finally, he reminded her that “a scout’s truest compass is her heart.”

At the funeral, the Scoutmaster spoke well of her father, even comparing him to their founder Dr. Hancock. Afterwards, he told Kit there was no shame in taking time to morn his loss. But Kit had other ideas. The Eagle Guard trials started tomorrow. And Kit was going to take part.

Another great chapter in the Scout’s Honor series. If Kit didn’t have enough to consider as far as keeping her secret. Now everything she had been raised to believe and have faith in has been shaken. Her father had been a Ranger Scout. He had never said anything but great things about the Scouts and their founder Dr. Hancock. What could have happened to cause it all to fall apart? How many people were involved? How many knew? Who could she trust??

Writer David Pepose has written an exciting and emotion invoking tale that grabs you and doesn’t let go. There is a real skill in writing a character in a way that gets you emotionally invested in a short period of time. Pepose has accomplished this with Kit, Dez and company. If you read the first two issues, I dare you not to get invested in the story. After the 3rd Issue, I might “double dog dare you!” Also, nice blending in to the scout lore with the name of the drone. The Webelo is one of the stages of the Cub Scouts working toward becoming a Boy Scout. It is also been known to mean “We Be Loyal Scouts.” Hmmm…subliminal messaging?

Luca Casalanguida continues in his goal of winning over the hearts and souls of comic fans with his work. Mission accomplished. Casalanguida shows a great skill in illustrating down and dirty action while at the same time, capturing tragedy and even first kisses. As it were. Illustrative story telling at a high level. Put together with Colorist Matt Milla and you get a book that’s as intriguing to look at as to read. Nice work all around.

So if you’re looking for an exciting adventure, filled with Mulan like premises and emotional drama, AfterShock Comics Scouts Honor might be what you are looking for. Issue two hits stands on Wednesday, February 17th.