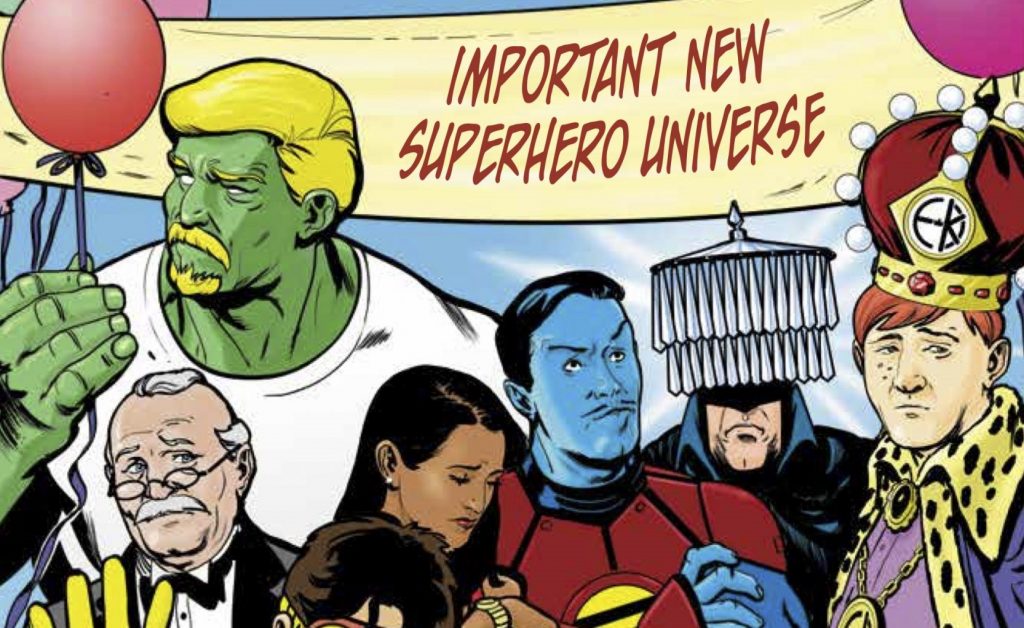 When I was a kid, there were certain things that I expected to find in every comic I bought, whether it was Marvel or DC. Exciting stories that transported the reader with favorite characters and drama filled conflicts. There would be ads telling kids that they needed to talk their parents into buying such novelties as exploding gum, x-ray glasses, and classic monster stand-ups. Not to mention the opportunity to “gamble a stamp” and get Joe Weider’s muscle book. Soon, we would no longer be a 98 pound weakling, getting sand kicked into our faces. Where do I sign?

It was with that in mind that I really appreciated Ahoy Comic’s newest book My Bad. Writers Mark Russell and Bryce Ingman have created a hilarious homage to the superhero comics of old. Already in the first issue, no stone was left unturned as they explored the classic superhero tropes. But they don’t do it with your average heroes. They have created a new universe of heroes that reflects some of the best, and the worse of the classic comic superhero. Let’s look at some examples:

Our hero, The Chandelier, AKA Jamington Winthrop, is your stereotypical millionaire super-hero. He has worked hard to conceal his secret identity while maintaining his way of life. His long-time butler Yates, knows his secret. As does a number of his close and former friends. (The “former” friends should be problematic but apparently not). However, because Jamington KNOWS that his identity is out there, it makes for a pretty paranoid super-hero. So much so that when a Birthday present is delivered to his residence, he is concerned about the contents. Especially when the package is from his arch-nemesis, the Emperor King. The Emperor King knows who he is? How could THAT be? No matter, he knows his loyal butler will open the package for him. Ummm. No! How about his just about as loyal Maid Esmerelda? Hell No!!  What to do? If you can’t depend on your hired help to open your possible hazardous gift, re-gift it! So that is what our fearless hero tries to do. Sounds like iconic heroic stuff to me.

‘My Bad, Acceler-licious’ – Hero, The Accelerator

As most people know, if you weren’t BORN wealthy, being a super-hero doesn’t exactly pay well. You need a side-gig. That’s why the ultra-fast hero from the Planet Drixon, The Accelerator supplements his income with his chain of Drixon Fried Chicken franchises, or DFC for short. Not to be confused with the slow, Earth-Bound KFC. But villainy doesn’t take a holiday just because you’re cutting the ribbon on another chicken joint. A customer comes out of the crowd and claims that he found a live rat in his drink. They should all boycott Drixon Fried Chicken, or at least until they put the RAT on the menu. (Ok, I made that last part up).

However, the Accelerator is not so easily fooled. The customer in question is actually the aforementioned Emperor King in disguise. (Man, that guy is a busy fellow). Regardless, the King tells the crowd that they SHOULD boycott Drixons. If for no other reason than The Accelerator is nothing but a bully. He once gave the Emperor King a 10 minute wedgie! How RUDE! However, the King has something for the Accelerator. His robot army is going to kick his butt. But before the King can elaborate more, both he and The Accelerator have vanished. In moments, the blue-streak has returned sans The Emperor King, who had been given a luxury vacation in Alaska. Almost makes the King wish that he had actually built that robot army. Darn it.

The one thing that both of the first two heroes have in common is their mutually shared arch-nemesis, The Emperor King. It appears he must be the community villain as he also is a huge part of this drama filled tale. It appears that The King recently had another encounter with The Accelerator that also didn’t go to well for him. Especially when he discovered that super-speed wasn’t the only tool in the Blue-Streak’s belt. He also had “super-charisma” that would make people do as he says. With that in mind, the evil genius created a trap for the Azul Speedster. One that had no off button. Just to keep him from manipulating the King into letting him loose. Sounded like a great plan. Except when you capture the wrong hero. Instead of The Accelerator, he had capture a new hero in town, Rush Hour. Protector of the highway and rescuer of those who suffer automotive breakdowns. Official Superhero of AAA. (Ok, I made that up too).

Unfortunately, while Emperor King had no issues with Rush Hour, the trap would need to run its course. Would Rush Hour survive this dastardly plot? How will people make it home safely on the Highways without their guardian of the 5 lanes? Only future issues would reveal.

As you can see, My Bad encompasses so much of what made comics, especially in the Silver Age, so much fun. With a spotlight on the different concepts and plot twists told as only Russell and Ingman can. When combined with the talents of Peter Krause, it is a book that you shouldn’t miss. I can’t help but feel a bit nostalgic as I read it, when I’m not snorting in laughter. But that’s MY burden to bear. Ahoy Comics My Bad, Issue 1 by Mark Russell, Bryce Ingman, and Peter Krause can be found where all great comics are sold. Speaking of Mark and Bryce, check out our recent interview with them about My Bad here.