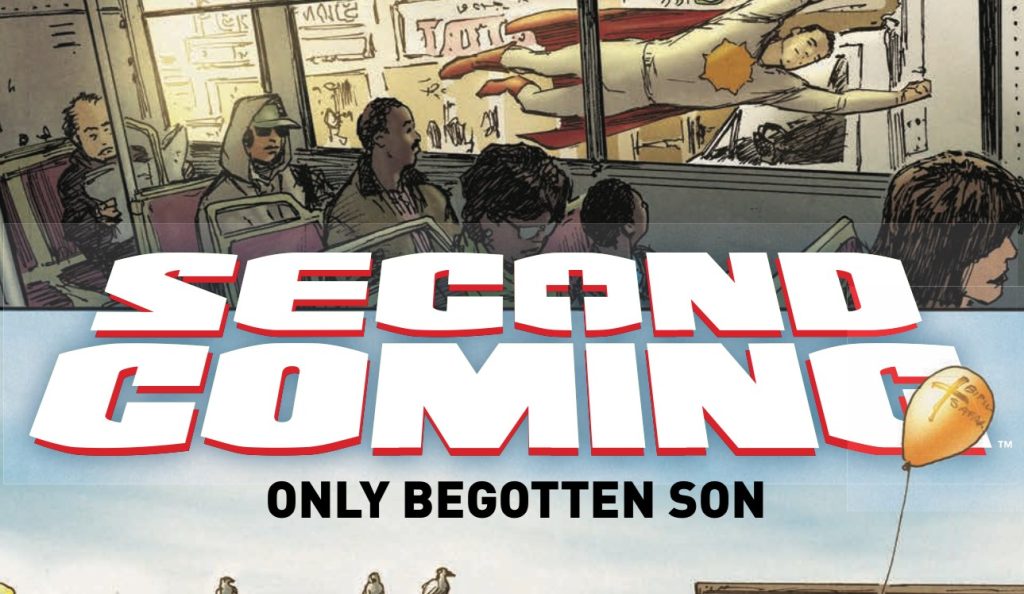 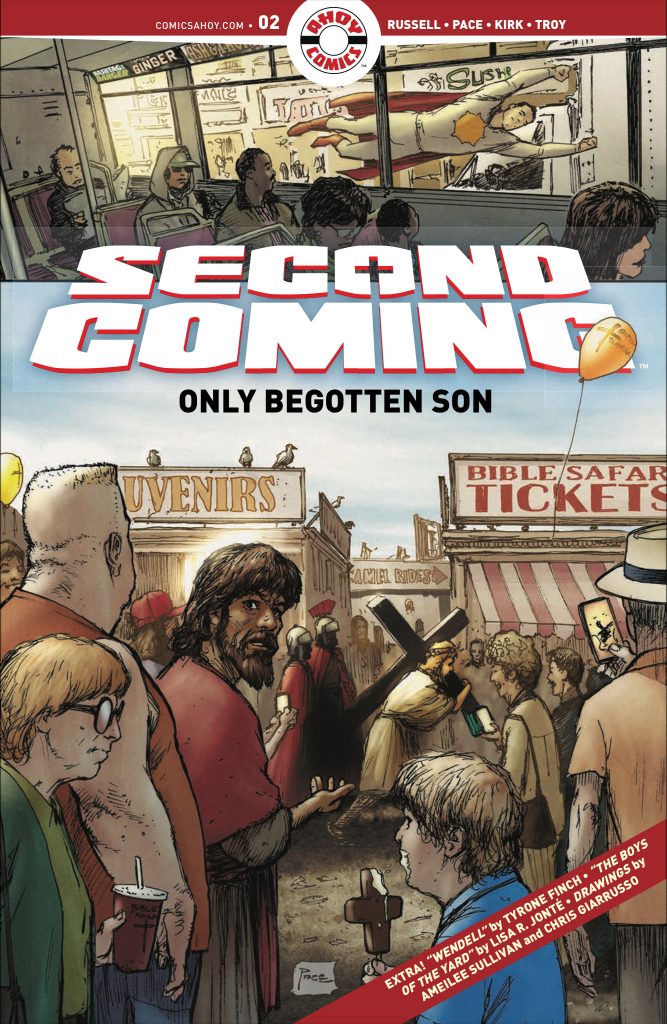 In the first issue of Second Coming: Only Begotten Son, we got to see Sunstar’s origins. Coming back to the present, Sunstar’s wife was moving closer to the birth of their miracle baby. The one that God gave them for Sunstar’s assistance to Jesus. But now, with the baby coming. Jesus needed to find a new place to live. Eventually.

Looking for Disciples NOT named Larry

As for Jesus, he was still looking for new disciples. Upon his return he found he was hard pressed to spread the good word when you have no one to help spread it or no one to spread it to. But he wasn’t without at least one. He still had Larry. Well, he can honestly say he never had a disciple named Larry before. You can look it up in the good book if you don’t believe me. So after Larry came to see Jesus, they discussed what their next plan of recruitment was. Apparently his initial disciple hopefuls fell by the wayside when he stabbed Satan at the end of Season One. Tough crowd.

So now they needed to gather disciples the old way. “Wander the highways and byways of the land on a never ending mission…” Oh wait, that was from Shazam! Basically Jesus and Larry would seek out disciples as they went. Fortunately, they found the perfect place to start: Bible Safari. A gathering place  for true believers, as long as they can afford to go. But it seemed like a good idea. A huge gathering of people looking for the good word. At least, that is what it seemed like.

Faith has Become a Profit Deal

So many changes have happened since Jesus was last here on Earth. One of the big one’s is the way that faith has become a profit deal. At least for those willing to put a price tag on offerings of faith. “Christway” was one of those establishments. It became the home of items of faith for a cost. Big sellers like “Blessing Blankets, Survival Beans, and even more incredibly, a Faith Pistol. With bullets that “have been blessed for additional accuracy.” And one might wonder why in this scenario, God has given up on us here below. The real problem is that there are people who need real help. Counseling with someone who that can help them in their faith. But it shouldn’t come with a price. Hardly what a person contemplating suicide needs to hear. 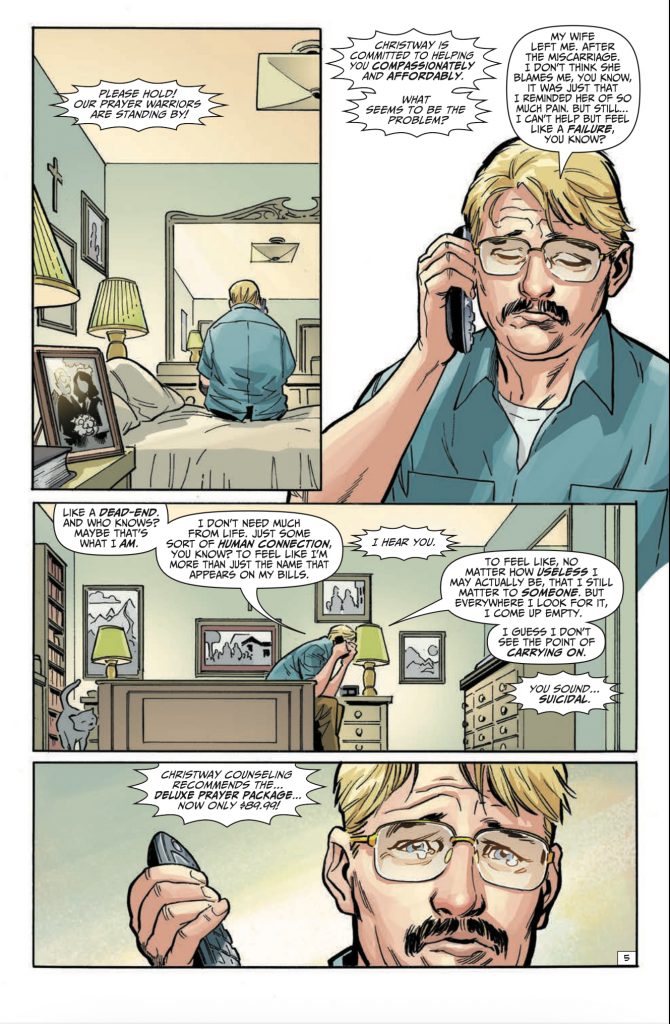 A Jesus for Every Show

But back in the Bible Safari, Jesus thinks he has found the perfect place to spread his new good word. So many people who have come to this place to find a religious experience. Jesus is their man to do just that. What he didn’t know was there are a number of Son’s of God there. Musicians, Truck Drivers, and even surprisingly enough, the ACTUAL Son of God. Somebody slipped a ringer into the crowd. But, when it was time for one of the S.O.G’s to make an appearance, a park worker grabbed the first Jesus he saw. What are the odds?

When Jesus came to the stage, he was greeted enthusiastically. What a change from how he was greeted in his previous visit. It was thrilling. Hopefully they would feel the same after he spoke to them. Because change was the word he needed them to consider. They could no longer depend on God to help them. Through their own actions, God had checked out on them. God’s children are no longer children. In fact, they are no longer God’s. They needed to grow up. If they wanted to better their lives, they would need to help themselves. Surprisingly enough, now as then, people didn’t want to hear that. His once supportive crowd had become rebellious, and angry. Apparently some things never change.

Because of the uproar, the camp security had realized they had a “rogue Jesus” on their hands. To make matter worse, camp security were dressed like Roman Soldiers. History was repeating itself. The difference here was he had no intention just to let himself be taken. Dying for people’s sins was so last millennia. They were only able to get one handcuff on him before he made his escape. As he ran, it was almost like passing through his previous life. Scrambling from his pursuers, he saw re-enactments of the worst parts of his previous life. At least, that’s what it seemed like now. Fortunately for Jesus, that walking (or running) on water has its advantages. He was able to catch the salvation of the bus. And salvation comes in many forms.

Finding Disciples, One Person at a Time

Speaking of that, our person who was being asked to pay for help, didn’t receive it. So instead he chose to end his life. Threatening to jump from a bridge. Naturally, the situation on the bridge brought traffic to a stand still. Jesus decided to get off and see what he could do. In the meantime, the people who were waiting grew frustrated and were almost begging him to jump. If God hadn’t turned his back on them, he probably would have did it again. But Jesus had other thoughts. He decided to use the handcuffs he was wearing one side of, locking the other on the man’s wrist. If he jumped, he would have company. As they talked, it all came down to would he let other people’s expectations rule his life.   In the end, it was all about his soul. He didn’t want to take his own life. So Jesus would leave with him, and they would figure it all out, together.

There is so much to unpack from this issue. Writer Mark Russell absolutely kills this chapter. With looks at the monetization of religion, the cruelty and the lack of compassion for those who are suffering. Sounds like life on Earth to me. And the sad part is, it’s not far from the truth of things. If one were to question how God could let some things happen, this narrative could certainly explain that. Even God has his limits.

It also explores the idea that Jesus, due to his last visit, may have a case of PTSD. Considering what he went through on his last trip through Shangra-La, it certainly wouldn’t come as a surprise that he was traumatized by the events. Even GOD couldn’t get over it (see season one for the details). However, I would be remiss if I didn’t mention one of the greatest lines ever in this issue. As Jesus leads the suicide threat away from the bridge, the crowd is incensed that he didn’t jump. I guess they felt like he owed them that much from inconveniencing them. Jesus tells him: “Ignore them, for they know not what they do. And if they do…they’re assholes! Either way, Ignore them.” Well played Mark Russell…well played 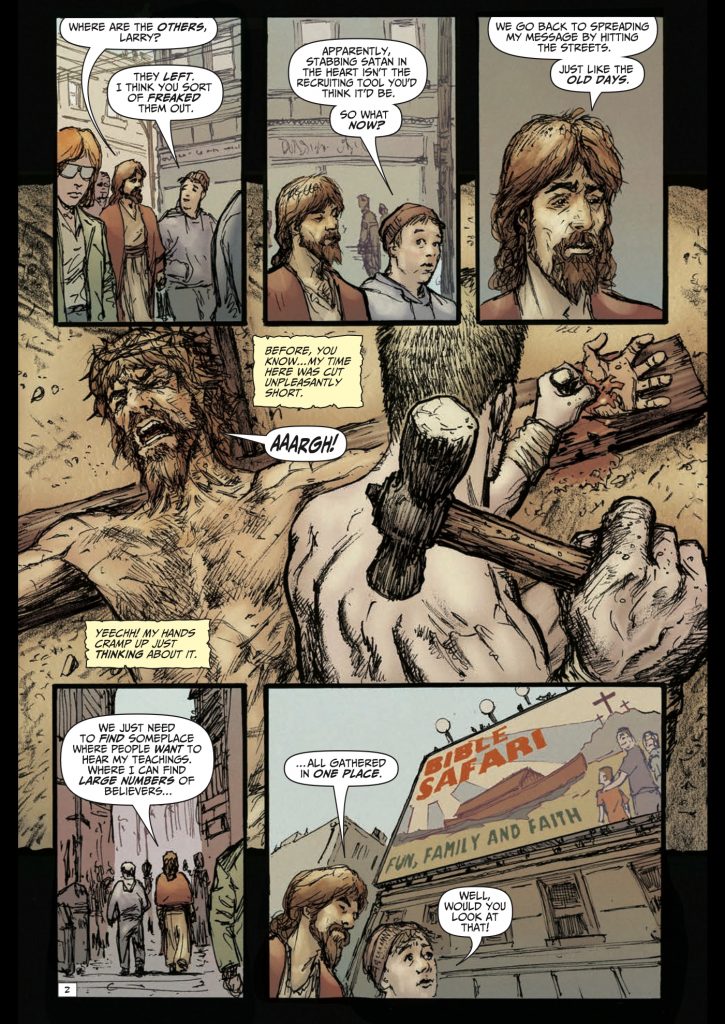 As always, Richard Pace illustrates the story with his typical powerful biblical style. Which is an interesting dichotomy when contrasted to Russell’s occasional whimsical musings. Put it all together and it makes Second Coming: Only Begotten Son unlike any other book in comics. And that is definitely a good thing. So, if you want to see what all the fuss is about when it comes Second Coming, Issue Two is a great place to start. Perhaps it will inspire you to catch up on what you missed from Season One. Second Coming: Only Begotten Son releases on February 17th, from Ahoy Comics.