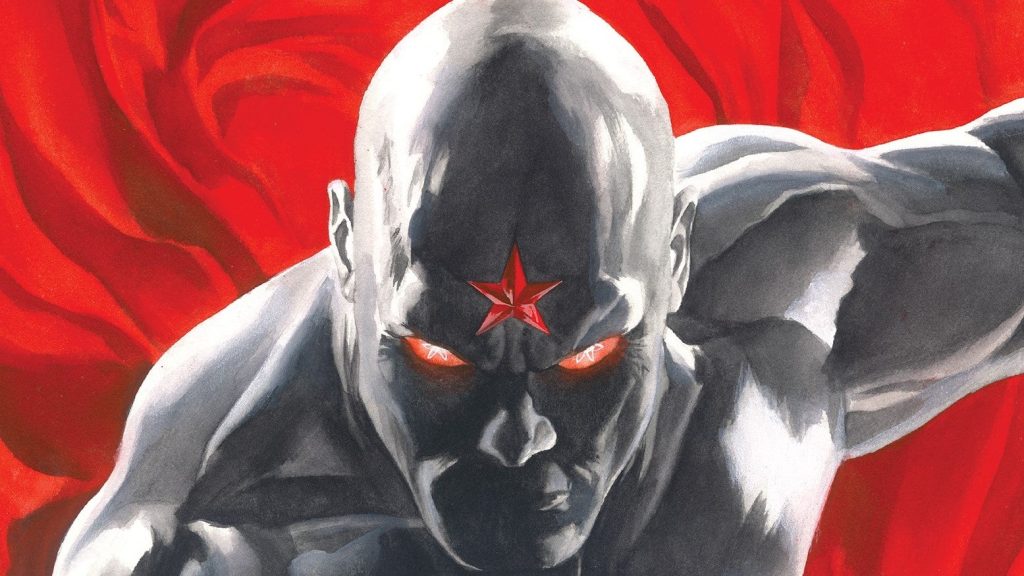 Back on November 8th, 2021, Sal Abbinanti and Andrew Dabb launched their Atomika, God is Red Kickstarter campaign. It was a complete Omnibus of the original Mercury Comics 12 issue series that Sal and Andrew collaborated on. For anyone who participated in Sal’s The Hostage campaign, they know that he makes it a point to give the fans who participate a tremendous “bang for the buck.” This was true for Atomika as well.

Throughout the campaign, more and more special items were added as each stretch goal was reached. By the time the campaign ended, a reasonably small investment returned a plethora of goodies. So, after all was said and done, navigating through supply chain issues and pandemic related roadblocks, I received my book on July 15th. And to say it was worth the wait, was an understatement. So, before we get into a review of the book, let’s look at what all came with the hardcover edition.

First and foremost, is the book itself. Beautifully produced in vibrant red with a ribbon cloth bookmark added. It was a joy to behold. It also included Sal’s signature (which I am admittedly drawn to).

Of course, If it was just the book, that would have been great. Also included were four Atomika trading cards, a number of Soviet style “state” stickers (in keeping with the Russian setting for Atomika), along with a Mercury Comics and Atomika Logo Sticker. But as they say in the “as seen on TV” ads, “that’s not all!” Added in were card stock bookmarks done by various artists, a Mercury Comics Key Chain, as well as a hand painted postcard by Sal. Nice!

Finally, Sal’s sketchbooks for both his books The Hostage and Atomika were included. As I said, for a reasonably small investment, that was a lot of great content.

Now, that the contents of the Atomika Campaign package have been explored, it’s time to talk about the book itself.

The story of Atomika touches on what happens when humans play God. At least one human anyway. Arohnir was the ruler of the dark void beneath Russia. It was under his machinations that a God would be created. One that the people could have faith in but still focus on the state. In Russia, even in 1929, the STATE was everything. And Atomika would be Arohnir’s symbol of the state. The perfect combination of the power of the old and the technology of the new. “God Created Man, Now Man Created God.” Though it cost him everything, Atomika reveled in his power.

A Creation Beyond Control

So much so that Arohnir knew that controlling his creation had become problematic. Atomika did not heed his wisdom nor do what he was told. At least not as the years went by and Atomika’s power grew. It soon became apparent that Arohnir would need to find someone or something to bring his “son” to heel. This became difficult. For no matter who Arohnir threw against Atomika, they would meet with ignominious defeat.  In fact, he found it insulting that his “father” even contemplated trying to replace him with such inferior beings. No matter, Atomika reigned supreme.

But Arohnir had other machinations in place. Who better to replace Atomika than his son? A child spawned from his battle with Baba Yaga. He was known as Chernobyl and if it could be said that a God loved his offspring, then Atomika loved Chernobyl. He would raise him to be the best version of himself. At least, until Arohnir laid claim to the boy. It was a clever move. As long as he had Chernobyl, Atomika would do what was asked. For now. But make no mistake, Chernobyl was meant to replace his father. A god who followed Arohnir’s orders.

The battle was inevitable. But while Chernobyl had the advantages of youth and perhaps even power, Atomika had the advantage of experience. Something that he had hoped to pass along to his son. But Chernobyl thought himself above that now. Nothing his father could say would be of interest to him. Thus, it came to pass that as much as it grieved Atomika, he would have to face his son. He would defeat him as he had all others that were put before him. Although, never had a victory tasted so sour in his mouth.

Atomika knew that he too would have to face his father figure. For all that had transpired, Arohnir must die. It is during this conflict that Atomika realized the truth. Arohnir was a man, pretending to be a god. He fought like a man…and he died in the same manner. But how could HE be a god if all he wrought was destruction. The people needed no such kind of God. Least of all to give their devotion to. No, he would leave this place to let them find their own place. Their own Gods.

Sal Abbinanti and Andrew Dabb created a tale that reflected much of the grand scope and mythological nature that made Marvel and DC’s stories such as Adam Warlock and Dr. Strange so popular back in the day. But what makes Atomika, God is Red different is the diverse and powerful use of media that Abbinanti excels at. Vibrant colors, unique perspectives, and at times disturbing imagery combine into telling an expansive, almost biblical narrative. Abbinanti displays a no holds barred approach to his art that makes Atomika unlike anything before or since (unless you count his book The Hostage).

It is no small task in keeping up with the visceral world that Abbinanti created. But Andrew Dabb met the challenge. Exploring the depths of religious themes and the questions of what came first, God or Man. While also creating excerpts of a religious text to anchor it in the “Codex of Agony” which was a nice touch. Overall, a brilliant look at what makes a God, or at least one interpretation of one.

If you haven’t had an opportunity to check out Atomika, God is Red, you should. Better yet, see if you can find Abbinanti and Dabb’s Omnibus edition.