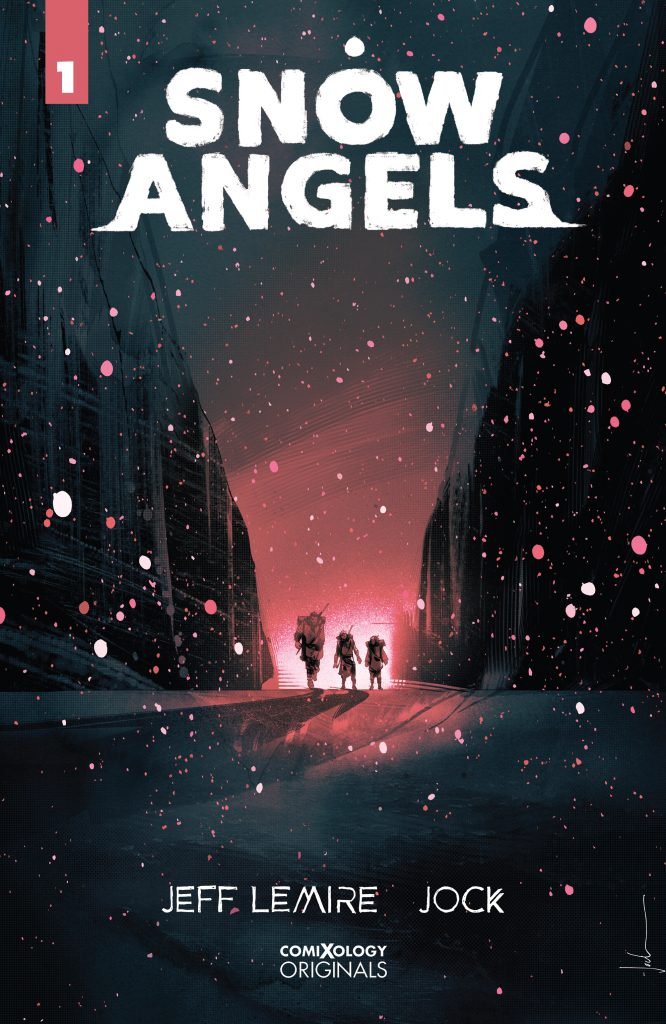 Imagine a world where there is ice and snow in every direction. As far as the eye can see. It never changes. And the only safe Haven amongst this cruel environment is called the Trench. A path that leads through the frozen earth in a never ending channel. Think of the trench run in Star Wars, except there is nothing but ice instead of blasters. The Trench has provided for inhabitants for as long as anyone can remember. It is their salvation. Welcome to the world that writer Jeff Lemire and artist Jock has created. The world of Snow Angels.

There are three rules that govern the Trench. Children are taught this from their birth. These rules are not to be ignored. They mean the difference between life and death. Such is the ways of things. Milliken has known this for 12 years now. Her father had drilled the rules into her since she was old enough to understand. To both her and her sister Mae. Dad told them the rules for the Trench went like this:

Rule#1: The Trench Provides. All we need to keep us alive can be found growing in its walls, swimming under the ice, or in gifts the Colden One has left us.

Rule#2: You must never, EVER leave the Trench. There is only death outside of the Trench. The winds up there would rip the flesh from your bones. And there ain’t nothing but ice in every direction anyhow. And worst of all, leaving the Trench means waking the Snowman, who waits out there in the ice. Death Incarnate. (Nothing like having a boogie man to fear).

Rule#3: The Trench never ends. It stretches on forever in both directions. To try to find the end of the Trench will bring you only death and madness. So better stay close and be happy with what we got. 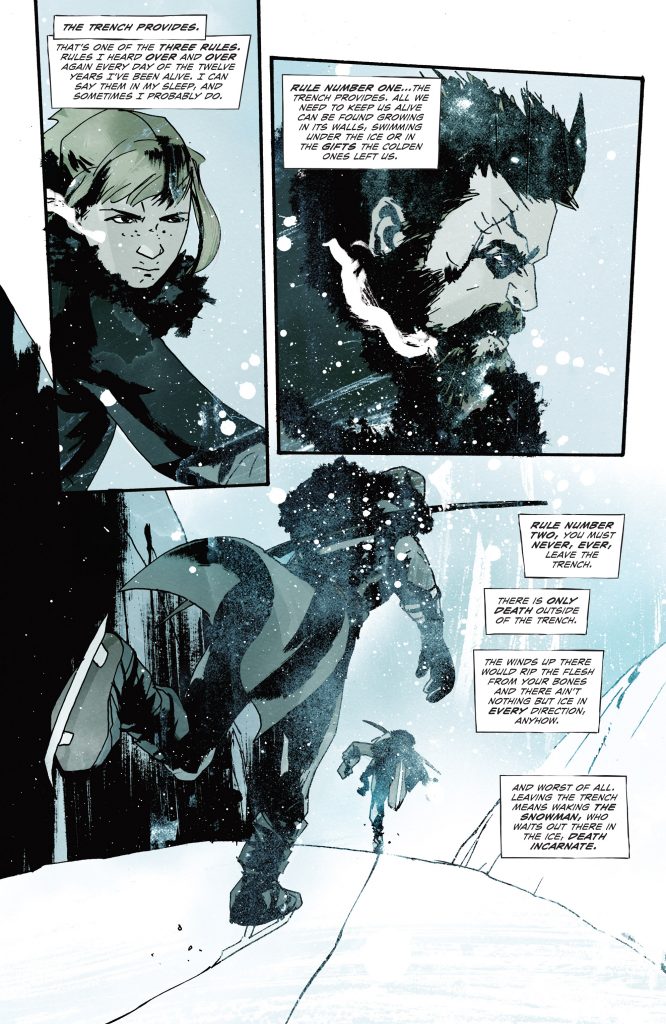 But today, Milliken had reached her twelfth birthday. She was looking forward to going hunting. Just her Dad and her. But of course, Mae Mae had to come along. Milliken thought it was because they couldn’t find anyone to watch her who could stand her endless prattle. Nonetheless, they skated down the Trench. Skates were the preferred method of travel down the endless Icy ground. They had traveled for quite a while when the came across a Trenchdog. Milliken did as her Father trained her to do. She took the animal down with one shot from her bow. Mae felt sorry for the poor dog. But father explained that the trench dogs meant life to them. They honored every part of them in their use of the animal. Just as the Colden ones had taught them.

On their way back toward their home, they set up camp in a shelter to pass the night. As they sat, Father gave Milliken a birthday gift. It had come from one of the old machines and he believed it still had some of its old magic in it. Milliken turned on the device and and what appeared to be some kind of map appeared. Although neither Father or the girls recognized it as such. Mae Mae wondered if it could be showing what the Colden ones looked like. Milliken quickly dismissed the notion. The Colden ones didn’t look like lights she explain to Mae. Father wasn’t so sure. In truth, they had never seen what the Colden ones looked like. Regardless, he suggested that Milliken turn off the device before its magic runs out. Besides, it was dark and time for sleep. Of course, Milliken couldn’t help but warn Mae about the Snowman. And Papa couldn’t help but remind Millie about him too.

They resumed their journey home, still carrying their kill for the community. When they arrived, there wears no one to meet them as usually happened. It was concerning but not totally unheard of. So they continued in when they found the bodies. Someone had been here while they were gone. And they were not kind. As Papa perused the carnage, he heard a distinct sound. The sound of skates on the ice. Someone was coming. But the skates on the ice sounded different than anyone Papa had heard before. That couldn’t be good. He quickly to the girls to hide. Under the bodies of the dead. They didn’t want to but Papa demanded them to obey him. Hide and be quiet. As they waited, they heard the skates come to a stop and saw what they had always hoped was just a story. The snowman had arrived and he would no doubt kill them all.

Writer Jeff Lemire sets the stage for this tale early on. His description of the Trench and the rules that applied to it made for a foreboding start to the story. Mix in the possibility of a monster or creature waiting to punish you for going where you are not supposed to go and you have the stuff of children’s nightmares. Then if that wasn’t bad enough, you blend in the barren environment of snow and ice, which could kill you in its own right and now, even the adults are concerned. An excellent start to an intriguing tale that still has many elements unexplained. Who are the Colden ones? There obviously was some technology involved with them, judging by Milliken’s “magic” device. Why has the “Snowman” appeared and why did he kill people? Sounds like great reasons to check out issue number  two.

You can pretty much go into a project when you know Jock is doing the artwork and relax with the realization that this is going to be done right. Snow Angels is no exception. Capturing frozen landscapes while mixing in drama based tension seems like a daunting task but Jock handles it with the skill of long practiced expertise. Working in the mainly grays and blues of the frozen landscape and the dusky skies, he brings Lemire’s story alive like only he can. Only when blood makes its presence known does red come into his pallet in just the right amounts. All of which sets the tone of an ominous narrative that leaves the reader waiting for more. At least I am.