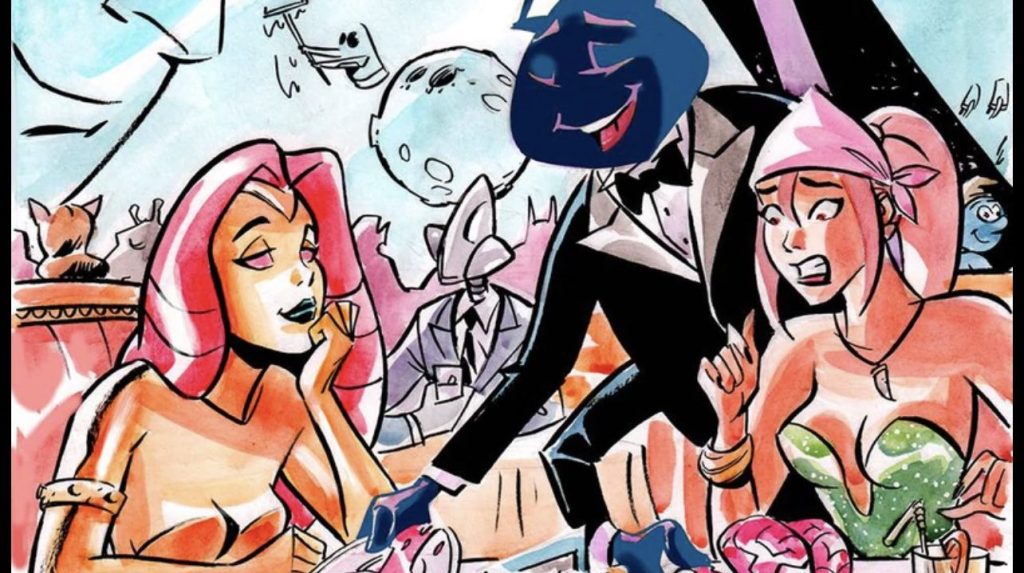 When we last left the world of Corollary, the twins who were NOT twins had accepted a job to try to get their parents released. This still required concealing the fact that Andromeda and Cass were sharing the one body they had left. The other ones’s intelligence resided as their ship’s A.I. If that secret were to be revealed, there would be serious repurcussions.

Unfortunately, that discovery remains a real possibility as the hunters from Corollary had put a tracker on their ship. Hoping to capture them and bring them back to Corollary for execution. People REALLY don’t like it when they are lied to. Especially when no twin is expected to live when the other one dies. It is the law. Kind of like Logan’s Run when you are expected to submit for termination when you turn 30. Sci-Fi writers run a tough ship. No wonder people rebel.

Their newest assignment is at Modus Ghar’s Love Godz IIZ Space Resort. That name must be continued on the back side of their business card. Regardless, the credits they are offering should be enough to free their parents. However, Andromeda and Cass have another problem. Their body transfers are taking a physical toll. According to their latest brain scans, they only have about three left. A decision must be made soon who will take the body and who will remain as the ships A.I. permanently. Not an easy decision.

In the meantime, the Space Resort has offered Cass free maintenance and a ship’s cleaning. That’s KIND of like spa treatment for Andromeda. As they proceed, Cass notices the listening bug left by the Corollary. Right after it lands on one of the maintenance crew’s faces. She blasts it with her weapon much to the chagrin of the crew member. After that, they request they enter her ship to make sure it is clear on the inside. Cass lets them in to find that Andromeda had transferred her intelligence to a female android. The service people are impressed how life-like Cass’s A.I. sounds. She needs to be careful.

An Android with Desires

At that moment, the representatives of the Space Resort arrive. They have gathered unique representatives of the twins in the galaxy. That includes the only known surviving single twin…at least as far as THEY know. As Cass went out to meet the entourage, Andromeda accompanied in her android form. They were greeted by androids that could change form to meet their guests’ desires.  This proves problematic when Andromeda, in her android form, causes one to change form. An android with desires? Hmmmm.

Cass tries to get Andromeda to get back to the ship. She is raising suspicions. Andromeda, for her part, wants them to switch back. She HATES being the A.I. But before they can decide anything, the Corollary hunters have tracked the girls ship to the Space Resort. As their ship hovers outside, the Space Resorts weapons opens up on it. Which if nothing else, should buy the girls some time. That’s when the owner and host of the station, living moon Modus requests an audience.

He wants to know how Cass survived when her twin was killed. He has a similar problem. His brother Moon-Modus Ghaz was hit by an asteroid in a freak accident. He does not have long to survive. Because of this, he wants to know the secret of one twin surviving when the other does not. But before they can even respond, the resilient Corollary hunters interrupted.

They explain that Modus has been duped. The surviving twin has been contained within the ship’s A.I. They learned of this from their listening device. It proved that the only surviving twin story was a lie. Obviously, Cass didn’t discover it before it spilled the beans.

Naturally, Modus was outraged. But so was Cass. She had had more than enough from the Corollary pests. She challenged them to a battle. One weapon a piece to the death. If Cass survives, she will reveal to Modus how to save his brother. If she dies, then Andromeda could show him. Either way, Modus wins. He agreed to this. Especially when his brother also suggested to let them fight. Moon-Modus was running out of time.

The battle commences as Andromeda prepared their ship to intervene if necessary. But while the battle looked bleak at times, Cass found a way to overcome and defeated the Corollary Hunter twins. From there, they followed up on their promise to help the twin moons. Basically, using the same technique as they used to ensure their own survival.

They transferred Moon-Modus Ghaz’s brain to the station. It took a moment to jumpstart his brain, but he found himself safe and alive on the Resort. He projected a hologram of himself to assure his brother he was intact…except for the small detail of not having a moon body. But he was pleased and to his way of thinking, never felt better.

Modus was grateful to the “twins” and assured them they could return to the Resort anytime and would have their back when and if they needed. In addition, they received their full payment. They could now go back and get their parents. At least they thought they could. But while the battle had ensued, the Corollary world had reached out to Warden Zat and paid for their parents’ extradition to Corollary. They were not finished with the “twins’ yet.

Another action filled issue with no real opportunity for the heroes or the reader to exhale. Not necessarily a bad thing. You have to hand it to the Corollary, they are persistent. Not even being blasted by a living moon will deter them. They really take this “if one twin dies, they BOTH must die” thing really seriously. Not sure why that determination was made. Perhaps it will be revealed in the remaining issues. In the meantime, writer Adam Rose keeps the narrative moving and the drama intense while still mixing in some humor along the way. (Never call the maintenance bugs, Tics!) As has been proven in the previous issues, Corollary works!

Still remain impressed with artist Robert Ahmad’s watercolor style and palette choices. Takes some chances by doing so and it pays off nicely. Looking forward to seeing how everything plays out. You should too.