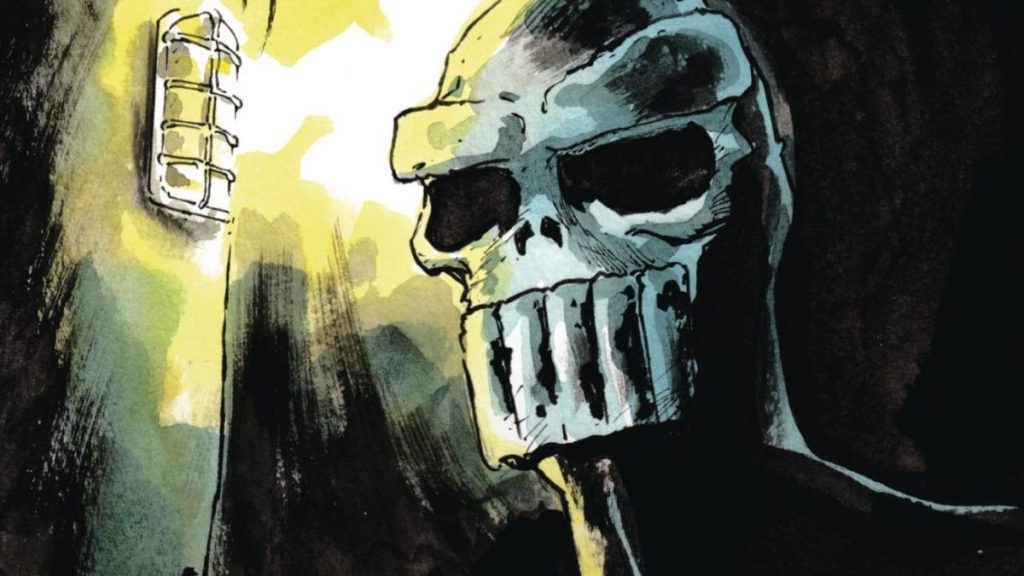 One of the most iconic and chilling scenarios in horror fiction is the helpless victim being strapped down and tortured by a sadistic and cruel captor. Throw in a faceless antagonist and no explanation for why this is happening, and you have a truly horrific scene. Such is the case in Mad Cave Studios A Legacy of Violence by writer Cullen Bunn and Artist Andrea Mutti.

The story begins with a glimpse of such a scenario. A frightened man lays strapped on a medical table with clamps holding his eyes wide open. His tormentor is dressed in black with a skull mask covering their face. While the victim cries out for mercy and an end to his suffering, his pleas go unheard. To the person (he appears to be male) instigating this “experiment,” it is just a way to prove how much a person can take. And they believe a person can take a lot!

The scene shifts to a medical facility in Atlanta. It is 1985. Dr. Nick Shaw has just arrived for his shift. He is a recent addition to the staff, and he apparently has made a good impression thus far. Dr. Shaw is directed to a patient that appears to be suffering from self-inflicted wounds. At least that is the initial assessment. But the patient believes otherwise although his agitation makes it difficult to know if he is speaking the truth or not.

But when Dr. Shaw introduces himself, the patient becomes even more agitated. He knows the name Shaw. He believes that Shaw can help him. Set him free. He explains this as he breaks free from his restraints and attempts to throttle Dr. Shaw. His wounds were bleeding profusely. All the while exclaiming that his wounds were NOT self-inflicted. Although, at the moment, Dr. Shaw could care less. All he wants is the man to let go of his throat!

Security arrives and tries to pry the man away from the Doctor. But before they can extricate him from his attacker, he whispers Unit 731 into Dr. Shaw’s ear before collapsing to the ground. Blood is everywhere including on Dr. Shaw’s hands and the patient in question is dead. What could have happened?

Now the scene shifts back in time to the year 1966. A young Nick Shaw is in his Grandparents house. They are talking, almost arguing. His Grandmother is worried about his grandfather. He is obsessing about some past event. She believes that the constant stress and worry is slowly killing him. She suggests he get some professional help. Talk to someone. He dismisses it. He cannot talk about it. About what he had done…after Unit 731.

We now return to 1985, two weeks after the hospital incident. But now, the scene is in Honduras.  Obviously shaken by the past event, Dr. Shaw has volunteered for Doctors without Borders. He is riding toward the town of Disante along with a female Doctor named Cayce Williams. The town is typical of those in the area. Stricken with poverty and children that are undernourished. The only medical facility in the area had been closed for the past 20 years. At least until Doctors without Borders had arrived.

Soon they arrive and Dr. Shaw is introduced to the rest of the staff. As far as you can call the volunteers who have set up shop here. As they walk around the facility, Shaw notices a door. Something about it seems familiar, but he cannot place it. But it does stir something.

This segways back to 1966. The young Shaw, having heard his grandfather mention Unit 731, can’t get it off of his mind. He wanders up to the attic and there finds a projector and stacks of film. One of which, is labeled Unit 731. He feeds that particular film into the projector and starts the film. His eyes grow wider as the film plays on and his face betrays the horror he is witnessing. Whatever that is…

Back to the present, a patient has shown up covered in blood, grasping his own throat. The call is made for all Doctors to assist. They are struggling to hold the patient as he thrashes wildly. Even after they lay him down on a stretcher. The blood continues to flow from multiple knife wounds. But before they can administer any first aid, he murmurs Unit 731, before he too passes away. What is going on and what does the mysterious Unit 731 mean?

Scene of the Crime

Finally, the scene fades back to where we started. This time however, the mysterious masked assailant has multiple victims in his torture chamber. Each one in a different stage of depravity. Some with eyes sewn shut. The skull faced visage explains that the patient who just died at the medical facility was just a warning. Something to get their attention. It was hardly the end.

Through the work being done, great knowledge would be gained. For both sides. It would be a “wonderous” time of discovery, and it was just beginning.

A Legacy of Violence has lain out an iconic but consistently disturbing scenario of torture and mayhem disguised under a dark veil of mystery. What is Unit 731? What is its purpose? Who is this mysterious masked man inflicting these victims with his vile experiments? And how does Dr. Nick Shaw fit into the equation? So many questions. Which makes A Legacy of Violence a must-read series, already after 1 issue. Of course, that’s what good creators do. Make the reader crave to know more. In this case, writer Cullen Bunn and artist Andrea Mutti have succeeded.

With each shift of scene, the questions pile up while the answers are just outside your reach. Waiting for some revelation to begin to reveal the reasons for these evil experiments. Not to mention why they have been going on for well over 20 years. At this point, only Bunn and Mutti know and they’re not telling. Not yet anyway.

This is not the first time that Bunn and Mutti have collaborated. They also worked together on Mad Cave’s Grimm Tales from the Cave so they are no strangers to exploring the macabre. Just as with their previous work, Mutti works perfectly in concert with Bunn’s story, using his talent for story progression and muted colors (except for the blood) to maintain an eerie and disturbing atmosphere that unsettles as much as the narrative does. In other words, perfect for this series.