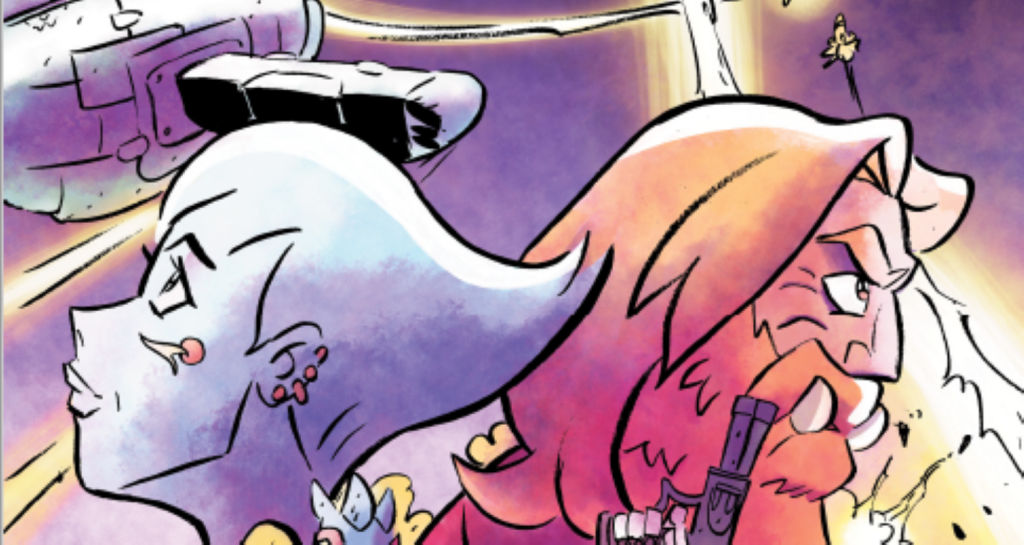 When last we left the twins “who were not twins” in Corollary, they found themselves helping the living moon Modus-Ghaz and his brother. This gave the girls a new ally and more importantly, the resources to free their captured parents. Except for one small thing. The warden had sold their parents to the leaders of Corollary. Now, to seek their release, they had to return to the planet that had condemned them to death in the beginning. A vicious circle indeed.

Of course, that was not the only thing on the girl’s plate. It seems that the procedure they used for sharing their one physical body was taking its toll. They only had one to two transfers left. After that, one would be forever locked into their ship’s intelligence and the other would inhabit the body. Tough call. But for now, they needed to go to Corollary and rescue their parents.

This would not prove to be without some difficulty. It seems the bounty that Corollary had placed on the girls was substantial enough to make them desirable targets. At least, that’s what the constant stares of the local riffraff was indicating. However, with many battles under their belt, the girls fend off those looking to cash in and head to Corollary. The demands they face are simple. Surrender to the High Command of Corollary for summary execution or their parents are executed in their place. Reluctantly, Cass agrees to this. She sees no other way put. At least, until the calvary arrives.

The OTHER Twins Arrive

As was explained in the first issue, EVERYONE had a twin in their society. If one of the twins dies, the other’s life was forfeit as well. This explained the Corollary’s interest in Cass and Andromeda and the questions of how the other twin survived. Regardless, in this case, the girl’s father’s twin had arrived: Little Orion! He also brought help with him in the form of his “better-half” Chronus their mother’s twin Ursa. Together, they cause enough chaos that during the confusion, their parent’s rushed aboard the girl’s ship.

However, Corollary was not going to let them escape with a fight. In fact, he brought the War Duke from issue one to the party. Still looking for vengeance for his War Duchess and his lost tail. With two factions brought against them, it looked bleak for our heroes. Except that the Corollary contingent were not the only group with allies. Modus Ghaz returned to bring his might to bare as well as that of the Dino Cities that Cass and Andromeda had helped (also back in Issue #1). Together they wreaked havoc on the Corollary forces.

The War Duke Once More

At the same time, the girl’s mother faced off once again with the War Duke, breaking his helmet in space. But instead of letting him perish, she saved him. Telling him that there had been enough death. Enough vengeance. The War Duke agreed and considered their conflict settled. Although he warned them not to stray into their territory again. Otherwise, he might forget the truce they had agreed upon.

During this agreement, the Corollary forces surrendered to Modus Ghaz and his troops. They also agreed to leave Cass, Andromeda and their family in peace. This left the whole family to gather together and decide what was next. They had a whole new team and the galaxy awaited.

When you have only four issues to push a storyline through, it makes for a challenging proposition for both writer and artist to bring the narrative home. In the case of Source Point Press’ Corollary, writer Adam Rose managed to tie things together nicely. Not only bringing back characters introduced in the first issues (nothing happens in a vacuum), but also leaving the door open for more adventures to come. Mixing some classic sci-fi elements with a narrative that never takes itself too seriously. By definition: FUN!

As I have mentioned in past reviews, part of that fun is the whimsical, watercolor stylings of artist Robert Ahmad. Through color choice and reflecting Rose’s innate humor, Ahmad’s work made this book far from an ordinary tale. Stepping up the volume and with unique creativity that worked throughout and made Corollary, an enjoyable romp.