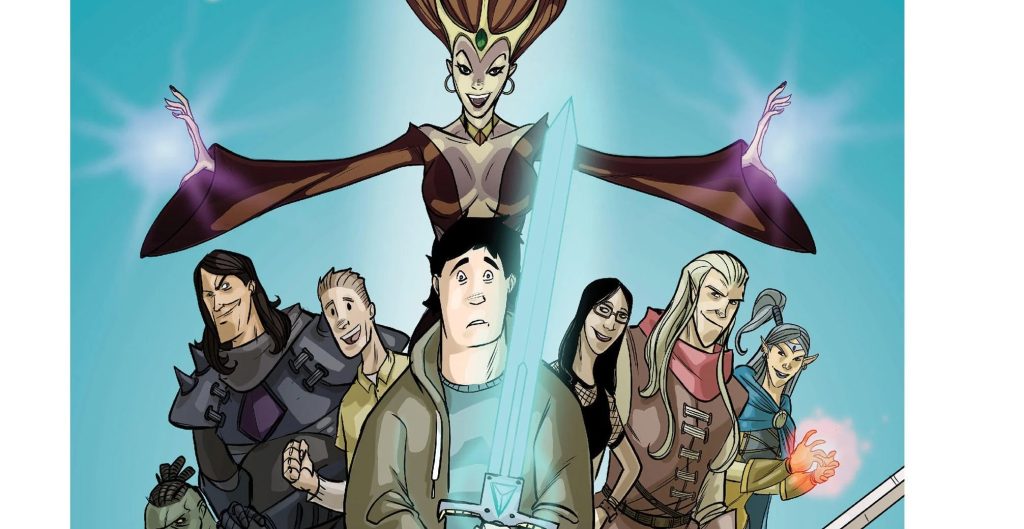 For those of you who are Billy Joel fans, you would remember his song, Scenes from an Italian Restaurant. In one of his recorded live Q&A’s someone asked him about the song and which parts came first. Billy said that the first part written was the Ballad of Brenda and Eddie. He explained that Eddie was the kind of guy who had it all in High School but it quickly went down hill from there. In his way of thinking, Eddie peaked too soon.

That is the case with the main character Jason in Chris Mancini and Fernando Pinto’s fanciful tale, Long Ago and Far Away. In his youth, he was known as the Child Knight. At least in the land of Elvenwood. With his magic sword, he was able to help defeat  Nexis, the evil Witch Queen. Thus saving Elvenwood from her clutches and bringing peace and prosperity to the land. The only problem was, that was in Elvenwood and Jason had to come back to the real world. A world where people didn’t believe in such tales. In fact, when he ever mentioned his adventures (which was plenty), they thought he was somewhat in need of psychiatric help. His Mother included.

Unfortunately, all that did was turn him into a cynical, angry older man who became…what’s the word? A major JERK! Just ask the little girl selling Girl Scout Cookies. Only his friends Phil and Marla can tolerate him and then only to a point. They have heard his Elvenwood story a million times. Which to their way of thinking is only 999,990 times too often. These days, Jason runs a comic book store with Phil and Marla as his only employees. That means, in order to maintain their positions, they have to listen to Jason’s tale over and over again. It might be okay, if they believed a word of it.

That being said, Phil and Marla are okay working with Jason for now. Phil, because he has no real ambition other than working at a comic shop. Marla because it’s money coming in. However, she at least has dreams. She wants to turn her art into working for a real comic book publisher. Despite Jason telling her she makes her heroine’s breasts too small. Whatever! However, Marla has talked of moving to New York to pursue her dream. Of course, Jason discourages that idea. That would only leave him with Phil and he’s too annoying. Pretty sure Phil could say the same thing about Jason. However, despite his boorish behavior, Marla secretly likes Jason. If only he was not so self-absorbed to notice.

After work is over, Jason returns home, where he is still living with his mother. His room is full action figures, and the “magic sword” and armor he wore as the Child Knight. As he looks it all over and wields the sword briefly, he comes to the conclusion that all of this memorabilia is junk. He bags his sword and armor up and chucks it in the trash can. Time to move on. But wouldn’t you know it, right after he disposes of the past, it comes a calling again. Two of his former compatriots from Elvenwood have appeared in the real world. They are looking for their savior, the Child Knight. Sorry boys, you’re about two decades too late. But they search nonetheless.

The Search for the Child Knight

The first place they come to is Jason’s Comic Book Store. But only Marla and Phil are there. How typical. They ask Phil for the Child Knight. Totally forgetting Jason’s many times told story, he ponders if that is a Dark Horse title? But they then ask for Jason. Marla told them Jason was not there and would no doubt show up around noon. They said they would return. After they left, both Phil and Malva therorized about the origins of these strangers. They dressed like they either belonged in a cult or a cos-play group. Perhaps, they were some more of Jason’s “special order friends.” Regardless, they had some Brunch to attend to.

Help Us Child Knight, You’re Our Only Hope

After Marla and Phil left, Todd finally came to the store, at his usual noon. The pair from Elvenwood were waiting for him. At first, Jason thought Phil and Marla were playing a joke on him or perhaps the Renaissance Fair was back in town. But they asked for the Child Knight. Jason looked at the pair but then pulled their hoods down, revealing their faces and pointed ears. He recognized them immediately. Too bad the same couldn’t be said for them. They once again asked him for the Child Knight and he told Ryan and Neela (their names) that he WAS the Child Knight. They looked incredulously at him for a moment and then commented on how much he had grown. Seventeen years will do that to a human. They accepted this and told him that they once again needed his aid. Elvenwood is dying.

The Sword in the Dump

Ryan and Neela ask Jason if there was somewhere they could talk in private. He thought for a moment, knowing that he shouldn’t leave the Comic Book Store…but he did it anyway, taking them to his house. Ok, it his Mother’s house, but you know what I meant.  But before Jason could start to hear from Ryan and Neela, Marla and Phil showed up. Phil looked at the pair and reached up to touch one of their ears. That was no, no! Once Jason made it clear that his friends were ok, they explained that they needed Jason and his magic sword one more time. That’s when Jason had to admit that he had thrown it and his armor away. If only Ryan and Neela had arrived a day sooner. The sword needed to be found. Even if it meant some dumpster diving.

However, Jason and his posse were not the only people looking for the sword. Queen Nexis had sent two of her minions in search of the sword as well. The race was on who would claim it and then if that all went well, the battle to save Elvenwood. Would Jason find the hero he once was? Or was he gone forever, trapped under age, cynacism and bitterness for all time? What would Jason and his friends be willing to do to save the day? Such is the tale of Long Ago, and Far Away.

Beyond the classic adventure of good vs evil and the recovery of one’s self worth, Chris Mancini’s Long Ago and Far Away packs in a pleathora of geek inspired nods to just about every genre. If a gathering of friends ever debated anything in the pop culture world, Mancini touches on it. Whether it be the quality of Marvel’s Agents of Shield (He almost lost me with that one), the films of Zack Snyder or the wisdom of Alan Moore, Mancini touches on it with the banter that all friends will recognize. Although, Jason’s slam against Archie Comics almost got his butt kicked by an 8 year old. Don’t mess with the folks from Riverdale, Jason.

In addition, references to John Byrne, Jack Kirby, as well as useage of catch phrases like “It’s Clobberin’ Time” find their way in and bring out a smile in their inclusion. (That particular one was used in a way that might change how you envision it). But Mancini also brings reference to our enslavement to technology and the noise that we as a society have grown accustomed. All with a nod and a wink.

Bringing all of this to fruition is artist Fernando Pinto whose whimsical style works beautifully with Mancini’s smart sense of humor and the world of Elvenwood. Another case of writer and artist melding together to make the whole even better than the parts. Especially when the parts were outstanding on their own. Fortunately, by the epilogue included, we will have more to look forward to in the world of Elvenwood. But that’s for you to read…and you most definitely should. White Cat Entertainment’s ‘Long Ago and Far Away’ by Chris Mancini and Fernando Pinto comes to stands on April 12.