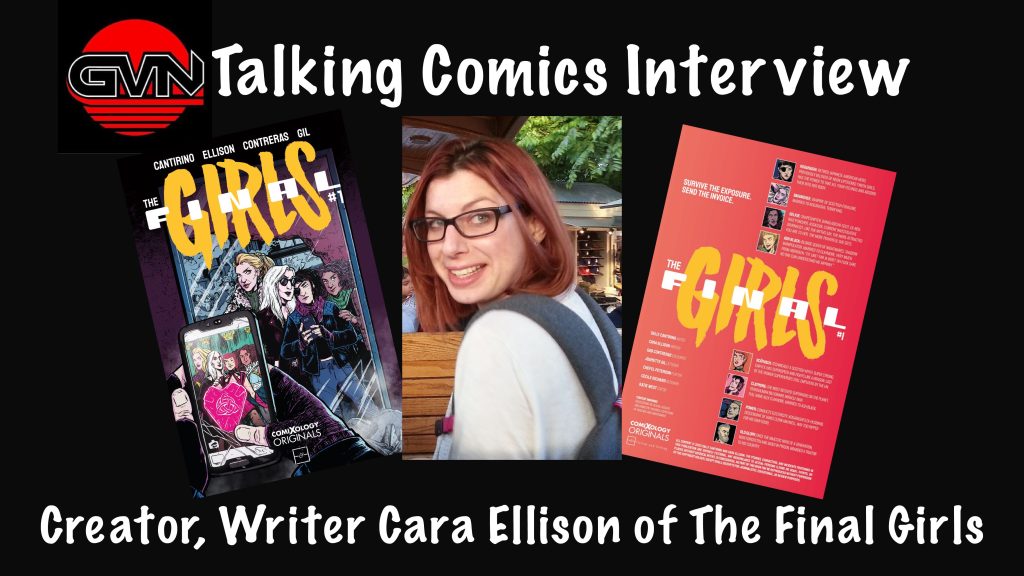 One thing that’s been proven over the last number of years is that sometimes, you must exercise patience and perseverance to get where you want to go. Especially in the era of COVID. No better example can be found than in writer Cara Ellison’s The Final Girls. This five book series has been on her plate in one form or fashion since 2015. Along with her Co-Creator, Artist Sally Cantirino, they will finally see the fruition of their hard work when it hits ComiXology on March 30th. So let’s get to know and welcome writer Cara Ellison to GVN’s Talking Comics Interview.

From Game Design to Comic Creator

GVN: Thank you so much for giving us a bit of your time, Cara. You have had an extensive career writing about gaming for various publications and have been widely recognized for your work. What made you decide to write a comic? (It was a wise decision by the way). Was there someone who encouraged you to take on that challenge?

CE: My day job has been designing games for companies like Sony and League of Geeks. But since I wrote the first Final Girls, and because most of my job is now high level or systemic game design, I spent a bunch of time worrying that my actual ground-level writing craft was getting rusty. So when I wrote this, I felt like I wanted to learn how to write in a new format. Plus, I also really had something to say in and about the specific medium of comics. I think that’s a really good way to think about format – is this the best way to tell the story? Is this the medium you should choose over all others? 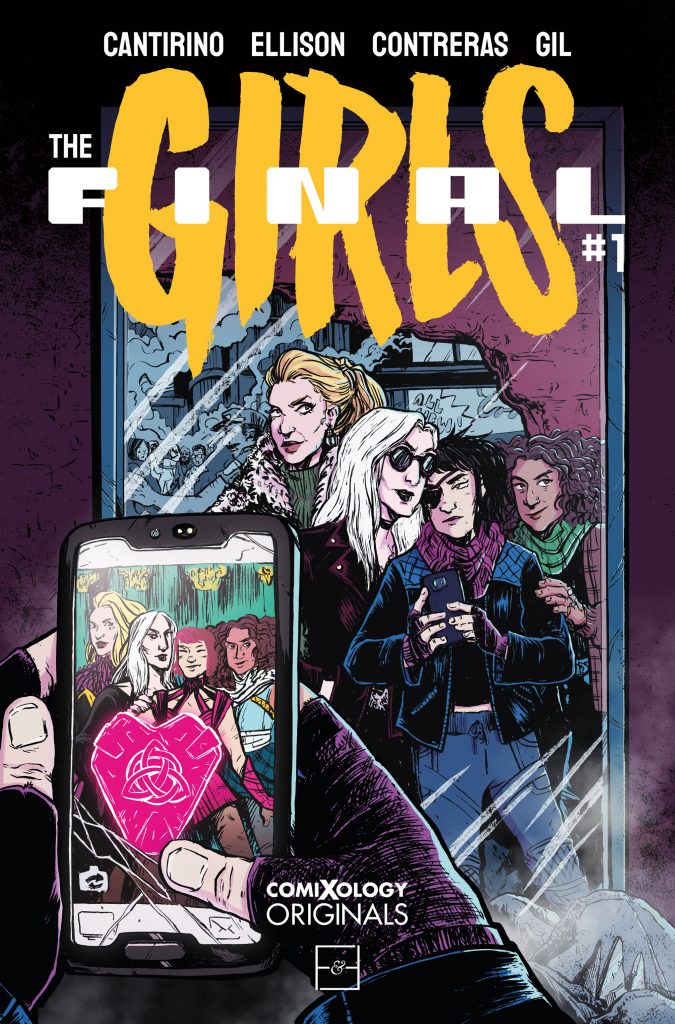 The Final Girls has to be a comic, because it is about comics and it comes from comics. It is in conversation with every comic I’ve ever read. From Gillen and McKelvie’s Young Avengers, through Ennis’ and Robertson’s The Boys, to Marjorie Liu and Sana Takeda’s Monstress. There’s a lot of anger in this comic about the voices and politics that are forgotten in a superhero comic. What The Final Girls is saying about hero comics themselves is probably not immediately obvious.  But it is my hope that it becomes clear as you start to near the end of the second issue into the third.

GVN: You started this story back in 2015. Which proves that you had some serious commitment to seeing this project through. When you started planning this series out, what were your priorities? Strong female characters? Real world problems, and emotions?  Something completely different?

CE: I think primarily I was looking to explore how superheroes could be appropriate to very modern problems. Superheroes are best when they operate on a lot of different semantic levels. In the Marvel Cinematic era, I find that a lot of the ways superheroes operate is a little vintage. It’s really fun to watch but does beating the shit out of everyone achieve that much? Captain America, for example (bless his cute butt) may have once stood for the might of the American army against the Nazis.  However,  fighting Nazis these days has become a lot more complicated. Can Cap use a computer? Is he on all the Shady Forums? I severely doubt he has broadband. What would Cap calling AT&T look like? (This comic writes itself.)

The Final Girls is about how justice for our generation has changed. I think the Netflix Jessica Jones has also really successfully approached this theme, though not in the same way. When you want to change someone’s bad behaviour, and you apply violence or shame or any punitive measure, is that really what changes someone’s behaviour? Or, for that matter,  provide a better community to live in? A lot of superheroes, for example Spider-Man, are still in cahoots with the police. Does locking people up really change behaviour? There isn’t much evidence for that.

I was interested in inventing superheroes who might have become disillusioned with the punitive nature of things, and who are working class, and are forced to invoice for the work they do to the relevant institutions. What often goes unsaid about human heroism is it looks like people who are quietly turning up to the free clinic to provide vaccinations or who are carers for people who have mobility problems and the list goes on. They often aren’t the glitzy, glamorous heroes who get amazing press and who have a beautiful arse in lycra and who Perform A Role for people to project onto. It initially felt silly to think about heroes in the mundane way.  But the more I thought about it, the more I wanted to try to write heroes who just have to turn up, even though the press spins it negatively and their work isn’t really appreciated or recognised by anyone. 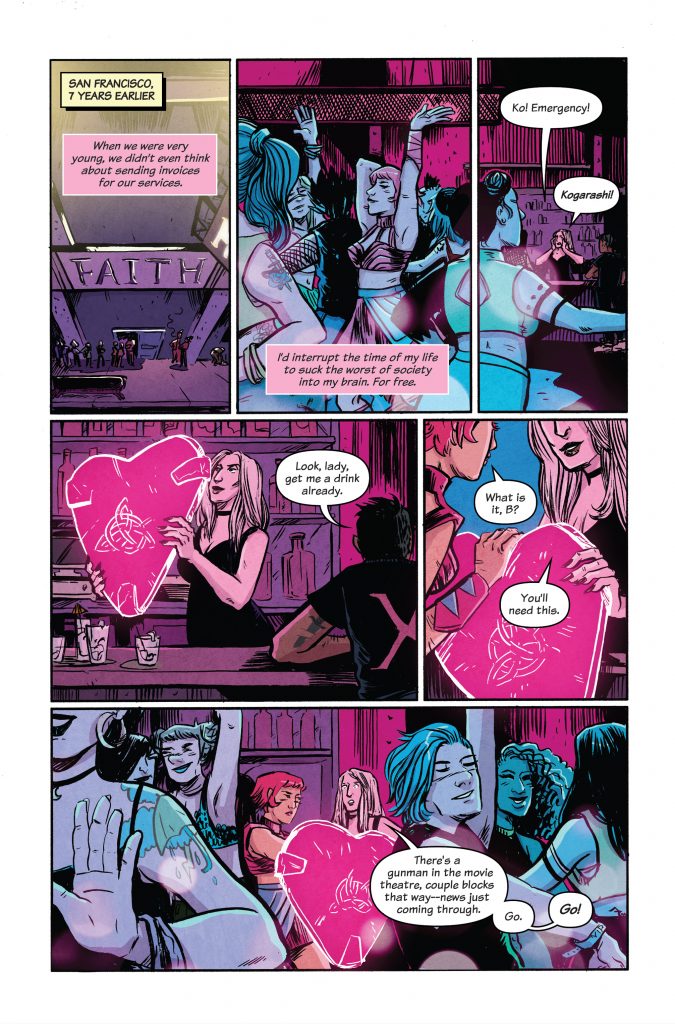 GVN: You also mixed in your Scottish roots. Your passion for that comes certainly comes through. Although I would be lying if said I understood Ash all the time. Obviously just watching the Outlander doesn’t help.😏

CE: The Scottishness of The Final Girls was also a big thing for me, because I’ve become used to my culture being really misrepresented. You mention Outlander, but Outlander was based on American novels about Scotland and adapted by an English production team. It does have a strong cast of Scots, but the dialogue is very stilted to our ears because Scots as spoken has a very different sentence structure than English does.

In the comic Ash speaks a Scots dialect called Doric (sort of the Minnesota of Scotland), which is what I grew up around. I’ve toned down her vocabulary use massively, so there’s still a chance you might be able to understand her, but it’s definitely a compromise to appease English speakers. If I were super cruel to anglophone readers I would have made her speak gaelic, but that has no relationship to English at all. I did just want to show people that we are not an ‘accent’. We tend to have a lot of different ways to express ourselves through word choice. I’m sure you’ve seen Scottish twitter, for example…

GVN: You have assembled a strong team of female creators for The Final Girls. Was that your plan from the beginning and how did you select who you worked with? Did you have any familiarity with any of your teams previous work?

CE: Our team is actually made up of non-binary and women creators, but no men. I guess it seemed to fit the comic – Katie West our editor assembled the team, and when we got Sally on board I was really impressed with how her characters innately looked like they wanted to smash something. She has a really cool way of drawing characters that look disaffected AF. So as soon as I saw those I knew Sally would make a great collaborator.

We were really lucky to get Joamette on lettering, and Cecile our designer wowed me right away when I saw their portfolio. Gab’s colours were always on my radar. I love Gab’s work. It’s just incredible. We had a loch in one panel of the comic and she made the water and sky mirror each other with all these blues and even though I don’t think Gab’s ever been to Scotland Gab and Sally made it look just like how I remembered.

GVN: It is definitely some impressive work. So now you are a comic writing professional. Do you have anything new on the horizon you would like our readers to know about?

CE: I don’t have another comic lined up as this one took from 2015 to now to release! But I am in love with the comics format and I have been thinking about writing something much more trashy and a lot less thoughtful next time. I spent a while thinking about a vampire comic, but it will have to stew a while in my brain. Otherwise, I have multiple videogames to design, which is equally as exciting as comics, and only slightly more risky…

GVN: Thanks again, Cara and we’ll be looking with excitement for The Final Girls coming March 30th on comiXology.