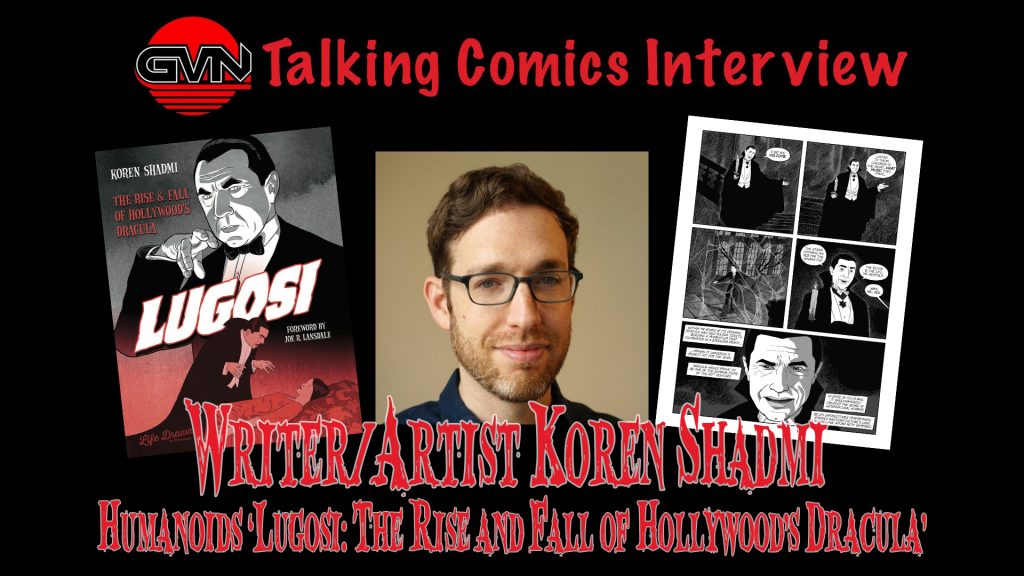 Lugosi: The Rise and Fall of Hollywood’s Dracula

When you think of the classic Universal Movie Monsters, the first two that generally come to mind are Dracula and Frankenstein. Not to mention the iconic actors who portrayed them, Bela Lugosi and Boris Karloff. Not only did they set the benchmark for these characters but they also became synonymous with the horror films of that time. But did you know that Lugosi and Karloff didn’t always get along? Or that LUGOSI was originally supposed to play Frankenstein in the classic film?

If not, then the upcoming book by Humanoids, Lugosi: The Rise and Fall of Hollywood’s Dracula by Koren Shadmi is definitely something you should check out. Koren explores the early days of Lugosi’s career and his huge break when chosen to recreate his stage role of Dracula for Universal. By the time you are done, you will know much more about the actor and his relationship with Karloff and others. Not to mention his personal struggles and demons that he faced during his long career.

In preparation for the books release, we recently had the pleasure of getting some time to talk to the talented creator behind the book. So let’s welcome Koren Shadmi to GVN’s Talking Comics Interview.

GVN: Thank you for giving us some of your time, Koren. First off, let me say that your choice of subjects in your biographical graphic novels has been spot on. I’m a big fan of Rod Serling and until this day, when I think Dracula, I still think Bela Lugosi.

KS: Thanks so much! I’m glad you enjoy my picks.

GVN: But before we get to Lugosi, please tell our followers a little bit about yourself. When did you take an interest in art and storytelling and who were your inspirations starting out?

KS: Long story, I’m originally from Israel, and around the time I was 9, I started going to a local comics class. The teacher was one of the only people in Israel who was a full time cartoonist – Uri Fink. Around the time I was 15, I became Uri’s assistant. I learned a lot from him about the basics of telling a story through comics. He also had an incredible library of comics in his studio and I would take out new books every week. He introduced me to some of the greatest artists and writers in American comics, like Frank Miller and Alan Moore. In my later teens I discovered European comics artists such Moebius and some of the underground folks like R. Crumb, and that expanded my view out of the superhero ghetto. I was making comics all during my teens and publishing them in local Israeli magazines. I hope that stuff never sees the light of day again.

GVN: You have done not only books about Rod Serling and now Bela Lugosi, but you also have written about one of the co-founders of Dungeons and Dragons, Gary Gygax. How do you select who to write about and does your personal interests in either their work or their story guide you?

KS: I’m very fortunate that I’ve been able to pick my subject matter. With Gary Gygax it was pure luck. I’ve always wanted to do a D&D related project, and it so happened to be that the editor was looking for someone to translate this great biographical article by David Kushner into a graphic novel. With Serling and Lugosi, it’s a process of making long lists of possible subjects and finally zoning in on what feels would make the best book. I’m looking for drama and fun visuals, and both Serling and Lugosi had super interesting and dramatic lives.

Learning the History of Lugosi

GVN: Well as the Old Knight in Indiana Jones and The Last Crusade said, “You have chosen Wisely!” As you prepared to create Lugosi: The Rise and Fall of Hollywood’s First Vampire, did you learn things about the man that you didn’t know before and how did you decide which elements to include?

KS: Oh I learned a ton. I didn’t know much about him other than the basics. I was shocked to find that he was an activist and a type of socialist back in Hungary. Before working on the book I had never watched the original universal monster movies, so it was such a great excuse to dive into that period. As far as the research and writing go – with non-fiction subjects a lot of time the process is one of editing down a ton of material from the biographies while also finding a narrative thread in someone’s life. I had to cut out a lot, for instance most of Lugosi’s rich theatrical career. And I also couldn’t go too much into detail about all the films he made, there were about 100! So I had to pick what I found most fascinating. I first came up with the narrative frame of the book: Lugosi recalling his life while going cold turkey and trying to kick his drug habit. Everything else fell into place after I figured that part out.

GVN: One of the things that you have excelled at in these biographies is capturing the subject’s likeness extremely well. Was that the easiest part of the work (either for Serling, or Lugosi…I imagine not as many people know what GyGax looked like) or did it offer you some challenges?

KS: Not really, it was a good face to draw, very round and with that pointy nose in the middle. He was quite handsome in an old Hollywood kind of way, and I tried to bring that into the book, rather than make him into a cartoon. What I did find out was that Boris Karloff was even more fun to draw!

GVN: I can imagine. Another one of my favorites. So, what can younger readers, who might not be familiar with Bela Lugosi take away from your book?

KS: Kids, Don’t do drugs! Joking. I hope they would enjoy the story, and maybe even watch some of the films he was in. Some of them are a lot of fun. Others are terrible! The book will give you a good started guide.

GVN: As you structured the narrative, you have chosen some brilliant scenes in Lugosi, including his talking to people from his past in his Hospital Room. Were such visions any part of Lugosi’s recovery or was this just a clever literary device on your part? Either way, it was well done.

KS: Clever literary devices. It was mentioned at some point that late in life he had nightmares where Boris Karloff talked to him and mocked him, so now that I think of it, there’s a kernel of truth there. I just thought it would make a nice visualization of his struggles with his inner demons.

GVN: I served that function very well. Lugosi is your second book with Humanoids. Why has that collaboration proven to be successful?

KS: Humanoids did a great job with helping me produce both books, they are the ultimate combination of American comics making ethics with European production standards.

GVN: Thanks for your time, Koren. Before I let you go, do you have anything new (besides Lugosi) on the horizon you can talk about? Also, where can fans connect with you online or on social media?

KS: I’m finishing up another non-fiction biography about the origin of video games. The project was written by David Kushner and drawn by me. It details the lives of Nolan Bushnell – creator of Atari and Ralph Baer, the unsung ‘king’ of video games. They had a sort of feud going on between them throughout the 70’s, it’s a fun story. The book should be out in 2022 from Bold Type Books. As for social media, you can find me on all the social networks under my name or on my site at korenshadmi.com

GVN: You had me at Video games, Koren. Humanoids Lugosi: The Rise and Fall of Hollywood’s Dracula by Koren Shadmi hits book stores on September 28th.