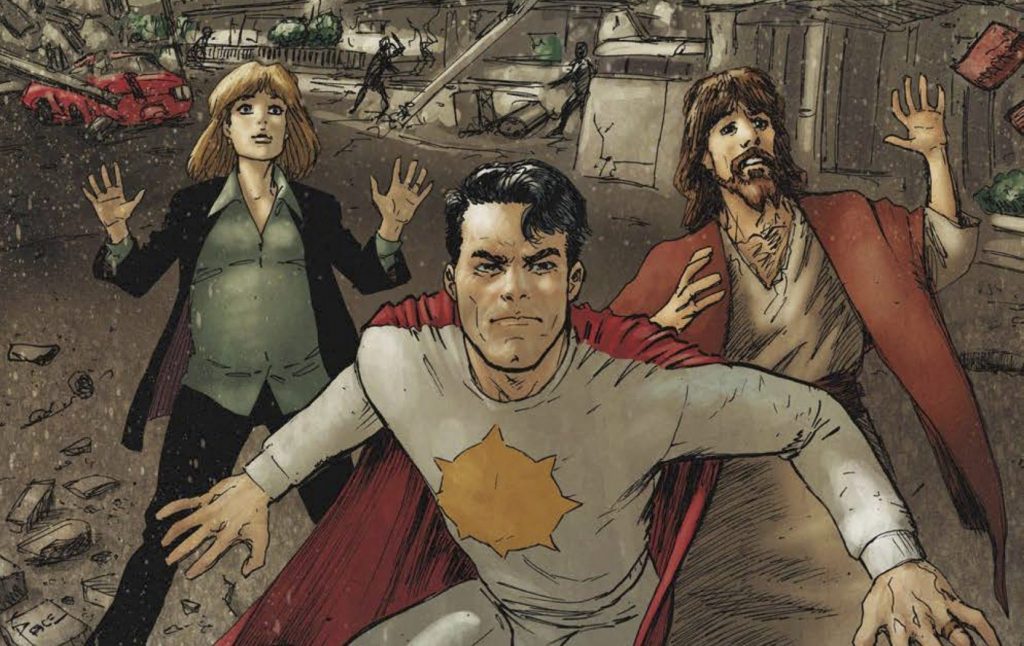 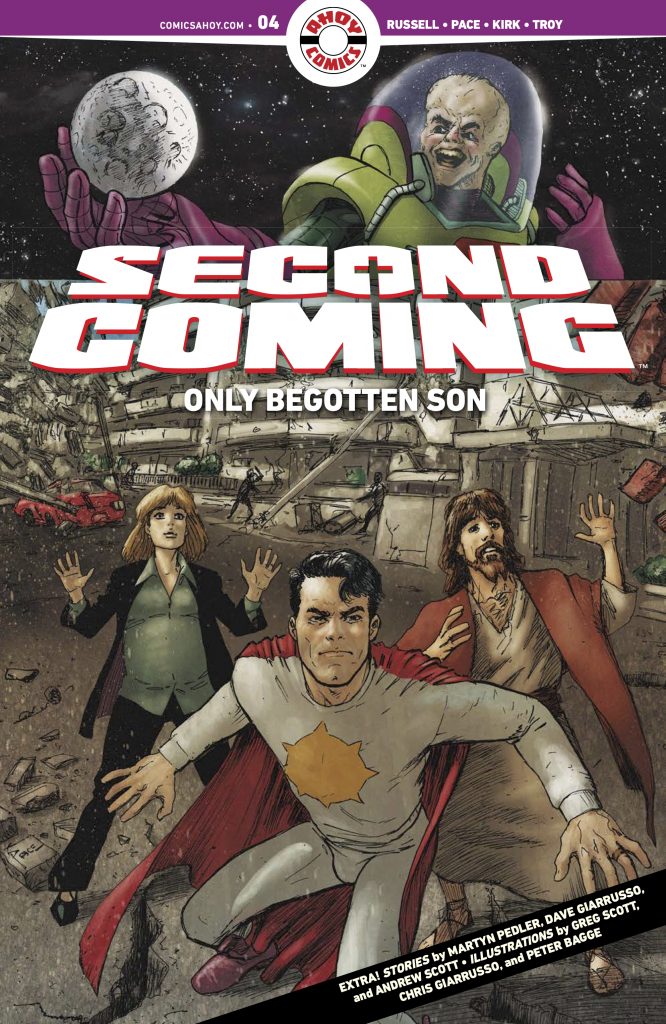 An Issue of Care

One of the hardest decisions that families have to make is when they are no longer able to care for their elderly on their own. These decisions usually come with a multitude of soul-searching and often times, guilt. Mainly because, their loved one had taken care of them for years. Now that it was their turn, they feel like they have failed. They also know that if it were up to the person in question, they would never agree to such an arrangement. Thus it should come as no surprise that when placed in such a facility, the loved one (not through any fault of their own) becomes resentful and sometimes mean. Not to mention the predilection in their confusion to wander off. In time, it not only becomes difficult for the family members to deal with, but also the senior care provider.

That is the situation that our hero Sunstar is facing. His Mother Agnes has become too difficult for the Shady Acres Retirement Home to accommodate. During her stay, she has wandered away from the facility a number of times.  They can longer take care of her. This is devastating news for Sunstar and his wife. However, with their baby on the way, they have no way to care for Agnes themselves. Not to mention the lack of room. But if they cannot take her in, their only other choice is to place her in an “End of Life” facility. Those are the options that the Retirement Home has presented them. One is impossible. The other would likely kill her. What to do? It is at times like these that the popular rhetorical question comes to mind, WWJD? (What would Jesus do?)

Well it just so happens that Sunstar brought the man himself to this conference. Would Jesus find the parable to resolve this impasse? C’mon…it’s Jesus. He has a parable and wisdom for everything. Meanwhile, the reason they could schedule this little tête-à-tête was the residents had made a bus trip to the local Casino. Not the best idea for a woman who has elopement issues. Especially since it was made clear that her wandering habits were one of their main problems. But, hey…What could happen?

Even a Hero Can be a Bully

Meanwhile, a figure from Sunstar’s past once again rears his head to cause trouble. This is a classic case of what happens when in high school, you bully the school’s resident genius. More often than not, they decide to use their intellect to try to teach you a lesson. Not to mention that they usually have a long memory and hold a grudge even longer. This was the case with Cranius, who Sunstar (Ken) used to pick on in High School. Numerous times Cranius tried to seek vengeance upon Sunstar without success. But all that meant was he would need to try again. Even if it meant taking out a large number of people as collateral damage. As long as it lured Sunstar to face him and resolve their differences once and for all. Finally, he would prove that he was superior. Despite Sunstar’s advantage of strength, speed…and hair.

Seeking to Shake Out their Differences

To draw Sunstar out, Cranius used his technical expertise to trigger a massive earthquake, which put everyone in danger. Including Sunstar’s pregnant wife as well as Jesus and his new found disciples. All because Ken was a mean spiteful kid in High School. With the quake doing massive damage, Sunstar did what most loving husbands would. He immediately focused on saving his wife and their unborn child. She however, reminded him upon his arrival, that if he didn’t focus on Cranius and the source of the problem, many more people would die. Not just her. That’s a wise woman, he should marry her. So reluctantly, he left her to deal with Cranius.

During this time, the bus that was ferrying the Shady Acres residents to the Casino stopped at a convenience store so that they could stretch their legs. After a brief respite, they loaded up the bus to continue their journey…all except Agnes. Considering that the Home KNEW of Agnes predilections, you would think they would have kept a closer tab on her. But they didn’t. However, as bad as that was, it might have proven to be Divine Intervention. Because as the quake started, the road the bus was on broke apart due to the violent shaking, leaving them in the dire situation of going off the road.

In the City, Jesus had met up with three of his newly found disciples. OK, three was all he had. But it was a start. He was explaining how quickly his followers in the past had forsaken him when push came to shove. The possibility of crucifixion can cause that. In fact, the one’s who remained most faithful to him, in the end were the women. The lesson he learned was that “you should always surround yourself with people you were willing to die for. Just don’t hold it against them when they don’t return the favor.”

That’s when the tremors started. As things started falling down around them, a large electric pole was falling toward Jesus. Without thinking or any concern for himself, his disciple Phil shoved Jesus out of the way. But not quick enough to avoid the pole himself. Talk about taking a lesson to heart. Jesus looked upon Phil with disbelief. What had he done?

Cranius vs. Sunstar Round II

At first, Sunstar tried to appeal to Cranius’ main issue. He apologized for his treatment of him in High School. Admitting he acted like a snot and that he was somewhat overwhelmed by his own powers. He confessed to being embarrassed by his treatment of Cranius. But this situation is bigger than either of them. If he could just see clear to…Cranius never let him finish. He attacked his arch-nemesis to prove his superiority.

Following up with the explanation of why he was going to come out on top and what it was that gave him his advantage. In other words, he did the stereotypical villains monologue. Giving Sunstar all the information he needed to defeat him. Some villains never learn. Even the really smart ones. But the damage was done. All that remained was the assessing the wreckage, cleaning up the destruction and mourning those who didn’t make it…and find Agnes.

The plight of Ken’s Mother really hits home for me. Both my Mother and my Mother-in-Law were strong willed and vibrant women. The one thing that they had in common was they both were adamant that they never wanted to be placed in a nursing home. My Mother, god bless her, always claimed she would rather die than to have that happen to her. My Mother-in-Law felt the same. Unfortunately, Alzheimer’s is a remorseless disease and cares little about their victims wants. In time, my sister who did miraculous work with Mom, had no alternative but to find a place who could care better for Mom than she could. By then Mom was lost to us and didn’t know what was going on. She received great care and passed away there.

My Mother-in-Law lives with us still, in the advanced stages of Alzheimer’s. My wife has done all she can to make her as comfortable as she can. But before then, she went to an Adult Day Care Center. At least until they informed us she was beyond their ability to care for. We were fortunate that we had the room to house her and able to get the assistance she needs. So I can relate to this part of the story. It is NEVER easy to make these kinds of decision when it comes to a loved one. And I know there were many times during the past years that my wife also has spoken to God and Jesus about her Mom. Powerful stuff. As was the story arc with Jesus and his disciple Phil. If anyone knows about making the ultimate sacrifice, it is Jesus.

This was easily one of the most emotionally charged books of the second season. However, Russell was still able to intertwine some comedic lines into the mix via that master of satire and one-liners, Jesus. I.E. Jesus talking about being deserted by his followers: “Of course, back then, once you got crucified your followers usually dropped you faster than a snake with herpes.” Great work here Mark Russell. When combined with the artwork of Richard Pace, and Leonard Kirk, Second Coming continues to plow new ground. While at the same time, making valid commentary on life as we know it. Waiting to see what’s next. Ahoy Comic’s Second Coming: Only Begotten Son, Issue 4 comes out September 1st.