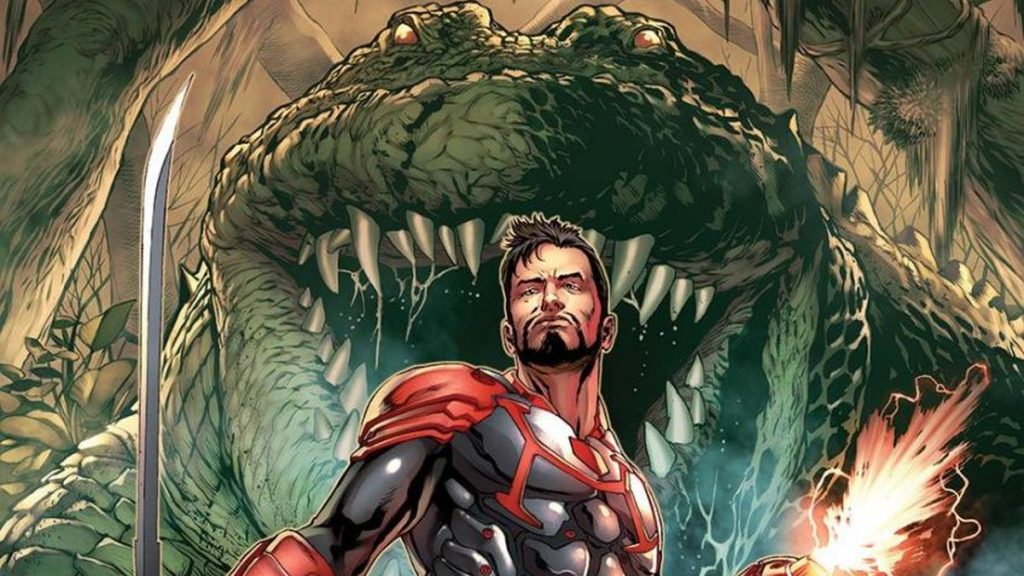 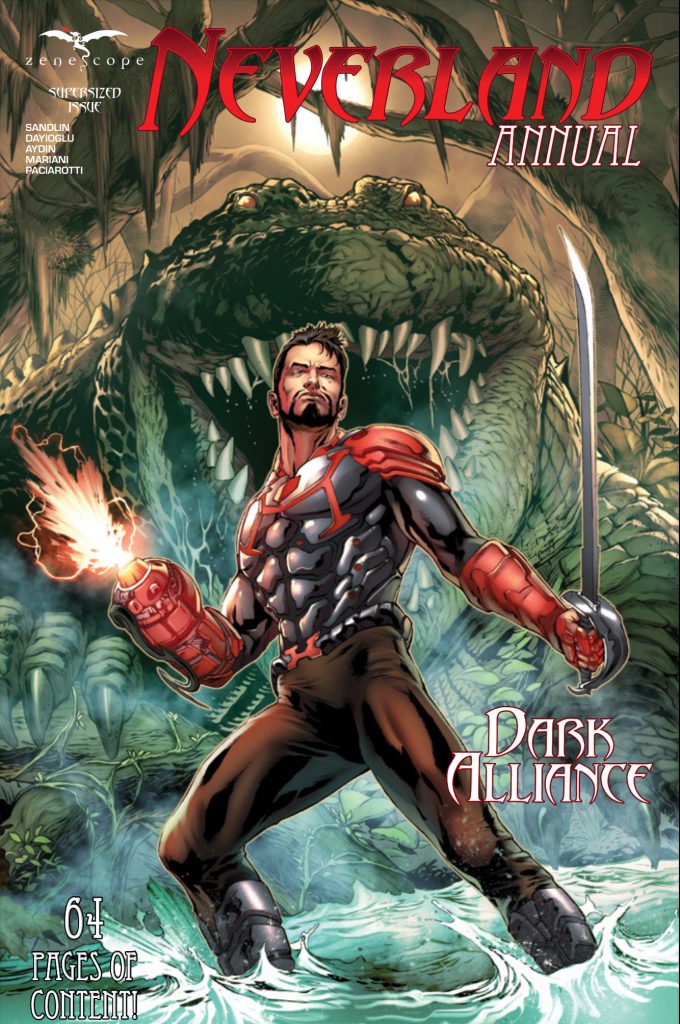 The Beginning of Neverland

Back in 2013, Zenoscope added another title to their popular series of Grimm Fairy Tales Presents. As they have in other books, they chose to select a cherished fable and twist into something new and exciting. Thus began the Neverland series. But this was not the land of the lost boys you remember. There were still “Lost Boys/Children,” but they only served to enable Pan, the ruler of Neverland to accomplish his goal: to never grow up.

In Pan’s new world, Neverland was not a place of happiness for children. It was a nightmare, and only one child who had the misfortune of entering Pan’s domain had ever escaped. His name was Nathan Cross, also known as Hook. He had always sworn that once he was free from Neverland, he would NEVER return. But never is a relative term and he had returned, several times. But surely, his last visit would be just that, his LAST. However, the fates are seldom so kind and to save his dying friend, Nathan must once again enter the world of Pan. The world of Neverland, Dark Alliance by Jay Sandlin, Cem Dayioglu, Hakan Aydin, and Alessio Mariana.

After his last visit, his friend and mentor, Dr. Harlow had fallen deathly ill. And while current medical knowledge seemed to be failing, Nathan was told by his friend Jessica that one of the fairies lost relics might be the source of a cure. It was called the Fairy Heart. Unfortunately, that not only meant returning to Neverland, it also meant facing the guardian of said relic, a massive Crocodile. That in itself would be bad enough, but the ugly sucker did one better. He swallowed the relic. Maybe Nathan would get a pair of boots out of this deal.

However, the battle was not going as easy as Nathan had hoped. That’s what happens when you are taking on an armored adversary. Well if Nathan couldn’t take him from the outside, he would take him from the inside. Which works out since the relic he needs ALSO happens to be on the inside. One thing was for certain, the crocodile would need no urging to swallow Nathan up. He would be just a Hot “Cross” Bun. (See what I did there?) A Bun that in the end, wouldn’t agree with his stomach, or his intestines. Ewwww.

The Croc Queen and her Warriors

So he had the heart, but his victory would be short lived. He was in the land of the Croc Queen after all. Because of this, his trespass would not be unnoticed. Before he could even think of returning with the heart, some of the Queen’s soldiers knocked him out and captured him. He awoke to find himself restrained and doused in water. It appears that after his long journey and his efforts to help Dr. Harlow, Nathan had been neglecting his bodily hygiene. Not that it should have been a surprise to him. Jessica told him the same thing. He was a dirty stinker. But Nathan didn’t have time for a leisurely bath, Dr. Harlow was waiting for him.

It was then that the Croc Queen appeared. She recognized the fairy heart and surmised that its discovery was a good omen. Ever since she had lost her King, there had been very little healing in her land. Nathan cared not about any of this. His only concern was getting the heart back in time to heal Dr. Harlow. His brisk dismissal of the Croc Queen ( and the fact that he dared to touch her in a aggressive manner) angered her warriors. Apparently, Croc Warriors don’t play that!

But before another altercation could arise, Tinker Bell and Tiger Lily appeared. They asked the Croc Warriors to stand down. Nathan was a friend, although at the moment, you could not tell it. When questioned why Belle and Lily were with the Croc people, they explained that they had joined with the Croc Queen and her people to form the Neverland Alliance. They could use his assistance in their battle against Pan, who had returned. But Nathan had been down this path before with the Realm Knights. They too had delusions of defending world’s. Not this time, not for him.

The Losses of Obsession

Seeing that Nathan was seemingly not the same man they knew, they asked him what had happened when he last left Neverland. What had transpired since He, Wendy and Dr. Harlow had crossed over with the intention of saving him? He told them that Medical Science in his world could not decipher what was happening to Harlow. And because of Nathan’s obsession with finding a way to cure, he lost Wendy as well as Michael and John. He was alone, but his task remained the same.

So Jessica told him about the heart and here he is. However, Belle informs Nathan that the heart will not cure his friend. It does have healing powers, but only for Fairies. And since she helped Pan wipe out all of her people but herself, she believes the heart would not even work for her. She is uncountably unworthy to touch it. However, while finding a cure for Dr. Harlow is important, the return of Pan has to take precedence.

It seems that Pan has set his “Lost Boys” loose all over Neverland. Mindless creatures who seek nothing but food and destruction. More Zombies than Boys, they are overwhelming villages by sheer numbers. Meanwhile, Pan stays safely out of the conflict, biding his time. Upon hearing this, Nathan concedes to joining their Alliance. While he may not like how he was “recruited,” he will never miss a chance to once again defeat Pan. Besides, since it was Pan who afflicted Doc in the first place, he might have a cure that would save him. And Nathan would have no reluctance to beat it out of him. The problem was, none of them knew Pan was held up.

They had not seen Pan since Wendy had slain his “concubine” as Belle referred to her as (See Neverland 2020 Annual). The Alliance had searched out all of Pan’s normal hiding places. While they had encountered the Lost Boys, Pan was nowhere to be found. As they discussed these events, Hook suddenly knew where Pan was likely hiding. He expressed the need for them to get moving as expeditiously as possible. However, his new Alliance partners suggested that Nathan first get some rest, and perhaps a bath. Again with the Bath. These Alliance folk must be used to only having squeaky clean and fresh smelling compatriots.

Reluctantly, Nathan conceded their point and agreed to get some rest. At least that was what he WANTED them to think. It was apparent that the Alliance did not see the necessity for alacrity here. But Nathan knew that he needed to go before Pan slipped away. A bath would have to wait…again! With that in mind, no sooner had he been left in his room, he escaped out the window. Going off on his own in search of Pan. Hopefully they didn’t smell him leave.

As he journeyed, he thought of why he hadn’t thought of the place he was going right at first. The one place that meant the most to him. The spot that Pan had killed his little brother. However, it was not Pan that he found there, but Wendy. But not quite the Wendy he knew. This Wendy was filled with power, and rage. Rage against him. However, Nathan could not bring himself to battle against Wendy, despite her readiness to kill him. Because of his reluctance, she snatched the Fairy Heart from around his neck and left him for the Crocodiles to finish. But just when it looked like Wendy would get her wish, someone else stepped in and rescued Nathan. Hauling him away from the pending Crocs.

As many Questions as Answers

At this point we have reached the stage where you, my friends, must read the rest of the book to see what transpired. Rest assured there are more twists, and turns and no doubt alliances will be tested. What was up with Wendy? Where was Pan held up? Could the Neverland Alliance defeat whatever evil purposes afflicts their land? Will Nathan return in time to save Dr. Harlow? That’s a whole lot of questions to answer. So you better get to it.

As always, Zenoscope can turn a classic tale and put it through Kamasutra like twists. The Neverland series is just one more example of this. Fortunately for them, they have enlisted a writer for this Annual who has proven a talent for such kind of developments. Whether he is writing and developing his own characters or working with established ones, Sandlin has been up to the task. The Neverland Alliance is no different. Given an opportunity to explore circumstances that allow for thinking outside the box, Sandlin embraces these story elements as well as any writer out there. It’s no wonder that his star is on the rise.

Another thing that Zenoscope never shortchanges on is the artwork. I have never once seen a Zenoscope title that didn’t impress with their energetic panels, finely detailed pencil and ink work, and colors that leap from the page. Neverland Dark Alliance holds true to that form. Artists Cem Dayioglu, Hakan Aydin and colorist Alessio Mariana masterfully details Sandlin’s tale and the myriad of characters involved. Whether it be the Zombie like Lost Boys, the bad ass women of Neverland or the intense battle scenes. Whether they be against each other or a massive Crocodile. Its one of the elements that make a Zenoscope book always worth the read.

You can find Zenoscope’s Neverland: Dark Alliance where great comic books are sold. It is another welcome addition to the Neverland saga.