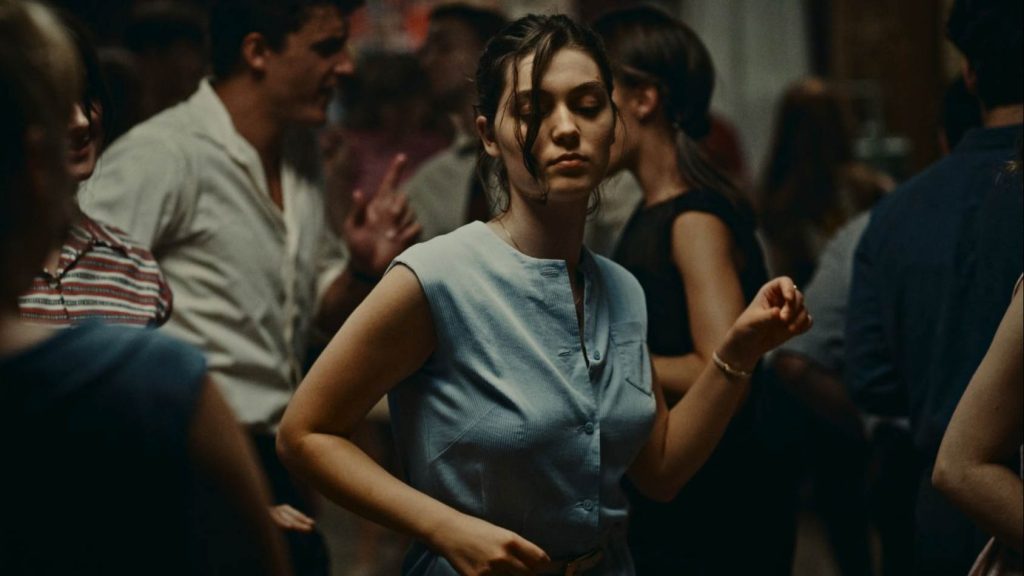 Anamaria Vartolomei appears in Happening by Audrey Diwan, an official selection of the Spotlight section at the 2022 Sundance Film Festival. Courtesy of Sundance Institute | photo by IFC Films.

Adapted from Annie Ernaux’s 2001 memoir of the same name, Happening (2022) relays Ernaux’s experiences as a 23-year-old in 1963 France. Abortion is still illegal, and Annie’s (Anamaria Vartolomei) single sexual encounter has resulted in a pregnancy. While in the throes of studying for France’s cutthroat university exams, Annie desperately searches for a way to terminate her pregnancy at a time when even talking about abortion could land you in prison. Surrounded by friends focused on their exams, cruel classmates set out to shame and ridicule Annie even before knowing of her pregnancy, and the ticking clock of the abortion window, Annie seeks out every option she can conceive of. It is a breathless and harrowing hour and forty minutes of movie that offers a resolute and unflinching portrait of the agony women face when fundamental reproductive rights are withheld.

Before delving into the exquisite craft of Happening, it strikes me that the experience of watching a film motivated by abortion in the United States right now is heightened by the ceaseless attacks on  Roe v. Wade and reproductive rights in general. Happening is a French film about a French woman’s experience nearly 60 years ago, but its stakes could just as easily be translated to what women in Arkansas and Texas face as we speak. With bounties doled out for those who report information pertaining to prospective or completed abortions, Happening is far from an experience that can be comfortably contained by the past. Pair it with Eliza Hittman’s incredible Never Rarely Sometimes Always (2020) and you get a double feature that weds past and present through the disturbing reality that stems from restricting and criminalizing abortion. Just as Hittman did before, Happening takes an issue that is so often treated simply as a belief to be debated and firmly plants in the arena of the personal and individual.

Director Audrey Diwan, here helming her second feature, delivers a filmmaking clinic. Working from a script she co-adapted with Marcia Romano, Diwan approaches Happening less like a drama than a bare-knuckled thriller. It takes a handful of scenes before Happening clarifies the abortion focus when Annie notes that she is three weeks late, writing it in her journal. This is accompanied by a title card: “3 weeks.” That title card returns as various stages, noting how far along she is, and marking the time as other films might treat a bomb’s timer or madman’s deadline. No, Happening does not contain car chases or shootouts but is there truly anything more sickeningly riveting than someone chasing down control of their own body? Every conversation and interaction Annie has is loaded with the angle that she cannot open up to the wrong person or they could turn her in. In this sense, Annie is hardly removed from a spy ferociously guarding their secret in order to survive.

Visually, Diwan conveys much of this with an unsparing camera, favoring handheld long takes that situate the audience view as especially voyeuristic. All film is of course an exercise in voyeurism, but Diwan makes us privy to Annie’s most private moments, framing them without an ounce of exploitation. Her first doctor’s appointment, when the pregnancy is confirmed. When she enters the communal shower at her school anxious about the other girl’s figuring out her secret. Late at night when she decides to attempt a solo abortion with a hot metal rod. Diwan’s camera is unsparing of us watching while fiercely protecting Annie. The camera never leers at her nakedness or suggests a salaciousness to her actions the way so many cruelly-directed films have. Diwan sets the camera and pulls in on Annie, often settling for an unflinching close-up or medium shot. I was constantly holding my breath, Diwan’s compositional acumen translating Annie’s anguish into astounding tautness.

In Vartolomei, Diwan was also blessed with an extraordinary collaborator. There is hardly a shot in all of Happening that does not center on Vartolomei’s performance as Annie. Together, the women sculpt Annie into a towering vision of wounded courage, forging ahead no matter the agony of her increasing isolation and frantic searching. Diwan favors a roving focus that regularly blurs out the characters Annie interacts with, heightening the sense that while she is there with people, she is alone. It’s a bold choice, but it works because Vartolomei is singularly committed to her role. Aided by a brilliant costume choice in the form of a blue blouse, Vartolomei’s blue eyes blaze as she studies, watches, and chases down leads. Vartolomei captures a physicality that tips at Annie’s sudden discomfort in her own body, that vessel that holds within it the potential for her undoing. Most interactions with people are reserved, but when she turns it on the festering fury lashes out. There is one scene, one of the last in the film, that I will not speak specifically about for fear of dampening the experience, but it is one of those scenes where a performance sears onto your mind. I will not soon forget what Vartolomei manages here.

Happening is the rarified marriage of essential subject with astonishing craft. Too often, movies about important or timely subjects end up as mushy mounds of buzz words, empty posturing, and poor filmmaking. Happening embodies the best of what you can hope for when visiting the cinema to seek out art to move, challenge, and enlighten you, all while doing so with arresting beauty.

Happening played in the Spotlight section of Sundance Film Festival 2022.