“Heathers the Musical” Review – A Fantastic Recording Of An Okay Musical 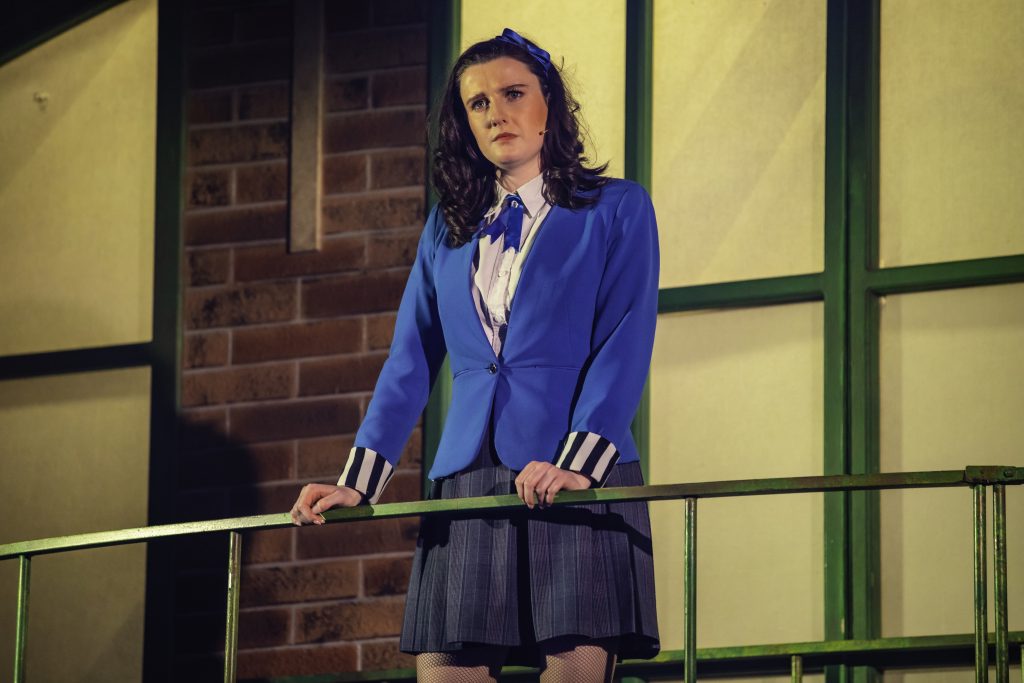 Over the past few years, there’s been an uptick in professional recordings of stage plays and musicals (or proshots, as they’re often called). And for an inherently inaccessible industry like live theatre, it’s an innovation that’s long overdue. The latest of these proshots, a recording of the most recent West End revival of Heathers the Musical, comes by way of the Roku Channel. And it’s a perfect example of exactly how much fun a proshot can be. As a musical, Heathers isn’t necessarily anything special. But the stellar performances and catchy music are fun enough to overcome any of the script’s weaknesses. And on a technical level, it perfectly captures the energy of a live theatrical production.

A Movie That Doesn’t Benefit Much from Becoming a Musical

Adapted from the Daniel Waters and Michael Lehmann film of the same name, Heathers the Musical follows high school outcast Veronica Sawyer (Ailsa Davidson), who makes a deal with the devil of sorts – the school’s popular mean girls, the Heathers (Maddison Firth, Vivian Panka, Teleri Hughes). At first, Veronica gets a taste of exactly what she’s always thought she wanted – popularity, adoration, and safety from the cruelty of the other students. But when a new student, J.D. (Simon Gordon), arrives, Veronica finds herself drawn in by his mysterious, bad-boy ways. Little does she know just how deadly the price of popularity and adoration might become…

Full disclosure, I’ve never seen the original Heathers film, so I can’t speak as to how faithful an adaptation the musical is or isn’t. That being said, I can’t imagine this musical is really the ideal way to experience this story. The problem isn’t the score, which is a largely enjoyable affair. Sure, a lot of the songs sound very similar – and they’re not at all of the era the musical’s set. But they’re catchy as hell and keep the energy high. The issue is the script. Or, to be more specific, the way the script tries to weave back and forth between dialogue and song. It’s immediately obvious that the story of Heathers doesn’t benefit much from being a musical. Heathers the Musical is buried underneath so many layers of camp and cynicism that it’s hard to find any genuinely emotional moments underneath the artifice.

Too Much Artifice, Not Enough Emotion

For the first act, this isn’t much of a problem. It all plays out in a very Little Shop of Horrors or The Toxic Avenger kind of way, where you can feel a sense of darkness bubbling underneath the surface, but that darkness doesn’t fully emerge until the act one finale. And so that sense of artificiality works very well. The problem emerges in act two. Act two is where all the emotions need to be at their highest as all of the arcs come to their climactic conclusions. And Heathers just doesn’t do that. There are multiple instances where a song undercuts what should be an emotionally tense moment, thereby robbing that moment of any real heft. To be clear, it’s not that the songs in act two are any less good than those in act one. It’s just that the musical doesn’t utilize them as well.

It’s almost like the musical is afraid to be too genuine or to go too dark. And so it hides underneath these layers of camp, trying to distance itself from the heart of its story. Parts of act two work very well, (“Kindergarten Boyfriend” is one of the few songs that made me genuinely emotional.) But for the most part, Heathers the Musical just feels a bit bloated. It’s a lot of fun, but it’s a very inefficient, surprisingly ineffective way of telling this story. I can’t say what, exactly, should be cut, but it feels like there’s room for cuts. Or, if nothing else, for some of the songs to be turned into dialogue. So, if you’re not a fan of the musical (or not open to the campy excesses on display), then I can’t imagine this recording is gonna change your mind.

All of that said, this recording is still an impressive recording of a very enjoyable production. Proshots have always struggled with capturing the energy of a piece of live theater. Anyone who’s ever seen a live musical knows there’s this electricity that courses around the room, connecting the audience with the actors onstage. It’s one of those things that just can’t quite be replicated, even on those live TV musicals that NBC and Fox have been doing over the last decade. But the Heathers proshot comes really close. The recording treats the live audience as an important part of the Heathers experience, frequently letting viewers see exactly how they’re reacting to any given moment. Their cheers echo around the sound mix, and their excitement is palpable.

You can see how the actors feed off of the energy in the room – both intentionally (through some very cleverly written and staged moments of audience interaction) and subconsciously. And that dynamic makes for a truly engaging viewing experience at home. On a technical level, the Heathers proshot strikes a nice balance with its camerawork. Mostly, the camerawork is very utilitarian, rarely drawing attention to itself and just seeking to capture what’s happening on the stage in the most visually coherent and interesting ways possible. And for me, that’s a good quality because it allows the musical to speak for itself. It’s easier to appreciate how great the actors’ performances are when you can see them without distraction. And every member of the cast is pitch perfect – though Ailsa Davidson steals every scene she’s in.

At the end of the day, Heathers the Musical is an excellent recording of an okay musical. Narratively, the story doesn’t benefit at all from the music. But the music is so good that it’s very easy to just turn your brain off and let yourself get swept away by the campy delights of the spectacle. All of the actors seem to be having the times of their lives onstage, and it’s a true joy to watch them revel in the audience’s adoration. On a technical level, Heathers the Musical delivers about as perfect a proshot as you could realistically expect. It does a great job capturing the energy of the performance, and the camerawork is artistic without being distracting.

If you’re already a fan of the Heathers musical, then you’re gonna adore this recording. But if you’re on the fence, I’d still say it’s worth a watch if you’re open to losing yourself in campy delights.