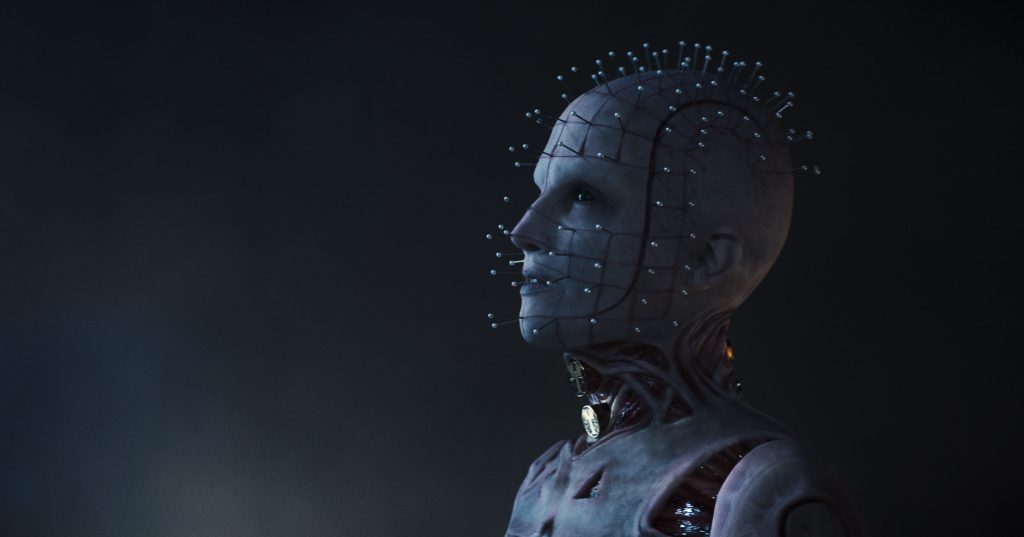 Plot Summary: A take on Clive Barker’s 1987 horror classic where a young woman struggling with addiction comes into possession of an ancient puzzle box, unaware that its purpose is to summon the Cenobites.

The original Hellraiser from 1987 and its sequel, Hellbound: Hellraiser II released in 1988, have always held a very special place for me. As a budding horror fan, the movies made a crater-like impact on me. The stylish overtones, haunting imagery and subversive subject matter was a breath of fresh air from the more conventional films. But, on a deeper level, it’s something that attracted me as a fan discovering my own sexuality. Hellraiser and other films and books by Clive Barker hold up a mirror to the outsiders, the others. Therefore, while the movies are never outright Queer-coded, they certainly can be read as such. When speaking to Hellbound scribe Peter Atkins recently, we talked at length about this aspect. Yet, there has never been an openly Queer character in a Hellraiser film, until now. This is one of the many new and fantastic elements in David Bruckner’s reboot of Baker’s most famous literary work.

As you might imagine, like a lot of fans, I was nervous. Let’s be honest, the franchise hasn’t been good in a long time. I am happy to report that this is a true return to form for the Hellraiser series. Bruckner clearly has a lot of love and respect for not only Clive Barker’s original novella, The Hellbound Heart (published in 1986), but for the film adaptation and its sequel, helmed by Tony Randel and written by Peter Atkins. You can see this in the attention to detail that is paid. Not only is Pinhead known as The Priest, which is more book accurate, but tonally it feels much more in the spirit of The Hellbound Heart. Scribes Ben Collins and Luke Piotrowski (the duo behind The Night House) cleverly take the best aspects of the Hellraiser established lore, such as Leviathan and the Cenobites, yet smartly build upon it in fresh and exciting ways.

Without going into spoilers, I will just say that the puzzle box, an iconic staple of the series, has been given a bigger part to play in the grand scheme of the plot. Similar to the the Evil Dead remake, our main character Riley (Odessa A‘zion) having a substance addiction is used here in a thoughtful way. Riley is both literally and metaphorically destroying her relationships, putting her in a sort of hell, long before the box shows up. Not to mention, when spooky stuff starts going down, nobody believes her, because they think she is just high. The Cenobites are by far the most terrifying they have ever been, and I cannot say enough good things about their design.

Visually, Hellraiser is without a doubt the best looking in terms of providing atmosphere that is a fusion of scary and a beauty wrapped in chains, blood and barbed wire. Just what you would expect from a Hellraiser film. Seriously, the use of shot composition, color scheme and lighting really go a long way into setting up the correct mood.

Now, I will say there are some aspects that I think could have used another pass. The rules of the puzzle box are pretty vague, and things don’t feel established in service of keeping the plot moving. Also, as much as I overall enjoyed the film, the third act does feel clunky and in need of some streamlining. Yes, while I am happy that we finally get a Queer couple, this aspect is handled very safely. Speaking of, the sex and violence are toned back quite a lot. During the Hellraiser press conference, David Bruckner did address this and to sum up, he stated that this was a very conscious creative choice. Honestly, I am baffled by this. Afterall, Clive Baker’s main inspiration for The Hellbound Heart was going to hardcore S&M clubs. So, the fact that that very element is smoothed down makes no sense.

Hellraiser is a hellish scary journey, and one for which fans have been clamoring.

Hellraiser will be available to stream exclusively on Hulu beginning October 7, 2022.

Hellraiser is a hellish scary journey, and one for which fans have been clamoring.