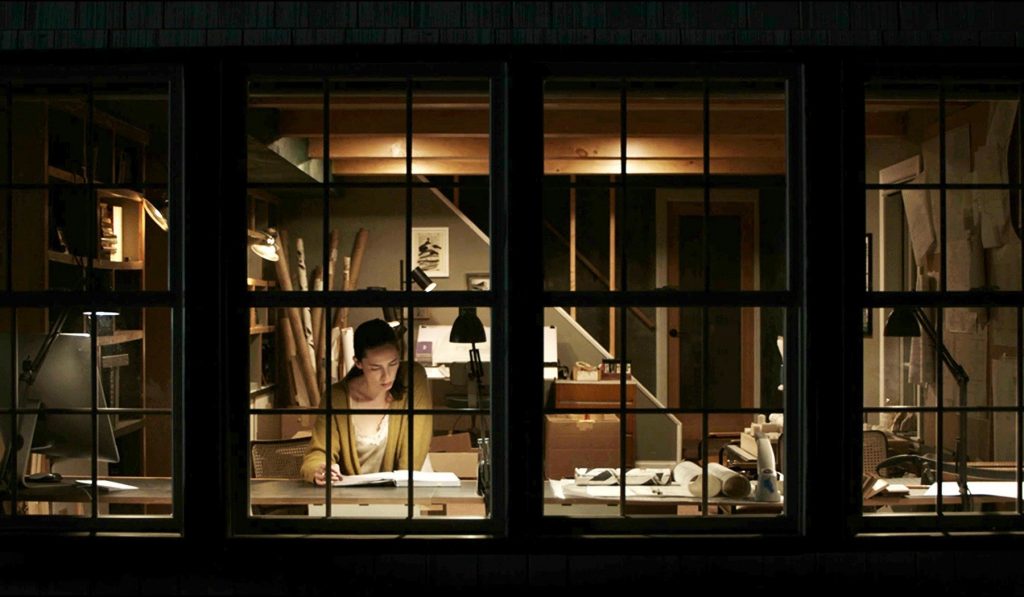 Reeling from the unexpected death of her husband, Beth (Rebecca Hall) is left alone in the lakeside home he built for her. She tries as best she can to keep it together – but then nightmares come. Disturbing visions of a presence in the house calling to her, beckoning her with a ghostly allure. Against the advice of her friends, she begins digging into her husband’s belongings, yearning for answers. What she finds are secrets both strange and disturbing – a mystery she’s determined to unravel.

Losing a loved one is one of the worst things a person can go through. It leaves you with this unfillable void in your heart, an aching that merely becomes duller over time, but never goes away for good. Eventually, you put the pieces of your life back together. But for a while, you’re pretty broken. It’s often an effective premise for dramas, but it proves to be an even more effective premise for ghost stories. David Bruckner’s The Night House is a loving throwback to traditional haunted house films that doubles as an emotional, in-depth exploration of trauma. Led by a knock-out performance from Rebecca Hall, a masterfully executed plot, and enough thrills to chill you to the bone, it’s well worth a watch.

At first, the film plays out like a traditional ghost story. There are the requisite spooky noises, things seen out of the corner of one’s eye, voices calling from the beyond, and plenty of disturbing nightmares. It would be easy for Beth (Rebecca Hall) to chalk it up to the trauma of losing her husband. After all, he did take his own life shortly before the film began. Would it really be that unusual for her to feel like she was still sensing his presence? But things gradually get worse as the film progresses. The hauntings get more intense and the dreams grow more realistic and disturbing, leaving Beth uncertain of what’s real and what’s not.

As a traditional ghost story, it hits all the beats you’d want it to. And there’s even this underlying mystery involving Owen (Evan Jonigkeit), Beth’s husband, some strange pictures on his phone of women who look like Beth, and an unsettling “reverse floorplan” of the house they shared. This mystery helps tie together all of the disparate elements of the haunting by introducing a rather compelling bit of mythology that I won’t spoil here. But needless to say, it works very well. It’s skin-crawlingly creepy, and the slow build-up to the reveal is masterfully executed, as more and more layers of tension are added on top of each other. The ultimate climax of this mystery is just as creepy, though collapses a little under any major thought. But The Night House is quite an enjoyably tense and creepy ghost story.

…With an Emotional Twist

However, that’s not what makes this movie as good as it is. Sure, it seems like any old ghost story on the surface. But dive just a little deeper, and you’ll find a genuinely moving examination of one woman’s grief and trauma. From the moment the movie begins, Beth is visibly distressed. Losing a spouse is hard enough, but losing them like this can destroy your world. Rebuilding your life after such a loss is unspeakably difficult, but where do you even begin when you’re not sure why you’ve suffered the loss you did? That’s where Beth finds herself at the beginning of The Night House. The only explanation for Owen’s death she’s got is a cryptic suicide note that sends her down this rabbit hole of trying to make sense of all of this new information she’s learning about him.

In this regard, Beth ends up being quite the unreliable narrator. The deeper she digs into Owen’s past, the more unhinged from reality she begins to appear. Can we really trust all that we’re seeing when it’s her point of view we’re seeing it through? It’s easy to read the film as a metaphor for Beth’s journey through the stages of grief. The fact that the more paranormal aspects of the film directly align with Beth’s rapidly declining mental health only strengthens this idea. But it’s also what makes the film so compelling. Underneath all of the (admittedly enjoyable) layers of spooky horror, is this deeply personal tale about a woman just trying to cope with unspeakable loss. And the harder she tries to make sense of it, the further away from catharsis she gets. Who can’t relate to such an idea?

This whole emotional core hinges on Rebecca Hall’s performance. Hall is in nearly every scene in the film, and she carries the film in every sense of the word. I think the best word I could use to describe Hall’s performance is “realistic”. Everything about her portrayal of Beth feels authentic, from the way that she masks her pain with off-kilter humor to her palpable desperation as she tries to make sense of all that’s happening to her. You really feel for her, for what she’s going through. And that’s partially because of the writing, and partially because of Hall’s performance.

There’s just something so viscerally authentic to what she does throughout the film. The way she can jump from one extreme to the next in the space of a few seconds. That’s exactly what grief can feel like, and Hall seems unafraid to dig into that. Ultimately, Hall’s performance helps ground the film. Considering how Beth is constantly surrounded by these larger-than-life paranormal events, it’s good for the audience to have something closer-to-home to relate to. And without such a masterful performance, it could’ve been easy for the movie to collapse underneath everything it’s trying to do.

An Atmosphere to Die For

No ghost story is complete without a creepy atmosphere, and The Night House simply nails it. While squarely set in the present day, you’re often reminded of the more gothic ghost stories of yesteryear. The house may be modern, but everything else feels decidedly old school. The movie luxuriates in playing around with darkness and color. Things during the day look and feel fairly normal, but when night comes and the hauntings resume, there’s almost this oppressive darkness that takes over the screen. As though it’s mirroring the emotional darkness Beth is trying to fight off. And it’s wildly effective. It just creeps in and overwhelms your senses, and it’s exactly what you want in a ghost story.

There are very few moments that come across as “jump scares;” rather, the film just slowly builds up the tension and allows that tension to be the main driving force of the terror. The paranormal events start fairly modestly, before building toward an explosive, mind-bending climax. And speaking of that climax, its visual effects are genuinely breathtaking – even more so when you know that they’ve primarily been achieved in-camera as opposed to through extensive post-production. There’s nary an apparition to be seen, but you don’t miss it at all. Between the music, the sound effects, and the very intentional cinematography, you’d easily believe some kind of entity might be haunting Beth’s house. Visually, everything about The Night House just oozes that creep factor. And it’s absolutely wonderful.

The Night House affected me in the same way all of the best horror movies do. On the surface, it gave me all of the thrills, chills, and scares I was looking for. It fully embraced the idea of being a kind of modern-day version of a gothic ghost story, luxuriating in its shadowy visuals and digging deep into some truly creative and frightening ideas. But it also gave me that emotional connection I crave. It’s impossible not to get involved with Beth’s journey. To feel your heart break alongside hers, to worry about her safety, to hope she pulls through all of this. Hall’s performance brilliantly takes you on this journey, inviting you into Beth’s mind and ensuring you feel what she’s feeling. It’s a funny, thrilling, heartbreaking performance that feels all too human. A perfect way of grounding a film like this.

This exploration of the grief that comes with losing a loved one is what’s stuck with me in the days since I watched the film. For all of the delightful horror moments, that emotional core is what makes me love this movie. If you’re a fan of ghost stories, you won’t be disappointed. But if you like your horror to come with a side of emotional exploration through metaphor, then you’ll be even happier. The Night House is 100% worth a watch.

The Night House is now playing in theaters. 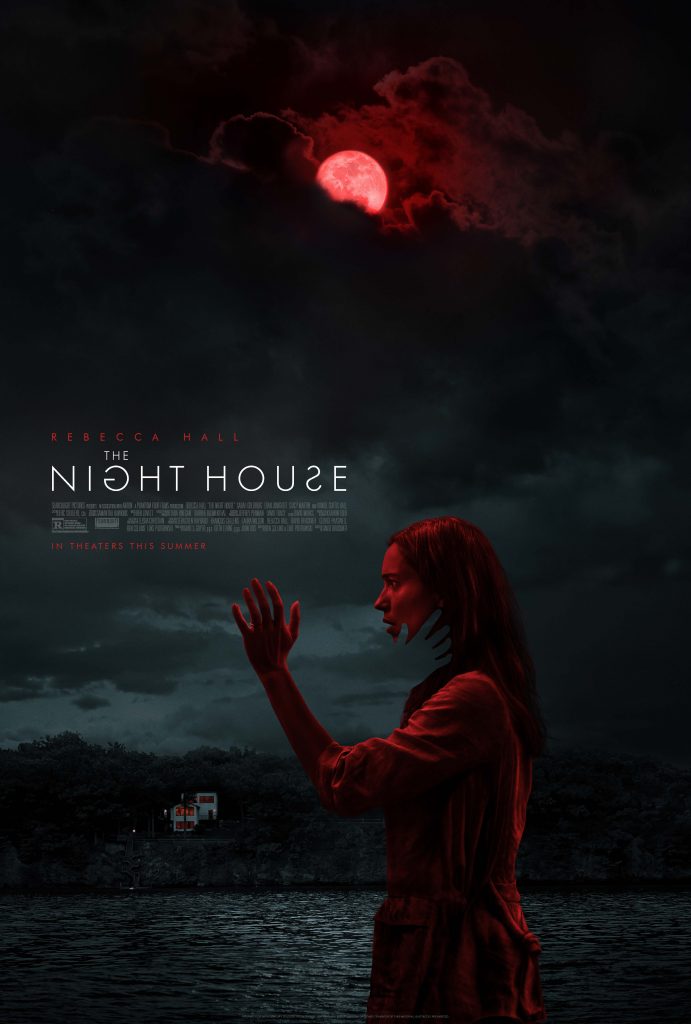