‘House Of The Dragon’ Episode 5 Recap – Do You Like Parties With Mayhem And Murder? 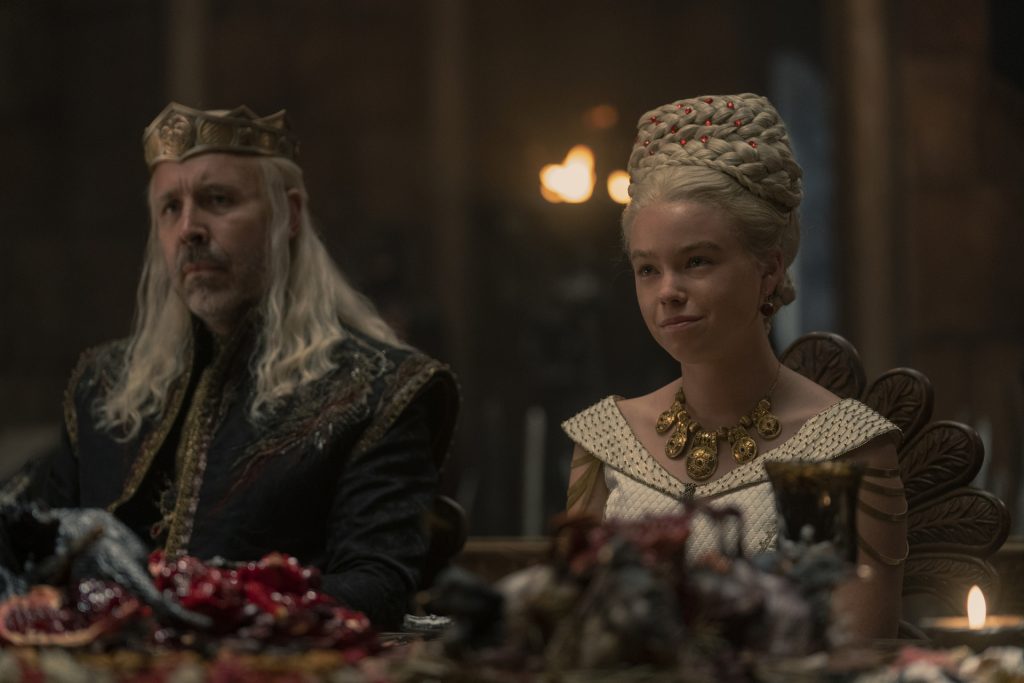 Welcome back my friends to another House of The Dragon recap, and today is a good one. We’re halfway through the season and things are heating up – no pun intended. Episode five starts off rather interestingly by showing us a character we’ve never seen before but have heard a few times being mentioned in past episodes. I’m talking about Lady Rhea, who just so happens to be Daemon’s wife. We see her going out to hunt after briefly speaking with her cousin and then riding off. Shortly after, she runs into the prince of mischief himself, Daemon.

After an exchange of words, questions, and insults, mostly from her, Daemon decides to take matters into his own hands. Lady Rhea quickly catches on as to why he decided to show up all of a sudden and makes a move for her bow, resulting in her being thrown off of horseback with her horse landing on top crushing her spine – you can even hear it happening! It would seem as if being in the middle of nowhere and left to starve or freeze to death from the cold and paralyzed would be enough for Daemon. It would’ve been enough for me, but the good Lady Rhea had to throw some extra shade toward Daemon, ultimately sealing her own fate. Don’t worry folks, the horse is still alive.

In other news, King Viserys and his people (Princess Rhaenyra included) are traveling by boat across the seas to visit Lord Corlys and his wife Princess Rhaenys Targaryen. This time, it’s to make amends and propose a marriage between Rhaenyra and Corlys’ son Laenor Velaryon. Here’s where things start to get messy – Rhaenyra and her cousin Laenor are getting married but neither of them wants to go through with this. They’re not in love with each other, but they make an agreement to keep this “marriage” a sham. For them, this is strictly business for the betterment of the Kingdom and the realm that they’re next in line to rule, and as part of this agreement, they’re both free to love whomever they choose – but in secret. Young Laenor informs his lover, Joffrey, of the plan with him and Rhaenyra and he’s all in.

Remember when Viserys said everyone in the small court has their own ambitions for the crown? He was right, Corlys and Rhaenys made that explicitly clear to Viserys when hashing out the terms of this marriage. Corlys thought he was clever enough to make his grandchild, who would be the heir to the throne after Rhaenyra, keep the name Velaryon. Viserys decides to flex his kingly muscle in their own house and agrees that their grandchild can keep the Velaryon name, but the heir to the throne will continue to be Targaryen. After second-guessing his actions, Corlys happily agrees and the deal is done. I guess Viserys isn’t such a fool after all!

Meanwhile, in the garden with the weirwood tree in King’s Landing, Queen Alicent runs into Larys Strong, who is Lord Lyonel Strong’s son, discussing the scandalous actions of Rhaenyra from episode four. He brings up the dismissal of Lord Hightower, the Queen’s father, and states it’s an injustice. This is triggering for Alicent because no one knows about this outside of the King, Lord Hightower, Rhaenyra, and herself, so what exactly is Larys getting at? Nothing. The entire conversation was a bait that she fell for from the beginning. Larys is looking to maneuver his way into good standing with the Queen so he mentions the scandal with Rhaenyra – but in a way the both of them would know without stating it plainly. He informs her that the Grand Maester brought some “tea” to her room, and we all know what that’s for. Alicent’s once again suspicious about what really happened that night with Rhaenyra, and is even questioning their friendship

After avoiding such a massive scandal, Rhaenyra is now confronted by Ser Criston Cole on their way back to King’s Landing about their future. After sullying his own reputation and honor as a knight (no one even knows about this…yet), he offers Rhaenyra a life of freedom and joy. To run away with him and leave everything behind and go somewhere where no one knows who they are. The promises and luxury of being royalty are just too good for Rhaenyra to give up for anyone, and it shows. She refuses the proposal and instead offers a different one. She offers Criston the opportunity to not only continue being her guardian knight but her secret lover. If you guessed goody-two-shoes Ser Criston would deny that proposal and be in his feelings about it, then you guessed correctly. At this point I’m not sure if feelings and royalty, in any regard or fashion, even mix well; things just never work out.

Alicent requests to speak with Ser Criston just as soon as they return from their voyage. In her questioning, she literally beats around the bush making the conversation with her and Criston immensely awkward for both of them, thus leading to Ser Criston telling the truth. The funny thing is they were both talking about two different things at the same time, what a twist of fate this is! Ser Criston thought she was getting ready to banish or kill him for breaking his oath of chastity as a knight, and Alicent was talking about Rhaenyra sleeping with her uncle; his confession confirming that Rhaenyra actually did sleep with someone that night she was seen around town. That nasty tidbit is now quickly forgotten, with a devastated Alicent now learning she slept with Ser Criston, her secret crush.

As King, how do you celebrate the engagement of your daughter to her cousin whom she grew up with? You throw the party of a lifetime, that’s how! Everyone that is someone important is invited to partake in the festivities for the night, which means all of the royal houses are there. As is tradition, the representatives of the households come up and say congratulations to the King and Rhaenyra. Jason Lannister is one of them, which neither the King nor Rhaenyra particularly cares for, which provides a bit of much needed comedy. Are you ready for the drama to finally kick in? Good, because Daemon has made his appearance which no one is pleased with, but to quickly get over the deafening silence in the room, the King welcomes him with a seat at the table and proceeds to move on.

Now that the small council and everyone of importance are present and seated, Viserys commences his speech, and Queen Alicent makes her appearance in a stunning emerald green dress. Her wearing the green dress signifies her anger and rage will be enacted in some way, somehow. Viserys realizes this and Alicent ensures Rhaenyra knows by calling her “stepdaughter” instead of her name and how casually she addresses her. After some time the party continues and everyone starts to dance, Laenor takes the time to speak with his secret lover Joffrey, who has pieced together who Rhaenyra’s secret lover is – with all gazes pointing toward the creepy look Ser Criston is giving Rhaenyra. While they’re watching Ser Criston, Corlys and Rhaenys are watching their son, Viserys and Lord Lyonel are witnessing the conversation with Daemon and Lady Rhea’s cousin and piecing together the true nature of her death. Joffrey, in his cockiness, thinks it’s a good idea to poke the bear and inform Ser Criston their knowledge of his and Rhaenyra’s “relationship”.

Do you love a good ol’ medieval brawl? I do – and every minute of what transpires had me holding my face in pure shock and disbelief. Who would’ve thought Ser Criston would’ve been the one to be the center of it all? This man has lost his honorable mind and broke in two, figuratively speaking. What’s ironic is that he literally broke the good Joffrey’s face in two and made a bloody spectacle of it all. I guess that narrows down how many people know of his dirty little secret. The party is obviously canceled and everyone’s sent home, following the immediate marriage of Rhaenyra and Laenor – all because they decided to run their mouths.

I would have never guessed that so many things can go this horribly for one royal family. The level of drama that takes place leaves me astounded every week and has always been a talking point amongst friends and family. To dissect these characters and their actions to figure out how can one be so foolish, or even on the rare occasions where someone has a stroke of either genius or dumb luck, is simply thrilling. Knowing that we’re now past the halfway point in the season, things are going to be way more exciting this time around. Based on the previews of the next episode, we’re in for another time skip that has seriously aged all of the key players. We’ll be seeing King Viserys as an even older man, with Emma D’arcy and Olivia Cooke finally stepping into their respective roles as the adult versions of Princess Rhaenyra and Queen Alicent. There’s so much more to learn about this story that I’m dying with anticipation of what’s to come in the next episode!