Interview With ‘Dressing Up The Stars’ Author Jeanne Walker Harvey 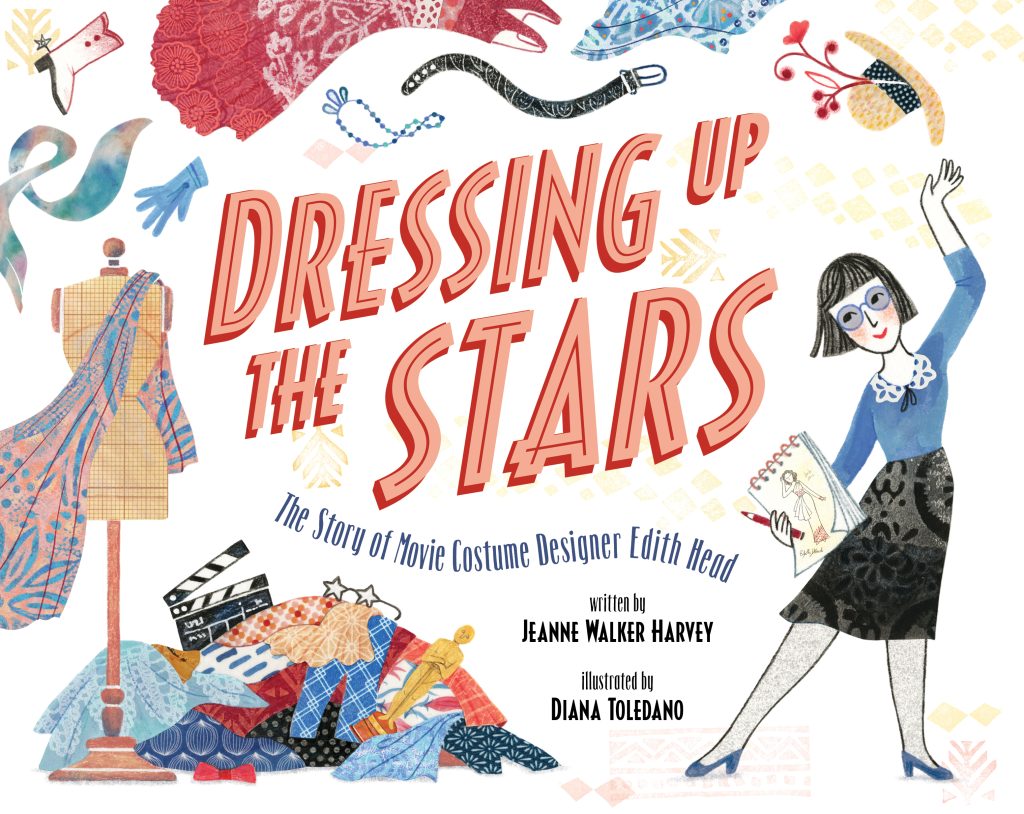 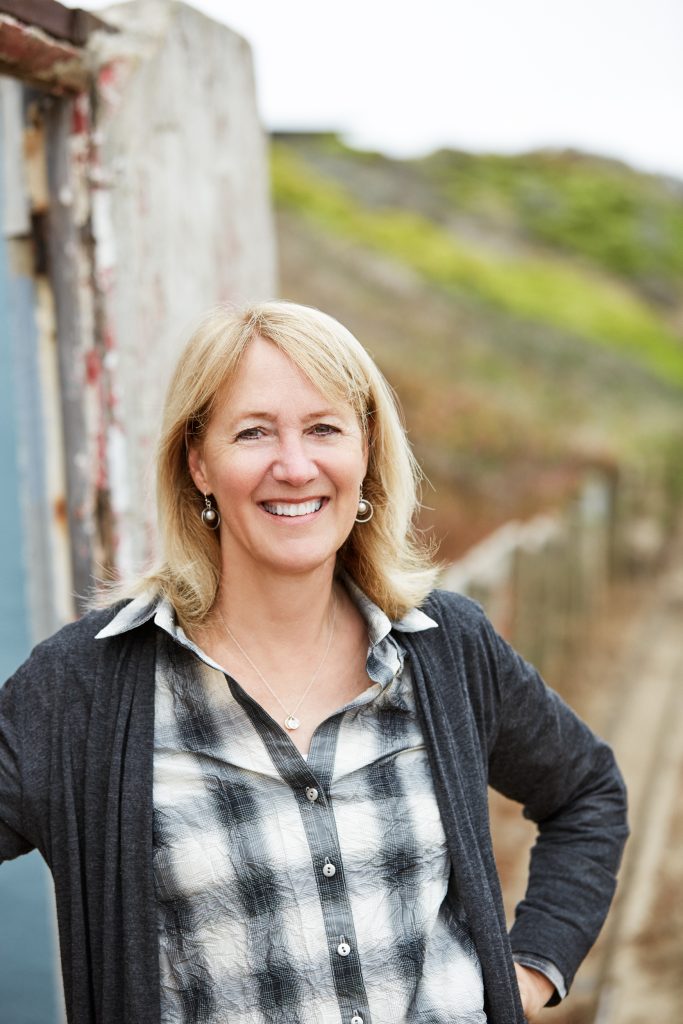 Tristian: Hello Jeanne! Thank you for taking the time to speak with Geek Vibes Nation about your new book, Dressing Up The Stars. Your publisher sent me a copy of the book, and I loved it. I found myself enamored with your writing and the way you and Diana Toledano worked together to bring Edith Head’s  extraordinary story to life.

Could you tell our readers a little bit about yourself and your new book?

Hi Tristian! First, thanks ever so much for inviting me to talk with you and the readers of Geek Vibes Nation. And, wow! I really appreciate your kind words about our book. I’m so very glad you like the way Diana and I chose to tell and show Edith Head’s story. And I agree with you that Edith Head is an endlessly fascinating figure, and I feel so fortunate I was able to write a children’s book about her.

I’ve had many job hats along the way to becoming a published children’s book author. I’ve been a roller coaster operator, a software licensing attorney, a middle school language arts teacher, and a long-time docent for school groups at the San Francisco Museum of Modern Art. But no matter what job hat I was wearing, I was always writing and submitting stories. It just took quite some time to get published. So now I’m living my childhood dream of being a children’s book author.

Our book, “Dressing Up the Stars: The Story of Costume Designer Edith Head” is a picture book biography that tells the story of how Edith, a shy girl living in remote time mining camps, became one of the most legendary costume designers in Hollywood. She rose to the top of her field as the first female to lead a major Hollywood studio costume department at the Paramount Studio.

Tristian: Do you remember when you first discovered Edith Head’s work? What drew you to her? Did you always know you wanted to write a book about her?

I first learned about Edith Head when I was a young girl growing up in Southern California. My mom and I would watch on TV the Academy Awards being filmed in nearby Hollywood. We always looked for the distinctive Edith Head with her straight cropped hair, round glasses, and a dazzling dress she had designed for herself. And it seemed like she was always nominated for an Oscar (35 times!) and often won which was exciting to watch. She actually won eight Academy Awards for her costume designs which is more Oscars than any other female (including actresses) has ever received. I didn’t know much about her personal life until I started researching her. And then I was drawn to her persistence in following her dreams, and knew I wanted to write a book about her.

Tristian: You’ve written several books for young readers, and how was writing this book different from your other projects?

For picture book biographies, I always look for primary sources — interviews, diaries, journals, autobiographies, articles authored by the person. For this Edith Head biography, I was pleased to find her autobiography, The Dress Doctor, that talks about her childhood and years as a young adult. I also could watch her speak on talk shows and TV programs about the movie industry. But what was most unique about this project was that I got to rewatch classic movies and really focus on the costumes and think about how Edith Head’s costumes enhanced the storyline. Pure fun!

And I want to emphasize what a delight it was to work with Andrea Welch, the amazing Executive Editor of Beach Lane Books. She had so many incredible ideas of how to enrich the story of Edith Head. Andrea is one of those editors who is so gentle, kind, and insightful about giving editing suggestions. She is a true star of an editor! And Danielle Collins who joined Beach Lane books/Simon & Schuster a few years ago, is also a terrific editor who had a natural way of inspiring the shaping and wording of this story. I feel so fortunate to have worked with both of them.

Tristian: As a fellow creative person, did you learn anything about Edith’s life that spoke to you on a personal level?

Definitely! Edith Head was someone who worked hard at learning her craft and persisted despite challenges. It always helps me to hear about people who continue doing what they love to do despite setbacks, especially in creative fields.

Tristian: What is your favorite Edith Head creation?

Oh my! That’s impossible for me to choose. But I’ll give an example of a favorite set of gorgeous dresses that Grace Kelly wears in the movie, “Rear Window.”  I rewatched “Rear Window” last night because I thought this movie set during a sweltering New York City summer was the perfect fit for the weather we’ve been experiencing. Jimmy Stewart, as Jeff the photojournalist, has no interest in high fashion, and the dresses Lisa wears accentuate the couple’s differences. However, when Grace Kelly as Lisa climbs the fire escape ladder to break into the murderer’s apartment even though she is wearing a beautiful flouncy patterned dress, Jeff sees her in a new light as more of an adventurer. Edith Head used costumes to develop not only the character, but also support the plot and premise of the movie. No wonder she and Alfred Hitchcock did so many movies together.

Tristian: What was it like collaborating with Diana Toledano to bring Edith’s story to life? How much input do you have on how she illustrates what you’ve written?

From the moment I saw the first set of illustrations, I was so impressed by Diana Toledano’s talent and creativity in capturing Edith Head not only as a girl in the desert, but as a struggling and then successful movie costume designer. And her illustrations convey such a whimsical fresh spirit, yet also the strength of character of Edith Head.

I couldn’t be more pleased with their choice of Diana. The editor and art director are the ones who worked with Diana regarding the illustrations. However, I did have some fun exchanges with Diana during the process about some of the particulars, such as which Los Angeles movie house Edith Head visited as a high school student. And my amazing editor, Andrea Welch of Beach Lane Books (Simon & Schuster), shared the illustrations as they were being developed which was exciting.

Tristian: What do you feel is the ultimate takeaway from your book and Edith Head’s life overall?

That’s a great question. I hope readers are inspired by Edith Head’s perseverance and passion to follow her dreams despite challenges and setbacks. She actually talked her way into a job sketching costumes for Paramount Studios even though she didn’t know how to draw or sew costumes. And as a costume designer for movies, she often had to address conflicting interests of different people involved with the movie. As Edith said, the movie stars knew what they wanted to wear, but the producer and director had specific ideas. Then the sound person said the dress fabric made too much noised when it the actor moved. The color consultant said plaids and tweeds wouldn’t work onscreen. Then the set director said no blue because the interior of the room was blue. And then the front office said the costumes will cost too much.  And Edith Head successfully juggled all of this!

As the actress Bette Davis said, Edith Head was “the queen of her profession. She will never be replaced. Her contribution to our industry in her field of design, her contribution to the taste of our town of Hollywood, her elegance as a person, her charms as a woman – none of us who worked with her will ever forget.”

Tristian: What advice do you have for young readers who are interested in pursing a creative career in the future?

Go for it! The world needs creative people. Do everything you can to master your craft. And dream! As Walt Disney said “If you can dream it, you can do it.”

Tristian: Can you tell us anything about what you’re working on next?

I’m excited to be working on another picture book biography about a creative person, a unique artist. I can’t share more, but hopefully very soon. Stay tuned!

Tristian: Where can our readers connect with you online?

I would love to hear from your readers! They can send me an email via my website: www.jeanneharvey.com or find me on Twitter @JeanneWHarvey or Pinterest @JeanneWalkerHarvey.

Thanks again for inviting me to share with Geek Vibes Nation some of the backstory of “Dressing Up the Stars: The Story of Costume Designer Edith Head.” I really enjoyed answering your thoughtful questions.

Dressing Up The Stars can be purchased everywhere books are sold on September 23rd. Check back next week for Geek Vibes Nation’s review of the book.

Discover the true story of how a shy miner’s daughter became one of the most legendary costume designers in Hollywood in this inspiring nonfiction picture book biography.

As a child in the small mining town of Searchlight, Nevada, Edith Head had few friends and spent most of her time dressing up her toys and pets and even wild animals using fabric scraps. She always knew she wanted to move somewhere full of people and excitement. She set her sights on Hollywood and talked her way into a job sketching costumes for a movie studio.

Did she know how to draw or sew costumes? No. But that didn’t stop her!

Edith taught herself and tirelessly worked her way up until she was dressing some of the biggest stars of the day, from Audrey Hepburn to Grace Kelly to Ginger Rogers. She became the first woman to head a major Hollywood movie studio costume department and went on to win eight Academy Awards for best costume design—and she defined the style of an era. 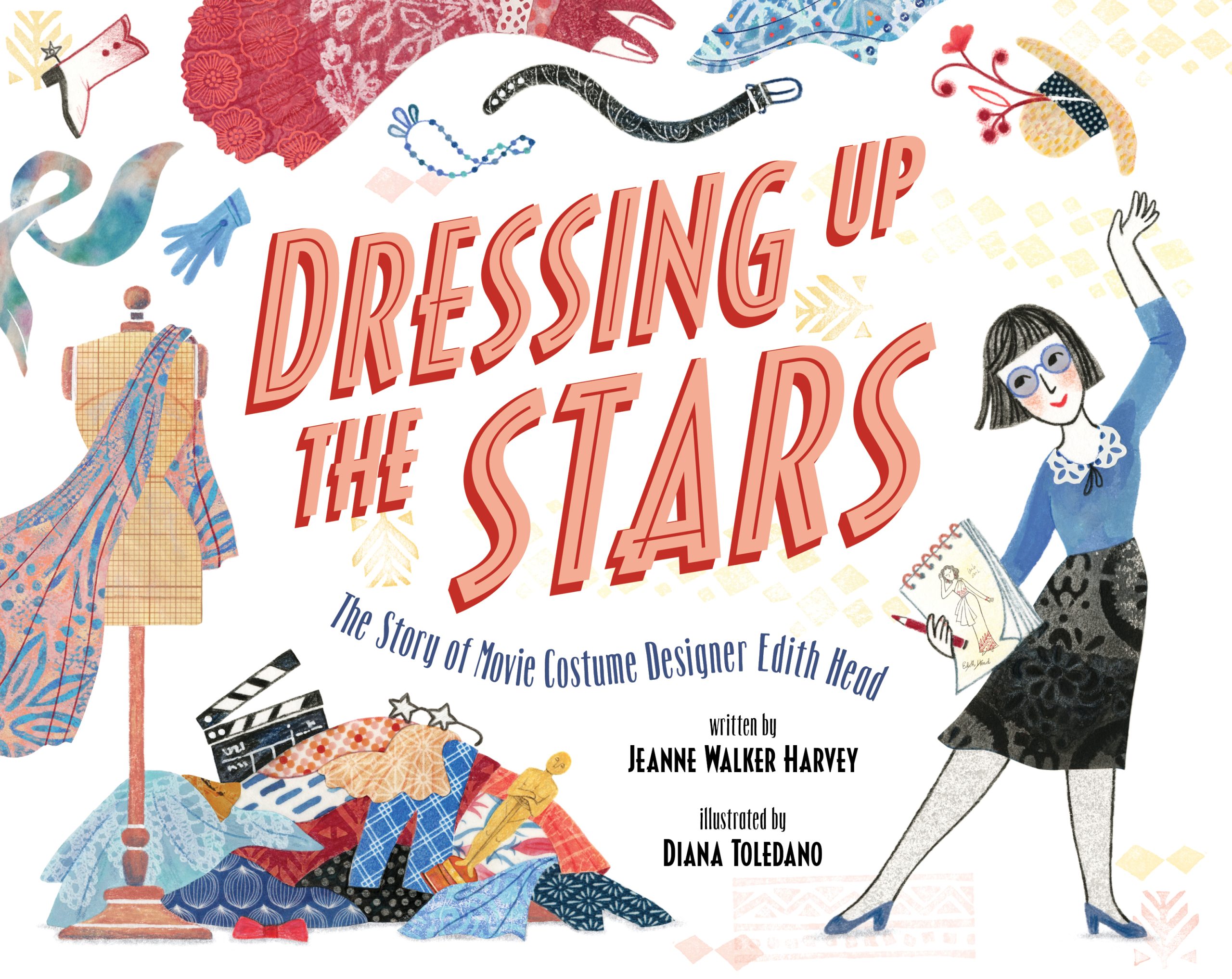