Clint Bentley is in his attic office, sitting in the middle of two concave walls to make a pointed ceiling, perfectly framed for yet another interview about his award-winning film, Jockey.

“It’s funny to [still] be talking about it. We shot it in 2019, edited through the pandemic, and then it has spent the last year coming out. It’s just kind of surreal how far it has come from something that we did make completely independently with just ten people on a racetrack.”

Over a year since its premiere at Sundance in 2021, and almost three years since the film was shot, the film is now gearing up for a digital and physical release courtesy of Sony Pictures Classic. It feels like Bentley is reaching the finish line of a long, perhaps extended, period of his career, which is oddly fitting given Jockey’s subject matter.

Starring Clifton Collins Jr. in a Sundance-award-winning performance, the film centers on an aging horse jockey who is approaching his own finish line, whether he likes it or not. As his body continues to deteriorate, and a younger jockey appears claiming to be his son, he is forced to reckon with how he wants to spend the final years of his career.

With a directorial debut as successful and embraced as this one, Bentley’s career is far from over. I was lucky enough to sit down with him to talk about the making of the film, the benefits of working with a small crew, and how he achieved the film’s visual realism.

The following interview has been edited for length and clarity.

Larry: Jockey was nominated for the John Cassavetes Award at the Independent Spirits. I recently spoke with Best First Feature nominees and winners for 7 Days, Roshan Sethi and Karan Soni. They talked a lot about how having a small crew really brings out what they called a “spirit of generosity” and a sense of family when making a movie. I was wondering if you could speak to that spirit while working on Jockey.

Clint: They said that beautifully. There is a generosity that can come out of it. None of us are getting paid very much, so you know you’re all there for the right reasons and you’re all there to try and make something beautiful. We’ve seen a lot of examples where it can go wrong with some films where the producers and the directors don’t take care of their crew: they don’t think about their safety, they don’t take care of their meals, they work them too long in terms of their days. If that respect is paid to your crew––making sure they’re taken care of, making sure you’re not overtaxing them, giving them good turnarounds between their days and giving them a real weekend––it just adds so much to [the production]. It really came through on Jockey. Every time I talk to filmmakers who are thinking about making a film for no money, that’s the only thing I drill into them. It’s like, “hey, it’s good to think about the film itself, but think about your people as well.”

Larry: Treat your crew well, absolutely, especially since I know that you really challenged your crew on this film. Something that really struck me was how many scenes take place during golden hour, which I know your cinematographer Adolpho really pushed for. Can you talk to me about how you guys managed to shoot so many scenes considering golden hour is an infamous time constraint.

Clint: I’m happy to report that it was surprisingly easy. We kind of marvel at movies that are shot during golden hour and think “I’d never be able to do that,” but if you’ve got a good DP [director of photography] and a good crew who are like on the ball and ready and you’ve gotten great actors––if you can structure it in such a way to just let something beautiful unfold in front of the camera, rather than trying to control every element, you can really get something magical. I think that’s the surprising thing. We only shot the film for 20 days and didn’t work many long days. We got everything we needed in the golden hour and didn’t have to do any reshoots. It’s easier than you think it is. It’s a little bit counterintuitive, especially thinking as a director and what is kind of drilled into us, but the more you can give up control in a thoughtful and open way, the better the results can be if you’re working with great people.

Larry: That’s very encouraging to hear! The cinematography is so gorgeous and it feels very natural, which helps a lot with the docufiction look that you’re going for in Jockey. But I’m also curious in terms of the interior scenes, they feel almost entirely naturally lit. I’m curious, was there any additional motivated lighting for any of those scenes?

Clint: There was a bit, but it was only when necessary. It was kind of a work in concert between our DP, Adolpho Veloso, our gaffer, Elliot Travis, and our production designer, Gui Marini. Once Adolpho and I blocked everything and then we blocked it with the actors, they would kind of figure out, “Okay, the lights that exist here, do they do enough? If not, how can we add a light that might still exist in this space?” We just tried to do as much as we could with as little as we had, usually only adding one, maybe two, lights. There wasn’t this idea of going into any of these spaces and completely changing them. It was just augmenting here and there.

Larry: It does really feel like you’re in these rooms with these people. I’m really curious to hear about some of your inspirations in crafting this look for the film.

Clint: My influences mostly go to films made outside of the US. That was what I was watching coming into this, films that you watch where you don’t really know who’s an actor and who’s not in some cases, films that really make you feel like you’ve gone to another culture and you’ve been transported somewhere else. I think that’s a lot of the films of Abbas Kiarostami [Iranian director and screenwriter]. The one that stands out the most is Taste of Cherry [winner of the 1997 Palme D’or], which is this beautiful meditation on this man who’s trying to die and trying to figure out how to die well. Happy as Lazzaro by Alice Rohrwacher [Italian director and screenwriter], and really all of her films, are incredible. And then also Hirokazu Kore-eda [Japanese filmmaker, directed 2018 Palme D’or winner Shoplifters] was a big influence in thinking about how you let a film breathe and how you just relax into a movie. I could go on and on and on, but those are the ones that I remember watching the most as I was trying to figure out how to make Jockey. 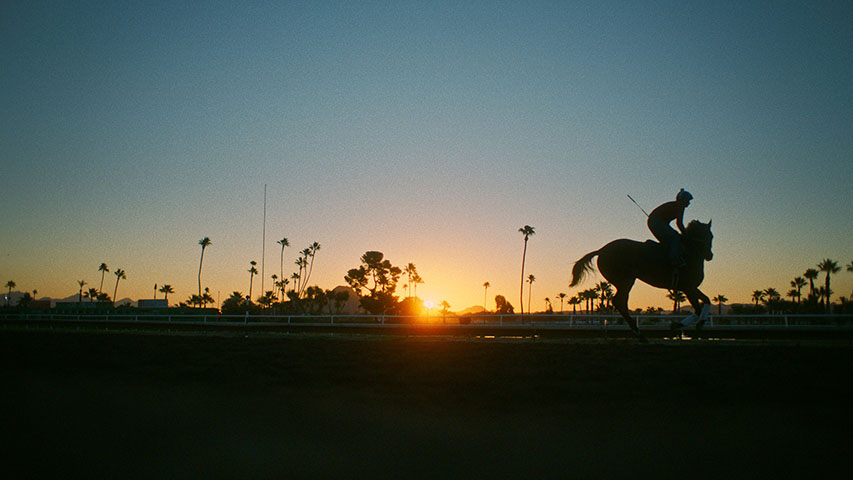 Larry: That’s a really expansive palette. It’s really cool to hear about all of those different inspirations. The last question I have for you, continuing to talk about other people’s works that are inspiring you––I was wondering if there was a movie or TV show that you’ve seen recently that just really struck you or has been inspiring you lately?

Clint: There are many, but I’ll say the one that I just started watching this weekend. Atlanta is back and the first two episodes are out. I think that’s one of the most brilliant things to come out in a long time. I don’t know how they do what they do in terms of making something that feels so natural and so deep and at the same time so kind of light and playful. It’s amazing.

“Jockey” will be available to rent or own digitally on March 29th and on Blu-Ray or DVD on April 5th.