‘Kevin Can F**k Himself’ Season 2 Review: A Sensational Send-Off 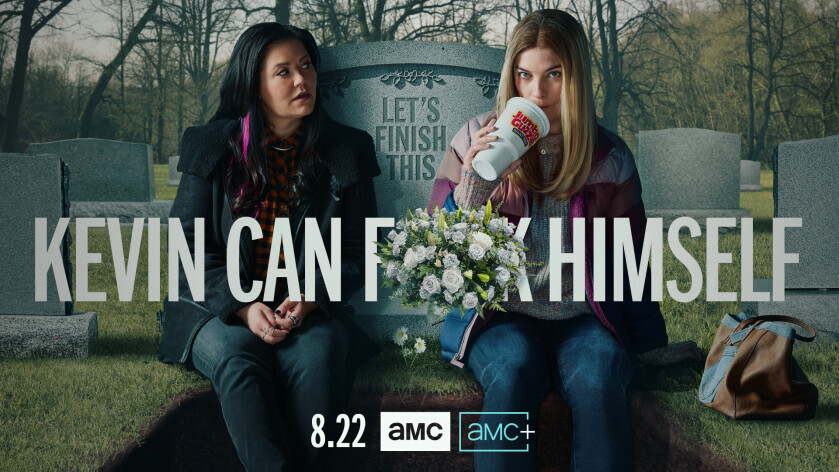 The following piece is a spoiler-free review of Kevin Can F**k Himself season two.

The central conceit of Kevin Can F**k Himself (2021-2022) is the tension between the sitcom world audiences are conditioned to accept, and what the reality of that world is like for the long-suffering characters. For the show, that means a bone-deep examination of the Sitcom Wife™. Allison McRoberts (Annie Murphy) has dealt with her husband Kevin’s (Eric Petersen) near-sociopathic lack of empathy for too long. The show’s brilliant first season spun out what happens when Allison decides the only path to salvation is killing Kevin. By oscillating between sitcom and prestige drama aesthetics, and pulling characters like Patty (Mary Hollis Inboden) and Neil (Alex Bonifer) into the darkness, that season eviscerated the vapid concept of the sitcom as aspiration. In its sensational second and final season premiering August 22 on AMC, Kevin Can F*k Himself examines the fabric of the lies we tell ourselves to survive.

Season two’s story picks up right where season one left us. Patty and Allison have beaten Neil off after he tried to kill Allison. The immediate danger passes. Now the two face a greater challenge. What to do with a bleeding Neil who knows all about Allison’s failed attempt to kill Kevin? Not to mention Kevin’s sudden urge to run for public office. Also Patty’s intensifying relationship with Tammy (Candice Coke). All told, the pressure is immediately crushing. The season puzzles through Allison’s recognition that killing Kevin may be an impossible lift. Beyond her, Patty grapples with her and Tammy’s relationship. With futures threatened by festering pasts, Allison and Patty anchor a taught and, yes, hilarious 8-episode reckoning with hope and fear.

So much of that story sings because of its magnificent worldbuilding. Production designer Tony Fanning and directors of photography Adrian Peng Correia and Shannon Madden erect exquisite dual realms. The overly saturated multi-cam look of the sitcom sequences, stuffed with intentionally fake-looking props. All the grim and grey-forward drama sequences filled out with weather clothing and grimy patches hidden just out of the sitcom camera range. It is not simply that they convincingly sell the same locations and characters across realms. What makes it miraculous is that it’s only jarring when the narrative requires it to be so. In lesser hands, the rapid shifts could disorient to the show’s detriment. Instead, the two stand on their own while blending into a cohesive flow of oppositions. Their differences are the point and are chameleonic enough to meet any mood.

That fact speaks to the incredible unity of creative departments on this show, and how every area pristinely serves the stories at play. In one mid-season sequence, Kevin, Neil, Pete (Brian Howe), and Tammy watch a scary movie at the house while Patty and Allison limp back from a failed escapade. Kevin and Neil were so scared by a noise downstairs they called Tammy 13 times until she came. It turned out to be Pete, but not before guns came out. Now they watch, and when Allison struggles with the door Kevin is convinced it’s a killer. He rushes towards it and kicks the door as Allison opens it, swinging it into her face. The juxtaposition of the goofiness in the living room to Allison’s immediate agony on the front porch embodies the show’s marvelous thematic and tonal calibration. We viewers are pinned between humor and dismay.

Thinking about the cast asked to match up to all this, my thoughts go to the phrase “acting Olympics,” something Evan Rachel Wood said while promoting Westworld (2016-). Wood was referring to the need to go from incredibly emotional to devoid of emotion while playing a robot. I find the idea quite applicable here. This is especially true of Murphy and Inboden, the performers most tasked with see-sawing between sitcom and drama scenes. Neither has a massive difference in performance. Rather, both must subtly modify delivery and physicality to play into genre and format. Murphy retains her awkward charm across realms. She simply modulates to consider laugh tracks and physical pauses after punchlines when dropped into her sitcom reality. She shelves her trauma and suffering behind a Kevin-adjacent veneer. Inboden tunes her rage and fear into caustic comedy or self-hatred without batting an eye.

That pair is also, even more so than was already the case in season one, the soul of season two. Allison and Patty began the show as enemies, grew into uneasy allies, and have ended up at a point of true, loving friendship, even if neither will quite put it that way. Murphy and Inboden are dazzling in every scene together. Late in the season, the two sit on a couch and drink, talking about their insane lives in the same way you might sit and chat with a friend about your crazy weekend party. The two are bonded by their shared hell. They have also chosen again and again to support the other no matter the cost. All of that saturates each exchange on that couch, and the two actresses’ effortless chemistry shines. You want them to win, no matter the twisted (but arguably justified) actions they take.

It is a shame that this is the last batch of Kevin Can F***k Himself episodes we’ll get. Yet, it is also hard to deny that this two-season run exists as a template for how to execute a high-concept idea flawlessly. Across sixteen episodes, Kevin Can F***k Himself gifted us with a sublime ensemble of performances, stories that somehow managed to skewer sitcoms while running circles around the existing examples in terms of humor, and deliver a satisfying arc for Allison, a morally murky protagonist for the ages. In a year of exceptional television, Kevin Can F***k Himself more than holds its own as among the best shows you can watch. My, how I will miss it.

The second and final season of Kevin Can F***k Himself premieres August 22 at 9pm ET/PT, only on AMC and AMC+.