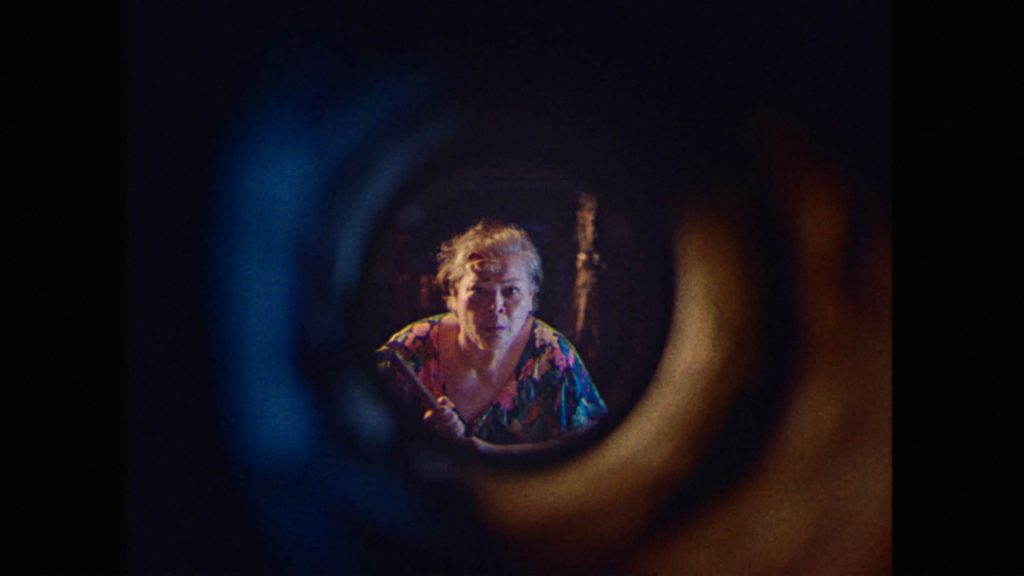 Hailing from first-time feature director Martika Ramirez Escobar, Leonor Will Never Die (2022) is a virtuoso journey through the ardent stages of creative processing. Working from a script she also wrote, Ramirez Escobar crafts a film with confidence and flair to spare. Her story centers on retired action movie writer-director Leonor Reyes (Sheila Francisco), her son Rudy (Bong Cabrera), and their struggle to stay afloat while managing unresolved grief from their son and brother Ronwaldo’s (Anthony Falcon) early death. Spotting an open call for screenplays, Leonor digs up an unfinished script that gradually reveals itself as a semi-autobiographical reckoning with Ronwaldo’s death, just filtered through gritty street-level mob action. When a television accidentally falls on Leonor, she slips into a coma where she finds herself in the midst of her unfinished screenplay. What follows is a tale of family, love, and grief that blurs every line between movies and reality.

Structurally, the decision to define two worlds within Leonor Will Never Die means Ramirez Escobar assigns herself the task of stylizing a pair of distinct filmic realms. What’s remarkable is that she sculpts both with a cinematic vitality that should make many more seasoned directors sit up and take notice. Leonor’s pre-accident reality is a muted and humid present-day Philippines. She and Rudy’s home is cluttered and gloomy, a cramped collage of browns, beiges, and dust. Ramirez Escobar shoots most of the sequences with meditative shots, assured in their purpose to settle in and observe the dull ache that courses through Leonor and Rudy’s lives. They argue about an unpaid electricity bill. Leonor can hear Rudy talking on the phone venting about her memory while in a narrow bathroom. It’s only when Leonor begins to write again that a sense of vigor enters the frame, a deft choice by Ramirez Escobar. Shots get shorter, closer up, and propel us towards what we think is Leonor’s triumphant return.

Contrastingly, the movie world playing in Leonor’s head, first while she writes and then once she’s comatose, is an exquisite emulation of 1970s and 1980s low-budget action crime films. Ramirez Escobar opts for a 4:3 aspect ratio as opposed to the widescreen of reality. The film stock is grainier and the colors far more saturated. Working with DP Carlos Mauricio, Ramirez Escobar’s is transportive, even more stunning to me after spending weeks late last year watching a string of films produced in the time period she is channeling. Adding to the baseline look is her wonderful humor in replicating the quirks of the era: copious long zooms in dramatic moments, slightly ridiculous and overly obvious music cues, and even a string of doubled motions in fight scenes perfectly copying the oddities we got from rushed editing. All of this assembles a stunning counterpoint to Leonor’s normal world and makes her entrance into the film world during her coma all the more divinely apocryphal.

The experience of watching Leonor Will Never Die reminded me of Kirsten Johnson’s recent documentary Dick Johnson is Dead (2020). In Johnson’s film, she combines unvarnished documentary footage of herself and her dying father with luxuriously staged sequences imagining ways he could die. While Ramirez Escobar’s film is fiction as opposed to Johnsons’s non-fiction, they make an apt pairing because Ramirez Escobar relentlessly deconstructs the bounds of narrative feature filmmaking. At first, there are clear delineations between reality and the movie coma-world that Leonor experiences. Beyond the aforementioned distinctions in Ramirez Escobar’s style, the screenplay separates the realms the way one might isolate flashbacks from the present day. Yet, the further we progress into the film, the less those bounds exist. People from the real world appear as different characters in the film. Snippets of Leonor’s movie flash on screens out and about in reality.

Thematically, all of this adds up to a concerted rumination on writing and filmmaking as a powerful way to process personal trauma. Leonor is in the circumstance she finds herself in because of the compounding events that followed her son’s death, and the more we learn about the circumstances of his passing the more her screenwriting clearly reflects one woman’s desperate attempt to make sense of the life she ended up living. We see her speaking lines to life while wandering around the film world, feeding the plot and its twists to the characters she walks and talks with. Possibly more so than any other film I have encountered, Leonor Will Never Die captures the raw feeling of giving yourself over to the page in hopes of channeling your soul onto the page so that you can understand it. To speak of the specifics that Leonor undertakes in her writing process would be to spoil the poignancy of experiencing them firsthand, so I simply implore you to seek out the film in order to be transported by its pathos.

Central to every part of this process is Sheila Francisco’s commanding performance as Leonor. The acting task at hand is to project a woman broken by grief and time who nonetheless used to be a towering figure in action filmmaking, even if she hasn’t picked up a camera or a pen for years. Francisco conveys this in every motion and line-reading. When she splashes water around in the bathroom to drown out Rudy’s phone call and mask the sounds of her encroaching tears. Bringing forth that elusive sparkle in her eye when she finally sits back down at the typewriter. Stretching her arms and lighting a cigarette while standing amidst the lush greenery of an alleyway garden. I was utterly captivated by every iteration of her performance, not to mention the baseline charm of watching a film focused on an older Phillipino woman. Leonor as embodied by Franciso is a wonder to behold.

Leonor Will Never Die is the sort of directorial debut that immediately causes you to imagine what a director might accomplish next. Sitting here, writing this review, I cannot help but envision the surreal and passionate wonders Ramirez Escobar will craft next. But, for now, I will cherish every frame of Leonor Will Never Die until the next project comes our way.

Leonor Will Never Die had its World Premiere in the World Dramatic Competition section of of Sundance Film Festival 2022.