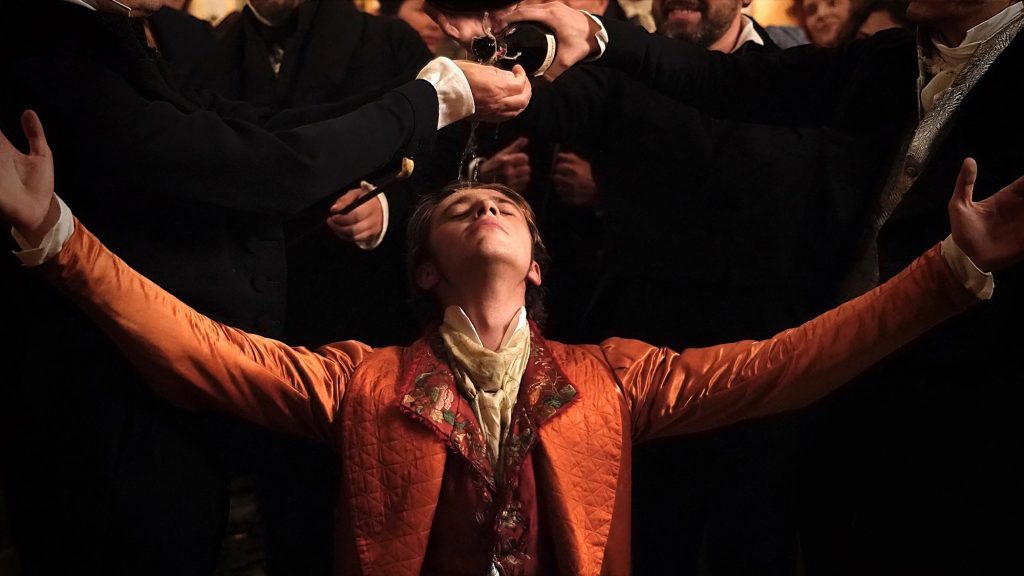 “Money was the new royalty, and no one wanted to chop its head off.”

It is 1820s France, and post-Revolution Paris is gleaming—with the bright allure of coins, jewels, exotic fruits, luxuries which attracts snobby aristocrats, corrupt grifters, merciless racketeers like flies. Even the much-renowned arts scene is dominated by said unscrupulous figures whose single goal in life is to “rake it in.” Theater performances live or die depending on whether a man is paid more to boo or cheer. Novelists seek controversy, paying critics to write positive and negative reviews alike, to secure sales. Friends don’t exist, only business contacts; artists, writers, and actors alike care only for the popular, controversial, attention grasping. In a world where money was king, there was one thing that didn’t matter: artistic aspiration.

Into this world steps Lucien “de Rubenpré” (Benjamin Voisin), as he insists calling himself, a romantic and poet from the country province Angoulême. Lucien is taken to—and dumped in—Paris after the discovery of his affair with a married aristocrat. Initially harboring innocent intentions of making a lasting literary name for himself, Lucien’s illusions are quickly shattered as he runs out of money, and he joins a corrupt newspaper to make some cash. Discovering his own searing wit and propensity for malicious insults, Lucien fully sells out his literary leanings, descending into a life of decadence and debt, sex and pleasure, fame and self-importance.

Lost Illusions, directed by Xavier Giannoli, is based off of Illusions perdues by French novelist Honoré de Balzac, renowned for his sharp-witted commentaries on French society. In that trilogy, Balzac takes aim at the corrupt publishing world, and the film is memorably successful capturing the spirit of his cynicism, drawing a damning portrait of a society where greed has run wild. Presses located in what is essentially a red light district, run by a man who is illiterate, albeit very good with numbers. Critics paid to write reviews, both good and bad, without having read the book—after all, “controversy sells,” not quality. When Lucien is genuinely impressed with a novel and finds himself stuck on writing a negative review, his editor, Étienne Lousteau (Vincent Lacoste), tells him a story of a critic who, when seeing Jesus walking on water, says: “See that? He can’t even swim.”

Lost Illusions has also found sharp contemporary relevance in Balzac’s text: there are unmistakable parallels to fake news controversies today. Le Corsaire-Satan, the newspaper Lucien writes for, explicitly specializes in “canards” (French for ducks), a term for what’s essentially fake news. As the paper’s head editor releases a crateful of ducks to run around the office during a meeting, he joyfully exclaims: “Our editorial policy is simple: the probable will be upheld as truth!” Though our society today has, for the most part, moved past ink and paper, the rampant spread of misinformation for profit remains a pressing concern. Even today, one line from the film remains resonant: ultimately, “the only truths that mattered were sales figures.”

As the constant use of quotations throughout this review implies, this movie is endlessly quotable. But that turns out to be an issue as much as a feature. Lost Illusions feels like a novel that is trying its best to be a film. It’s heavily reliant on a narrator who constantly dispenses exposition, telling us what’s happening in the plot, what each character is feeling. It’s an experience akin to watching an audiobook. This tell-not-show style makes the movie feel somewhat disjointed. Often, we don’t see an event, only told what happens and shown the consequences, so character arcs and plot don’t quite connect as smoothly as they would have if shown more consistently onscreen.

The points where the film does use visual imagery to communicate ideas are impactful: the canard scene, where the chaotic release of live ducks in a cramped newspaper office communicates the willful spread of misinformation by the Le Corsaire-Satan, is a great example. I wish Lost Illusions used this visual language unique to filmmaking more, instead of relying on the literary language of Balzac’s original work—especially considering how beautiful the cinematography of the film already is.

That being said, the actors do a great job with the scenes they have. Voisin is easily the standout. His character undergoes arguably the most dramatic changes of any character in the film—the Lucien at the middle of the movie behaves dramatically differently than the Lucien at the beginning and end, a kind of degenerative rake’s progress that Voisin captures perfectly. His ability to shape his body movement and language allows him to embody his character arc well.

It’s sure an interesting experience, reviewing a film about corrupt critics as a critic; as Lousteau points out, any facet of a novel can be spun as good or bad. And it’s true that worth is subjective, that one thing that is good to one can be spun as bad to another, or vice-versa. However, though blistering, Lost Illusions is not an entirely pessimistic film, nor does it argue that art has entirely gone extinct. Artistic value, non-profit driven creativity, uncompromised intentions— perhaps those still remain strong motivations, but only after all illusions about the world have been lost.

Lost Illusions is currently playing in select theaters courtesy of Music Box Films. The film will be available on Digital platforms beginning August 16th, and on Blu-Ray and DVD on September 20th.

The story of the rise and fall of writer Lucien de Rubempré, who is corrupted by greedy Parisian society, has striking parallels to today.