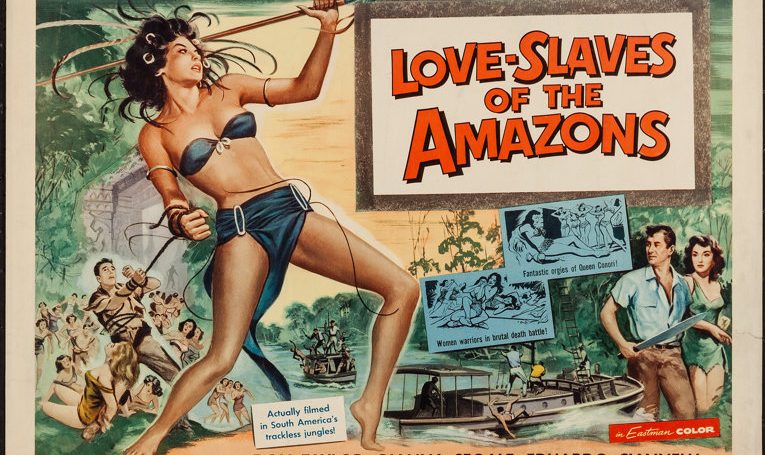 From Curt Siodmak, the sensational mind behind The Wolf Man, The Ape, The Magnetic Monster, I Walk with a Zombie and Donovan’s Brain, comes the thrilling Love Slaves of the Amazons. An American archaeologist (Don Taylor, The Naked City) and his partner (Eduardo Ciannelli, Mysterious Doctor Satan) are captured by a lost tribe of women warriors intent on turning the men into their “love slaves.” Together with another captive, Gina, they must escape from the lustful clutches of the Amazons if they hope to return to civilization. Beautifully filmed on location in Brazil, this eye-popping, action-packed adventure features river pirates, alligators, snakes, exotic dance numbers and green-skinned beauties of the jungle!

For thoughts on Love Slaves Of The Amazons, please check out our discussion on The Video Attic:

Kino Classics presents Love Slaves Of The Amazons with a beautiful new 1080p master transfer in its original aspect ratio sourced from a 2K master. While there remains some source damage, the film is largely clear of overwhelming instances of damage or dirt. The film features some vibrant colors within the costumes, makeup, and environments that pop off the screen with a great radiance. The black levels are deep with a pleasing stability throughout. The level of detail and clarity is very pleasing with a lovely amount of natural film grain intact. The grain field can get a bit thick in certain shots, but mostly it resolves well. The most obvious decline in quality comes during any optical transitions. There are also a sprinkling of shots that present a bit soft, which likely dates back to the source limitations. Compression artifacts, banding and other such issues do not pop up as an issue in this transfer. This presentation finds Kino Classics turning in good work.

The Blu-Ray comes with a rock solid DTS-HD 2.0 Master Audio track that serves this film as well as you would want. Dialogue and environmental noises are represented in pleasing harmony with all competing elements. This includes the adventurous score which comes through with vibrancy and clarity. Even with its prominence, dialogue and other important information does not get overpowered. There is thankfully not much in the way of age related wear and tear such as hissing or popping. Sound effects and musical elements appear to be accurate to the intent of Curt Siodmak. There are optional English (SDH) subtitles included for the feature film. 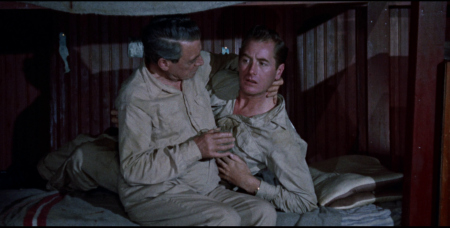 Love Slaves Of The Amazons has a title that reveals the level of quality that you might expect from this adventure. The film is far from a great work of art, but there is a cheesy quality that makes it a fun watch in the right context. The brief runtime really helps this cause, even if the direction from Curt Siodmak tries to temper momentum during odd moments. There are much better jungle adventures, yet those who have a soft spot for the genre should check this out. Kino Classics has released a Blu-Ray featuring a solid A/V presentation and an informative new commentary track. Those wanting something genuinely thrilling may want to look elsewhere, but I could see this being a raucous group viewing experience.

Love Slaves Of The Amazons will be available to purchase on Blu-Ray on June 14, 2022.