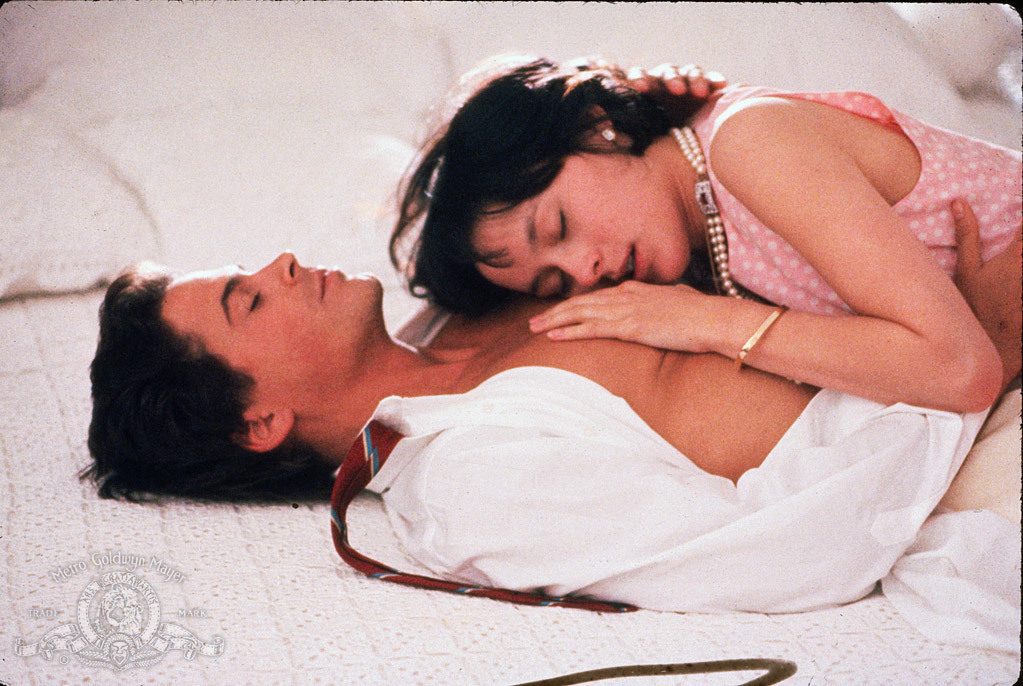 A few years back Nicole Kidman got a minor amount of press attention for discussing her wish for studios to create more “sexy date night movies” that used to be much more in-demand such as Basic Instinct or Cruel Intentions. Those movies that would deliver a serviceable amount of thrills and intrigue, along with a little bit of sexuality to titillate the audience before sending them off into the night. After a recent viewing of the 1988 romantic mystery thriller Masquerade from director Bob Swaim (Half Moon Street), it feels like this is the type of movie for which Kidman was looking. The film may be best known by some for being written by Dick Wolf, just a short while before he would be dominating with a little show called Law & Order. With a young, beautiful cast and a twisty narrative, the film aimed to be an almost Hitchcock-esque mystery that would unfurl and ratchet up the tension steadily as different pieces of the puzzle fell into place. While certainly nowhere near the Master of Suspense, the film ultimately succeeds in being fairly entertaining even with some glaring shortcomings.

From the very first moments on screen, we get immersed into the high-society setting that typifies this narrative. The images of yachts cutting through the water as young men work together to shave precious seconds off their time is all you need to see. Sailing is not an activity for the lower-class, and this movie never goes out of its way to sing the praises of the less fortunate. The closest it comes is by its introduction of who would typically be considered our hero; Tim Whalen (Rob Lowe, Parks and Recreation) is a young sailing captain who is one of the few people who is not made on money in this small town. What he lacks in monetary value he makes up for in skill, which gives him enough confidence to have an affair with Brooke Morrison (Kim Cattrall, pre-Sex and the City), the wife of his boss, Granger Morrison (Brian Davies). His world is shaken up upon the arrival of wealthy, recent college graduate Olivia Lawrence (Meg Tilly, Body Snatchers), following the recent death of her mother. After meeting at a party, the two grow close but the matter of her recent inheritance causes many problems for the two. 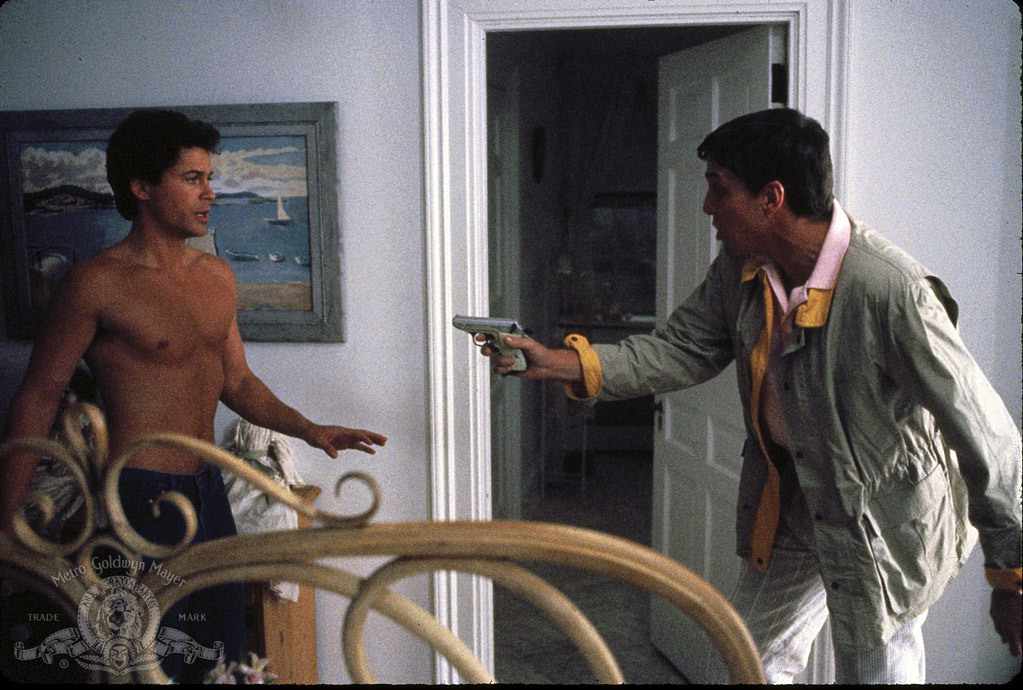 Masquerade is a film that lives and dies on the successful execution of its careful reveals, and it is by that barometer that we must avoid giving away too many plot points. It was mentioned earlier that Tim would typically be considered our hero, but as a nice twist that honor would go to Olivia. Tilly may not be the most captivating character in the film, but she plays her slightly dreamy role perfectly. She has been slightly neglected by the world, and her evolution as she comes into her own as a powerful woman is one of the more interesting and impactful points of the film. Hindering this growth is her alcoholic stepfather, Tony Gateworth (a fantastically evil John Glover), who is still living with her in her mansion with his new girlfriend (Dana Delany). An unexpected death sets off a chain of events that results in additional bodies and double-crosses. That the investigation is led by Mike McGill (Doug Savant) – a childhood friend with a romantic interest in Olivia – adds yet another wrinkle to a twisted tale.

While many aspects of this film can probably be deduced from the onset, we would be lying if we did not say there were at least a handful of genuinely surprising revelations throughout the film. The impact of these revelations are occasionally blunted by an inconsistent ensemble. Lowe does his best to anchor the narrative, but he was still not quite at a place where he could nail the nuances necessary. Glover, on the other hand, makes even the most obnoxious dialogue cut like a knife in a way that keeps you glued to the screen every time he appears – openly welcoming your disdain. In addition to Tilly, the rest of the women are right in line with what the film needs from them. As with any movie of this sort, there are a great number of narrative leaps or straight up inconsistencies that one has to roll with, but in the end the entertaining, slightly campy execution allows you to forgive all but the most egregious instances. Masquerade aims to be sexy and thrilling, and most will say it succeeds while offering up some unintended camp to the proceedings. 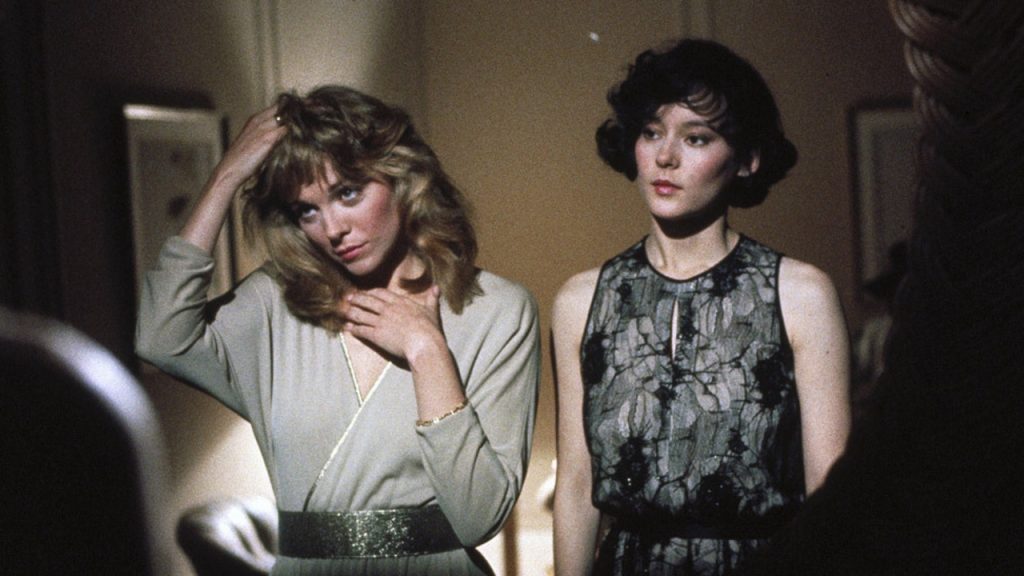 Masquerade makes its Blu-Ray debut courtesy of Kino Classics with a digital AVC encoded 1080p transfer in 1.85:1 that appears to be derived from a solid older master that is in good shape. Instances of print damage such as nicks and scratches are fairly consistent, but overall clarity and detail is excellent. The presentation is enjoyable throughout most of the runtime with image stability and delineation being quite pleasing. This transfer maintains the natural film grain of the presentation with only minor instances of seeming a bit loose. The long shot scenes in nature prove to be the least impressive, soft shots in the film. The picture maintains a nice depth even as it struggles a bit with long shots, and colors are well saturated with the bright hues of the various outfits coming through. Skin tones are natural and consistent with subtle facial features easily noticeable in closeup. Black levels hold up well with very little in the way of crush. This presentation is a really nice effort that should please fans.

This new Blu-Ray comes with a lossless DTS-HD 2.0 Master Audio mix that features all of the sounds of the film quite effectively. This is a film that utilizes music well, including the menacing score from John Barry that really comes alive here. This and all of the other music is presented with great clarity and a pleasing fidelity as they come through the room. The dialogue holds up wonderfully, coming through clearly without being stepped on by the music or sound effects. The environmental effects are delineated nicely from the sound of the rolling tide to the chatter of dinner-party guests. The track avoids most instances of age related wear and tear or distortion. This is a track that represents the film in an impressive manner. Optional English subtitles are provided on this disc. 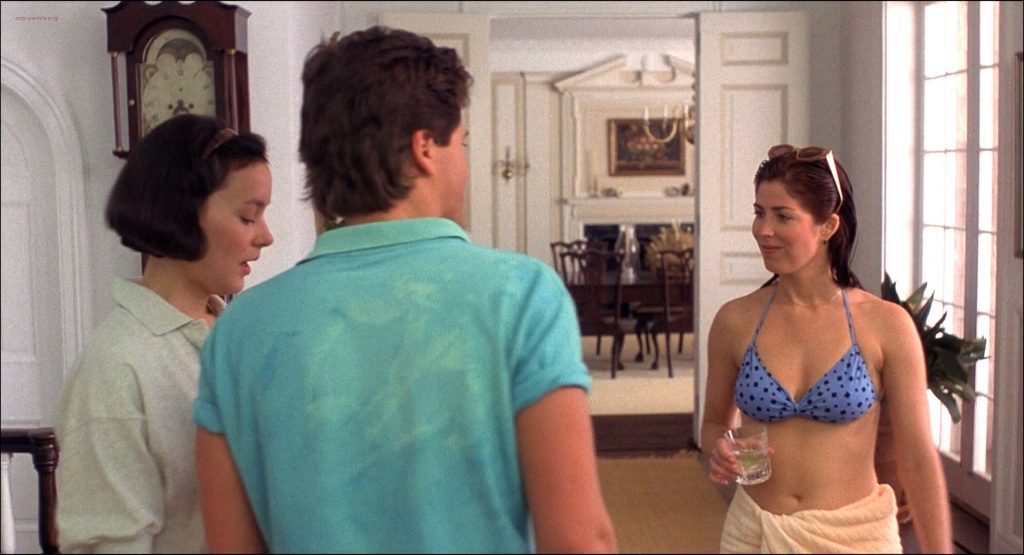 Masquerade has its share of cheesy or implausible moments, but the film also provides some impressive twists and turns that will keep you engaged. Meg Tilly and John Glover prove to be the standout performances in a film filled with a mixed bag of an ensemble. Kino Classics has provided a Blu-Ray that features a solid A/V presentation and a mostly entertaining commentary track. Those who have been clamoring for this one to arrive on Blu-Ray should be pleased by the results.