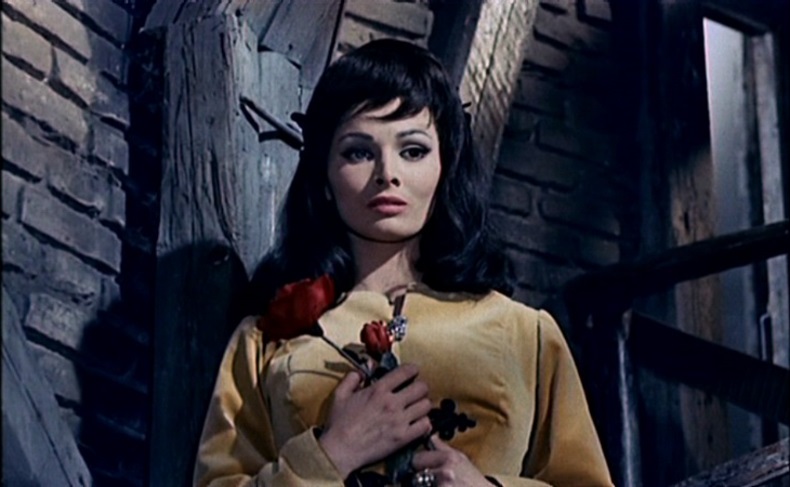 The Italian film industry has crafted some of the most indelible films that cinema has ever known. With filmmakers such as Mario Bava (A Bay Of Blood) and Dario Argento (Deep Red) to their credit, the impact that the country has had in horror can never be discounted. Another name you can add to the list is Giorgio Ferroni (The Lion Of Thebes), who unsettled audiences in 1960 with the creepy Mill Of The Stone Women. Perhaps most notable for being the first Italian horror film to be shot in color, the film is one that clearly takes inspiration from works such as Mystery of the Wax Museum and forges its own path of subtle horror. In a humorous bit of narrative obfuscation, the film is purported to be based on a short story by Pieter van Weigen in the book Flemish Tales, but the reality is that this was just a clever ruse to yield more credence to the belief that this story could be linked to an established Gothic tale. Even without firmly established roots, this tale finds enough unsettling imagery to be effective all the same.

The story concerns the arrival of writer Hans van Arnhim (Pierre Brice) to a remote island in Holland. There are whispers even before the credits begin about the mysterious “mill of the stone women” by some of the local townsfolk. Hans is here to learn more about just that subject, a carousel of female statues of famous women who died horrible deaths. These are the creation of art professor and sculptor Gregorious Wahl (Herbert A.E. Böhme), but Hans finds something more transfixing when he lays eyes upon the sculptor’s daughter, Elfie (Scilla Gabel), a beautiful women who is unwell and guarded closely by her father and live-in physician Dr. Loren Bohlem (Wolfgang Preiss). Hans could be content with the love of his sweet, virginal girlfriend, Liselotte (Dany Carrel), but the siren of the mill proves to be too intoxicating to resist. Yet, there is darkness surrounding this old mill, and the skin-crawling secrets are soon to be revealed. 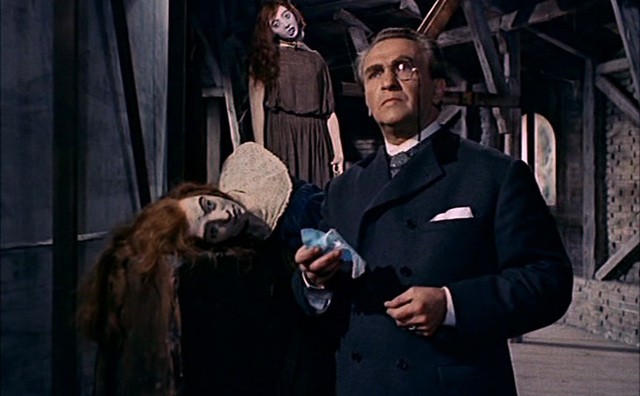 At the time of its release, Mill Of The Stone Women was given all kinds of restrictive ratings for the horrific content within, but the reality is that most of the unsettling content happens off screen and is very reserved by modern standards. Yet, there is no denying that Ferroni and his team create a really sinister atmosphere from the hazy opening moment on the water to the journey into the den of secrets which features practical sculptures that are just a little too lifelike. Gabel plays Elfie as a sympathetic figure as you see her hidden away from the world, but things become a bit more complex and violent as the layers of her character are stripped away and you are left with something truly monstrous. The lines are drawn cleanly early on between the “good girl” and “bad girl” and who you should be settling up with in the end. The performance from Böhme as Gregorious is very effective as he takes an almost incestuous interest in the protection of his daughter which gives you shives of discomfort that compounds the other obvious trappings of the story that ratchet up the creep factor.

There are four versions of this film in this Limited Edition release from Arrow Video, and thankfully none of them run over 96 minutes which allows the narrative to sustain its tension without becoming too repetitive. The difference between each version are very subtle to say the least, but some changes in dialogue and different visual effects may be enough to make the most determined fan to try on each version for size. This film never attained the same reputation as something such as Black Sunday in the United States despite being more successful in its home country. This is a bit strange considering how effective and universal the tale is once all is said and done. It is not the pinnacle of the genre, but it is a solid entry which transcends the mundane to achieve something a bit special. 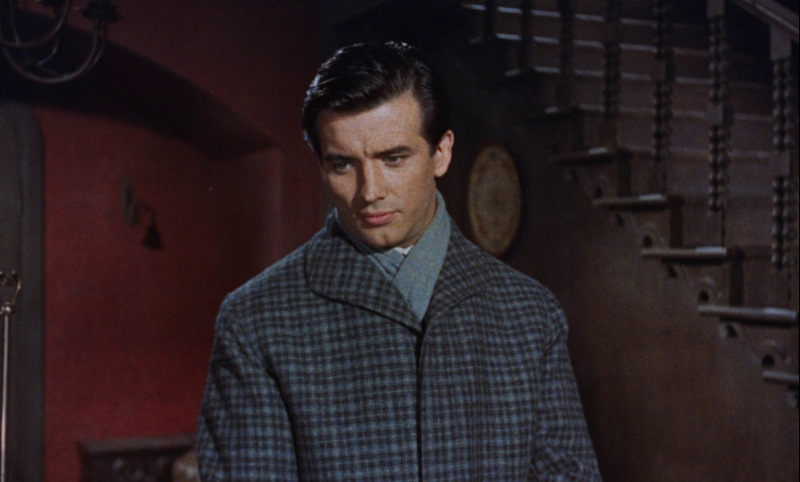 This new Blu-Ray from Arrow Video gives Mill Of The Stone Women an AVC encoded 1080p transfer in 1.66:1 derived from a 2K scan of the original 35mm Original Camera Negative. The French and US versions were conformed using a combination of the original 35mm negative and additional scanned material supplied by Subkultur Entertainment via LSP Medien. The feature has a pretty nice, thick grain structure that preserves the filmic look of the picture, showcasing distinct details in the various interiors and on the dummies. The color timing seems natural to the intention of the filmmaker with perhaps just the slightest yellow push. Colors show up on the screen nicely, especially in the bright hues of certain costumes and elements of the production design. Black levels hold up pretty well with some admirable depth to the image. Some shots contain noticeable softness, but are contained to only a small portion of the shots. There is no overwhelming damage to be found in this presentation with the Italian and English Export versions with only the most minute instances of dirt and specks in the image. Overall, Arrow has done quite a fantastic job with this title.

This set comes with various outstanding tracks including the Italian, English and French versions of the film with an LPCM 1.0 track that handles the material quite capably. This is a sonically reserved film and the tracks get all of the information across perfectly well. The score from Carlo Innocenzi has never sounded better and is used impeccably to elevate the mood of the story. There is never a moment where it threatens to overwhelm competing sounds, and it maintains a good balance so that dialogue comes through clearly. The environmental sounds such as idle chatter and the more kinetic sequences are rendered well alongside everything else. There does not seem to be any noticeable instances of age-related wear and tear outside of a minor hiss in the quietest moments. Arrow Films has given this film a perfectly preserved audio presentation that brings the movie to life in an enjoyable manner. 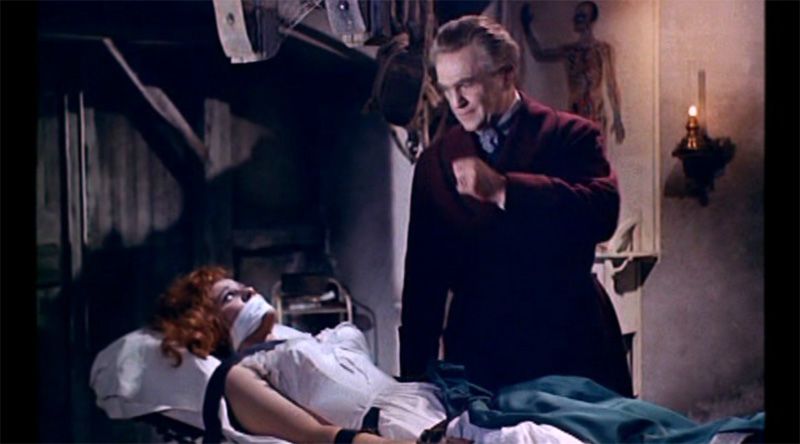 The Limited Edition Collector’s Set of the Arrow Video Blu-Ray of Mill Of The Stone Women comes beautifully packaged in a hard outer case and includes a 58-page bound book featuring two essays from Roberto Curti and Brad Stevens which delves into the film and the various versions further. There are also numerous contemporary reviews included for the film. These works provide a great analysis of the film and the genre at large in a thoughtfully written style. This package also includes a double-sided poster and six art cards. The on-disc special features are as follows:

Mill Of The Stone Women has never received the same acclaim as some of its contemporaries, but it is just as worthy of exploration as many of those titles. The atmosphere is extremely creepy and the story is well paced as it builds up to a thrilling finale. The performances are not always the most nuanced, but most of the actors do what they need to do well enough. Arrow Video has released a Limited Edition Blu-Ray featuring a pretty great A/V presentation and an excellent assortment of special features. If you are wanting to explore what Italian horror cinema has to offer a bit more, this is a great purchase. Recommended

Mill Of The Stone Women (Limited Edition) is currently available to purchase on Blu-Ray.