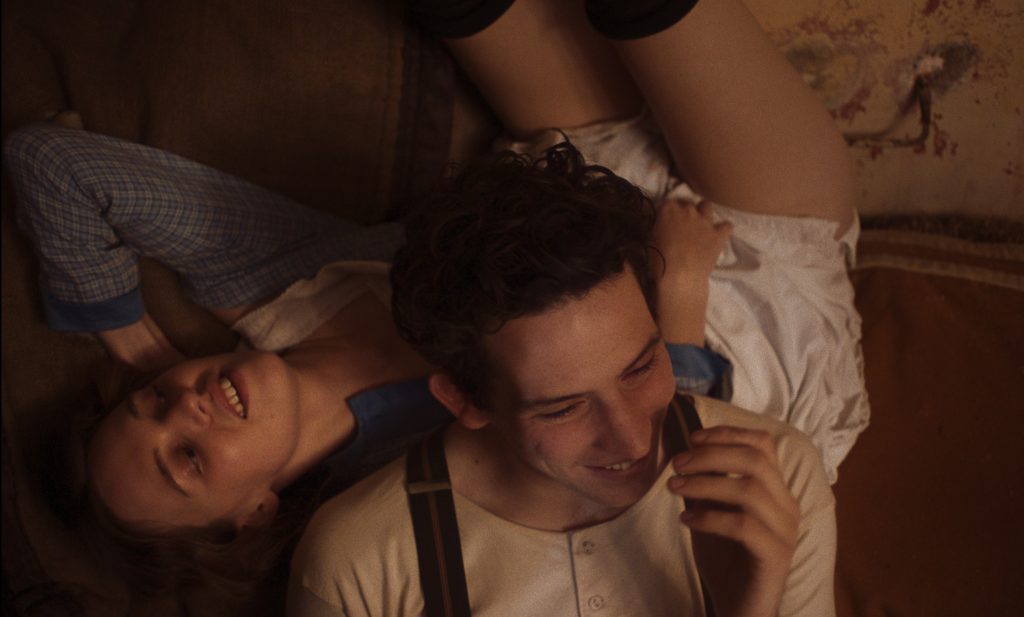 After premiering at Cannes last year followed by a short qualifying run in November, Mothering Sunday (2021) is finally in wide release. Directed by Eva Husson and adapted from Graham Swift’s novel by Alice Birch, the film circles Jane Fairchild (Odessa Young) on Mothering Sunday, 1924. Jane works as a maid for wealthy couple Godfrey (Colin Firth) and Clarrie Niven (Olivia Colman). When the Nivens ride off to join friends for a picnic giving Jane the day off, she rendezvous with Paul Sherringham (Josh O’Connor), the sole-surviving and betrothed son of the Nivens’ friends. Jane and Paul have carried on an affair for years, but now Paul is 11 days out from marrying Emma (Emma D’Arcy), a woman of Paul’s equal social standing. Told through a mosaic of flashbacks and flashforwards, Mothering Sunday sets mismatched love amidst the emotional carnage of post-World War I England.

Mothering Sunday lands as a pastiche of the British greatest hits of doomed romance. A secret couple composed of a wealthy man and a below-his-station young woman? Yes. Grief from the loss of brothers and sons sustained during World War I festering into destructive sorrow? Check. A multi-strand narrative that deploys a novel-writing framing device to jump between time periods from scene to scene? Double check. It adds up to a sense that Swift and then Birchoperate in the shadow of Ian McEwan’s Atonement, and Joe Wright’s film adaptation of the same name. The stories are different enough but with shared broad thematic and narrative touchstones, Mothering Sunday quickly settles into younger sibling mode to a more beloved and, sadly, better executed contemporary. McEwan wasn’t the first to do it, but he remains one of the best, and so Mothering Sunday starts a touch stale.

Thankfully though, Mothering Sunday boasts a murderer’s row of British talent all operating on top marks. As the Nivens, Colman and Firth provide a poignant counter-couple to Young and O’Connor. They lost their sons to the war and their divergent approaches to that grief reveal a splintered marriage. Firth plays Godfrey rich with yearning, a man desperate for tenderness who also aches to be fatherly, conveyed through a series of awkward but well-meaning interactions with Jane. For her part, Colman carries Clarrie on as a hardly restrained raw nerve, bursting with sighs and snaps until her anguish eats her up. Colman’s role makes for a rich pairing with her work in The Lost Daughter (2021), proving once again that no matter the size of the role, she is captivating. Together, Firth and Colman suggest an eon of shared history through glances, curt exchanges, and numb dinner parties.

Of course, a counter-couple only works if the primary couple delivers a passion worth mooning after. Young and O’Connor sculpt easy chemistry that bristles with heat. O’Connor gets to step into a variation on his turn as Charles in The Crown (2016-) right down to the love triangle. Yet, whereas Charles was defined by a restrictive pompousness, Paul offers O’Connor a chance to play. The man is marred by his brothers’ deaths but still shimmers with hopefulness for a life beyond all that. He is breathlessly charming, and the little smile he manages with a curl of his lips is utter sensuality. Even so, Young is the film’s standout, matching every inch of O’Connor’s turn and then well surpassing it. Jane is the lynchpin of every strand. It is her life and how she reckons with compounding loss that provides Mothering Sunday any story engine at all. Young masters the code-switching inherent in Jane’s existence. Her facial control and attunement to her body enable an array of ticks and variations on vocal tone and touch to match the given scenario. It is truly inspired work.

The shame though is that Mothering Sunday undercuts Young and her colleagues with its commitment to so many storylines. Whenever one thread picks up pace and starts to crackle, we lose it to exposition or mismatched tension in another one. For all of Husson’s extensive talents with a camera, a swathe of striking aesthetic choices and stellar performances result in a film that feels surprisingly cold. Husson’s knack for toying with focus and refracting her cast through a stream of well-placed mirrors and other reflective surfaces is beautiful to behold, but much like the narrative underneath, it grows stale and heavy-handed the longer we remain beholden to it. Like its pastiche-laden story, Mothering Sunday’s visual language unfurls a number of lovely components but assembles them into a whole far less compelling than the discrete portions that make it up.