As a result of its simplicity and betting market value, the NFL is USA’s biggest American football league.. In fact, its final, otherwise known as the Super Bowl, is the world’s most-watched sporting event. By virtue of being the biggest show in sport, bettors are increasingly interested in trying their luck in the show. For a list of the legal sports betting sites in the US, access the free reviews published by OLBG.com

America Football (or NFL) takes place every autumn and winter. Games that are usually slated for Thursday, Saturday, and Monday tend to start at odd hours, especially for UK fans. However, Sunday games usually kick start around 6 pm and 9 pm UK time, making it a good moment to end the weekend. With the games serving as prime targets for sports betting, you can wager a bet on a variety of features as the NFL has different betting options both before and during the game.

To this end, there are a variety of bet types, viz-a-viz moneyline, total points, and handicap (spread) markets. The aim of this piece is to address the seeming intricacies of NFL betting. For more information about the NFL, check out the official website.

NFL spread betting is the most popular bet type due to its simplicity. It entails a game where there is a favored team with an underdog. Usually, the number of points is set by the sportsbook. The bettor then determines whether the favorite game will win by a number that is higher or lower than the set points. The first scenario is regarded as covering the spread. If you bet on the underdog to win, the selected team must either win the game outrightly or lose with points that are fewer than the spread. In this case, the bettor will be regarded to have beaten the spread.

Here is an example:

Here, the oddsmakers have allotted 10 points to the New York Giants over the Green Bay Packers. The implication of the (-) sign beside the spread amount is that 10 points have been taken away from the team while the (+) sign suggests the underdog team as 10 points have been basically added to the team’s score.

For a wager on Green Bay Packers to payout, the team has to win by more than 10 points while New York Giants will have to lose by points fewer than 10 for a wager on the team to payout. If the latter also wins the game outright and you wager a bet on the team, you will get your payout. 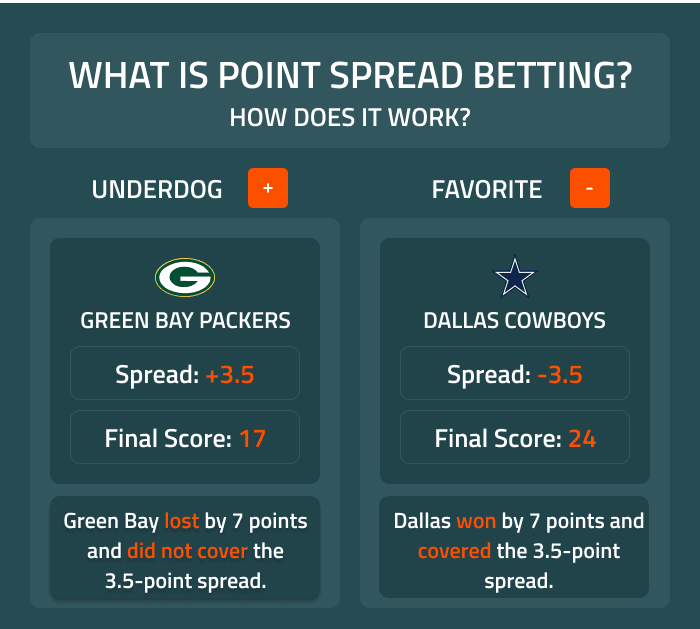 Betting on the totals involves predicting more or fewer points than the published line by the sportsbook rather than the winning team. The focus is the overall points scored. It is common to often refer to this type of bet as “over-under betting.”

Money line betting is a straightforward bet. It is a bet on the team that will win the game. It differs from both point spread and totals. This is because the odds, which determine the potential payout and the implied probability of the sportsbooks, change.  An example is indicated here:

In contrast to the other two markets or bet types, the number here means an entirely different thing. A bettor that backs the Packers will need to stake $300 to win only $100. However, supporting the Giants with $100 will win the bettor $250. The payout suggests that the favorite is the Green Bay Packers team. One key factor of money line bets is its offering of a poor return on investment.

It is important to note that point spread, totals, and money line bets are usually expressed in relation to $100 bet sizes. However, this does not imply that you have to wager the amount – you can wager at a lesser or higher amount. In this case, the payout is calculated using the pro-rata formula. In other words, if you wager $20 on a particular team, you will be paid $50.

Many bettors, in a bid to increase their potential payouts, often wager bets by combining spread, money line, and totals. This is known as parlays. A bettor who plays parlay will win only if all individual plays hit. Similarly, teaser betting includes all bets against the spread or total. In this case, the bettor forfeits a potential payout in exchange for more favorable spreads.

For instance, in a proposed line o -13 with a 6-point teaser, the new line would be -7. Even though a teaser might lessen the risks involved in the parlay, each individual play still has to be hit while the payout gets reduced significantly. Some sportsbooks may allow you up to 15 times per parlay.

Just as the name implies, they are wagers placed on an event that is yet to occur. Most of the futures bets are based on the winner of the Superbowl. This is one of the reasons why the Team Odds are released in less than a week after the past year’s championship. This means that you can select the franchise to hoist the Lombardi Trophy even before the teams playing get their acts together.

Before wagering NFL betting, it is important that you keep off from media hypes as they could be tricky. Rather than follow them, utilize the large volume of data available on the internet to find winning bets.