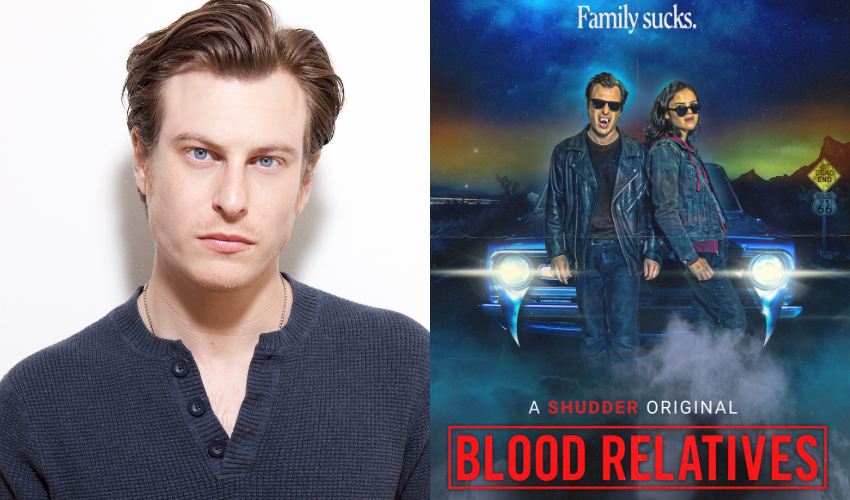 When the Zoom screen opened up, Noah Segan, the writer/director/star of Blood Relatives (2022) sat in his garage with a 1969 Barracuda Fastback, his car from the film, gleaming behind him. Blood Relatives marks Segan’s feature directorial debut after overseeing a section of the anthology film Scare Package (2019). Arguably best known for his many collaborations with Rian Johnson, including the upcoming Glass Onion: A Knives Out Mystery (2022), Segan effortlessly slips into triple duty here.

Blood Relatives follows Segan’s character Francis, a loner Jewish vampire who crisscrosses the American south looking for bad people he can suck dry. That relatively simple existence is blown up when Jane (Victoria Moroles) barrels into his life. Who is she? A 15-year-old daughter that Francis knew nothing about. Jane tracked Francis down because she wants to understand what exactly she is, something she began questioning after discovering an urge to eat raw meat and suck blood from the occasional raccoon. With Jane’s mother recently dead, Francis is her only family left. Francis wants to get rid of her to carry on his life as is. Jane won’t go without putting up a fight. The two embark on a fateful road trip full of bloodsucking escapades and more than a dose of self-discovery.

Segan dropped by to chat about Blood Relatives and all of the strands that fed into making the project a reality. The following is our conversation, edited lightly for length and clarity.

(Devin) I love having the Barracuda in the background, just an A-plus set-up.

(Noah) What can I say, the star of the film ladies and gentlemen. Along with my kid’s soccer ball and the guitar I never play.

Let’s talk vampires. Before Blood Relatives, what was your relationship to vampire stories? What’s kind of your personal history with them?

I can’t say that I have a personal history with vampires. Although I have worked in Hollywood for a very long time. So make of that, what you will. But, vampires have always been my favorite monster. I’ve always been attracted, I think, to the vampire aesthetic. I love staying up late. I love the kind of cool, sort of empowered vibe that a vampire gives off. As I grew older and I started to think past just aesthetics, I started thinking about what mortality is. Sort of, how we face that. Whether we’re part of regular society, or we’re just faking it. That’s all part of the vampire genre so it became a place I wanted to play.

Were there any specific vampires or stories, movies or otherwise, that really gave you some inspiration when you were working on the Blood Relatives script?

You know, I watched a lot of Ganja & Hess to prepare for this guy. It’s probably been my favorite vampire movie for a very long time, specifically because not only does it have this sort of amazing 70s American New Wave aesthetic, but it also movie on otherness. It’s a commentary on otherness in horror from the Black perspective. That was a really big one. George Romero’s Martin was also a big one because it’s very much about an outcast vampire rooted to a time and a place. It also leaves a lot of questions open. It doesn’t feel like it has to answer all of the vampire questions. On the level of more, I would say, popular vampire movies, Near Dark was massive in terms of inspiration.

I was wondering about Near Dark what with your character’s leather jacket and sunglasses. Felt like some real Bill Paxton channeling.

Yeah, I mean, you know, you’ve gotta steal from the best man.

Circling back, I’m glad you bring up the idea of otherness. I was fascinated by how you made Judaism such a big part of Blood Relatives. There’s such a fraught history between the Jewish people and vampirism in folklore and terrible propaganda. Was that something you were actively wanting remix and take on?

Yes, and I appreciate you asking about that. You know, as I went beyond the first draft of the script, I started thinking about vampirism, family, and how they mixed. Of course, it became personal. I thought about myself, where I’m from, and who I am. I am not by any means a pious Jew or an authority on Judaism. I’m a fifth-generation assimilated New York Jew, which has its own culture. But I very much still feel Jewish and decided that if I was going to tell a story about family, I should include that. And, it just so happens that there is this millennia-old relationship between vampirism and Judaism, whether it’s blood libel or, as we talk about in the movie, the occult side of Nazism and how that was one of many atrocities committed. It all kind of felt like it had a place.

One of the most striking things for me is how you juxtapose the tragic loss of life in the Holocaust with the immortality that Francis faces. What was it like to write those gigantic life and death issues into this story?

It was difficult. On one end, it’s a big part of people’s lives who come from communities and ethnicities that have experienced genocide to sort of say never forget. I mean, this idea that we have to acknowledge the tragedy and make it real, especially for something like the Holocaust when we still have people that try to deny the truth of the Holocaust.

But how do you do it? in a personal way, without feeling like you’re taking advantage of the bigger picture? And I think the answer in the movie, whether it’s the right answer or the wrong answer, was just to sort of say it. To say, this thing happened, and it’s real, and I am a person who is connected to it. In a lot of ways, I think I sort of tried to make those moments as natural and simple as possible, because they also felt the scariest. This is a horror movie that doesn’t have a lot of kind of big horror movie scares. But you know what the scariest thing in the fucking world is? Genocide. Hopefully, it’s enough to kind of propel our story forward.

There’s truly nothing scarier, and that inclusion makes the fact that Blood Relatives is also quite funny a minor miracle. I imagine that balance is difficult to strike. What was your approach to threading comedy through the various horrors in the film?

I really was just about kind of trying to always ask whether those things could be true at once. Jews have a long history of making fun of their tragedies. A lot of marginalized people tend to do that. It’s a way to regain our power, right? A way that we can sort of own the thing that people use against us. Every time I found a joke, it felt like I was kind of finding a win for the horror movie side by making people laugh. I felt like they had to exist at the same time, and that was okay.

A significant part of that balance is your on-screen dynamic with Victoria and the father-daughter dynamic that you two enliven. How did the two of you build out that central relationship?

Well, I think Vic identified the thing that I don’t know I could have articulated before we finished the film. As a person, she’s a full-on adult, but she’s playing this 15-year-old. She pointed out to me that Jane is really the 15-year-old we all wish that we could have been, right? If you could go back in time and talk to your punk, jerk, teen self, what would you say? How would you want them to be? How would you want them to react to you? Vic kind of put all of that into the Jane character.

Also, when we got into the editing bay, I realized, holy cow, she’s also doing an impression of me half the time. It’s a testament to her amazing mechanisms and talents and skills where she could do all this prep but then let the work show her the answer. You just think you’re having fun on set until you’re in the edit and you’re like, we actually made the movie. We wanted to make that fun. Hope we get to give that to people.

This is the first feature film you’ve directed. Do you feel like you have any major takeaways that you think you learned and will bring into your next project?

I was really, really lucky to have a cast and a crew who believed in the script and believed in me. They were incredibly supportive during preparation and especially during shooting. I think the big thing is that if you are lucky enough to get to a point where people read a script that you wrote or have, and they say we’re willing to put our talents and energies into this, you just have to try to keep them comfortable and happy.

That’s really what a director’s job is. To put people in a position where they feel like they can do what they want to do at their best level. Every time I was able to sort of channel the great directors I’ve worked with, especially Rian Johnson, and make people feel excited about the day and what was to come I felt like I was doing my job. I failed often, but there were times when I succeeded and that’s what I want to keep fostering.