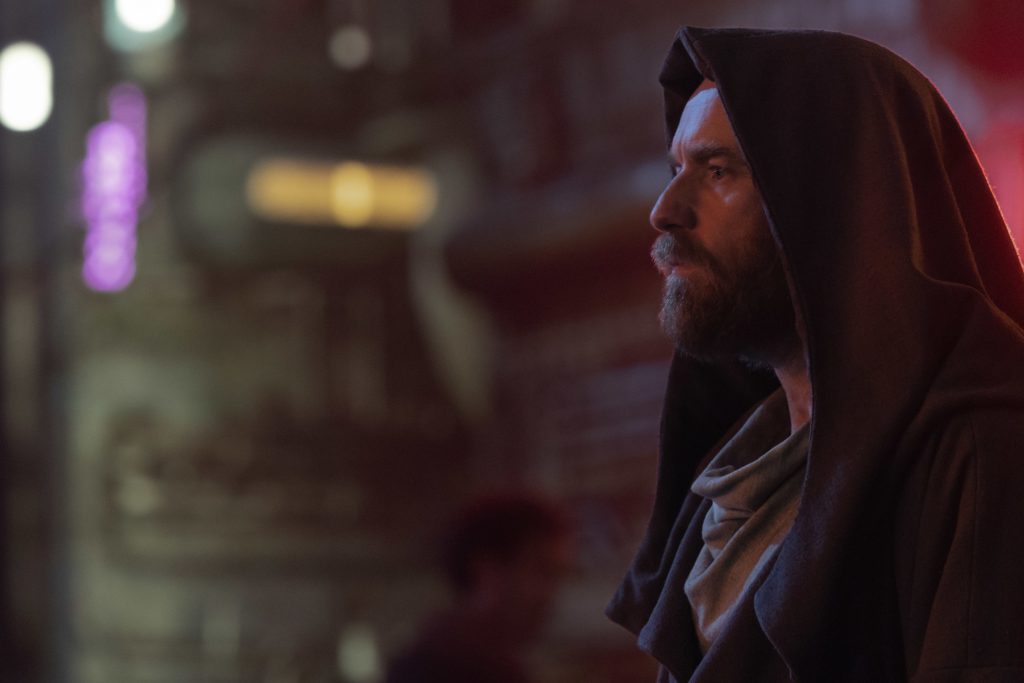 It’s been 17 years since Revenge of the Sith brought the Star Wars prequel trilogy to an end. And ever since, fans have been longing for more. For an Obi-Wan Kenobi story set during those 19 years between Revenge of the Sith and A New Hope. And now, it’s finally here. Directed by Deborah Chow, Obi-Wan Kenobi explores this previously unknown period in Obi-Wan’s life. How does he go from a general in the Clone Wars in Revenge of the Sith to that mysterious old man we see in A New Hope? These first two episodes start to answer that question, presenting us with a Kenobi that’s both familiar and startlingly different. And if they’re anything to go by, Star Wars fans might just be in for quite a treat when all is said and done.

Major spoilers for the first two episodes of Obi-Wan Kenobi follow. Read ahead at your own risk.

Ten years after the end of Revenge of the Sith, Obi-Wan Kenobi hides in exile on Tatooine. A shell of the man he used to be, keeping an eye on Luke Skywalker from a distance, earning a modest living in a factory. At night, past mistakes haunt his dreams, filling him with regrets. If all of this sounds a bit familiar, you’re not mistaken. As Obi-Wan Kenobi begins, we find Obi-Wan in a similar mindset to Luke’s in The Last Jedi – a man so haunted by his past that he’s afraid to keep living. Here, that idea is executed far better, though. Almost immediately, you can feel Obi-Wan’s despair. Startling, considering how poised and put together he often seemed in the prequels, and will later seem in A New Hope.

This is a man lost, unsure of who he is but knowing who he doesn’t want to be. And Ewan McGregor plays it beautifully, imbuing Obi-Wan with this haunting melancholy. You can occasionally see glimmers of the Jedi we once knew. But he’s different now, less sure of himself, less focused. He has a mission, though – to protect Luke Skywalker at all costs. But that’s proving a bit hard to do at the moment considering Luke’s uncle, Owen, wants nothing to do with him, fearing Obi-Wan will ruin Luke the way he ruined Anakin. These jabs feel brutal when delivered so ruthlessly by Joel Edgerton, but there’s a level of truth to them. And Obi-Wan knows it. Overall, what better place to begin Obi-Wan’s story than here?

Inquisitors on the Hunt

There’s trouble brewing on Tatooine, though. The Grand Inquisitor (Rupert Friend) and his lackeys, Reva (Moses Ingram) and the Fifth Brother (Sung Kang), are hunting for Jedi. And their hunt has brought them straight to Obi-Wan’s doorstep. The trio is brutal, initially scaring a saloon full of patrons and later threatening an entire town in exchange for information. But there’s a disorganization to them as well. Reva, obsessed with finding Kenobi after ten long years of looking for him, frequently disobeys the Grand Inquisitor’s orders, acting recklessly and impulsively. What her obsession is with Obi-Wan remains to be seen. But you can tell it’s nothing good. It’s early days still, and neither the Grand Inquisitor nor the Fifth Brother gets much in the way of characterization yet. But Reva seems promising, and I’m curious to see where the show takes her arc.

Fans of the Rebels animated series may have some mixed feelings about the Inquisitors here. On the one hand, the Grand Inquisitor and the Fifth Brother certainly feel like their animated counterparts, and both Friend and Kang bring just the right amount of balance between camp and terror to their performances. But visually, they’re not quite up to snuff. The Grand Inquisitor, especially, continues live-action Star Wars’ trend of coming close to faithfully adapting a beloved animated character to live-action. But much like with The Book of Boba Fett’s translation of Cad Bane, they don’t quite capture the look of the characters. Something is just a little off. Not quite Uncanny Valley, to be sure. But not quite right, either. It’s a small nitpick, though, and quickly forgotten as the show delves deeper into their plans – especially Reva’s.

Elsewhere, Leia Organa (Vivien Lyra Blair) lives a peaceful life on Alderaan with her parents, Bail (Jimmy Smits) and Breha (Simone Kessell). And naturally, Leia has no interest in her royal duties, preferring to run around the woods lost in her own adventures. It’s a stark contrast to the Leia we’re all familiar with – the dedicated politician and leader, the woman who’d lay down her life to save her planet and her people. And her parents don’t quite know what to do with her. Breha, on the one hand, tries to mold her into the kind of princess the people of Alderaan want to see. But Bail, as playful as ever, only encourages Leia’s mischievousness. An encouragement he soon regrets as Vect (Flea), a bounty hunter hired by Reva to draw Obi-Wan out of hiding, kidnaps the young princess and takes her to the seedy world of Daiyu.

So, the Organas turn to Obi-Wan, imploring him to help them find their daughter. After all, she’s just as important as her brother, right? But Obi-Wan hesitates. He’s not the man Bail Organa once knew. He’s not a Jedi anymore, not really. But Bail doesn’t believe that. Sure, Obi-Wan might have failed Anakin. But that doesn’t mean he’ll fail Leia, too. Bail tells Obi-Wan that this is a chance to start over, to try to right some wrongs, to do some good once again. And Obi-Wan acquiesces, digging up his lightsaber from where he buried it in the desert ten years ago, and sets off on an adventure once again.

Obi-Wan was right, though. Time hasn’t been kind to him, as evidenced by just how poorly his rescue of Leia goes. Once arriving on the cyberpunk-themed planet of Daiyu, Obi-Wan stumbles around with nary a plan to be seen – a stark contrast to his normal MO. He ultimately finds Leia, after a brutal fistfight in the back hallway of a drug den, and accidentally alerts Vect (and Reva) of his presence. But things go from bad to worse as Reva puts out a bounty on his head, forcing Obi-Wan on the run as he and Leia try to find a way off of the planet before the Inquisitors close in on them. With the help of a con artist pretending to be a Jedi (Kumail Nanjiani), Obi-Wan and Leia barely escape Reva’s grasp. Though, not before Obi-Wan learns the shocking news of Anakin’s survival.

Reva, on the other hand, has gone a bit too far for the Grand Inquisitor’s tastes as he chastises her for kidnapping a senator’s child. But Reva doesn’t care. She’s got an ax to grind and it’s bad news for whoever gets in her way. Including the Grand Inquisitor himself, who she kills in the episode’s climactic moments. That’s quite the shock, though, as the Grand Inquisitor featured pretty heavily in Rebels‘ first season. But perhaps there’s more to this than meets the eye. There’s definitely more to Reva’s vendetta against Obi-Wan, though, despite what the (late) Grand Inquisitor and the Fifth Brother seem to think. Sure, maybe she’s trying to win favor with Vader. But, as she hints at in the first episode, it feels like she’s after something deeper than that. And hopefully, we’ll find out more about that soon.

The Beginnings of a Friendship

The most interesting part of the second episode is the rapport Obi-Wan and Leia share. Leia initially distrusts him, sensing that he’s hiding something. And it’s her distrust that ultimately leads to Obi-Wan finally reacquainting himself with the Force, having to use it to save her after she jumps off a building trying to run away from him. McGregor and Blair play off of each other wonderfully, and it’s a delight seeing the beginnings of their friendship form here. Their playful ribbing, their support and criticisms of one another. In these moments, it’s easy to see why Leia later reaches out to Obi-Wan for help at the beginning of A New Hope. Future episodes seem destined to build on this relationship even more, which is very exciting. We’ve seen how Obi-Wan acts with Luke, so it’s nice to see him properly connect with Leia too.

As is often the case with these weekly, serialized shows, it’s hard to judge them on an episode-by-episode basis. So much of their success lies with how well subsequent episodes tie up the loose threads. But based on these first two episodes, Obi-Wan Kenobi is off to a great start. From the slow, confident pacing to McGregor and Ingram’s excellent performances to Deborah Chow’s breathtaking visuals, there’s a lot here to like. I’m always drawn to stories that put our heroes through the wringer, so the idea of following Obi-Wan as he picks himself up from rock bottom and becomes the Jedi he once was is an immediate hook. And the show seems to know this, too, reveling in all the ways it can mine that very storyline.

There’s a lot to look forward to still, including the return of Hayden Christensen as Anakin Skywalker – as teased in the final moments of Part II. But for now, these first episodes show a lot of promise. And I’m excited to see where the show goes from here.

The first two episodes of "Obi-Wan Kenobi" offer an enticing glimpse at what's become of the fan-favorite Jedi since we last saw him. Buoyed by some excellent acting from Ewan McGregor and exciting direction from Deborah Chow, these episodes are a promising start to this much-anticipated series.