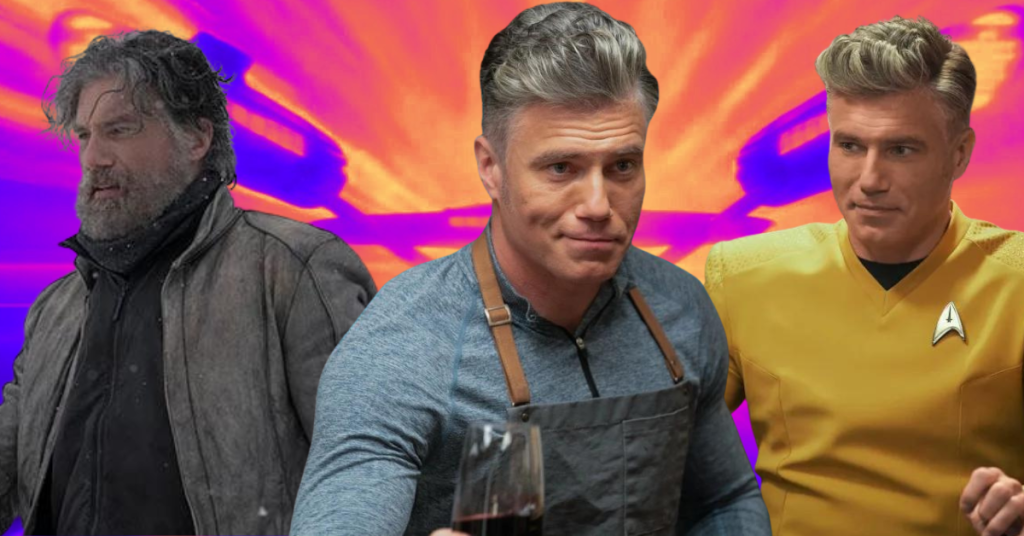 In its opening minutes, Star Trek: Strange New Worlds (2022-) finds Captain Christopher Pike (Anson Mount) tucked away on a snowy ranch. Newly bearded up, Pike’s self-grounded after a recent brush with existential dread. An apocalyptic vision revealed his fate points toward a near-fatal injury seven years in the future. He is paralyzed by the fear that knowing this will change how he approaches his Star Fleet work. That it will make him unable to perform his duties as captain. And so, riding a horse through the snow, he is a vision of the archetypal gunslinger who has hung up the spurs. Yet, just as other washed-up cowboys inevitably realized, the Wild West does not stop for them. For Pike, a rescue mission for a friend translates into a return to form.

It is in that homecoming to the U.S.S. Enterprise that Strange New Worlds begins unlocking a vision of Pike that deconstructs prototypical ideas of masculinity associated with a white, muscular, and classically handsome Star Fleet captain. Pike may start the series as the lonesome rancher but by the end of the eponymous pilot, he’s firmly ensconced as the Enterprise’s primes inter pares. By the end of the episode, he has consistently placed the well-being of his crew, his friends, above all else. He has delivered a rousing speech about the importance of preserving democracy and championing radical empathy as the only true antidote to violence and hatred. Plus, as if that weren’t enough, he has begun the process of grappling with his existential dread by starting to open up to his loved ones. And that’s only the opening salvo.

A thread throughout Strange New Worlds is Pike’s proficiency in the kitchen. In the second episode, titled “Children of the Comet,” we learn of Pike’s traditional crew dinners. The episode may focus on Nyota Uhura’s (Celia Rose Gooding) trepidation about remaining in Star Fleet, but Pike works the pan and the apron in a memorable fashion. Aesthetically, it’s a joy to see this male authority figure don an apron, an article of clothing broadly associated with femininity. Gendering clothing remains an absurd habit, and Strange New Worlds’ comfort with simply dropping Pike into the apron is a lovely touch. Beyond the look, Pike’s penchant for cooking also gets at a central tent of his character; this is a man committed to nourishing his crew. He is not a severe and remote figure. No, this Pike looks after his colleagues, body, and soul.

That ethos percolates out into the crew assembled around Pike. Without turning to self-congratulatory girl-bossing, Strange New Worlds fills the casting coffers with a range of key female characters. First Officer Una Chin-Riley (Rebecca Romijn), Lieutenant La’an Noonien-Singh (Christina Chong), Lieutenant Erica Ortegas (Melissa Navia), and the aforementioned Uhura, among others, are significant figures who serve as protagonists in their own episodes as well as slotting into pivotal supporting roles when others take the lead. They make up a diverse group from personalities to racial identities. Pike has differing relationships with each as one would expect in an ensemble show, but the consistent truth is that he values and turns to his female allies and friends whenever he is in need of personal and professional guidance. Through this, Strange New Worlds makes it clear that mutual respect and trust, regardless of gender identity, must be the baseline.

An extension of that notion exists in Pike’s dynamic with other men. A cornerstone of the original series as well as just about all the movies that have come after is the enemies-to-brothers arc between James Kirk (William Shatner) and Spock (Leonard Nimoy). That sort of contentious bonding, albeit predominantly on Kirk’s part, foregrounds one version of homosociality. Comparatively, Pike and Spock (Ethan Peck) immediately embrace a professional tenderness, at least as tender as you can get with a Vulcan. Episodes “Spock Amok” and the finale “A Quality of Mercy” both foreground the powerful bond the men share. Pike’s commitment to engaging in reflective emotional conversations with Spock, as well as Una in particular, spotlights compassionate masculinity. Pike finds strength not in an attempt to mask doubts and pains, but only by sifting through his thoughts and feelings with his loved ones.

What all of this adds up to is a lynchpin character in the new Star Trek project who champions a vision of healthy masculinity that renounces the toxicity rampant in so many of our actual white, male, power figures. With Pike, the creative forces behind Strange New Worlds have chosen to hold up a culturally advantageous vision of masculinity, resisting the urge all the while to make Pike some untouchable superman. He is flawed, struggles and fights himself, and it makes him beautifully human. He is also plenty fine, or at least the writers are, to take second or third billing so that others can shine. Pieces of this work are clear throughout later Star Trek series such as The Next Generation (1987-1994), and especially in Discovery (2017-), but there is something special about doing so with Pike. This iteration is truly boldly going where none has gone before.