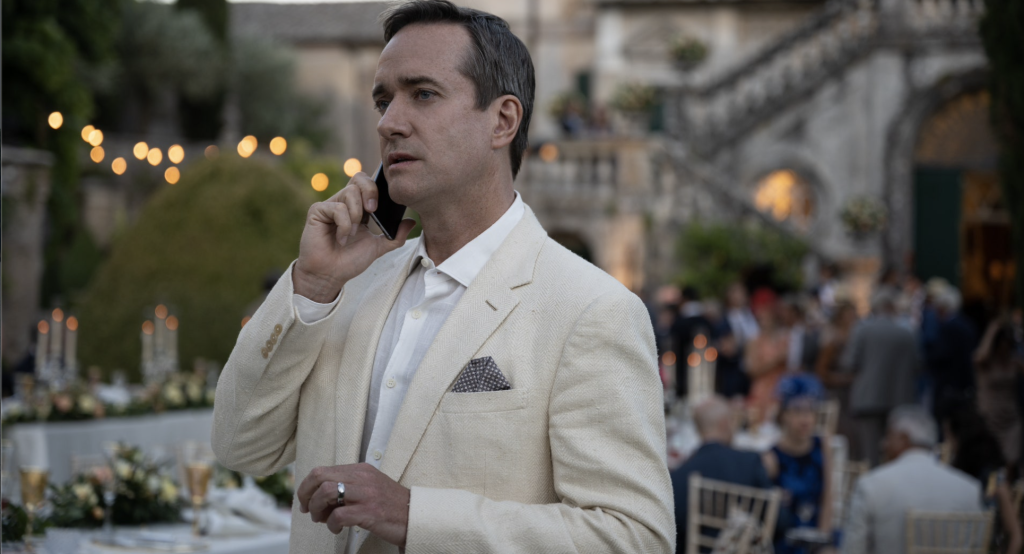 The first time I saw Matthew Macfadyen was, as I presume holds true for many, in Joe Wright’s Pride and Prejudice (2005). Macfadyen portrayed Mr. Darcy across from Kiera Knightley’s Elizabeth Bennet. His performance oscillated gloriously between the necessary clumsiness and romanticism that embodies Darcy in the original Jane Austen text. Macfadyen’s career since that role has capitalized on his proficiency for period work, landing him spots in Frost/Nixon (2008),  Robin Hood (2010), The Three Musketeers (2011), and a Wright-Knightley reunion in Anna Karenina (2012). All of this is to say that when he emerged as a cast member on Succession (2018-), I imagined he would channel much of what made him so charming in his past work. What we in fact ended up with in his performance as Tom Wambsgans is an against-type achievement of brilliant ferocity and aggrieved pathos.

There’s a scene in the seventh episode of season 3 when Tom discovers he will not in fact be going to prison. In the moment of discovery, Macfadyen plays the scene quietly. Tom has been “reading the prison blogs” and eating diner food under the assumption it was only a matter of time, and so we as the audience expected unbridled joy. Macfadyen doesn’t give it to us, that is until he visits his one true friend Greg (Nicholas Braun) in the windowless office Tom banished him to a few episodes earlier. Macfadyen strolls in and calmly tells Greg to “scooch over for a minute” before flipping Greg’s desk with gusto, and then leaping onto the top of a filing cabinet to beat his chest and scream. It is the ultimate cathartic release, and Macfadyen delivers it with astounding verve. Paired up, the quiet discovery and chaotic release also encapsulate what defines Macfadyen’s continued brilliance; he keeps Tom restrained so much that when his true and unbridled emotions break through they are the most electric thing Succession can deliver.

Over three seasons, Macfadyen has built Tom into a man defined in equal parts by his desperate need for love and withering self-hatred. His wife Shiv (Sarah Snook) has discarded his affection at almost every possible turn, even on their wedding night, when she decided to tell him that she may not be built for monogamy after they said their vows. He is the Roy family punching bag, an honor he passes downward to Greg, which in turn results in a dynamic as twisted as it is occasionally truly tender. His self-hatred manifested throughout season 3 as comfort when he believed he would become the sacrificial lamb offered up to the Department of Justice, a “Christmas tree” for all to hang their misdeeds on while only Tom would serve jail time. And so, while we all waited breathlessly to see if Kendall’s (Jeremy Strong) coup would pan out, or if indeed was dead in a swimming pool, Tom stunned us all with his finale heel-turn. Or, rather, delivered on the buried lede the show has hinted at since the end of season 2.

Macfadyen said the quiet part loudly this season when he told Kendall “I’ve seen you get fucked a lot. And I’ve never seen Logan get fucked once.” Since the pilot, Succession has foregrounded the Roy siblings’ battles with their father Logan (Brian Cox) and each other for control of Waystar Royco. As a result, both we as audience members and the characters saw Tom and his delectably deranged friendship with Greg as an exuberant but probably unimportant sideshow. Tom has climbed to run news network ATN yes, but Shiv’s continued distancing and, well, disappointment at learning her husband wasn’t going to prison suggested Tom may have been staring down excommunication from the Roy dynasty. But there was always the parallel narrative where Tom managed to ingratiate himself with Logan, the only one who never got “fucked.” Tom’s promise to take the fall never resulted in jail time, but Logan made sure to tell Tom he “wouldn’t forget” the gesture. The only thing Logan loves more than unimaginable wealth and power is complete fealty, and Tom delivers on that note in a way the Roy children never did.

And so, in the season 3 finale when it seems the Roy children have finally banded together to take down their father through a contingency of a divorce settlement, Tom outplays them all. As Shiv wonders aloud “who told [Logan]” they were coming, Tom enters the frame. Logan puts a warm hand on Tom’s shoulder as Logan leaves his shellshocked children, and we learn with Shiv that her husband has gutted her and her brothers. Dressed like Al Pacino in The Godfather Part II (1974) with the gray/off-white jacket, white shirt, and handkerchief, Tom has made his move against the family.

I did in fact jump out of my chair, scream, and throw a pillow at seeing this, but in retrospect, it was only too clear. It was only an episode before that Shiv outright told Tom “I don’t love you,” and though she tried to pass it off as a bit of foreplay negging, the heartbreak in Macfadyen’s face was unmistakable. Lady Caroline (Harriet Walter) may have been referring to her ex-husband Logan when she told Shiv “He never saw anything he wouldn’t want to kick it just to see if it would come back,” but the sentiment holds true for the way Shiv has treated Tom since we met the characters in the pilot. The difference between Tom and the Roy children though is that he finally had enough of the kicking and decided to kick back.

While so much praise is owed to showrunner Jesse Armstrong and the entire behind-the-camera creative team in terms of sculpting Tom into who he is, Macfadyen’s work is the final spark that turns Tom into a real boy. In a show where so many characters are stuck in their perpetual loops of pursuing power only to be kicked back down, Macfadyen makes Tom’s arc from perpetually spurned husband to kingmaker utterly believable. What does this mean for where Tom goes in season 4? It’s hard to say precisely, but I feel confident in at least this declaration; Logan Roy has a new “number one boy,” and his name is Wambsgans.