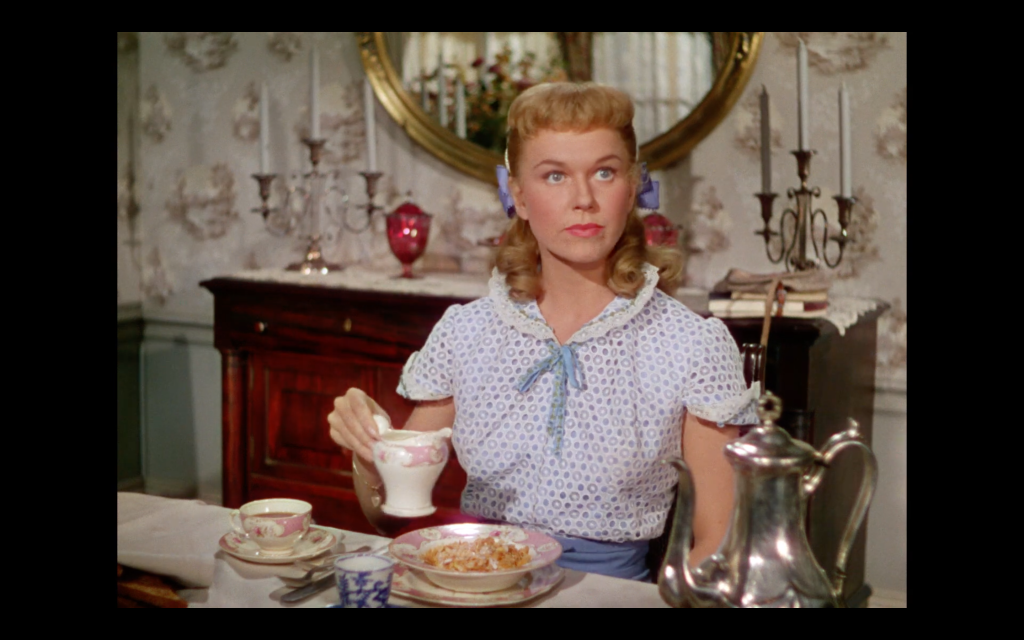 While there was never a guarantee back in the day that any particular musical was going to resonate with the general public, you could usually count on audiences to follow their favorite performers from picture to picture. There were many talented men and women who made their mark in the world of musicals, but in the 1950s it was hard to top the effortless charm of Doris Day. During this time, especially, the number of narrative features she performed in from year to year was simply dizzying. We recently covered the really sly and energetic The Pajama Game with Day from 1957, but we have to head back about a half-decade to 1951 to witness one of her throwback musicals from Roy Del Ruth (It Happened on 5th Avenue). On Moonlight Bay finds Day reuniting with frequent collaborator Gordon MacRae in a project that was loosely based on the Penrod stories by Booth Tarkington. This tale finds Day returning the simpler time of 1917 America that yields mixed results creatively.

The Winfield family has just relocated a couple of blocks over from their old, cozy house to a nicer neighborhood with a much more spacious house, and no one is really thrilled about it. The banker patriarch of the family, George (Leon Ames, Meet Me In St. Louis), thinks it will be a much more appropriate place to raise their family, but everyone else has their own particular issues with it. His wife, Alice (Rosemary DeCamp, Yankee Doodle Dandy), thinks the house is simply too big and isolating, while their incorrigible young son, Wesley (Billy Gray), is mad he had to leave his friends. Even their put-upon housekeeper Stella (Mary Wickes) is plagued by the swinging doors of the house that keep knocking plates of food out of her hands – a hilarious running gag throughout the film. George also believe the move might be a good step towards making his older tomboyish daughter Marjorie (Doris Day) more ladylike where she can secure a husband, but it is an over-the-top example of un-ladylike behavior that puts her in the path of their new neighbor, William Sherman (Gordon MacRae), an oddball of a college student on break from university. 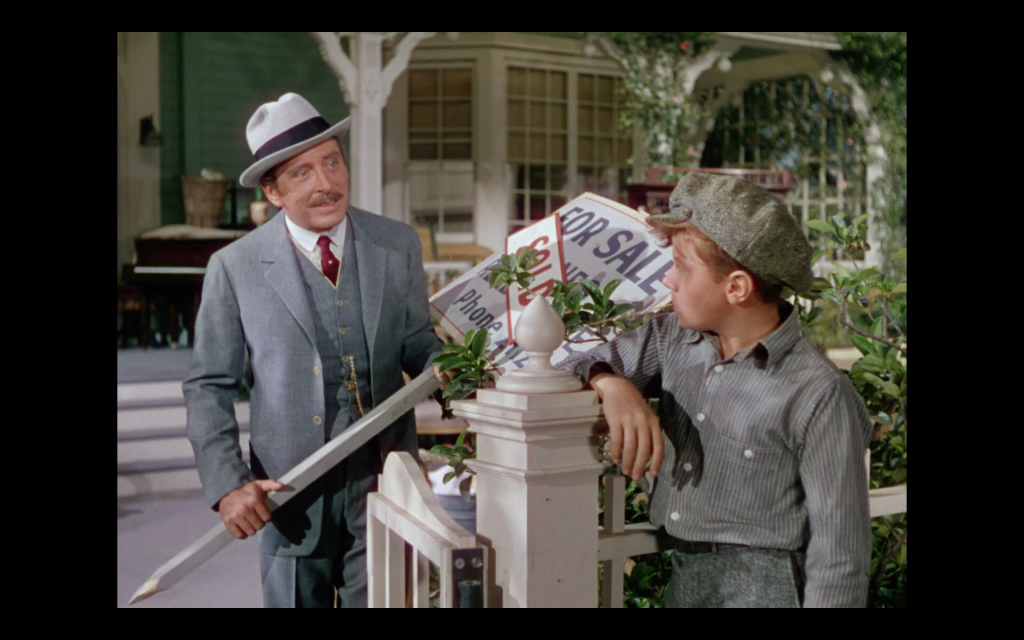 The attraction between the two is instant, and the film does not do much to dispel the idea that it is inevitable that they will end up together. Doris Day brings her signature cheer and vigor to this role that oscillates between plucky go-getter and standard-issue ambitionless girl that was particularly common at this time. The film is depicting an early twentieth century America where marriage was seen as the only goal for a woman to achieve, but the attitudes of the 50s were not wildly more progressive. Gender politics of the narrative aside, the romance between the two young lovers is agreeable enough, if not a bit on the uninspired side due to the middling chemistry between the performers. Yet, when you hear these two croon songs such as “Cuddle Up a Little Closer” or “Tell Me,” you are grateful that these two were placed in the roles. Most of the songs in the film are more low-key and melancholy in nature than a lot of the splashier musicals, but they hit a bit more in the emotion department.

The other element of the movie that only works in fits and spurts is the mischievous antics of Wesley, who comes off as a bargain-basement version of Dennis the Menace. Much of the film has him pulling pranks, telling lies and all manner of other activities that devil-children can get into, which often does not translate into the laughter for which the film seems to be striving. You often want to wring his neck yourself, but even Wesley proves himself somewhat useful in the end as he realizes some of the errors of his ways, but more importantly he protects his sister from unwanted suitors. On Moonlight Bay is an old-fashioned movie about an even more old-fashioned time of life. The conflicts that are presented are as quaint as someone not having the traditional view of marriage and whether or not a woman can be provided for by her husband. The movie has an antiquated set of ideals, but you cannot fault it for staying within the normal parameters of the time. The performers are all doing a fine job, and the movie is pleasant in the way that old movies are even when you do not agree with the core ideals. 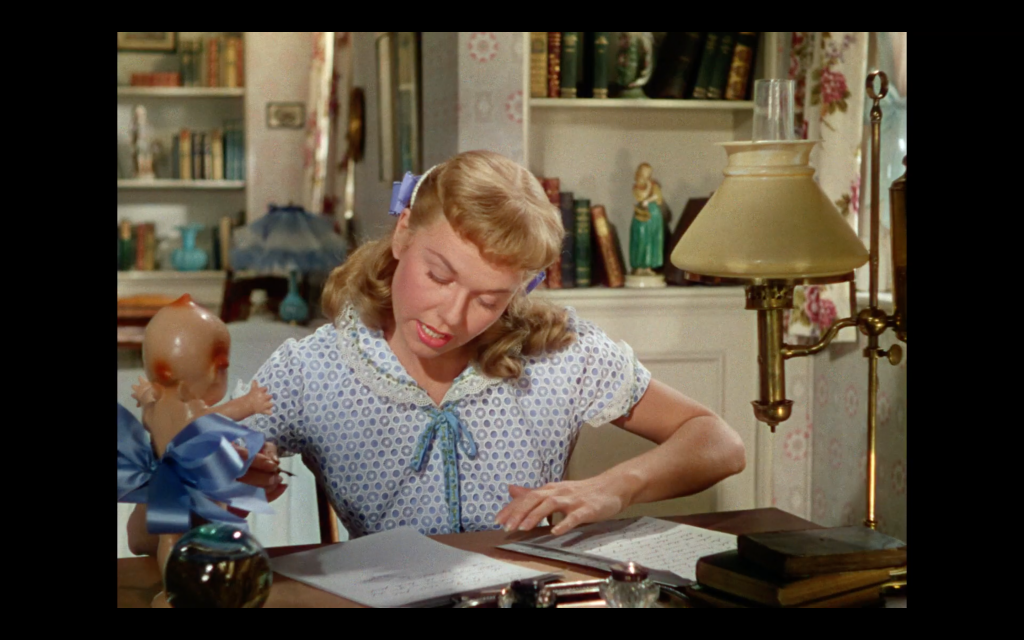 Warner Archive presents On Moonlight Bay with a splendid new 1080p master transfer sourced from a 4K scan of the original Technicolor negatives. Warner Archive has been on a hot streak of delivering eye-popping Technicolor films to Blu-Ray, and we are not mad about it. The film appears to be entirely free of dirt and damage, which gives this feature an additional timeless quality about it. The level of detail and clarity is stunning with the appropriate amount of natural film grain intact. The film features some fabulous colors within the costumes and settings that pop off the screen with an immense vibrancy. The black levels are incredibly deep with an impressive stability throughout. There does not appear to be any jarring digital anomalies such as compression artifacts, banding or any other such issues. This presentation garners top marks for Warner Archive.

Warner Archive has delivered via DTS-HD 2.0 Master Audio presentation that is simply wonderful. While music is the driving force of the film, normal dialogue comes through clearly from beginning to end. When it does come to the music, the track is in rare form with its handling of the different core elements. The track balances vocals with the environmental sounds with magnificent clarity. There are no standout moments where the track ever appears as if it will fail to maintain its fidelity. Warner Archive has provided an A+ audio presentation that does not exhibit any glaring signs of age-related wear-and-tear. The disc also comes with optional English (SDH) subtitles. 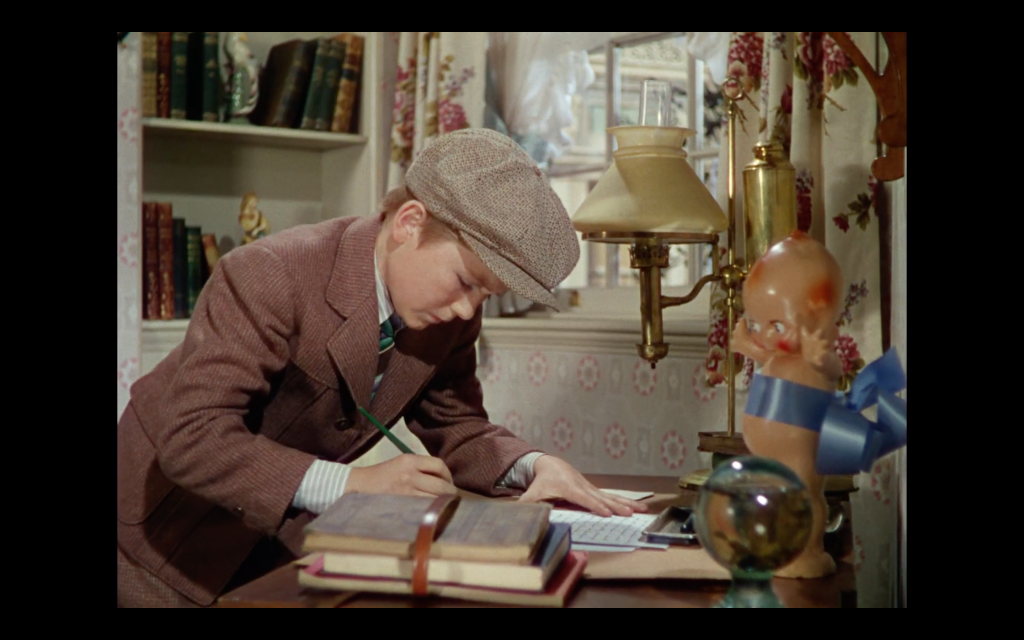 On Moonlight Bay is a mostly harmless throwback musical that is buoyed by the always-charming Doris Day and a pleasant assortment of songs. There are some themes that do not play as well with modern notions of a woman’s value in society, but it is in line with the period being depicted and the time it was released. Setting aside these antiquated ideas, this film functions as an idealized version of pre-World War America that can be a quaint, enjoyable cinematic detour. Warner Archive has released a Blu-Ray with a pretty spectacular A/V quality and a couple of fun supplemental additions. Fans of the movie could not ask for better.

On Moonlight Bay can be purchased directly through Warner Archive or various other online retailers.