‘Once Were Brothers: Robbie Robertson and The Band’ Blu-Ray Review – Essential Music Doc 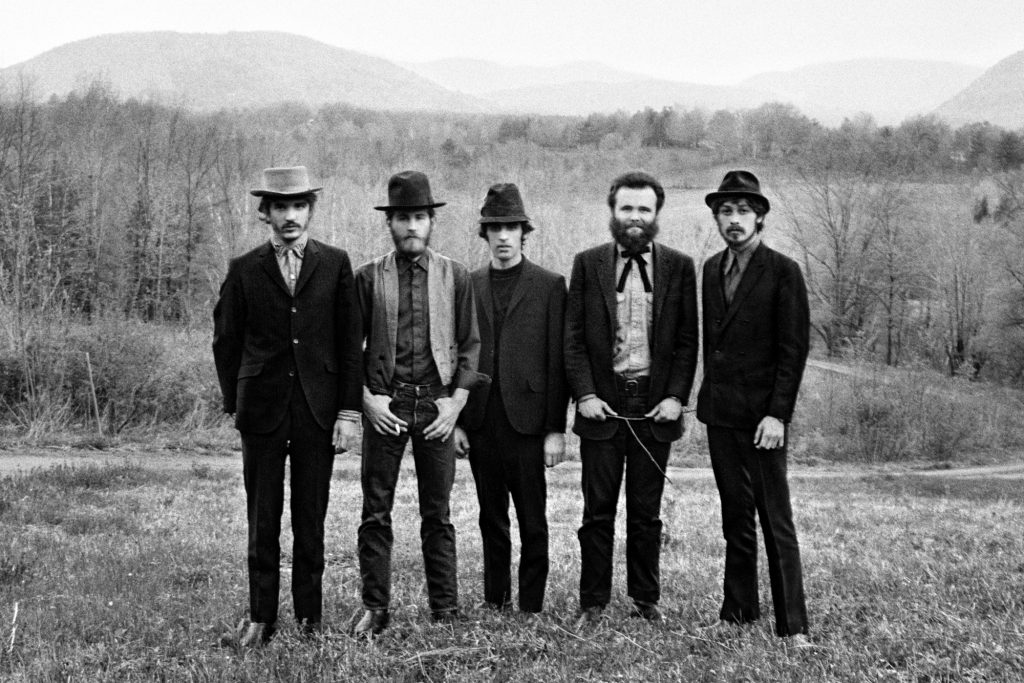 For those who have a solid understanding of rock ‘n’ roll history, few could argue that The Band were hugely influential to the genre as we know it today. Songs such “The Weight” and “The Night They Drove Old Dixie Down” sound so simple, but they sonically transport you to a different time that is truly special. From their iconic debut album Music From The Big Pink to their final onstage performance together captured by Martin Scorsese in The Last Waltz, The Band had an original sound that inspired the likes of Eric Clapton, The Grateful Dead, George Harrison, Elvis Costello and more. Original members Richard Manuel, Levon Helm, Robbie Robertson, Rick Danko, and Garth Hudson had a solid decade of hit albums and critical acclaim before it all came crashing down. Once Were Brothers: Robbie Robertson and The Band comes from Brian Grazer and Ron Howard’s Imagine Entertainment and tells their story through the recollection of Roberts.

The film is a pleasing mixture of modern day talking head interviews and archival footage that truly transports you back in time. Roberts takes you back to his initial foray into music as a teenager, which led to him joining rockabilly outfit Ronnie Hawkins and The Hawks where he met Levon Helm. Between a modern day Ronnie Hawkin and Robertson, there are a lot of colorful anecdotes that showcase the rowdy, exciting lifestyle of live music. It is during this time Robertson and Helm round out what was eventually to become The Band after they separated with Hawkins. Following this departure, the group became friends with Bob Dylan and became his backing band during the period where he went electric. This was such a fascinating time of transition for rock music and the stories of crowd reactions are priceless. As this is focused on Robertson, this period of time is also notable for being when he met his future wife, Dominique. She provides modern day interviews that give an interesting perspective to this time and in later years as The Band. 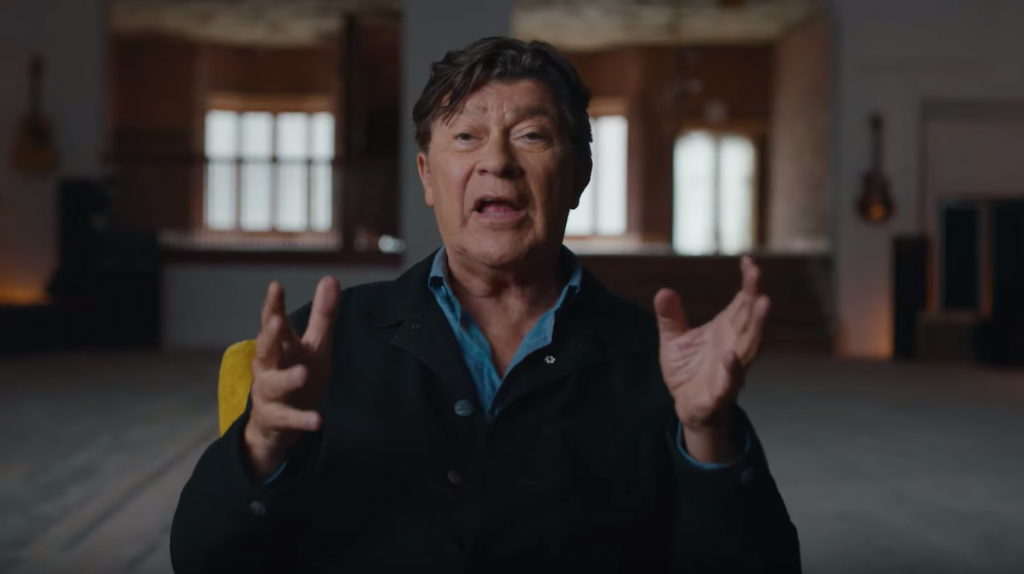 The second half of the movie is where it gets into the meat of the story of The Band recording their landmark debut album and their decade run of wild success. New interviews with such legends as Bruce Springsteen, Eric Clapton, Van Morrison, Taj Mahal along with archival footage of George Harrison and more helps the audience understand what was so revolutionary about their style. Unfortunately, as with many rock ‘n’ roll stories, certain members of The Band indulged too much in the lifestyle that comes with such success. Footage of mangled cars from drunk driving accidents and personal accounts of near-death experiences and addiction are truly chilling. Your heart breaks for what might have been for these guys and the world of music in general if circumstances would have been different. The movie culminates with the staging of their final concert documented in the Martin Scorsese film The Last Waltz. Scorsese discusses what went into pulling off the film and how magical that night was for everyone. Watching as all of their friends such as Eric Clapton, Joni Mitchell, Van Morrison and more join them to say goodbye is transcendent.

This documentary is an excellent gateway for those who do not have a deep knowledge of The Band. Those who are die hard fans are likely to be a bit frustrated by not having a wealth of new information, but, if you understand that this is just one member’s account, this is an immensely entertaining experience. The film chronicles The Band in its original form without tackling what everyone did post-The Last Waltz. The only disappointment is that Garth Hudson, the only other remaining member of The Band, was not interviewed to give another perspective. The Band did not end on the best terms due to struggles with addiction and disagreements about royalties, but their musical legacy remains one that stands as a highpoint in rock ‘n’ roll music. 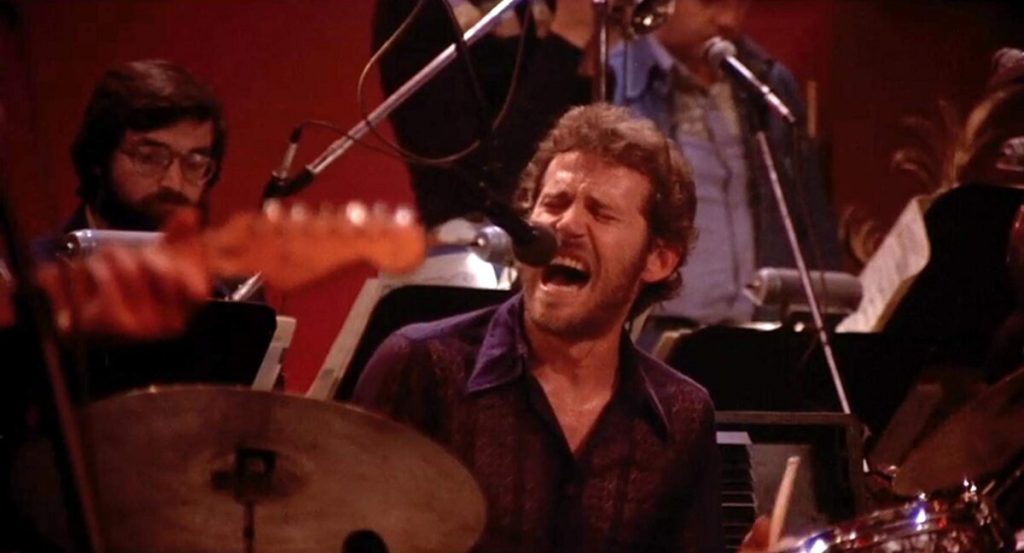 Magnolia Home Entertainment brings Once Were Brothers: Robbie Robertson and The Band to Blu-Ray with a stellar 1080p transfer. Due to the nature of documentaries such as this, the quality of the source material can vary from piece to piece, but the presentation never suffers because of this. Skin tones are all rendered naturally and the modern day interviews look crystal clear. Archival footage has some instances of print damage, but for the most part is very impressive. Colors are rich and vibrant and black levels are free from any digital anomalies. This is a high-quality production and this Blu-Ray shows it off perfectly.

This Blu-Ray release comes with a DTS-HD Master Audio 5.1 track that is wonderful. For a film such as this one, the audio has to be top-notch, and this does not disappoint in any way. The film often has interviews occurring with cuts of pop music lingering in the background. This track balances everything appropriately so the subject of the interview is never overshadowed by the music. The front channels are dominated by speech and the surrounds pick up more of the music. The result is a track that allows this excellent music to consume you in the best way. The final performance of “The Night They Drove Old Dixie Down” during The Last Waltz has been something that has stuck with me for days. This track is everything I wanted from the film. Magnolia has also included Optional English (SDH) subtitles during the main feature

There are no special features included on this release.

Once Were Brothers: Robbie Robertson and The Band tells the story of one of America’s most iconic bands through the perspective of a member who lived through it. A definitive documentary on the subject would take a miniseries to tackle, but this is an excellent, personal dive that is immensely satisfying and entertaining. Magnolia Home Entertainment offers up a disc with an excellent A/V presentation. Fans of music documentaries should not hesitate to add this to their collection. Highly Recommended

Once Were Brothers: Robbie Robertson and The Band can currently be purchased on Blu-Ray, DVD or Digital.

Disclaimer: Magnolia Home Entertainment has supplied a copy of this disc free of charge for review purposes. All opinions in this review are the honest reactions of the author.