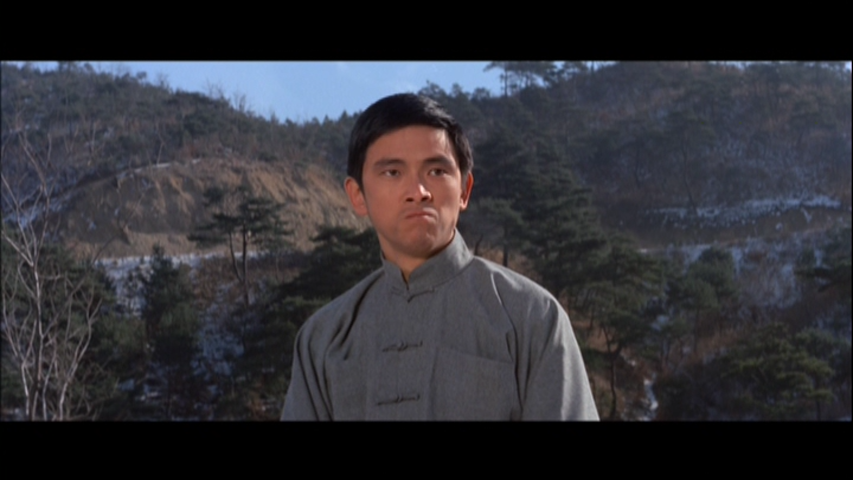 When former Shaw Brothers executive Raymond Chow founded rival studio Golden Harvest in 1970, he quickly teamed up with “Jimmy” Wang Yu – Hong Kong’s first kung fu superstar and formerly Shaw’s biggest box office draw. Bringing over his peerless talent for taking on all foes with one hand tied behind his back, Wang wrote, directed and played the title role in one of his most unmissable kickass classics. From the legendary star of One-Armed Swordsman and The Chinese Boxer comes… One-Armed Boxer! Yu Tian Long (Wang) is the best fighter to come out of his local martial arts school, but when he crosses the ruthless leader of a local crime syndicate, the big boss’ brutal bevy of deadly killers make mincemeat out of the school and everyone inside. Now the only survivor of the massacre, and short of one appendage, Yu is gifted a powerful elixir that promises to give him the strength to take swift revenge on the army of assassins, each representing the most lethal forms of fighting from across the Eastern hemisphere. Proving once and for all that you only need five fingers of death to get the job done, Wang would later reprise his role in the infamous sequel Master of the Flying Guillotine, but it’s the dementedly inventive original where he’s arguably at the height of his powers.

For thoughts on One-Armed Boxer, please check out our discussions on The Video Attic:

One-Armed Boxer comes to Blu-Ray with a 1080p master in its original 2.35:1 aspect ratio restored in 2K from its original film elements by Fortune Star who supplied it to Arrow Video. While we have been receiving a lot of Shaw Brothers content from Arrow lately, this is one of the first releases to dig into the Golden Harvest catalog. This does not quite match any of the Shaw Brothers releases that we have seen, but it nonetheless offers a mostly pleasing experience. This greatest asset this new release offers is consistent color saturation throughout that is suffused with vibrant hues. The ending fight on the mountain really pops off the screen with its bright daytime palette.

While there are elements that could be improved and imperfections readily noticeable, the wear and tear could be considered minimal. Thankfully, the film does not really exhibit any chunky compression artifacts or weird issues with the framing. Some of the darker moments also give way to a small amount of crush. Close ups reveal a great amount of fine detail that allow you to see intricate facets of the production design and costumes. Things get a little less defined in the medium and long shots with some shots looking sharper than others. Some even present as soft or a bit unfocused, which is likely a core issue with the source elements available. Even with some slight imperfections, Arrow Video has delivered something admirable with this latest release.

This Blu-Ray presents the film with a DTS-HD 1.0 Master Audio Mono track in the original Mandarin, including a second Mandarin track with alternate soundtrack, along with an English dub that certain audiences will likely enjoy. Throughout my listening experience, it mostly just seemed like the sound for this feature was not captured very well in the beginning. Dialogue can often struggle to be distinguishable in chaotic environments, but things shape up much more when the number of characters is kept to a minimum. The exaggerated sounds of punching and kicking keep up the tradition of conveying the strength on display. The hard-hitting sound effects do not get muddled and fare well when it comes to maintaining its prominence. The chaotic score mostly maintains a pleasing fidelity, but you cannot overlook some instances of age related wear and tear at the highest amplitudes. This release does  have optional English subtitles provided. While we wish this could sound more distinct and stable, Arrow Video has done what they can with the track. The first pressing of the Arrow Video Blu-Ray of One-Armed Boxer includes a 27-page booklet featuring the essays “Jimmy Wang Yu and the Birth of the Kung Fu Movie” by author David West and “A Farewell To Arms” by film critic Simon Abrams. These works provide a great analysis of the film, performers, behind the scenes details and the genre at large in a thoughtfully written style. The on-disc special features are as follows:

One-Armed Boxer is a tonally wild but generally enjoyable feature that admittedly does not rank among our favorite martial arts pictures. Like many films from this genre, the general plot comes secondary to the gonzo action that plagues this awkwardly-structured narrative. On one hand, brutal action satisfies the basic needs of certain audiences, but many will find the pacing as inconsistent as I do. The oddball humor does keep things rolling with a kineticism that is hard to hate even when some developments seem a bit much. Arrow Video has released a Blu-Ray featuring a passable A/V presentation and an assortment of tremendous features. The film is far from perfect, but it is worth a shot if you are a big fan of seeing people get their butts kicked. Recommended

One-Armed Boxer is currently available to purchase on Blu-Ray.