By now most, if not all of you, have gotten the latest Marvel’s Avengers game developed by Crystal Dynamics and published by Square Enix. I’m not going to talk too much about the game here, but I am going to talk about Ms. Marvel a.k.a. Kamala Khan. What role does she play in this game, and why her?

Well to put it simply – people all over the world love her! Her books are a joy to read and she’s extremely relatable. The version of Kamala that you see in Marvel’s Avengers has actually appeared in her own comic “All-New Marvel Now Point One”. Which is actually a one-off story that debuted sometime in 2014. The game takes her origin story from the comics and shows people who haven’t read her comics exactly how she got her start and became an Avenger. A winning formula for Marvel has been to make your everyday average Joe that you can relate to and turn their “tragedies” into triumphs, a la Peter Parker.

Keeping up with proper representation, Marvel has had a team behind Kamala that comes from different backgrounds which is how Kamala came into being. Sana Amanat and G. Willow Wilson are the co-creators for Kamala, while Adrian Alphona is the man behind the beautiful artwork.

What Makes Ms. Marvel So Relatable

Just like young Kamala, Sana Amanat is also a Jersey girl herself. Born into a Pakistani family with 3 brothers who were immigrants residing in a predominantly white suburb of New Jersey, where she had trouble fitting in and feeling normal. Just a quick summary of Sana’s career, she studies political science with a focus on the middle east and graduated from Barnard College at Columbia University – here in New York City. Fast forward and she’s now the Director of Character and Content Development at Marvel Comics.  G. Willow Wilson is also from New Jersey – Morris County to be exact(I actually like it there).

Wilson attended Boston University and majored in history. While attending Boston University she started to also study various religions. She converted to Islam when she agreed to teach English in Cairo, Egypt in 2003. Wilson has worked on various comics which include the likes of Superman, Wonder Woman, a five-part mini-series run of comics of Vixen from the Justice League. When Wilson was brought on to co-create Kamala Khan with Amanat, the two went back and forth about the character’s ethnicity. Kamala was almost made to be Somali but the two ended up agreeing on her being Pakistani.

Why Ms. Marvel is So Important

Here’s an interesting hurdle that these women had to overcome from even the higher-ups in house: Vice President of Print and Sales had suggested in an interview with ICv2, Marvel’s sales were doing poorly because of the presence of diversity and female characters.

“What we heard was that people didn’t want any more diversity.  They didn’t want female characters out there.  That’s what we heard, whether we believe that or not.  I don’t know that that’s really true, but that’s what we saw in sales. We saw the sales of any character that was diverse, any character that was new, our female characters, anything that was not a core Marvel character, people were turning their nose up against.  That was difficult for us because we had a lot of fresh, new, exciting ideas that we were trying to get out and nothing new really worked”.

He goes on to clarify what he meant by saying that he heard some people weren’t happy with the false sense of abandonment of the core Marvel heroes. You can read the interview in its entirety here.

Wilson challenged that statement by saying:

“Stories that focus on authenticity and specific experiences can be very successful because it’s not about box checking. It’s about reflecting — as closely as you can in pulp fiction — a real lived experience…stories that can do that successfully tend to succeed with very solid fan-bases, while those that don’t tend to fail and as such their criticism “inevitably becomes about the diversity issue when the real cause may be diversity done poorly.”

She’s right on the money with that one! Read up on her full interview with Laura Hudson here.

This high-spirited teenage girl from the suburbs of Jersey City, N.J. is the biggest fan of the Avengers, and on A-Day she gets to meet them. Being a fan-girl of the Avengers isn’t a new story element for the game either, it’s part of her origin story from the comics.  In the game, A-Day is when [human] civilians are invited to a presentation on new technology by the Avengers, and lucky contest winners who authored their own fan-fiction stories of The Avengers get picked by them to be part of the ceremony and even meet the team themselves.  Obviously things go wrong and The Avengers attempt to save the day but fail. Lives are lost, as well as trust. Now, it’s up to young Kamala to find a way to reunite them. This is also when Kamala gained her polymorphic abilities. When all hope is lost for the team, she becomes that new spark of light in their very dark tunnel. She shows them that the “impossible” is very much so…possible!

There’s a Ms. Marvel in All Of Us

One can conclude that this is the very purpose that she serves in the Marvel universe. Think about it for a minute. A teenage Muslim girl from Jersey City who at times is unsure of herself, somehow and some way, becomes a beacon of light AND inspiration for almost everyone. Including the very heroes she looks up to, that have at times escaped the clutches of death itself! Being a young hero(not even 10 years in comics) has already solidified herself as one of the greatest in Marvel history. The lesson here: Anything. Is. Possible. 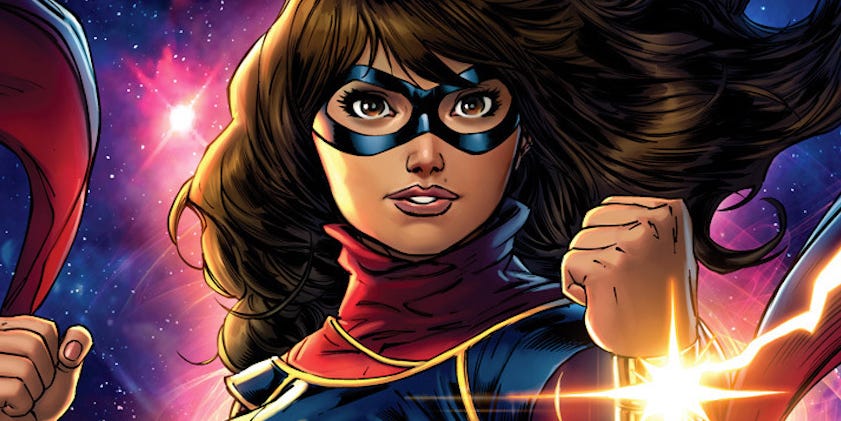