‘Palm Springs’ and the Other Flawless Kate Bush Needle Drop 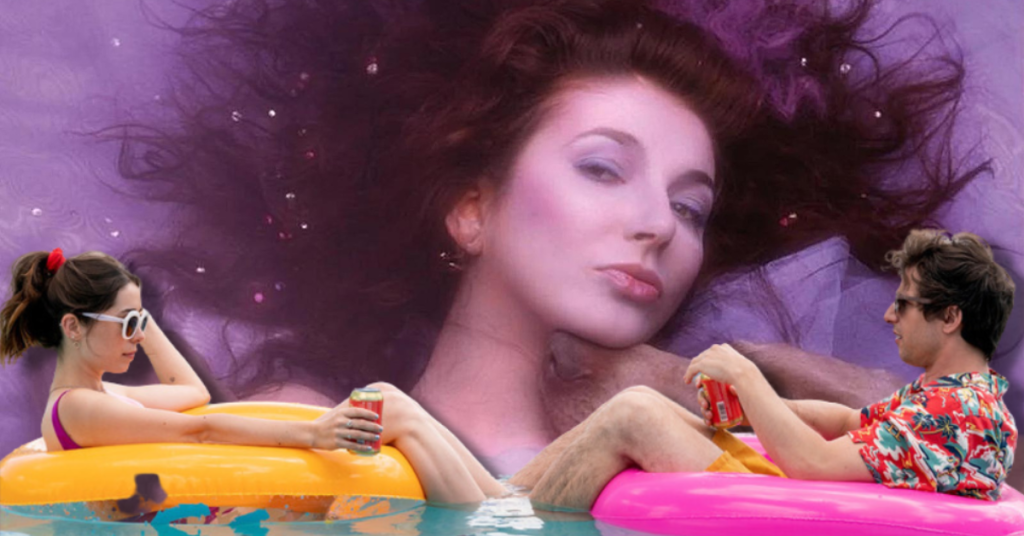 It’s been over 35 years since Kate Bush released her fifth album “Hounds of Love.” Thanks to Stranger Things season four, the lead single from that album has rocketed up the global charts. Yes, “Running Up that Hill (A Deal With God)” is currently so popular that some reports suggest Bush has raked in upwards of $500,000 in royalties since Stranger Things dropped its season roughly a month ago. We can collectively go back and forth for ages on feelings about so many people discovering Bush through the show, but my position remains that the deployment of the song in the episode “Dear Billy” is a flawless needle drop. It also reminded me of another recent if less wave-making Bush usage: the sonic perfection of “Cloudbusting” in Palm Springs.

For anyone who might have missed a movie in the running for best comedy of the last 10 years, Palm Springs debuted on Hulu in July 2020. The sci-fi-inflected romantic comedy stars Andy Samberg and Cristin Milioti as wedding guests trapped in a time loop. Samberg plays Nyles, the first person stuck in the time loop. He’s a plus one who achieves a sort of dark acceptance of his situation. We enter his circuit when he and Milioti’s Sarah, sister of the bride, hook up in the desert surrounding the ceremony. They’re interrupted by the vengeful Roy (J.K. Simmons) who attacks Nyles. As a result, Sarah wanders into a cave that zips her into the time loop with Nyles. Over the next hour, the two grapple with existential ideas about life and existence while gradually falling for one another.

Carrying on the Groundhog Day legacy, Palm Springs is that pristine mix of broad comedy and heady philosophy. It also features one of the most banging soundtracks this side of Goodfellas. Hall and Oates. David Bowie. John Cale. Leonard Cohen. And, yes, Kate Bush. Each addition to the arsenal pairs echoes thematic resonance and deft usage in the story world. The opening credits and first scene play out underneath Demis Roussos’ “Forever and Ever,” a romantic and lilting pop ballad that both establishes the tone for the initial wedding setting and offers a tongue-in-cheek nod to the soon-to-be-discovered time loop. Later, John Cale’s “Barracuda” drifts in over a montage of Nyles and Sarah playing around. Topically, it’s an acoustic jam that matches the hangout vibes. Lyrically though, Cale sings “Cold cost is the death of nothing / Slipping just like nothing did.” In short, dread percolates under the bopping melody.

The best of the crop though is when Bush zings in for the climax. After drifting apart because of Nyles’, surprise surprise, nihilistic view of their predicament, he and Sarah reunite. Nyles delivers my personal pick for best romantic comedy speech and Sarah accepts. They then link hands and walk into the cave. Sarah says she loves Nyles before they detonate a bomb. They believe the explosion will propel them through the time rift and back into normalcy. “Cloudbusting,” which is another hit from “Hounds of Love,” fades in just before they turn to walk towards the cave. Bush’s string-heavy orchestration and trademark whispery vocals swell until they cut off in time with the explosion. It’s not even a minute of air time, but the song offers multiple layers that necessitate its inclusion.

First off, Bush’s composition and songwriting muscles mean she has arguably never written a bad song, and “Cloudbusting” absolutely slaps. Those early pulsating cellos that accompany her vocals provide a steady and comforting baseline. Sonic consistency for a scene in Palm Springs that is all about accepting a crazy idea, the moment when two characters accept potential death because of shared love. The strings strobe in a way that eschews syncopated stressors for driving reliability. Bush’s voice is strong but warm. She opts for long phrases punctuated by clear statements, fitting for a scene about love and its declarations. One of these phrases is “And you’re just in reach,” which hits as Nyles and Sarah are finally within reach. All of this leads to a crescendo for their kiss, an ideal emphatic period before the boom.

That would all be enough to add the “Cloudbusting” needle drop to the hallowed halls of iconic song choices. Considering the song’s inspiration knocks it up another notch. Bush read Peter Reich’s memoir A Book of Dreams which detailed his relationship with his father Wilhelm, a famous psychologist and philosopher. The song’s title refers to a process for rainmaking that Wilhelm developed, specifically a machine he called a “cloudbuster.” Peter’s memoir focuses on the loss, grief, and pain he felt when his father was arrested, as well as the broad disparagement from colleagues his father always faced. Regardless of your feelings on the invention of it all, Peter and Wilhelm’s story of a relationship made difficult because of uncontrollable forces underscored by a yearning for love and connection. What could be more fitting for the climactic reunion of two lovers before undertaking an unhinged experiment?

It’s the attention to all that detail that makes Palm Springs including “Cloudbusting” at that moment work so flawlessly. Needle drops can be overly obvious or derivative in a way that undercuts their usefulness. Think every time David Bowie’s “Starman” gets thrown into a space sequence just for kicks. Understanding that Nyles and Sarah required a song that grappled with their particular metaphysical entanglement is a stroke of genius from the Palm Springs team. And so, if you’ve added “Running Up that Hill (A Deal With God)” to all your playlists and keep revisiting the scene from Stranger Things, I humbly offer the suggestion to revisit Palm Springs (or watch for the first time!) and add “Cloudbusting” to all your queues in its honor.