‘Pirates Of The Caribbean: The Curse Of The Black Pearl’ 4K UHD Blu-Ray Review – Thrilling Debut Entry Is Still The Most Fun 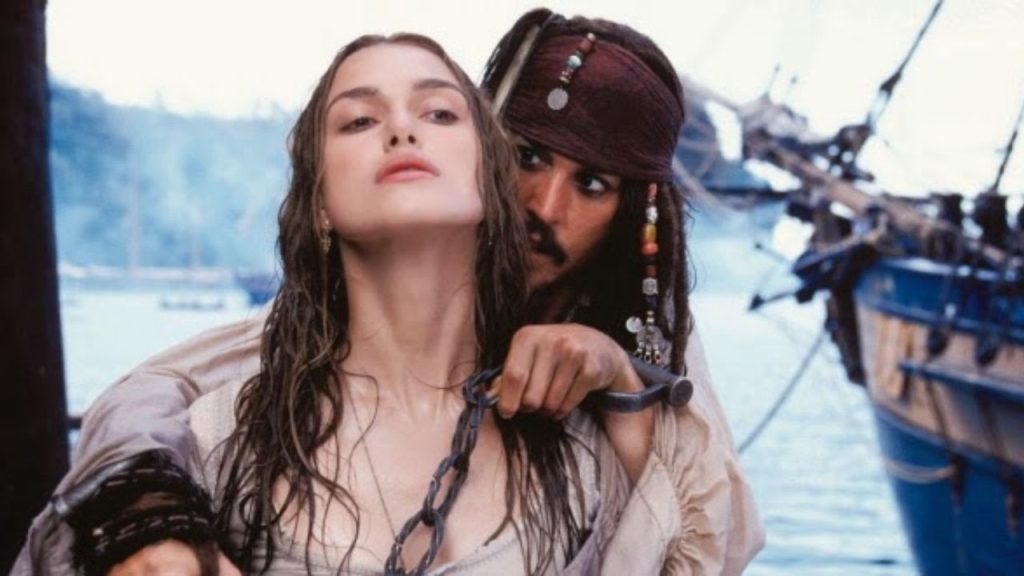 The roguish yet charming Captain Jack Sparrow’s (Johnny Depp) idyllic pirate life capsizes after his nemesis, the wily Captain Barbossa (Geoffrey Rush), steals his ship, the Black Pearl, and later attacks the town of Port Royal, kidnapping the governor’s beautiful daughter Elizabeth (Kiera Knightly). In a gallant attempt to rescue her and recapture the Black Pearl, Elizabeth’s childhood friend Will Turner (Orlando Bloom) joins forces with Jack. What Will doesn’t know is that a cursed treasure has doomed Barbossa and his crew to live forever as the undead!

For thoughts on Pirates Of The Caribbean: The Curse Of The Black Pearl, please see my previous conversation here. 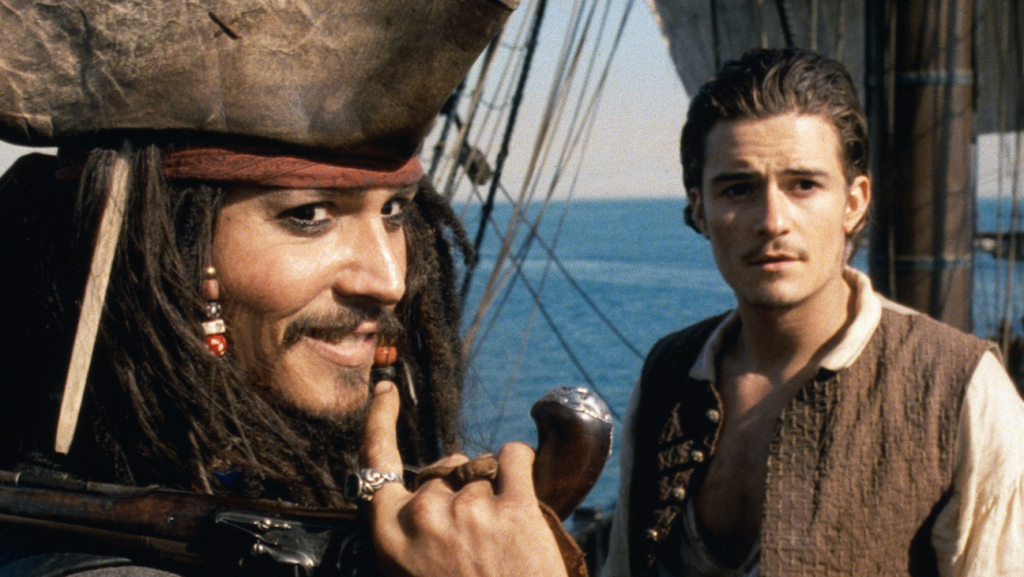 Pirates Of The Caribbean: The Curse Of The Black Pearl debuts on 4K UHD Blu-Ray with a pretty unsightly 2160p/HDR transfer sourced from the same master as the one streaming on Disney+. When compared with the accompanying older Blu-Ray from over a decade ago, the 4K disc does not offer the improvements you would expect. In fact, much of the time the Blu-Ray actually looks better than the new 4K UHD Blu-Ray. To start out with the positives, white levels are more stable without veering into blooming which helps in the sun-drenched scenes. Black levels are much deeper and eradicate some of the crush found on the Blu-Ray which allows the picture to maintain a good amount of depth and detail in darker environments. Despite these improvements, the UHD disc contains an HDR grade that is way too dim compared to the vibrant, albeit occasionally blown-out, Blu-Ray disc. This is one of the most visually stunning films in the live-action Disney catalog, and it is a shame to not have more nuanced color.

Where the picture goes to hell is in the horrendous digital processing and DNR that makes everything look artificial and waxy. Almost completely gone is the beautiful film grain in favor of an image that has been scrubbed free of detail. There has been some artificial grain included, but it looks clumpy and far from naturally resolved. Facial details have been robbed of nuance and many scenes appear as if you have the motion smoothing setting turned on with your television. By and large, this transfer is very disappointing and stands as one of the biggest misses from Disney. With a more natural base master, it could have been significantly better like this particular title deserves.

The 4K UHD Blu-Ray disc comes with a decent Dolby Atmos presentation that needs to be turned up beyond normal listening levels to enjoy. Those familiar with Disney’s output will be prepared for the lack of a true sonic assault that you may want. The track offers some immersion into the environment so that you do get nice detail in the surround channels. The Atmos presentation takes advantage of the expanded channel allotment with height channels supporting the rest of the mix rather than carrying the main load. All of the sounds are balanced well during the action sequences from clanging swords to cannonfire. The many fights and other such hard-hitting moments provide a steady amount of activity in the low end. Directionality of sound is never an issue with this track, and dialogue is reproduced with supreme clarity. Speakers remain engaged throughout the film, even during the quieter moments. The iconic score slightly lacks the power you want to get your fired up for a swashbuckling tale such as this. Overall, the audio presentation is pretty good but could be more complex. 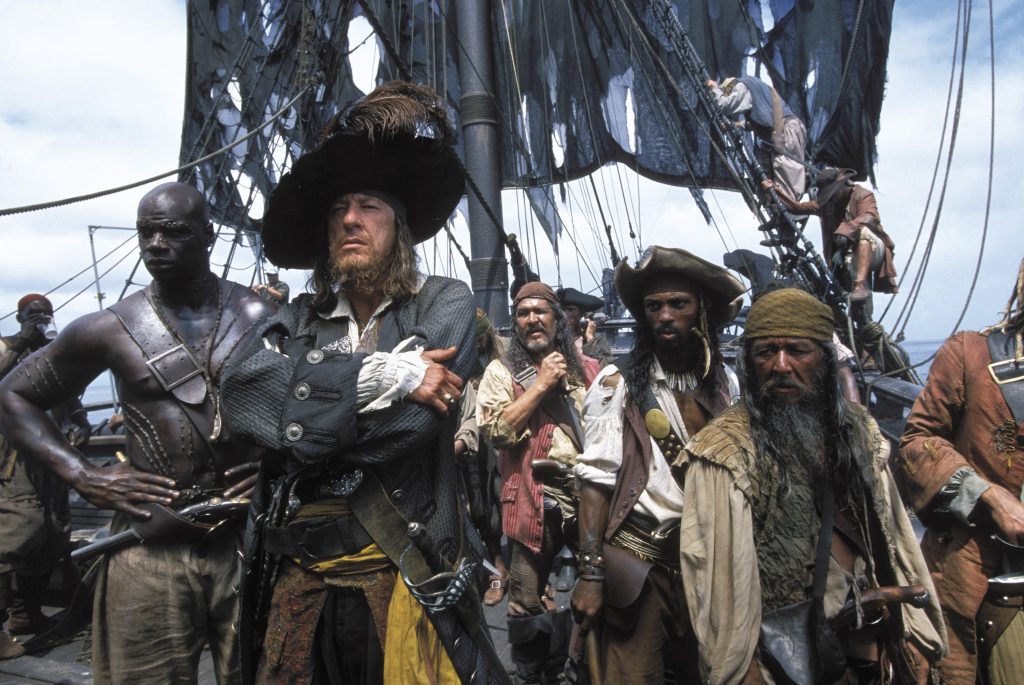 Pirates Of The Caribbean: The Curse Of The Black Pearl is one the most fun and exciting live-action Disney films of all time. The steady stream of thrills and intrigue keep you glued to the screen each time, and the performances are finely tuned to suit this material. The remainder of the series has been a mixed-bag in terms of quality, but this initial entry delivered something truly special. This is what makes the fact that the new 4K UHD Blu-Ray is a disappointment especially hurtful. The A/V presentation is among the poorest we have seen from the format, and the lack of the second disc of special features means that fans will be missing out on a lot of great content if they do not keep their old Blu-Ray. If you already own the previous Blu-Ray, it is hard to make a case for why you need this new release.

Pirates Of The Caribbean: The Curse Of The Black Pearl is currently available to purchase on 4K UHD Blu-Ray and Digital.

Disclaimer: Walt Disney Home Entertainment has supplied a copy of this disc free of charge for review purposes. All opinions in this review are the honest reactions of the author.